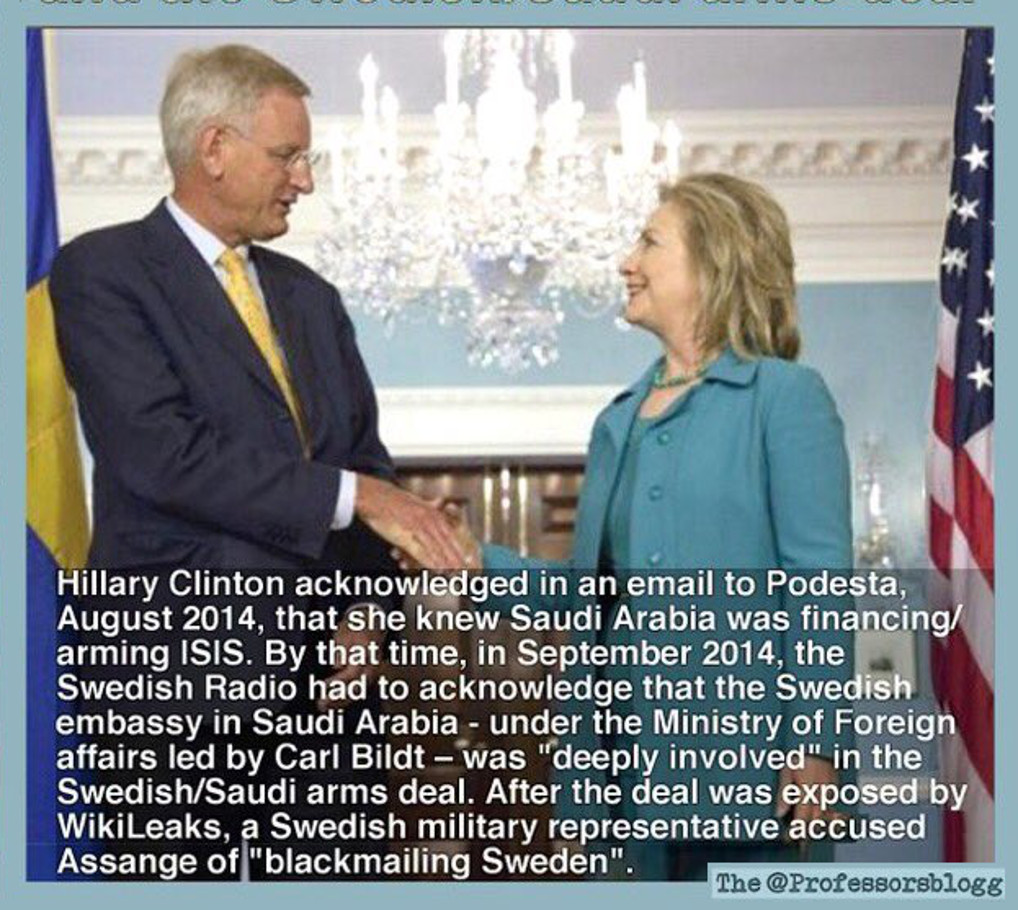 By Prof. Marcello Ferrada de Noli, Chairman, Swedish Doctors for Human Rights. This article is the continuation of “Sweden’s unethical – and unlawful ­­– arms deals with ISIS-backing Saudis“. Sweden now deepens arms deals with Arab dictatorships, this time with the United Arab Emirates – which anew constitutes a questionable state-behaviour from the perspective of […]

This article is the continuation of “Sweden’s unethical – and unlawful ­­– arms deals with ISIS-backing Saudis“.

Sweden now deepens arms deals with Arab dictatorships, this time with the United Arab Emirates – which anew constitutes a questionable state-behaviour from the perspective of ethics and the law.

WikiLeaks Podesta-series has demonstrated that Hillary Clinton knew, at least since 2014, that U.S-ally countries in the Arab world were funding ISIS. [1] At that time, when the geopolitics of Carl Bildt’s Sweden had clearly began its turn towards NATO, Sweden began negotiating in secret with Saudi the establishment of a Swedish arms factory in Saudi Arabia for the production of “weapons of point” – the type used by ISIS and al-Nusrah Front in Syria and Iraq. [2]

The Swedish-Saudi arrangement matched perfectly Hillary Clinton’s doctrine of pushing –politically and militarily – the destitution of secular Arab governments and its replacement with fundamentalist dictatorships. Besides, according to the testimony given by US Senator Richard Black, “Hillary Clinton, as secretary of state, put into place a series of actions to overthrow the secular governments in the Middle East and to replace them with radical Islamic regimes. Why she was doing this? I know she has great connections, financial and otherwise, with Saudi Arabia, with Qatar, with Kuwait, with tyrants of the Arab world”. [3] Who these other tyrants would be? Again, Sweden gives the answer.

A recent report in main newspaper Svenska Dagbladet (SvD) details that the governmental Inspektionen för strategiska produkter (ISP) has given the approval to the Saab Group to begin the bid-process with the United Arab Emirates for the export of the sophisticated air weapon system “GlobalEye”. [4]

The Saab Group owns by Investor, a holding company of the Wallenberg family. As recently reported by The Indicter, Marcus Wallenberg, the Investor’s CEO, accompanied the Swedish Prime Minister Stefan Löfven during the official visit to Saudi Arabia last week. [1]

The stance of the Swedish governmental “Inspection for Strategic Produces” shall be regarded not only as cynical, but flawed in its ground. The Swedish “GlobalEye” weapon system is devised for aerial raids, to counter arrest enemy anti-aircraft fire. Here below is the description found in Wikipedia:

In concrete, the United Arab Emirates is a main participator in the Saudi-led aerial bombardment of Yemen. The weapons to be supplied by Sweden are to be used in the ongoing coalition aerial-raids against the people of Yemen. It is worthy to mention that an academic survey, whose summary was published in The Guardian, established that in these air raids one third of the targets turn out to be civilian targets such as schools, hospitals, markets, etc. [6] How could the Swedish authorities ever expect that their collaboration with such a blunt crime against the human rights could pass unnoticed by the international opinion?

A variety of reports found in Western media also expose an alleged participation of the United Arab Emirates in the financing of ISIS. For example, as published in a NBC News report, U.S. Navy Admiral and NATO Supreme Commander James Stavridis includes indirectly the United Arab Emirates as one of the countries in where cash flow from ‘private donors’ has gone to ISIS, as well as to the al-Nusrah Front – ‘al Qaeda’s affiliate in Syria’. [7]

Professor Michel Chossudovsky from the Centre for Resarch on Globalization has quoted the following: “The most important source of ISIS financing to date has been support coming out of the Gulf states, primarily Saudi Arabia but also Qatar, Kuwait and the United Arab Emirates,” (According to Dr. Günter Meyer, Director of the Center for Research into the Arabic World at University of Mainz, Germany,  Deutsche Welle).” [8] Nevertheless, the UAE has taken in 2015 public stance in fighting ISIS,  as the country even offered ground troops to combat ISIS forces in Syria.

The synopsis given by Amnesty International on the United Arab Emirates shows a government whose stances are the diametric opposite to those publicly declared by the government of Sweden [see box above]. Why would Sweden deny these flagrant breaches to the human rights? Why would Sweden twits own legal provisions in order to do sell weapons to Saudi Arabia and now to the United Arab Emirates?

One explanation is that, from the times of Carl Bildt, the geopolitical stance of Sweden has been drastically transformed to accommodate it to the US strategy in the region. In spite that the principled Foreign Minister Margot Wallström displayed time ago some efforts to keep the relations with the Arab dictatorships within the context of human rights, what at the end prevails in the Swedish government is their subservient position towards a geopolitics dictated by the White House. In these regards, the staunch support that Swedish political elites, and the state-owned and stream media they control maintain towards the presidential candidacy of Hillary Clinton, would be a most plausible explanation.

[8] Prof Michel Chossudovsky, “Going After” the Islamic State. Guess Who is Behind the Caliphate Project?“. Global Research, 12 September 2014.