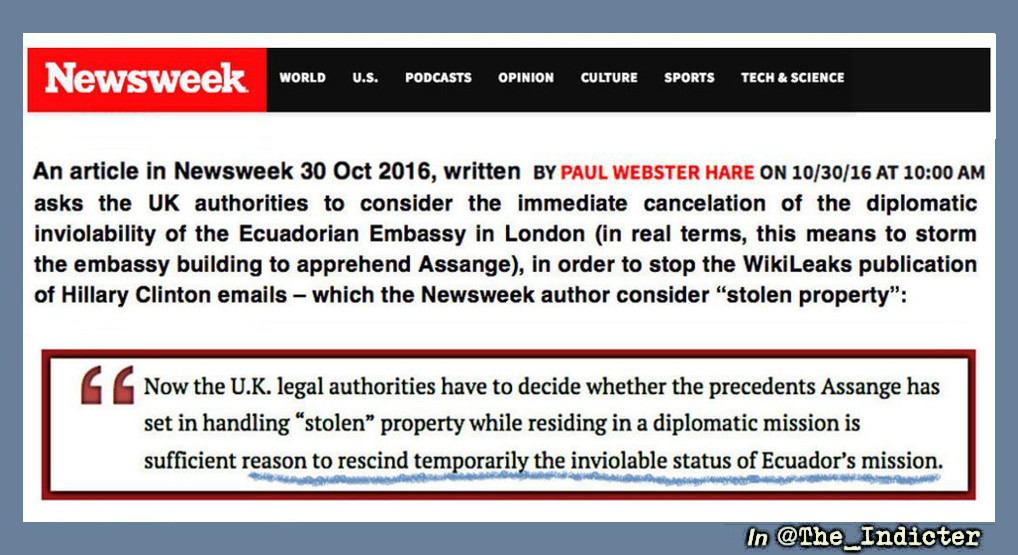 By Prof Marcello Ferrada de Noli, Chair, Swedish Professors and Doctors for Human Rights. A Newsweek op-ed article authored by Paul Webster Hare, “Assange And Wikileaks Make a Mockery of the Diplomacy They Enjoy” – also published in other media, e.g. UPI Top News – [1] asks the UK authorities to consider the suspension of […]

A Newsweek op-ed article authored by Paul Webster Hare, “Assange And Wikileaks Make a Mockery of the Diplomacy They Enjoy” – also published in other media, e.g. UPI Top News – [1] asks the UK authorities to consider the suspension of the diplomatic inviolability of the Ecuadorian Embassy in London in order to stop the WikiLeaks publication of Hillary Clinton emails. Webster Hare, a lecturer at Boston University, concludes after his plea:

It appears quite odd that this author, at the same time that as he profusely cites the Vienna Convention on Diplomatic Relations, ignores its Article 22, § 1, which refers to the agreement signed by UK and other 60 countries that the premises of the mission shall be inviolable:

“§ 1. The premises of the mission shall be inviolable. The agents of the receiving State may not enter them, except with the consent of the head of the mission.” [2]

In his article the author advocates for rescinding the applicability of the Vienna Convention in the case of Ecuador’s diplomatic mission. He adduces that WikiLeaks – and in particularly Mr Julian Assange whom all over the text is equated with that organization – has “stolen property” (the files containing Hillary Clinton’s emails). What the Newsweek article does not mention is that WikiLeaks is only publishing the material they receive in its journalist endeavour; WikiLeaks does not obtain the material through active ‘hacking’.

Secondly, the Newsweek author is utterly wrong in imputing that the Republic of Ecuador or Mr Assange is in violation of stipulations within the Vienna Convention on Diplomatic Relations – by mis-interpreting Article 41, § 3. That article reads: “premises of the mission must not be used in any manner incompatible with the functions of the mission as laid down in the present Convention or by other rules of general international law…”. But the truth is:

1. The government of Ecuador has not engaged in any interfering activities towards the US presidential election via their embassy in London.

2. Likewise Mr. Assange, and the WikiLeaks organisation, also did not engage in publishing activities concerning emails of a candidate to the US presidential election from the Embassy of Ecuador despite Julian Assange residing there.

On October 24, 2016 WikiLeaks clarified that their publishing occurs from the countries that host their servers, Ecuador does not host any of the WikiLeaks servers. [3]

The article in Newsweek, as most articles in mainstream Western media that are staunch supporters of Ms Clinton’s candidacy and the geopolitical stances she represents, do not treat the main issues in the context of:

a) whether the published Clinton’s emails kept on privateservers are a matter of state-secrets or of national security,

b) whether the contentof the revelations provide evidence of corruption in relation to, for instance, Hillary Clinton, The Clinton Foundation, and the DNC administration, or

c) whether the revelations done by WikiLeaks refer to true facts–which should be the paramount concern of the analyses, instead of solely focusing on WikiLeaks as the messenger, or in how the material was obtained and by whom.

Furthermore, accusing Mr Julian Assange of “theft” is not the only libel in the Newsweek article. Webster Hare also declares that Assange has been charged of a crime in Sweden:

And the spinning goes on:

The TRUTH is: In spite of the Swedish extradition request which, in my opinion, mounted in a legal ‘charade’, Ecuador granted asylum because of a documented risk of extradition to U.S.  [5]

Finally, the Newsweek article presents as ‘conclusive evidence’ an issue which is only under investigation phase; hence not clear if it will be dismissed after the US presidential elections; namely, Hillary Clinton has repeated the claim that a conspiracy exists between Russia and Assange against her candidacy:

The TRUTH is: The Newsweek author links to a CNN article which in turn quotes one mysterious source (“one US official”) who said that “US intelligence officials are still investigating”; meaning, there is no conclusive evidence as purported by Hillary Clinton – and echoed by the Newsweek’s author Webster.

The Newsweek author’s proposal to the UK authorities constitutes a wrong interpretation of the Vienna Convention on Diplomatic Relations. As it was shown above, the article is libelous towards Mr. Assange, and, in the opinion of Swedish Doctors for Human Rights, it represents an action against both the human and political rights of Mr Assange. Finally, the article’s main proposal, calling on the UK to suspend diplomatic immunity to Ecuador over WikiLeaks’ publications, is against the very notion of what it means to be a principled principled publisher or journalist.

[1] Paul Webster Hare, “Assange And Wikileaks Make a Mockery of the Diplomacy They Enjoy”. Newsweek, 30 October 2016.

[3] WikiLeaks Editorial Board statement on the status of Julian Assange, Ecuador and the US election, 23 October 2016.

[4] M Ferrada de Noli, “Mr. Julian Assange has never been charged of any crime. The powers behind the hunt of WikiLeaks.” The Indicter magazine, 17 September 2016.