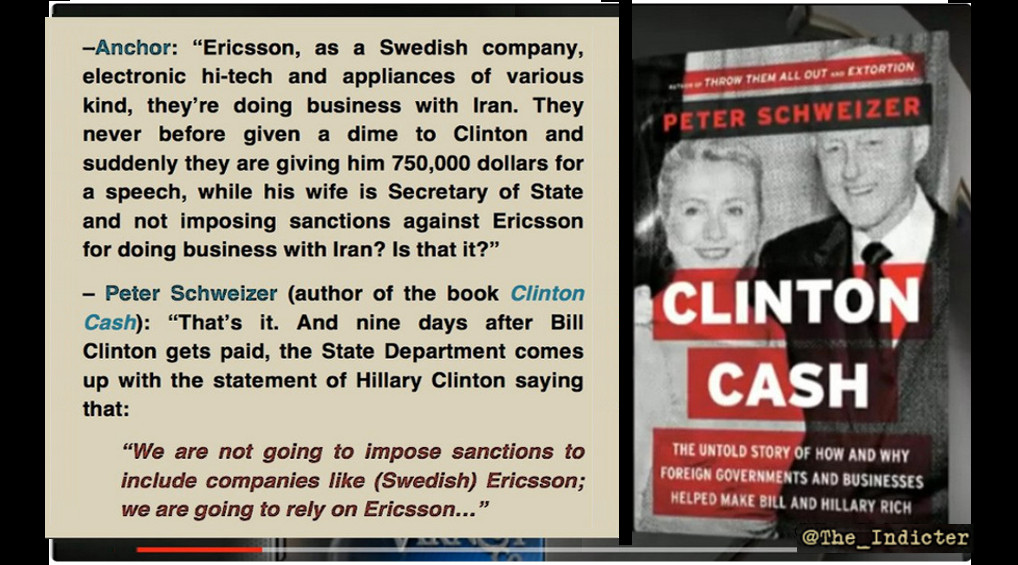 By Prof Marcello Ferrada de Noli, Chairman, Swedish Professors and Doctors for Human Rights. Summary: Ensuing a brief characterization of ties maintained between Sweden and the Hillary Clinton-led US Department, and summarily reviewing the Swedish political and media consensus on this and related issues, I present a list of Swedish state-owned and private companies contributing […]

Summary: Ensuing a brief characterization of ties maintained between Sweden and the Hillary Clinton-led US Department, and summarily reviewing the Swedish political and media consensus on this and related issues, I present a list of Swedish state-owned and private companies contributing in the monetary transactions of the Clinton Foundation. The question is whether these were always ‘donations’ from the Swedish government, or corporations, or whether they were an exchange for favors that resulted in investments for both sides.

One illustration of the geopolitical/financial quid pro quo arising between the Swedish donors and the Clinton Foundation (or US State Department at the time) is provided by the deal represented by the giant Swedish company Ericsson. The company Ericsson paid nearly six million dollars to Bill Clinton for one speech, and, coincidentally, the US government excluded Ericsson from the list of companies banned for doing business with Iran.

Another main ‘donor’ is the Lundin Foundation (Lundin Oil). The Lundin Oil Company, where Carl Bildt was a board member 2000-2006, operated mining exploitation in South Africa in spite the UN boycott against the apartheid regime [See “A Nigger is a Nigger and a Swede is a Swede…“]. Adolf H. Lundin was once asked if he would have done business with Hitler, he replied, “That I certainly would have done.”  Adolf H. and Mrs Lundin were first-row guests at the White House in an older presidential installation.

The Clinton Doctrine and Sweden

The collaboration of the Swedish state and Swedish corporations with the Clinton Foundation and in particular with Hillary Clinton, is probably the largest in Europe considered per capita. It is not a purely monetary or financial connection. It is above all an ideological allegiance to the ex secretary of State geopolitical agenda. One illustration would be what – for instance in Middle East contexts – we have called the “Clinton doctrine”; namely, the strategy deployed by Hillary Clinton towards the replacement of secular governments by fundamentalist Islamic dictatorships.

For those endeavours it has been required arms dealing and providing, financing and training – directly or by proxy – towards the forces designed by the US agencies to depose the targeted secular regimes. [See in The Indicter, “Sweden’s unethical – and unlawful ­­– arms deals with ISIS-backing Saudis“, and “New Swedish arms deal with UAE will help bombing Yemen – Sweden following H. Clinton’s doctrine“]

There is nowadays a general consensus that the above was the modus operandi by which ISIS started, or Kaddafi succumbed, or the Yemen and Syria wars are now waged. Eventually, Hillary Clinton has admitted, “The people we’re ‘fighting’ today, we funded twenty years ago.”

Whether the initiative for this geopolitical agenda has been the initiative of Clinton, or vice versa, it was the implementation by the State Department of a design attached to state-donors and their respective country corporations, it is difficult to assess. Nevertheless, regarding countries in the Middle East, we have the testimony of Senator Richard Black on video [Click on image below for the video clip], which explains the government-shifts in the area on the great connection, “financial and otherwise”, of Hillary Clinton “with tyrannies of the Arab word.” The donations from Arab countries have consisted mainly from Saudi, Qatar and Morocco royal houses.

Sweden, for its part, has been a devoted instrument in the implementation of the formerly (Clinton’s) US department enterprises, militarily included. Eventually, the full defense strategy of Sweden was changed under the Reinfeldt/Bildt government, where the army was converted in a battalion-system to mainly operate in occupation wars under US-military lead. This was the case of Afghanistan. As one of the very few countries still contributing with troops placed under US-command in Afghanistan, Sweden was the only country which complied with the request from the US to the governments participating in the Afghanistan occupation to initiate a prosecution of the WikiLeaks founder Julian Assange, in August 2010.

Not to mention Clinton’s initiative of a no-fly zone in Libya, and bombing of the Libyans, which was implemented with participation of the Swedish air force. A striking feature – typically Swedish – was that all the established political parties, including the former communists [now the Left Party (Vänster)], approved in Parliament the Clinton proposition that was presented to them by the FM Carl Bildt. Only the Sweden Democrats, a small party at the time, opposed the participation of Sweden in the Libya military operation.

The organization WikiLeaks has not only published the ‘Diplomatic Cables’ which referred to activities of a variety of embassies under Clinton’s official leadership, including the Stockholm mission but also the exposures of the secret Intel agreements – on the back of the Swedish Parliament – between US agencies and the Swedish government. It should be also mentioned that several Swedish politicians, both from the right-wing (such as Carl Bildt) as well the center-left social democrats (such as the current Parliament speaker Urban Ahlin) figured prominently in the Diplomatic cables disclosures regarding their secretive talks with the representatives of Clinton’s State Department.

WikiLeaks also contributed to the exposures of a secret arms deal between Sweden and Saudi Arabia: FOA, an institution directly under the Swedish ministry of defense and in close interdependence with the Swedish arms industry; The cover Swedish activity was also initiated about the time Hillary Clinton was US State Department Secretary and the secret planning consisted in the construction of an arm factory in Saudi Arabia. It was for the production of “weapons of point”, of the type used by ISIS forces against the Iraq or Syria armies.

And finally we have the Swedish media, an important factor in the pro-Clinton collaboration done in detriment of Sweden’s national interest.

The Swedish media, from the perspective of ownership, can be characterized as a plain monopoly: partly the state-owned monopoly (Swedish TV and Radio) and the two monopolies in control of most private stream media (Bonniers and Schibsted groups). A principal issue is that Swedish journalists, regardless in which state or private monopolies they are employed, have in the main a consensual, uniform and journalistic production characterized by a cultural e ideological subservience to the US interests represented by the Hillary Clinton ideology. Although this phenomenon was already evident during the trial by media against Julian Assange in Sweden, it has also portrayed the phobic media stances against Russia, exacerbated after the US-led putsch in Ukraine. This was an event in which the Swedish FM of the time, Carl Bildt, participated, instigated and vividly defended in Sweden. The Swedish media simply followed suit. And now of course the Swedish mainstream media are “all against Trump”.

Sweden and the Clinton Foundation

The Clinton Foundation has currently its own enterprise in Sweden, where funds are collected even directly, through being a recipient of the Swedish Postcode Lottery (Postkodlotteriet). The Swedish Clinton-institution is called the William J. Clinton Foundation Insamlingsstiftelse, and according to Washington Post, this Swedish entity “was never disclosed to or cleared by State Department ethics officials, even though one of its largest sources of donations was a Swedish government-sanctioned lottery.”

The contribution made by the Swedish International Development Cooperation Agency (Sida), a governmental organization under the Ministry of Foreign Affairs, has a special significance, because that collaboration will continue at least until 2019, regardless the destiny the Clinton Foundation as such. Namely, the Swedish International Development Cooperation Agency donates to Clinton Health Access Initiative (CHAI), where in its board of directors is found both Chelsea and Bill Clinton. The Board of directors chair is Bruce Lindsey, which is also member of the board in the Clinton Foundation.

The Swedish International Development Cooperation Agency entanglement with the Clinton’s CHAI began in 2011. The Swedish state agency has paid to CHAI 150 million SEK. Another 75 million SEK have been promised.

The Lundin Oil Company has been reported as having a sinister record in its Africa operations. The International Public Prosecution Office in Stockholm opened in 2010 a criminal investigation regarding Lundin Petroleum’s operations in Sudan.  In concrete, the investigation refers “crimes against humanity in Sudan 1997-2003.”

Sweden’s largest bank, Swedbank, has retained its partnership with Clinton Global Initiative (CGI), a part of the Clinton Foundation. Both Ericsson and Swedbank have paid to CGI annual membership fees of 20,000 dollars. The Omvärlden report mentions that through its partnership med CGI, Swedbank’s wealthier clients had the opportunity to invest in the projects of CGI.

In these exchanges between Sweden and the Clinton Foundation –as we saw above, with participation of both state and corporate ‘donors’– the catch for Sweden has been a) privileged treatment by Hillary Clinton’s State Department towards Swedish companies (e.g. the case of Ericsson, that could continue having profits in Iran), and b) the support of Clinton’s State Department to Sweden’s positions at international forums. One illustration of this is the active support displayed by the US State Department in favor of Sweden’s candidacy to a seat  at the UN Human Rights Council in 2012. In spite of this support Sweden was not elected; in fact, Sweden received the lowest number of preferences in the voting.

“A nigger is a nigger and a Swede is a Swede”. Top leaders of Sweden’s second largest party stating position on Mandela’s struggle against apartheid“

“Analysis: Snowden document reveals Swedish prosecution of Assange was requested by the U.S.”