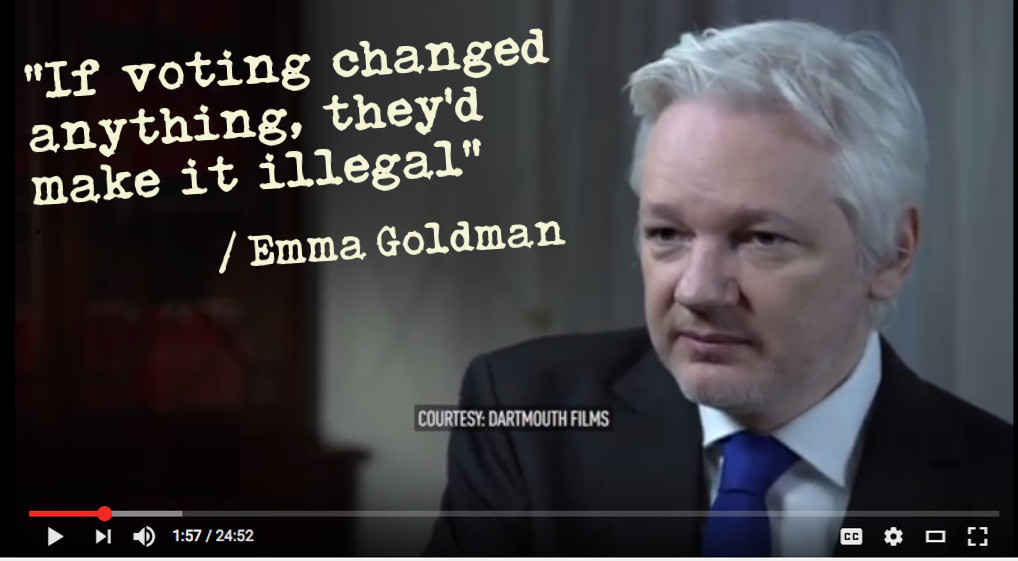 By Dr. Nozomi Hayase PhD, member of The Indicter Editorial Board. Click on the image for the John Pilger interview with Julian Assange The U.S. political charade is nearing its finale with the most hated presidential candidates in history rushing to the finish line. At this point, the contest of the greater of two evils […]

By Dr. Nozomi Hayase PhD, member of The Indicter Editorial Board.

The U.S. political charade is nearing its finale with the most hated presidential candidates in history rushing to the finish line. At this point, the contest of the greater of two evils has escalated. An allegation of Trump raping a 13-year-old girl has come forward, while the FBI investigation into Hillary Clinton’s use of private email servers was reopened, along with the Clinton Foundation scandal of accepting millions of donations from foreign countries.

“If voting changed anything, they’d make it illegal”. These words of Emma Goldman have never been more true than with this 2016 presidential election. WikiLeaks’ trove of docs from the private email account of Clinton’s campaign chair John Podesta brought up the big elephant in the room; this illusion of democracy and the role of the Democratic Party in maintaining the façade. Hillary’s paid Goldman Sachs speeches revealed where her loyalty really lies and clearly laid out why a Warmonger neocon like George W. Bush is with her.

‘But Hillary is better than Trump!’ says Michael Moore, who plans to vote for Hillary. This is like saying the Democrats, who undermined and rigged the whole election process and are corrupt to the core are somehow worthy of a vote. As Chris Hedges astutely pointed out in his book “Death of the Liberal Class”, there is no party that represents progressive values. There is no left. Indeed, there is no party on the right either. It has really become just one raucous party for the oligarchs.

In this election sponsored by transnational corporations and billionaires, no matter how independent politicians might appear in this staged democracy, they always come with strings attached. Trump is a phenomena created by the puppet masters behind the scenes, working on the emptiness at the core of American politics to prey on the vulnerable and those repeatedly betrayed by the system.

This can no longer be called speculation or wild imagination. WikiLeaks’ releases showed how the Clinton campaign conspires to “produce an unaware and compliant citizenry” with their strategy to elevate “Pied Piper” candidates like Trump as her primary ‘lesser evil’ leverage for winning. This is just the tip of the iceberg. Anybody who plans to vote for Hillary might want to do some due diligence by reading the summaries of the most revealing Podesta Emails.

What is unfolding now is a scourge against the American people and this election marks the end of this illusion of democracy. Former Black Panther and imprisoned journalist Mumia Abu-Jamal gives an astute analysis on the state of America. Calling it “the ultimate reality show”, he described how this U.S. Presidential election reflects “the fall of empire” and noted that “this is how democracies fall. History repeats itself, first time as tragedy, second time as farce.” Like the fall of the Roman Empire, these two faces on the ballot box remind us of plutocrats drunk with power who have their shaky inept hands close to the nuclear button.

In an interview with John Pilger, WikiLeaks editor Julian Assange noted how he feels sorry for democratic nominee Clinton for being eaten alive and tormented by her own rabid ambition. From the Ecuadorian Embassy, where he has been arbitrarily and unlawfully detained for more than four years, Assange shared insights gained from the DNC emails. He shed light on this hidden network of power, describing how Hillary is its representation, acting the role of a “centralizing cog” that interconnects different interests like big banks and Wall Street, along with people in the Intelligence and the State Department.

Assange pointed to how the most revealing aspect of these emails is that the terrorist group known as ISIL or ISIS has been largely created with money from people with deep financial ties to the Clinton Foundation. He noted how one can’t understand Clinton’s foreign policies without understanding her deep connection to Saudi Arabia, particularly after giving them an $80 billion arms deal.

During the fall of any empire, new powers often emerge. We are already seeing the pipeline of unaccounted power that emanates throughout Washington, where media institutions and justice systems are acting as Clinton loyalists. Once again, this was shown in the Podesta Files as the mainstream media colludes with the Clinton campaign and a senior Department of Justice official, giving the campaign a quiet heads up for legal filings about Clinton’s emails.

Tech giants like Google and Facebook are inside her think-tank. Chief operating officer of Facebook, Sheryl Sandberg was revealed as a Clinton partisan. Also, former Google chairman Eric Schmidt was shown to be directly involved in engineering the success of the Democratic Party.

This power structure didn’t emerge overnight. It has been here for decades. It is just that in the post-November 8 America, the face of this blatant corruption will become more visible. Armed with advanced technological capabilities like drones, mass surveillance and artificial intelligence, this limitless ambition for pursuit of power is expanding around the world to reshape the future of people in the new digital age.

Struggles for democracy are now global. So, any resistance has to transcend borders. While pillars of democratic institutions are failing fast and systems of ‘representation’ abandoning the people, WikiLeaks’ real investigative journalism, which has no allegiance to any country or corporation, has courageously stepped forward to resuscitate the fundamentals of democracy. True democracy requires informed citizens, so it is imperative for all to continuously analyze these documents and digest reality, so to better understand the machination of governance we are under.

Voting is never the end and it is not about who wins. The choices are not Hillary or Trump, nor which party to support. There is no choice, no solution and no changes available in the voting booth of a corporate duopoly-occupied electoral arena. Yet, we must make real choices and solve our very real problems.

It is time to reject this greater evil politics and strike the courage to break the political bond that has connected us to the puppet strings of power. Voting with conscience is not a protest vote. It is our civic duty as We the People, who together are the highest office of the land, to declare the just cause that impels us to this separation. As the theatre of contrived democracy comes towards an end, our decisions made on election day are where our real battle begins.