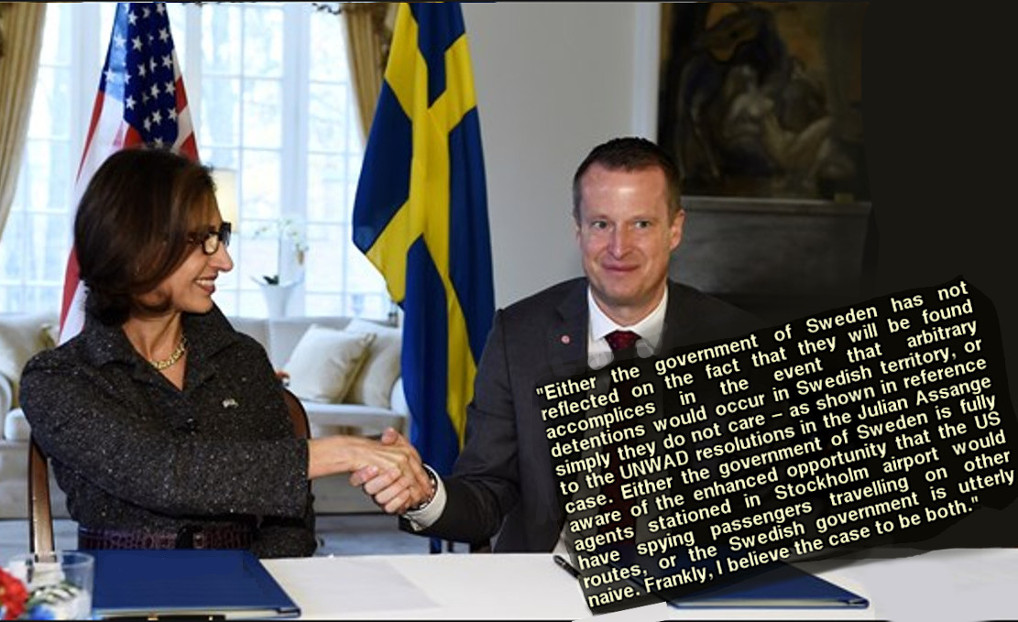 By Prof. Marcello Ferrada de Noli, Chairman, Swedish Professors and Doctors for Human Rights. US Ambassador to Sweden and Swedish Minister of Interior sign the agreement in Stockholm, 4 November 2016: In brief: Sweden is now allowing US Homeland Security to station officers at Stockholm airport on a permanent basis, and with access to their own […]

US Ambassador to Sweden and Swedish Minister of Interior sign the agreement in Stockholm, 4 November 2016:

In brief: Sweden is now allowing US Homeland Security to station officers at Stockholm airport on a permanent basis, and with access to their own weapons. The US “custom and security controls” in Swedish soil are supposed to stop suspected terrorists, which include “cyber-terrorists”, and other individuals suspected of criminal-behaviour – who appear on lists which may also include whistle-blowers and their publicists, who may be considered to have “stolen information”. The Department of Homeland Security declared in 2013 that “the unlawful disclosure of classified information by WikiLeaks in the summer of 2010 has rightfully renewed the Department’s focus on risk management.”

Do you remember the secret co-operation between Swedish government and the CIA, flying refugees from a Stockholm airport and taking them to torture chambers in Egypt? The episode ended in UN sanctions for Sweden, having violated the UN Absolute Ban On Torture.

That kind of clandestine operation is most likely not to happen again in Sweden; at least not at Arlanda Airport in Stockholm. There is no need now for doing such operations undercover. The new agreement Swedish and US governments have signed, publicly, allows for the permanent establishment of US Homeland Security officers as part of the CBS (Customs and Border Protection) at the main Swedish airport. According to the agreement, the CBS agents will have access to their own weapons stored in an iris-opened locker at the Swedish airport.

One remarkable feature of this ‘sovereignty’ affair is that it was Sweden which “submitted a letter of interest to add Preclearance Operations” in the Stockholm airport, already in 2014, according to the official website of the US Department of Homeland Security. According to USA Today, cost-sharing is under discussion with the local authorities in the prospective preclearance countries, on whether they shall do as the United Arab Emirates does, sharing the cost for the US officers stationed at Abu Dhabi airport. In that case payment arrangements would not be the only common feature shared by Sweden and the UAE.

The US officers stationed at Arlanda airport will be housed at a special purpose-build premises that Sweden will construct under US design and/or supervision. The Swedish media is now happily reporting that the construction process will create 280 new jobs. The real purpose of this US Homeland Security initiative in Swedish territory is not explained in Sweden, neither by the government’s press release nor by the media. Furthermore, Mr. Karl Wistrand, CEO of Swedavia, the main state-owned company operating airports in Sweden, highlighted for USA Today solely, that the “introduction of U.S. Preclearance will have a strong positive effect on both foreign investment and Swedish tourism.”

The whole matter is presented in Swedish press, as a standard “custom’s control” process which will help speed up travelling. A NATO media megaphone in Sweden, The Local, uses this headline in its article on the agreement, “Travelling to the US from the Swedish capital Stockholm is about to get much easier”. The Swedish travellers are made to believe that the preclearance system will ease their arrival at the US, as they will be passing US customs in Swedish territory. But this is also a time-consuming procedure not different to the one endured at US airports. So, the only catch for the alienated Swedish public appears to be mainly on a cultural-anthropological level, alas, the feeling that they are a part of the American system. Many in Sweden love America, me too; but if the price Swedes will have to pay is the sovereignty of Sweden – a country profiting of a declared nonalignment geopolitical stance – then they should abstain from any perceived time saved waiting in a queue to save their sovereignty.

In the US media, however, authorities have been perfectly clear about the fact that ‘preclearance’ controls aim to act as a check on terrorist threats. A most interesting piece of information contained in the New York Times article, “Preclearance at Foreign Airports Seen as a Necessity to Fight Terrorism”, is that the system has targeted not only national security issues but also individuals with criminal records, as well as visa matters. The efforts to fight and prevent terrorism constitute of course a laudable purpose, on which the author has no issue whatsoever.

The problem arises though, in the definition-scope of terrorism, and in concepts around whether certain civil-courage behaviours, for instance whistleblowing, are to be considered as criminal activities by the Homeland Security officers. Furthermore, we have the issue of ‘cyber-terrorism’, alternatively referred to as ‘tech-terrorism’. Are journalists and publishers also considered of being “cyber-terrorists” for publishing or referring to ‘intercepted’ or ‘hacked’ materials? For instance, according to US Vice President Joe Biden, Mr. Julian Assange – the founder of the anti-secret publishing organization WikiLeaks – is a cyber terrorist (“a high-tech terrorist”. Click on image below for the video).

The US Patriotic Act together with the CFAA (Computer Fraud and Abuse Act, 1-a) defines specific computer crimes as terrorist attacks. We have to consider these facts against the backdrop of a series of statements by prominent U.S. politicians accusing, implying or equalizing WikiLeaks activities with anti-American “terrorism”.

You may think, on the other hand, that it is not likely that Julian Assange would freely try to pass through the US Homeland Security control premises at Arlanda Airport in Stockholm. But what about the case of any member of the WikiLeaks staff, or any journalist or commentator or lawyer that the US Intel data archives may have listed as a WikiLeaks ‘helper’?

It is interesting that nearly half of the few airports selected by Dept Homeland Security for its preclearance system correspond to cities harbouring whistle-blowers activists or journalists and commentators that are or have been associated with WikiLeaks; such as Keflavik International Airport (KEF) in Iceland, Sao Paulo and Rio de Janeiro in Brazil, and main Italian airports of Milan and Rome. [Photo at right, PM Löfven and Vice President Biden].

Either the government of Sweden has not reflected on the fact that they will be found accomplices in the event that arbitrary detentions (see below) would occur in Swedish territory, or simply they do not care – as shown in reference to the UNWAD resolutions in the Julian Assange case. Either the government of Sweden is fully aware of the enhanced opportunity that the US agents stationed in the Stockholm airport would have spying on passengers traveling back and forth on other routes (than the US), or the Swedish government is utterly naive.  Frankly, I believe the case to be both.

The preclearance initiative is not only inspired but also has its basis on the Patriot Act. With regards to apprehending individuals, even if suspicion has not been well established – let alone the lack of a warrant – the modus operandi for any Homeland Security officer (such as CBC personnel) is similar to the British Schedule 7 of the Terrorism Act routine protocol. This has been used over thousand times per year in the UK. A most notable case was the detention in 2013 at London Heathrow airport of the journalist David Miranda, Glenn Greenwald’s partner; as reported, solely because he was carrying documents for Greenwald.

But while the British police do themselves the work for the Americans, the Swedes allow the Americans to take over Swedish law enforcement in Swedish territory.

A unique case of sacrificing sovereignty

What is going on in Sweden with regards to the US, may be interpreted as a unique case of sovereignty suicidal-behaviour. This has been one uninterrupted de-nationalization process starting with the former government of Carl Bildt, or more exactly, after the assassination of the illustrious PM Olof Palme.

The subservience of Swedish authorities appears clearer and clearer in the arms deals with the Arab dictatorships. These deals, as the author has previously denounced in The Indicter magazine, follow the path or fill the gap of transactions initiated by the Hillary Clinton’s State Department. Against the backdrop of this geopolitical weapons and money laundering, we also find the close collaboration of Sweden with the US Intelligence agencies, the prosecution of Julian Asange requested by the US from Sweden in 2010, and the obstinate refusal of Sweden to comply with UN conclusions while blindly following the dictates of Hillary Clinton’s State Department. Not by accident, and with much shame for all Swedes with a national pride left, Sweden’s main newspaper welcomed President Obama accidental stop-over visit to Stockholm with this eloquent message in its full, front page: “Welcome to little America, Mr President”. [See image below: the images in the Dagens Nyheter of 4 September 2013, with a full display of the American hamburger, the American flag, the American football, and the American Hollywood, all portrayed at the height of greeting the US Obama government by Sweden‘s PM Reindfeldt.].