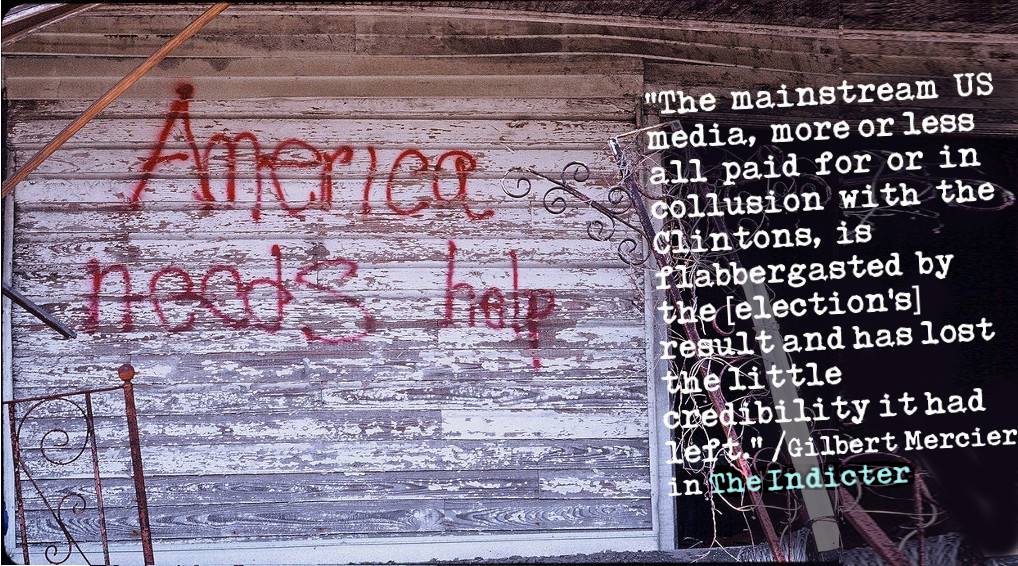 By Gilbert Mercier. Donald Trump’s election is viewed by most on the United States’ left coast and worldwide as a regressive historical anomaly. It has left the political class in Washington, and the rest of the world, in a state of shock. The type of nightmarish hangover that a drunk time traveler would get if […]

Donald Trump’s election is viewed by most on the United States’ left coast and worldwide as a regressive historical anomaly. It has left the political class in Washington, and the rest of the world, in a state of shock. The type of nightmarish hangover that a drunk time traveler would get if he was accidentally taken to let’s say the McCarthy era in the US or to Germany in 1933. Uncertainty usually provokes anxiety, and this is precisely what we are witnessing in this time of history. Trump is an accidental president as he was never supposed to be elected. Case in point: at the early stages of his campaign, the man running it was Tony Podesta, brother of Hillary Clinton’s main handler John Podesta. Trump’s initial function was to be a decoy, a scarecrow and  an ostentatious crude comic relief to ensure Clinton’s election. Almost nobody made the forecast of a Trump victory, but it was however highly predictable as Trump started to personify a populist anti-establishment protest movement: the raw expression of rage from the victims of disaster capitalism.

The miscalculation was that Trump not only likes to compete, he also most of the time manages to win. The mainstream US media, more or less all paid for or in collusion with the Clintons, is flabbergasted by the result and has lost the little credibility it had left. Wikileaks’ Podesta emails disclosures exposed many of them as corrupt propagandists. The problem with propagandists is that they often end up believing their own lies. Of course Trump became their favorite punching bag, but it eventually backfired on them and finally, blew up in their faces. Trump claimed rightly that the US political system is rigged, but his mandate is far from a plebiscite, as Hillary Clinton won the popular vote. Therefore, before his inauguration in January President-Elect Trump must reach out and make peace with the left coast. During this election, the divide between the heartland Bible and rust belt and the rich urban east and west coasts has grown. Trump’s first task should be to rebuild bridges between two cultures hostile to each other. This is imperative, if he is to succeed, but it is, to say the least, an extremely challenging task. How will he reconcile the clash of values between a left coast socially liberal in terms of civil rights and climate change, and a poor heartland economic casualty of globalization living paycheck to paycheck but socially conservative and a proponent of  increased policing?  Some of the names of the political players actively jockeying to jump on Trump’s train for the key cabinet positions give an indication that an olive branch strategy might not be in the forecast to bridge the deep cultural divide of this land.

Is the house of Trump built on quick sand?

On November 8, 2016, Americans rolled the dice and opted for the candidate viewed, rightly or not, as the anti-establishment candidate. The premise is accurate: America is broken, but how to rebuild it is the issue. Trump did start a movement to get elected; it had its slogans “Make America Great Again” and “Drain the Swamp”, but how will they be applied exactly and will they end up in the dustbin of history like Obama’s unfulfilled promises of “Hope and Change”? Slogans are political marketing devices and get people elected by motivating voters, but they are rarely implemented and are certainly not policy indicators. If America dodged the bullet of a potential civil war if the Clintons had successfully rigged the elections and won, the country is divided and bruised. Does Trump have what it takes to be a healer-in-chief? Further, the key campaign slogan refers to an era when America was great, but it never refers to an exact time frame. Are we talking about Abraham Lincoln, FDR, Nixon, or Reagan? If we are talking about the later, I am sure that the president-elect is fully aware that Reagan was merely a figurehead run by Bush Sr. who endorsed Hillary Clinton. Perhaps Nixon could be an interesting model, as he managed to extract the US from the Vietnam quagmire as well as establish foreign relations with China, not to mention create the EPA. President-elect Trump must clarify, as a guideline, when he thinks America was great so we may study that time frame and its leadership.

Trump was elected because he is an outsider, a savvy businessman who has promised to rebuild a land wrecked by globalization and poor management. But now, he has to deal with the traitorous waters of Washington’s insiders.

There is a saying in DC: if you want a friend get a dog. This is why enduring politicians value loyalty above anything else. Cultivating loyalty has its shortfalls, and as it becomes inbred and corrupt it can become borderline criminal. In March 2015 I coined the notion that the two leading US political dynasties, Bush & Clinton, were largely operations like crime syndicates. This idea became very popular with Trump’s core base of the so-called deplorables. The Bushes betrayed Trump during the elections, therefore we’ll find none of their crew in Trump’s cabinet. This also goes for anyone connected with the Clinton crew and their Wall Street sponsors. President Barack Obama  was apparently given a list of Wall Street approved cabinet members before his election in November 2008. One hopes that Mr. Trump will stay away from this type of conflict of interest. It is clear, judging by the way he has run his campaign, that President-Elect Trump will be the boss in the White House. This seems to be exactly what the American people want at the moment, and as the CEO of America Inc. he will hire his own trusted people and won’t have any problem, if needed, with using his famous TV reality show line: “You are fired!”

It appears that former Speaker of The House Newt Gingrich will play a leading role in the Trump administration. Other names are being floated, some of them contradicting the notion of “draining the swamp”. Gingrich has been mentioned for Secretary of State, but this is not apparently what he wants. Another name is mentioned to head the key position of head of the State Department, and it is unfortunately the Bush crew man John Bolton. Bolton, besides being tainted for his role in the Bush administration, has a short fuse, which is not really the best quality for the top diplomat of a country. Robert Corker is also considered for Secretary of State. In my opinion, If Trump wants to depart from US aggressive hegemony foreign policy, and ease the tensions with Russia and China, he should seriously consider Ron Paul for the job.

It is likely that former Mayor of New York, Rudolph Giuliani will become Attorney General, and he is certainly more than qualified for the job. Unfortunately, Trump is considering his friend Steven Mnuchin, formerly at Goldman Sachs, for Secretary of the Treasury. Jeff Sessions is the likely choice for Secretary of Defense. I think that Chuck Hagel should also be considered in some capacity, as well as Paul Craig Roberts who served in the Reagan administration. David Clarke is on top of the list to head the Department of Homeland Security. Perhaps the most disastrous name mentioned, at least for people concerned by climate change, are the names considered for Energy Secretary, Interior Secretary, and EPA: for Energy Harold Hamm, an Oklahoma billionaire who made his fortune in fracking is a shoe-in; Forrest Lucas from Lucas Oil, might become Interior Secretary; and perhaps the most controversial choice of all would be the one of on record climate change denier Myron Ebel to head the EPA. For the sake of bipartisanship and inclusiveness, it might be a good idea to consider someone like Bernie Sanders for either Secretary of Labor or Education. This type of idea would go a long way to unite a divided country.

Last but not least, President-Elect Trump should consider putting pressure on Sweden’s government to drop the manufactured charges against Wikileaks founder Julian Assange, considering that without the release of  Podesta’s emails, Hillary Clinton would have likely been elected. All Americans and the world citizenry should want the Trump administration to be successful. Our common future depends on it.

This article appeared first in News Junkie Post. All photographs by Gilbert Mercier.