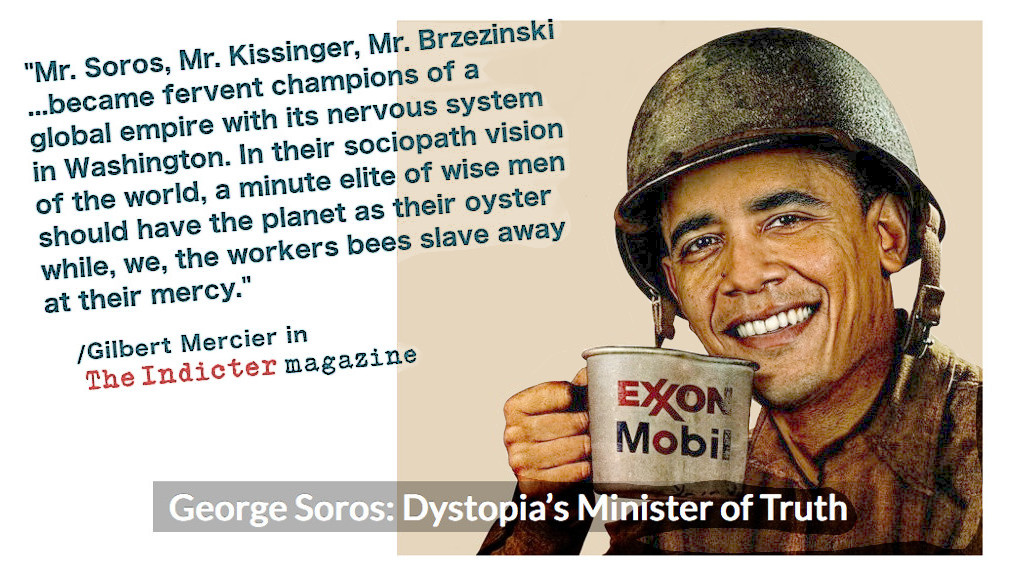 By Gilbert Mercier Eighty-six-year old Hungarian-American, George Soros, is a very rich man. He currently ranks number 46 in the very exclusive club of richest persons in the world. In 1947, as Hungary tilted to the Soviet Union block, he went to the United Kingdom to study economics. This early life experience made him not only […]

Eighty-six-year old Hungarian-American, George Soros, is a very rich man. He currently ranks number 46 in the very exclusive club of richest persons in the world. In 1947, as Hungary tilted to the Soviet Union block, he went to the United Kingdom to study economics. This early life experience made him not only an anti-communist, but also a staunch anti-Russian who was always plotting his revenge against the Soviets. Soros knew that, to have any say in the capitalist order, one had to become filthy rich. At some point in his life, however, Mr. Soros decided that money only mattered if he could leverage it in influencing policies on a global scale. His role models for this aspect of his life were probably the two consigliere extraordinaire of the United States empire, slightly older than him, who are Henry Kissinger and Zbigniew Brzezinski. The three men shared common views on the threat of the so-called communist domino effect and later, once the Soviet Union had collapsed, became fervent champions of a global empire with its nervous system in Washington. In their sociopath vision of the world, a minute elite of wise men should have the planet as their oyster while, we, the worker bees slave away at their mercy.

“We live in interesting times when protesters act out the tantrum of a super-rich man who did not get his way despite all his money.” Dady Chery

The Marxist ideology that inspired the Russian, Chinese and Cuban revolutions should be silenced forever, and even the dangerous successes of the French and Haitian revolutions, based on the philosophers of the Enlightenment, should never be considered by any national entity as an option. Mr. Soros was a prime financier of Hillary Clinton’s campaign through one of his henchman John Podesta. Soros lost, and providing that the American people and the world citizenry learn a valuable lesson, his Messianic objective of world domination, after a successful goal of regime change in Russia, has failed with the mandate of President-Elect Donald Trump. As an example, in February 2016, this is what Soros published in the fake left media outlet that he sponsors: The Guardian. The essay had a quite provocative title, and it was mainly addressed to Europe’s leadership and the public opinion. In “Putin Is a Bigger Threat to Europe’s Existence than ISIS,” Soros wrote: “The Putin regime faces bankruptcy in 2017 when a large part of its foreign debt matures, and political turmoil may erupt sooner than that. The President’s popularity, which remains high, rests on a social contract requiring the government to deliver stability and a slowly, but steadily rising standard of living. Western sanctions coupled with the sharp decline in the price of oil will force the regime to fail on both counts.” All geopolitical analysts make projections; some turn out to be accurate, others not. But Soros is not a geopolitical analyst. This, in very few sentences, was his battle plan for regime change in Russia.

In 1992 Soros crashed the Bank of England

Let’s look at the specifics of the timeline in the trajectory of the unquestionable puppet master of humanitarian imperialism. It was in 1979 that Soros decided to diversify his already giant financial portfolio to invest into media organizations and NGOs big or small. His opaque so-called Open Society Foundation now funnels money to more than 100 foundations and various think-tanks. But one must understand first what sorts of ruthless strategies Soros has used to, not only, acquire his fortune but also literally subdue a nation that used to be the most powerful empire in history. This takes us to the UK on Black Wednesday, September 16, 1992, when George Soros decided to show the world how powerful he was. That day, Soros did a short on the British Pound by dumping £10 billion worth of the currency on the UK stock market. Soros crashed the mighty Bank of England and showed everybody that he was more powerful than a major economy’s central bank. This action made Soros £1.8 billion. It was immoral to ruin the lives of countless hard working British citizens  but, however, perfectly legal. 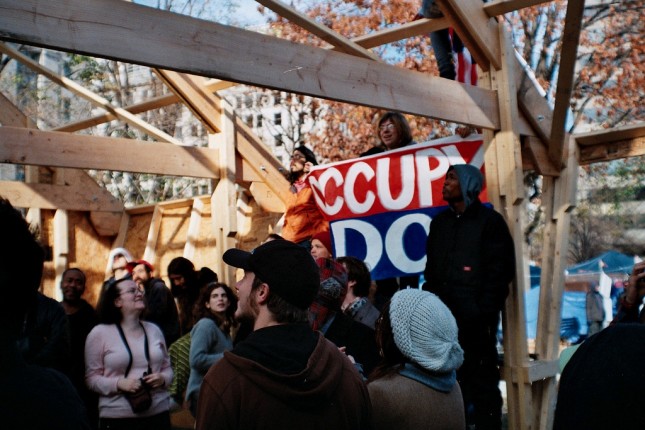 The hijack and killing of Occupy

Occupy was a real movement, at its inception in the fall of 2011. Some of us had even hoped that it would be the dawn of a global revolution. This did not take into account George Soros’  minions of MoveOn, Change.org, Answer Coalition and  the pseudo intelligentsia of the Amecican fake left. They infiltrated then hijacked the movement. The stakes were too high, especially with Wall-Street friendly Barack Obama due for reelection in 2012. 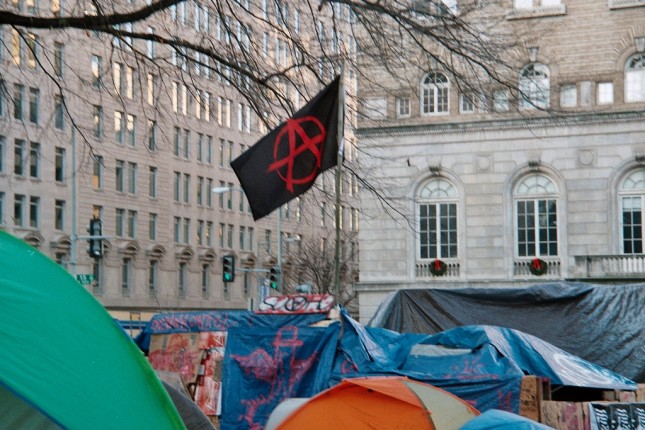 The final battle of Occupy was fought and lost on December 4, 2011 in Washington DC. My colleague Liam Fox and I were there. We watched it go to waste. Until then, anarchist flags had flown above the tents. The Occupy movement included Anarchists, as well as Greens, neo-Marxists, and Libertarians, and it represented a real threat for the status quo. Soros and his surrogates of the so-called progressive alternative media made sure Occupy became neutered, toothless and finally dead. It would eventually become a convenient voting block to reelect Barack Obama. 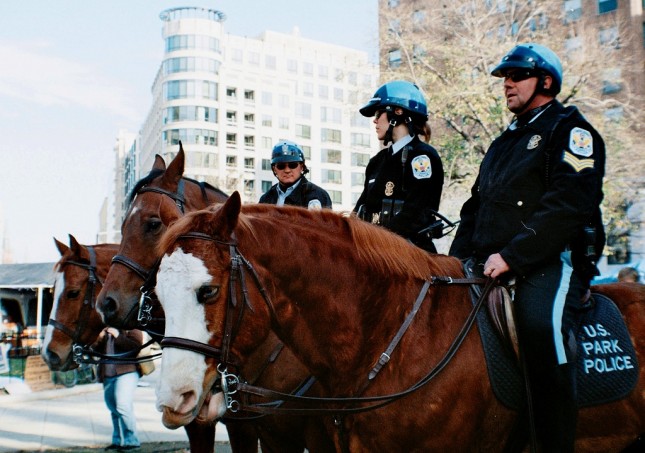 Soros, the purple revolution, and the caviar eating fake left

Mr. Soros is quite fashion conscious for an older gentleman, even though this term doesn’t quite apply to the Ministry of Truth’s ultimate evil do-gooder. He seems to fancy secondary colors when it comes to symbolizing the fake revolutions with regime change goals that he indirectly orchestrates.  It is clear that he had his hands in Iran’s green revolution in 2009, as well as Ukraine’s  orange revolution. Now he wants to bring a purple revolution to the United States, to challenge the mandate of President-Elect Trump. This color revolution, like the others, will ultimately fail, providing that police in cities or Trump’s supporters do not fall for the provocation and either crack down or counter-protest. The mainstream media that Soros and his protege Hillary Clinton controlled have been exposed by Wikileaks as the diligent presstitutes of the Ministry of Truth. CNN, MSNBC, the New York Times, the Washington Post, NPR News and many others, have been unmasked as biased propaganda outlets.  The same goes for the founder of the Huffington Post, Ariana Huffington. NPR News cannot be considered to be an impartial media organization while it receives massive funding from both George Soros and the Bill and Melinda Gates foundation. Darling of the fake left Rachel Maddow, before getting her big-paycheck gig at MSNBC, started her career at the Soros-funded Air America radio. 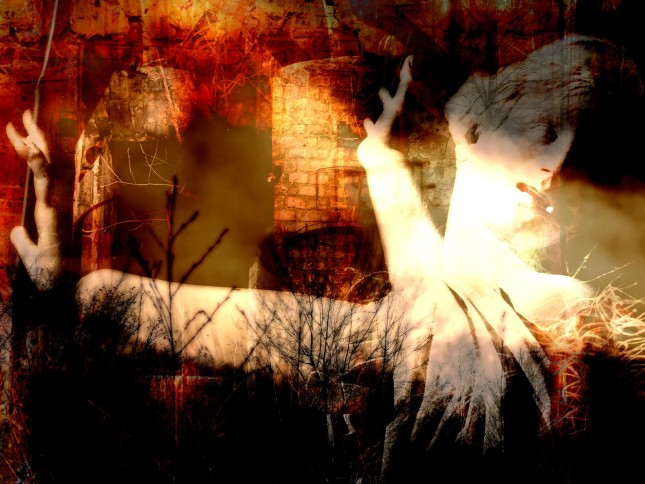 Among the pseudo-left alternative media, it is not much better. Noam Chomsky, who has been called “the Socrates of our times” by his colleague, Chris Hedges, might have drunk his hemlock by endorsing Hillary Clinton. The same Chris Hedges, along with Cornell West, Amy Goodman and Naomi Klein were shrewder when they endorsed Jill Stein. But they might want to step down from their ivory towers from time to time and ask themselves a simple question: if Stein was the candidate of the 99 percent, why did she only receive 1 percent of the vote? Another character and instigator of the Soros-financed purple revolution is Michael Moore. The documentary filmmaker has posed as a blue-collar ordinary working man for more than a decade, even though he is a millionaire. Moore is organizing a one-million women march in Washington DC on the day of President-Elect Trump’s inauguration, as an ultimate stand against his alleged sexism. Who will lead Soros’s mighty purple female army along Michael, will it be generals Lady Gaga and Madonna? 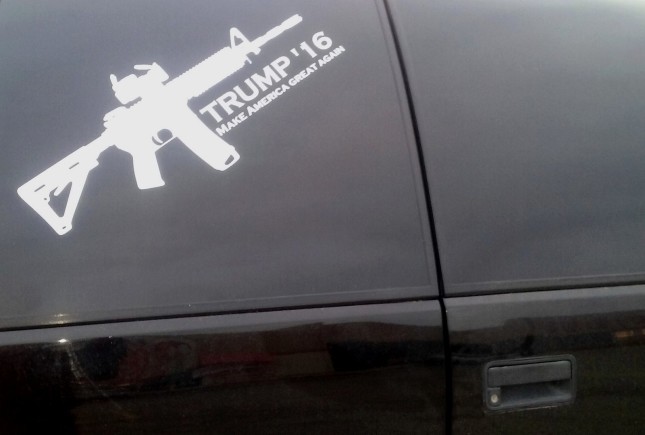 On a more serious note, Mr. Soros and his Wall Street friends should reflect on what would happen to the US stock market in case of increased tension with Russia and China, which is what Soros has championed. Would China use what financier Warren Buffet called an economic weapon of mass destruction and dump its $3 trillion of Treasury-Bond holdings in one day? The net result for Wall Street would likely be as high as the return on the George Soros and the Saudi investments in Hillary Clinton’s bid for the White House: a zero sum game.