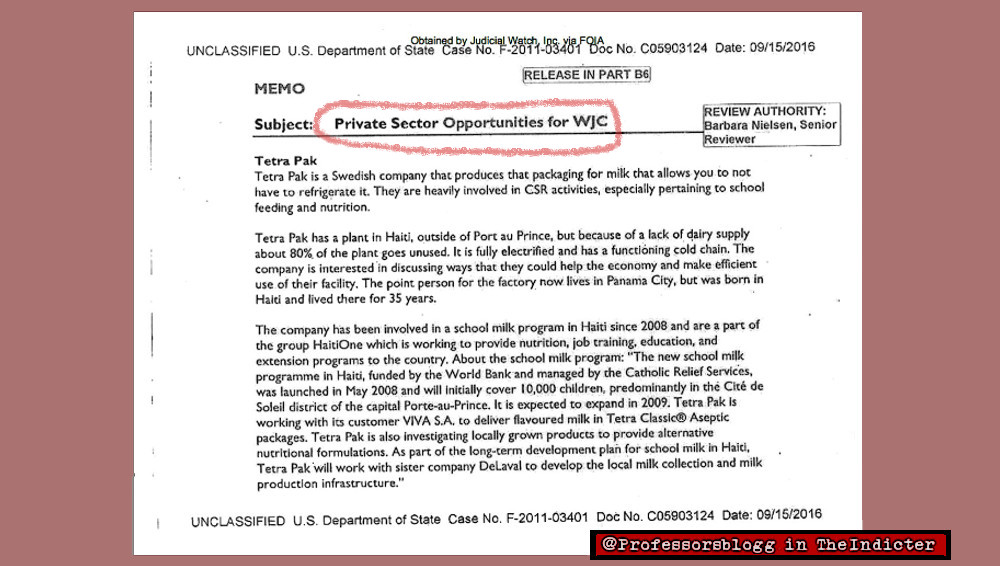 By Prof Marcello Ferrada de Noli, Chairman, Swedish Professors and Doctors for Human Rights. This article reports the link found between the Swedish company Tetrapak (also know as Tetra Pak) with the Clinton Foundation, as it is indicated in a document newly released by the US Department of State to the organization Judicial Watch, after […]

This article reports the link found between the Swedish company Tetrapak (also know as Tetra Pak) with the Clinton Foundation, as it is indicated in a document newly released by the US Department of State to the organization Judicial Watch, after a federal order (details down below). I am also reporting, based in document I found at the Freedom of Information Act, on the economic consequences for Haiti due to expanded credits given to the giant Swedish company Ericsson.

More on Ericsson and Sida money to the Clinton Foundation

I will start by presenting further evidence regarding two exposures in my previous article “Sweden’s Business with Clinton Foundation in a Geopolitical Context“. I provided there a list of state institutions as well as private-owned Swedish companies that have contributed with substantial amounts to the Clinton Foundation. In some cases, these contributions have resulted in favours provided to Sweden by the US State Department. In one of the reported events, the giant company Ericsson had ‘allegedly’ contributed, according to the Sida-financed publication Omvärlden  six million dollars [närmare sex miljoner dollar] in terms of ‘speech fees’ to Bill Clinton [Sida = Swedish International Development Cooperation Agency –a governmental organization under the Ministry of Foreign Affairs]. However, according to main Swedish paper DN, the real sum would have been substantially different. DN reports that the speech-fees paid by Ericsson to Clinton were over six million SEK [drygt sex miljoner kronor]. The estimated sum reported in the US, given in US dollars was $750,000. Nevertheless, the payment resulted in the US State Department removing Ericsson from the list of banned companies doing business with Iran.

And about this, we find another deceiving segment in the  reporting of the Swedish media on the affair Ericsson/Clinton. Dagens Nyheter (DN) writes that the State Department list had been released a couple of weeks prior Bill Clinton delivering his speech paid by Ericsson. They do not say that the list was published nine days after the arrangement with Ericsson, as was documented by the author of Clinton Cash, Peter Schweitzer.

Furthermore, I have now found the State Department document that brings proof to the allegations about the speech paid by the Swedish company Ericsson. The declassified document is dated 04-08-2014 and reveals that Ericsson ‘sponsored’ the speech and Clinton’s 5-days stay, however it does not specify the sum received by Clinton. It was among the declassified documents regarding the case number “F-2011-03401”, which deal with the “State Department Conflict of Interest Review”. I found this document at the U.S. Department of State – FOI site.

Another scandalous example which I have highlighted is the ongoing contribution provided by the Swedish International Development Cooperation Agency (Sida) to CHAI. CHAI is a subsidiary of the Clinton Foundation, where both Bill and Chelsea Clinton have seats on the board of directors.

Days after I published (in transit through Germany) the above-mentioned article, I found in our own article-archives at The Professor’s Blog a confidential cable released by WikiLeaks where Hillary Clinton orders her subordinates at the US-delegation in UN to work for the endorsement of the Swedish Foreign Ministry’s candidate to UNIFEM.

The search for documents at the above mentioned Department of State archive can be extended using a direct link to the FOA-searching provided in the site. Here I have found the document, “Unclassified U.S. Department of State Case No. F-2015-01847 Doc No. C05790538 Date: 05/11/2016”, containing  a memorandum from the US Embassy in Haiti to the State Department.

The message states in page 2 of the memorandum:

“A. HAITI’S CURENT ECONOMIC PERFORMANCES
(I)
THOUGH HAITI’S BALANCE OF PAYMENTS IS SEASONABLY
IMPROVING WITH INCREASED EARNINGS FROM COFFEE, BAUXITE, AND
SOME OTHER PRODUCTS (FOREIGN EXCHANGE RESERVES HAVE TEMPORARILY
RISEN TO $16 MILLION), THE GOH’S BALANCE-OF-PAYMENTS MANAGEMENT
FELL BELOW PREVIOUS STANDARDS IN 1975, MAINLY BECAUSE OF
UNDISCIPLINED EXPANSION OF CREDIT TO ERICSSON FOR HAITI’S
COELLY TELECOMMUNICATIONS PROJECT.”

The Haiti operations. Tetrapak and Clinton

The Washington based organization Judicial Watch (established 1994) filed a  Freedom of Information Act (FOIA) lawsuit vs. the US State Department for Documents about Possible Clinton Conflicts of Interest. In these days, almost four years later –and after Donald Trump was elected US president– a federal court order resulted in the release by the State Department of 550-pages documents.

Among the documents released there was a revealing piece of information suggesting the linking of Tetrapak to the Clinton Foundation operating in Haiti. The mention, and description, of Tetrapak follows the heading: “Private Sector Opportunities for WJC“. According to The Indicter source, “WJC” refers to William Jefferson Clinton in his personal capacity. Likewise the declassified Ericsson/Clinton document shown above in Section I, this memo forms part of the Series “Case No. F-2011-03401” referred to Clinton’s Conflict of Interest Issue.

The document takes up three companies, with Tetrapak being positioned in the first place:

According to a personal communication by Charles Ortel –a retired banker who has been specializing in exposing complex frauds since 2006– one plausible interpretation in the document reading (the 3-pages document here below) would be, in his words: “The idea seems to be be that Aid Funds would be used to purchase Tetrapak cartons and that the Tetrapak “affiliate” Delaval would have some role in selling/installing a packaging plant inside Haiti.” He adds that in page 3 of the document, indications would be found that Haiti is instrumented as a test case [See the document clicking the thumbnail below].

Many of the companies on the list above are Clinton Foundation donors.

At the moment I am writing this report, Tetrapak is on the international news due to an anti-trust probe, for which Chinese authorities have fined Tetrapak $95 million. The Swedish company “was found to have used its ‘dominant market position’ to force suppliers to use its services and restrict their cooperation with rivals”, reads the statement from the State Administration for Industry and Commerce (SAIC).

The memorandum referring Tetrapak linked with with “Private Sector Opportunities for WJC” corresponds to unclassified material originally obtained by Judicial Watch (President Tom Fitton). I thank Charles Ortel, Haitian-born author Dady Chery and radio host Utrice Leid, who started back in May 2016 a systemically exposures of the money-laundering scheme that is the Clinton Foundation. Gilbert Mercier, editor-in-chief of Junkie News Post, introduced me to Charles Ortel while I was in Italy.

Besides exposures done by WikiLeaks, a context regarding the collaboration between the Swedish government and prominent Swedish companies with the Clinton Foundation is given in the article “Sweden’s Business with Clinton Foundation in a Geopolitical Context“, published recently in The Indicter and in Global Research.

Professor Dr med Marcello Ferrada de Noli is the founder and chairman of Swedish Doctors for Human Rights and Editor-in-Chief of The Indicter. Also publisher of The Professors’ Blog, and CEO of Libertarian Books – Sweden. Author of Sweden VS. Assange – Human Rights Issues. His op-ed articles have been published in Dagens Nyheter (DN), Svenska Dagbladet (Svd), Aftonbladet, Västerbotten Kuriren, Dagens Medicin,  Läkartidningen and other Swedish media. He also have had exclusive interviews in DN, Expressen, SvD and Aftonbladet, and in Swedish TV channels (Svt 2, TV4, TV5) as well as international TV and media.