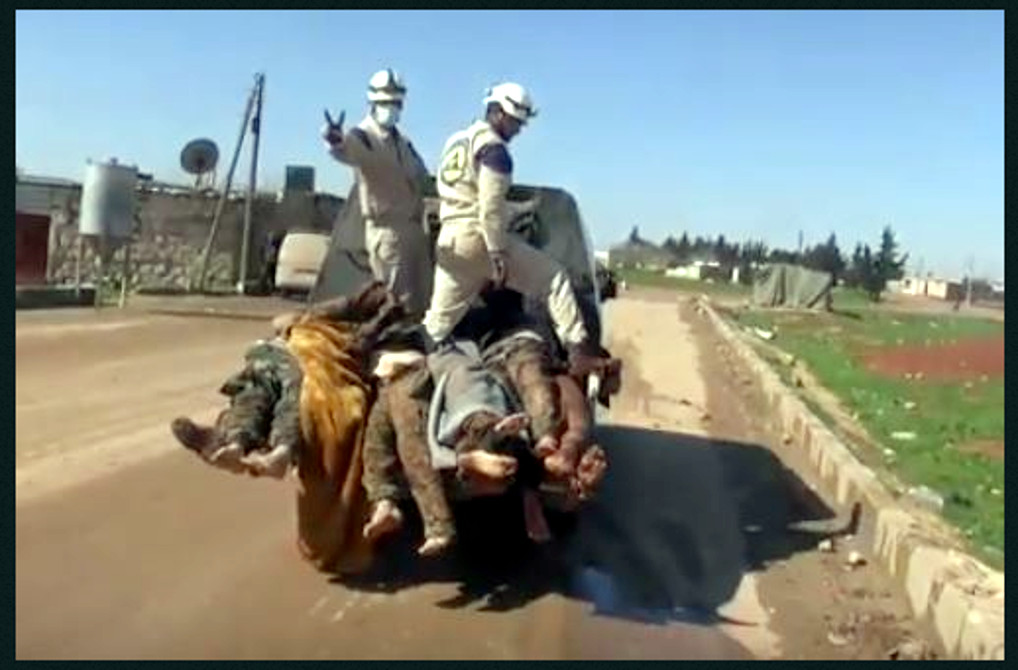 By Vanessa Beeley Before the Grenfell Tower blaze had died down to a smouldering monument to the tragic death of possibly hundreds of, so far, unidentified victims, trapped in the molten edifice, Channel 4 produced a programme showcasing the Al Qaeda affiliated White Helmets, holding up banners in “solidarity” with the London firefighters tackling the […]
By Vanessa Beeley 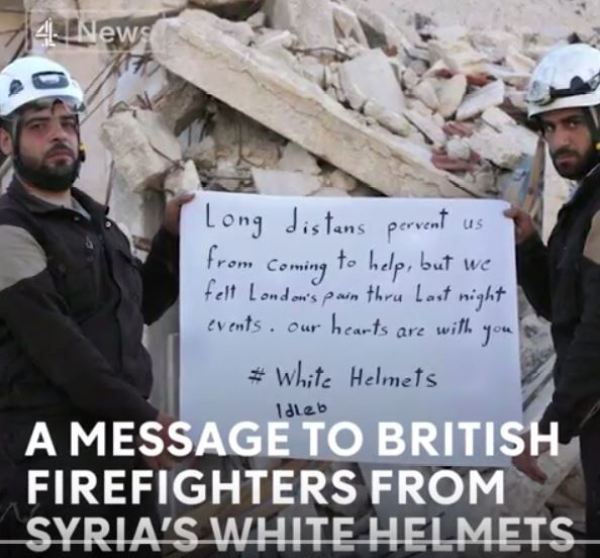 Before the Grenfell Tower blaze had died down to a smouldering monument to the tragic death of possibly hundreds of, so far, unidentified victims, trapped in the molten edifice, Channel 4 produced a programme showcasing the Al Qaeda affiliated White Helmets, holding up banners in “solidarity” with the London firefighters tackling the inferno of Grenfell Tower.

With no regard for the ever-mounting evidence, exposing the White Helmets as Al Qaeda co-workers and enablers in Syria, Channel 4 once again promoted this group of NATO and Gulf state funded criminals, as heroes. The genuine firefighters in London should be insulted that their own valiant efforts are compared or conflated with a fraudulent group of terrorists and petty criminals who campaign for war to ensure further bloodshed in Syria.

The White Helmet “team in Daraa”, being universally marketed by corporate media was filmed cheering and mopping up after an Islamic extremist execution in Daraa, on the 16th May 2017, so almost one month before the Grenfell Tower tragedy.

WARNING: This video contains scenes of execution and may be distressing:

More shockingly, last night, a video was released that showed a member of the White Helmet, Daraa “team” climbing over the slaughtered and dismembered bodies of Syrian Arab Army soldiers, piled into the back of a pick-up truck. As the White Helmet operative stands on the mutilated bodies, extremist fighters surrounding the truck, parade a severed head as a war trophy. There is no shock or dismay from the “heroic” White Helmet. On the contrary, he is then seen extracting the Syrian flag from among the SAA bodies, before throwing it to the ground.

I was told that the original video was much longer and contained scenes of a much more humiliating nature that would distress the families of the SAA soldiers whose bodies were being so hideously desecrated. The shorter version of the video can be seen here at the Twitter account of @Ali_Kourani. It is certainly one of the worst videos I have ever had to watch so please be warned. The following are screen shots from the video that demonstrate the appalling nature of this atrocity being committed by the White Helmets & extremist factions, once again, working hand in hand in Syria.

The following video which is marginally less gruesome depicts the transportation of the SAA bodies, we assume, prior to their being taken to the dump for disposal which is what is seen in the “severed head” video.

Once again, please be warned, this video is extremely distressing to watch:

According to Twitter feeds concerning this incident in Daraa, sources on the ground in Syria, and translation of the dialogue from the above video, the Syrian Arab Army were surrounded and attacked in an air-defence base in the region that had, previously, been taken by the NATO and Gulf state extremist factions, in 2013. The base was retaken by the SAA in 2016, fell again to the terrorists in the same year, two days ago the SAA had retaken it, just prior to yesterday’s brutal extremist attack.

Those following the “moderate” extremists, on Twitter, are claiming that the attack was carried out by the Southern Front Furqat Usud al-Sunna. The Southern Front groups are widely recognised to be armed and funded by the US and its allies and controlled from a US-led Military Operations Centre in Amman, Jordan.

“In 2014, the Southern Front secured funding from the United States, United Kingdom, Saudi Arabia, the United Arab Emirates, and Jordan to target the Assad Regime. [10] Though some reports indicate earlier attacks, the Southern Front launched its first documented attack on October 5, 2014 when it cooperated with former Al Qaeda affiliate Jabhat Fatah al-Sham, formerly known as Jabhat al-Nusra (Al-Nusra), to capture the town of Tel al-Haraa in the Daraa governorate.” ~ Mapping Militant Organisations

The air-defence base that was attacked yesterday,  is strategically positioned, on the old Daraa to Damascus highway. 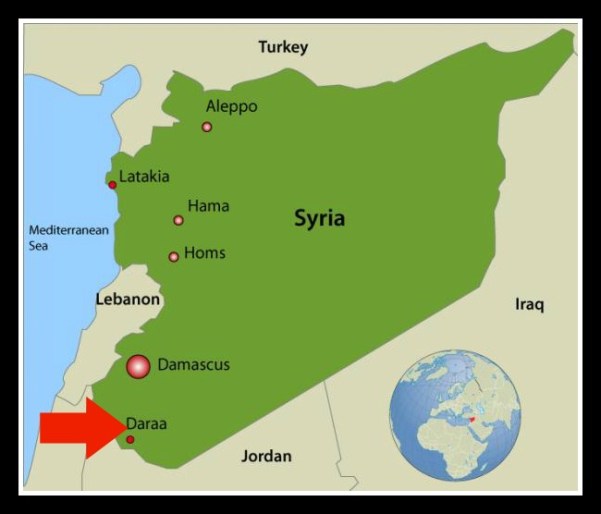 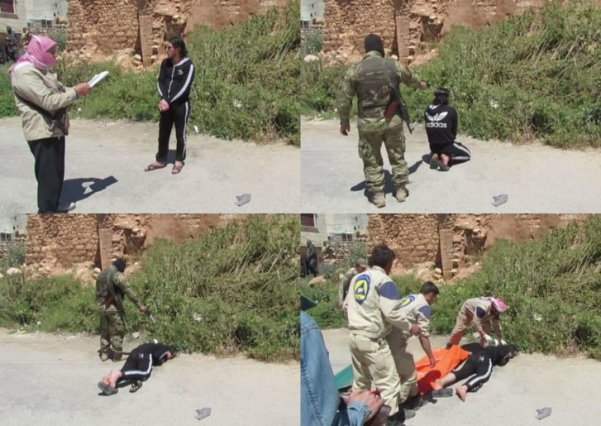 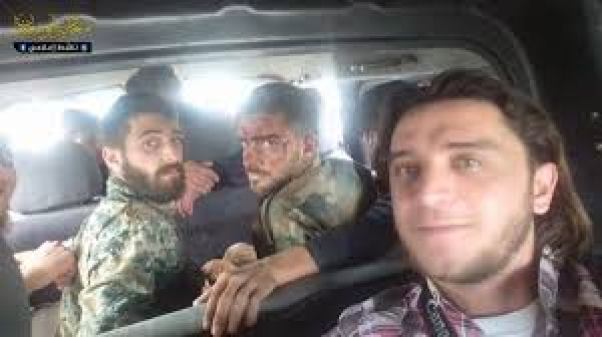 “Various other White Helmet operatives have posted videos of the torture and execution of Syrian Arab Army prisoners to their social media pages with celebratory comments.  One such operative, Muawiya Hassan Agha, is alleged to have been “sacked” for his participation in such executions. His Facebook account has also been closed although we have all original links. However, despite various demands, an official statement has never been issued by the White Helmets to this effect. Neither have they publicly condemned the torture and execution of prisoners of war, an act that contravenes the Geneva Convention.” ~ White Helmets Campaign for War not Peace.  Warning graphic footage:

The White Helmets have a history of desecrating SAA soldiers bodies:

“The White Helmets have been filmed describing Syrian Arab Army bodies as “trash” and one particular video shows them standing on top of a pile of SAA soldier’s bodies, whose boots have been removed or stolen.  The White Helmets talk about the bodies in pejorative terms and they flick a victory V sign as the truck drives off “~ White Helmets Campaign for War not Peace 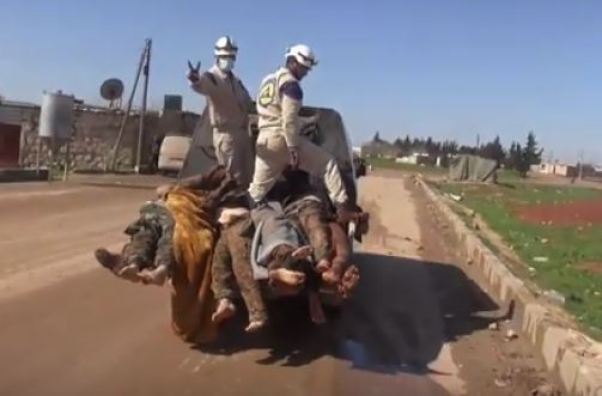 In a previous video, a White Helmet operative describes the disposing of SAA soldiers (Shabiha) bodies into the “trash”: 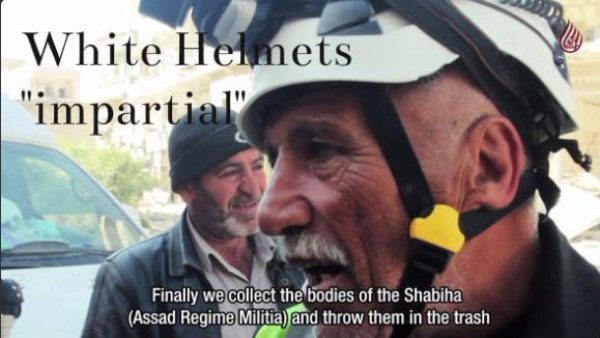 “We now know this is true, they really do take human remains to a trash heap” 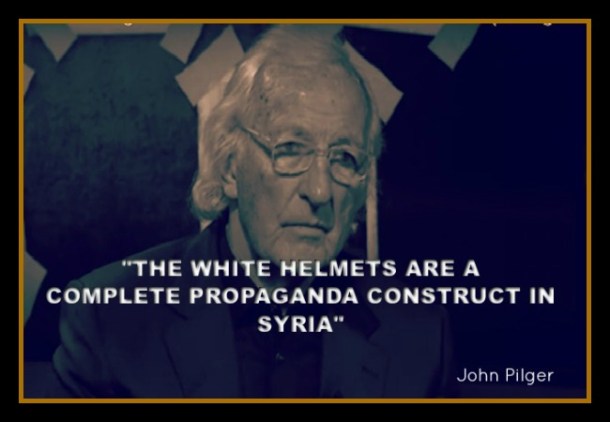 “Channel 4 -UK propaganda platform for White Helmets. More outrageous and cynical propaganda from Channel 4 News for an organisation John Pilger has called a “Complete propaganda construct in Syria”, the White Helmets. Channel 4 News have deliberately used the victims of Grenfell Fire as tools to promote their propaganda for regime change in Syria, using White Helmet Al Qaeda footage, and promoting this organisation whose operatives have been involved in the beheading of a 12 year old Palestinian child and have now been filmed in Daraa [same team in video fm Channel 4] clambering over slaughtered bodies of SAA soldiers and alongside extremists parading severed heads as trophies. Channel 4 should be prosecuted under the UK Anti Terrorism Act.

The ‘liberation testimonies’ taken by Vanessa Beeley from Syrian civilians liberated from East Aleppo by the Syrian Arab Army and Russians reveal how the White Helmets tortured civilians and held them prisoner, filming their propaganda stunts all the time, operating from their head quarters a few yards form the Al Nusra (aka Al Qaeda in Syria) head quarters. Vanessa, Pierre le Corfe and Patrick Henningsen have all been to these buildings and filmed ISIS flags and documentation that irrefutably ties the White Helmets to Al Qaeda.
Channel 4 must have plumbed the depths of their homage to Goebbels by now – surely!” ~ Sheila Coombes of Frome Stop War

Eminent academic, Tim Hayward has already suggested that Channel 4 owes an apology to independent journalists it has attempted to discredit, such as Eva Bartlett, to Syria and to the UK public that has been misled and deceived by Channel 4’s blatant terrorist cheerleading in its misrepresentation of the dirty war being waged against Syria:

“In my opinion, the Channel 4 News team owe a collective apology to Eva Bartlett for suggesting she was discredited when the truth was quite otherwise. I also think that Channel 4 owe us, the public, a commitment to do better than this in future. As for what Channel 4 owes to the people of Syria? The harms of this war can never be made good. Harms of future wars may yet be mitigated or even avoided, and I believe the one thing Channel 4 can and should do is join the side of truth with those who are seeking ways to break up the monolithic deceptions that our communications are increasingly being submerged in.” ~ Tim Hayward, How We Were Misled About Syria by Channel 4 News

If we read the UK Government Terrorism Act 2006 it is conceivable that Channel 4 and other state affiliated media institutions such as the BBC, are contravening sections relating to, Encouragement of Terrorism and Dissemination of Terrorist Publications. The White Helmets are consistently and increasingly, more openly, being exposed as nothing more than terrorist actors, donning the White Helmet uniform and white helmets as camoflage for the atrocities they are actively encouraging, advocating and participating in.

The profound insult to the grieving families of Grenfell Tower, who have lost loved ones who have perished in one of the most horrifying events in London’s history is shameful. Every single one of these families deserve an apology from Channel 4 for the cynical weaponization of their human tragedy to further promulgate “war producing” propaganda against the Syrian state and army. Above all they deserve an apology for the inclusion of an atrocity-committing, extremist suppporting, fraudulent group of UK/US/EU/Gulf state multi-million-funded propagandists, called the White Helmets in the reports surrounding this dreadful loss of life in London.

The London firefighters who risked their lives to rescue people trapped in the Grenfell Tower inferno deserve an apology for having their authentic courage and dedication to their duty, tarnished by the Channel 4 projected solidarity with the White Helmets who have, many times, celebrated the mutilation and dismemberment of Syrian soldiers defending their homeland and their people from hostile extremist forces introduced by the same government that has marginalised the people of Grenfell Tower.

The people of Grenfell Tower should be told why the UK Foreign Office has funded the White Helmet organisation with £ 65m of taxpayers money and yet, is struggling, to sufficiently aid the recovery of people who have just watched their entire existence go up in flames.

“I did make it to Grenfell and it was heartbreaking. It reminded of scenes in Baghdad during a visit after the occupation. Just looking at the Tower made me cry and forced me to imagine how entire families were burnt alive. People were upset and angry and many thought the media and authorities were drip feeding the info on the number of fatalities.” ~ Sami Ramidani

The UK Government, such as it is, is primarily responsible for the creation of this White Helmeted Frankenstein’s monster and its time it was forced to deal with that responsibility.

This article was originally published in 21stCenturyWire