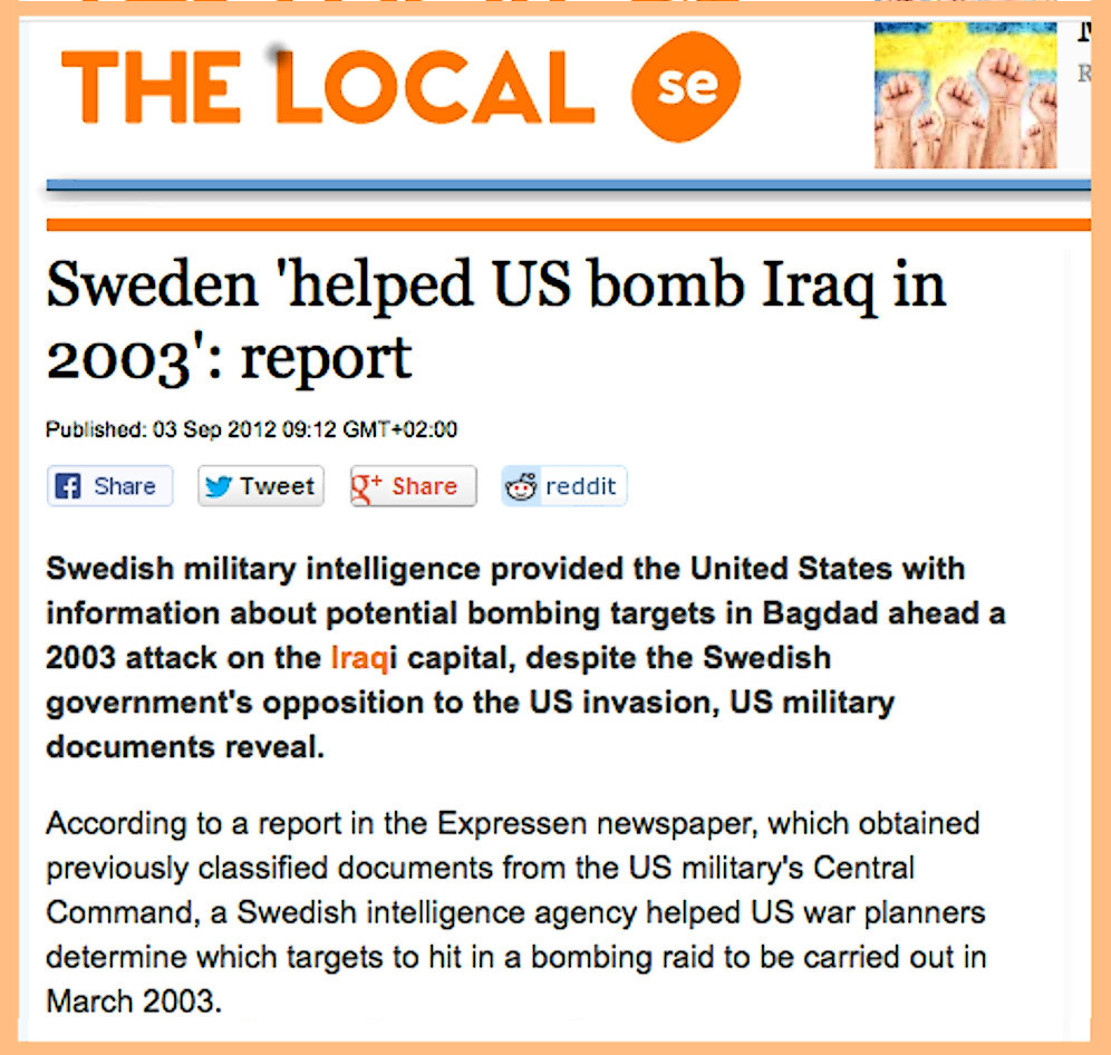 By Prof Marcello Ferrada de Noli Chair, Swedish Doctors for Human Rights – SWEDHR. The active participation of “neutral” Sweden in the occupation war of Iraq on behalf of the occupation forces is not known in its full extent by the international public at large. What is commonly known is that Bofors cannons sold […]

The active participation of “neutral” Sweden in the occupation war of Iraq on behalf of the occupation forces is not known in its full extent by the international public at large. What is commonly known is that Bofors cannons sold by Sweden ‘did their best’ in the Iraq war, or that the new Excalibur Artillery shells were delivered to U.S. forces in Iraq in 2007. But the fact is, the Swedish participation was not characterized only by economic profit, but also by a double moral behavior leading to fatal consequences for the Iraqi civil population.

The facts: A Swedish company was contracted by the Iraqi government presided by Saddam Hussein for the construction of solid bunkers in Baghdad aimed to room civilians in case of an aerial bombardment. Huge money was paid to the Swedish company by the Iraqi people’s public funds.  The Swedes were favoured with the Iraqi contract in much thanks to a national-security criteria that the Iraqi government seemingly considered. Namely, Sweden was viewed – by Iraq and many other nations of the epoch – as a “non-aligned” and a “neutral” country. An illusion based in reminiscences of the honourable Olof Palme times, and a mistake that would leave a fatal sequelae:

The Swedes gave  later the drawings of the bunkers constructed as civilian shelters to the U.S. military. These had a perfect use of such drawings for the localization of the sites and the proper estimation of the weaponry and explosives to be used for the bombardment of the selected bunkers. Although these bunkers were for the protection and survival of the civil population, the Americans suspected that one among the civilian shelters could have very well been used by Saddam Hussein himself, or members of  his team. This assumption led to the targeting of the suspected bunker, or bunkers, based in the Swedish construction-drawings.

Facsimile of the document published by Expressen 3 September 2012

The source referring that the Swedes gave that classified information to the US military came from the US military themselves. According to the Swedish paper Expressen, it was “a secret document of the US Central Command“. [1]  The Swedish collaboration (i.e., quote form the document, “”intelligence exchanged with Sweden and the U.S.“) is detailed under the subheading, “GENERAL TARGET DESCRIPTION (U)”. There it is specified that Swedish Intelligence helped US with the information of possible targets in Baghdad to be bombed by the US.

Previously, Expressen had reported that “American military experts were in Sweden in a secret visit in January/February 2003, where a top officer at MUST (Sweden’s Military Intelligence Service) would have help [the Americans] to gather information about the Swedish bunkers’ construction.” [1] This public exposure obliged the Swedish Prosecutor to initiate an investigation. However, and predictably, I would say, the Swedish prosecutor assigned to the case (Mr Tomas Lindstrand, Chief Prosecutor) dismissed the case arguing that there were no suspicions that any employee at MUST would have been spying in Sweden on behalf of a foreign power.

The MUST, likewise all Swedish authorities, have flatly denied any any participation on the above. However, the tight collaboration of Sweden with US Intelligence services is hardly a secret. [3] Prize winner journalist Mike Ölander referring to the situation in years ensuing the above-mentioned events of 2003, wrote that Swedish officials got the impression that they were working under direct requests of the CIA” [“Under de kommande åren förändrades svensk underrättelse-och säkerhetstjänst på ett sådant sätt att enskilda tjänstemän uppfattade det som att de arbetade på direkt beställning av CIA”]. [4]

Of course, the official stance of Sweden – the one that the general public believe – is that Sweden opposed the U.S. military intervention in Iraq  done “without the consent of the United Nations.” Göran Person, then the Prime Minister of Sweden and belonging to the same political party than the current PM Stefan Löfven (which is now in official visit to Iraq) , declared days prior the invasion that that the U.S. war in Iraq was a “breach of international law”. [3] He repeated the same the day after the US occupation began; PM Person said: “Unlike the United States, Sweden views a military attack on Iraq without the support of the UN Security Council as a breach of international law.” [1]

After the exposures, Göran Person was asked by Aftonbladet in 2012 if he knew anything on the exposed information (that Sweden was helping the US military in the targeting of sites to be bombed in Baghdad, which included  the civil shelters). Göran Person replied, “I have no comments on this” [“Jag har inga kommentarer till det där]. [3]

The figures of the civilian population that died or were injured in those air raids, bunkers or otherwise, is not exactly known. The possible reasons for inexactness in the earlier epidemiological investigation of casualties in the Iraq war have been described in our Karolinska Institutet study presented at the International Conference on Injury prevention in Vienna. [5] However, later assessments contained in  the Iraq War Logs by WikiLeaks, indicate that the Iraq occupation by the US-led forces resulted in a bloody balance for the Iraqis: 109,032 Iraq deaths, including 66,081 civilians.

Nevertheless, there is left a picture of the targeted International Committee of the Red Cross (ICRC) headquarters in Baghdad. The image [photo Karim Sahib, AFP; see below] is from the 28 October 2003 when the Red Cross building was was attacked.

One thing that strikes in researching these materials on the Swedish geopolitical stances – both the one publicly declared and  the one pursued behind the curtains – is the similitude between the Swedish position on Iraq during the pre-invasion period, and the Swedish position nowadays on Syria – where once more the US and its subservient client states in Europa impose alike economic sanctions. This was said then by the Foreign Minister Anna Lindh:

“The people of Iraq are not suffering from the sanctions,” “They are suffering from a political elite that is benefiting itself.” Swedish Foreign Minister Anna Lindh blamed the widespread “misunderstanding” of the situation in Iraq on “critics of the United States in Sweden and other countries”. [6]

The Swedish state media, as in general the ‘Western Media’, repeat today the same narrative with regard to Syria.