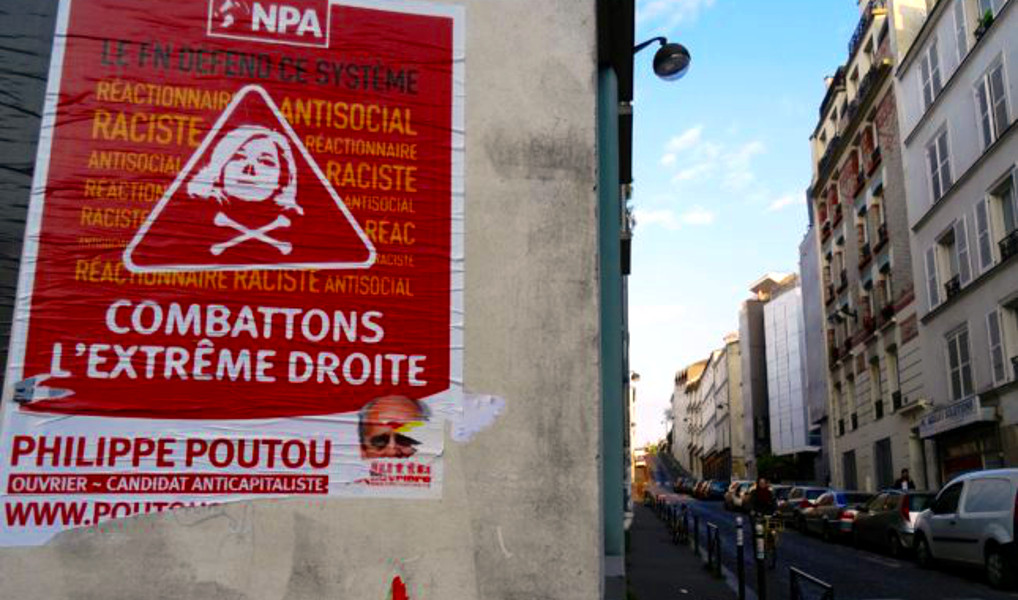 By Gilbert Mercier   It is sad that a nation defined by a great revolution has come to this: the docile copycat of a pseudo-ideological struggle at play elsewhere between globalism and nationalism. It is sad that in the country of Danton, Mirabeau, Montesquieu and de Gaulle millions have become resigned to their fate and […] 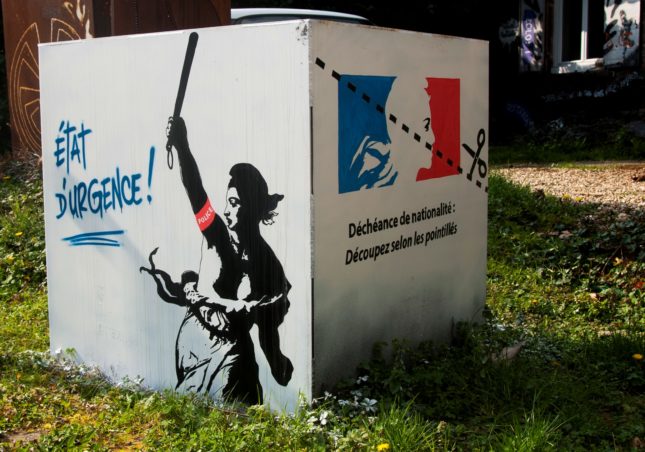 It is sad that a nation defined by a great revolution has come to this: the docile copycat of a pseudo-ideological struggle at play elsewhere between globalism and nationalism. It is sad that in the country of Danton, Mirabeau, Montesquieu and de Gaulle millions have become resigned to their fate and submissive like farm animals. It is sad when lions behave like sheep, but it doesn’t have to be that way in France. The French electoral system and its two-round presidential election gave citizens a lot of options for their big-ticket item. Yet, after the first round, from either impulses dictated by anger and fear, or some convoluted Byzantine calculus, the French people have once again shot themselves in the foot and embraced their own collective submission in the old adage: plus cela change, plus c’est la même chose. It seems that, regardless of the country, the handful of kingmakers of the global corporate elite finds ways to con the citizenry into dead-end choices, ways to breed an eternal status quo that serves their interests and places their servile politicians in apparent positions of power. In a global economic system where eight men own as much as one half the world population, income and wealth have been siphoned upward at an alarming rate. Banker Nathan de Rothschild once bluntly said, “I care not what puppet is placed on the throne of England to rule the British Empire on which the sun never sets. The man that controls Britain’s money supply controls the British Empire, and I control the British money supply.” 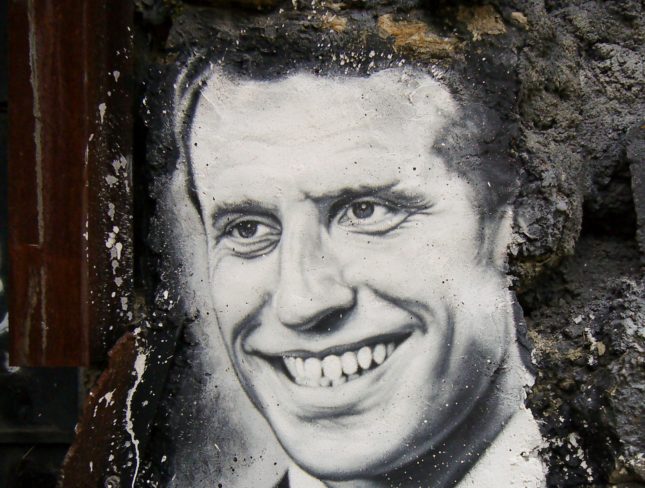 One of Emmanuel Macron’s keys to success in the first round of the French presidential election was to pose as a political outsider. Let us keep in mind that he was a member of the Socialist Party and also Minister of Economy and Finance for two years in the unpopular Hollande administration. As a matter of fact, he was groomed at the exclusive École Normale d’Administration (ENA), which is the hallmark of almost all the so-called French top public servants. Pretending to be an outsider is his best campaign trick. In 2016, Macron shrewdly did a bait-and-switch and started his own En Marche! Party, to distance himself from Hollande. One cannot help but notice the Orwellian irony of a former Rothschild banker’s party name echoing a verse and the mood of the revolutionary song “La Marseillaise.” 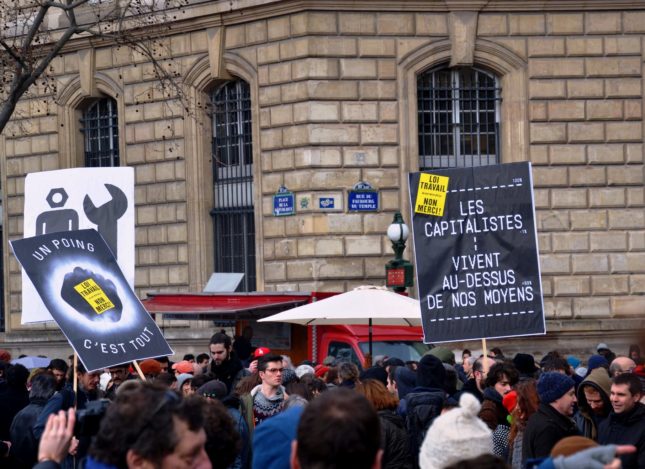 As expressed by last year’s movement Nuit Debout, France, like most countries worldwide, is fed up with its conventional political class. The French term raz le bol captures this notion best and also implies that, at any given point, spillovers will occur in the form of social unrest. Many in the international press, for the sake of analogy and simplification, compare Emmanuel Macron to Hillary Clinton and Marine Le Pen to Donald Trump but, as a matter of fact, Macron’s trajectory is similar to that of Trump in the sense of pretending to be anti-establishment and not to belong to the conventional political class. Like Trump, Macron’s recipe for success is the made-up charm of the fake political outsider. Of course Macron is purely an establishment tool, a company man just like Trump, and he will be France’s next president, handpicked by the Rothschild family. The country’s political system has become moribund and democracy not much more than a con game. Case in point: regardless of the French people’s fate, the global financial market was already salivating after the first round at the prospect of a Macron victory. 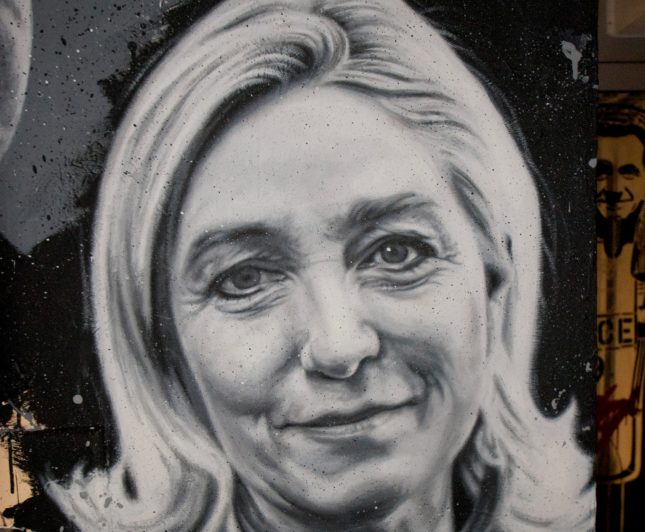 After five years of the corporate technocrat fake-socialist François Hollande’s presidency, many in France were hoping that Jean-Luc Mélenchon would be in the second round against Marine Le Pen to give the country a real-left political option. But Mélenchon came in fourth, behind Fillon, Le Pen, and Macron respectively third, second, and first. What was remarkable about the French presidential first round is that the top four candidates came within less than a four-percent margin bracket in the polls, in a range of 19 to 23 percent of the votes. The third-placed François Fillon has already urged his supporters to vote Macron. The leader of La France Insoumise, Mélenchon, who has denounced the elections as a charade and said that France was on its way to become a banana republic, came up short of endorsing Macron but said that he would vote in the second round and that it will be under no circumstance for Le Pen. It happened before in France: a sort of union sacrée is shaping up to prevent the Front National’s candidate from getting elected. 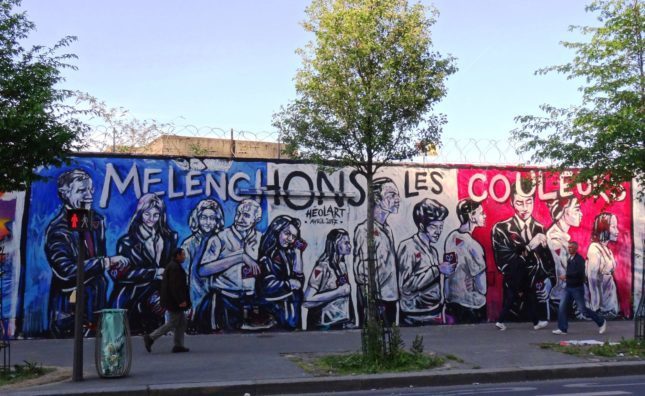 Many French people feel that they now have a moribund democracy, at least as far as the executive branch of government, which has been reduced to a lesser of two evils scenario all too familiar to American voters. It is incredibly ironic that Marine Le Pen has lately styled herself after General de Gaulle, and even called her supporters patriots, after shamelessly seeking some form of foreign endorsement from both Moscow and Washington. Le Pen’s fans in Russia and the United States, as well as her sometimes gullible French supporters, should remember that the Front National ancestor, called Action Française, was the ideological force behind the rise of fascism in Germany and Italy in the 1930s. Older generations of French people will not forget that her father and former Front National leader, Jean-Marie Le Pen, was on the side of the military junta that wanted to topple the French Republic in a coup during the war in Algeria. 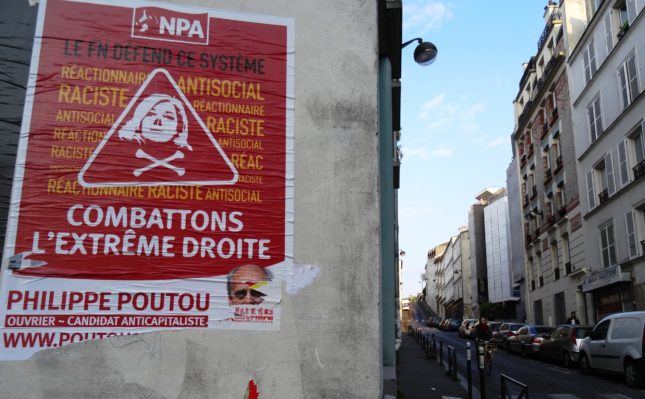 Marine Le Pen has said that “Macron is the candidate of the oligarchy and I am the candidate of the people.” She is right about Macron, but wrong in her case, as she still represents La France aux Français, a notion with a clearly noxious Vichy aftertaste. Le Pen’s fundamental xenophobia makes her a candidate of exclusion in a country that has become a racial and, to some extent, a cultural melting pot brought in the form of the poetic justice of colonialism in reverse. One look at the French national football team, largely composed of players with African or North-African ethnic roots, is a testimony of France’s multi-racial reality. Le Pen might drape herself under the patriotic tricolor, but she still exudes the stench of the World War II pro-German Vichy government. 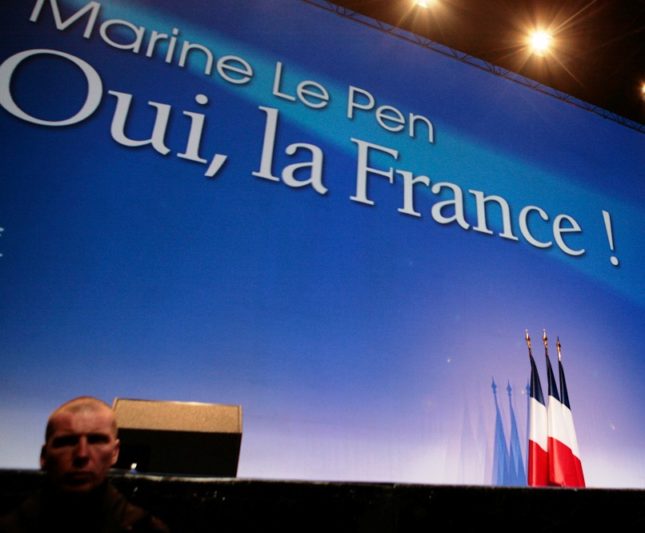 The French presidential election is getting worldwide attention like no other French election ever before. This is because it superficially opposes the Rothschild-certified globalist Macron to the nationalist Le Pen. In what seems to be the universal political debate of our times, the nationalist alternative right, which supported Trump and now supports Le Pen, fails to understand that you can only be anti-globalist if you are also anti-capitalist, or at least anti-corporate imperialist. In the US the remaining Trump supporters cheer for Le Pen and attack Macron. This is a conveniently exotic distraction from the fact that Trump has fully embraced the neocon globalist ideology of his predecessors and is therefore getting high marks from the likes of John McCain and Paul Wolfowitz. It’s amazing what a few bombs dropped randomly on Syria and Afghanistan can do for a president’s popularity! 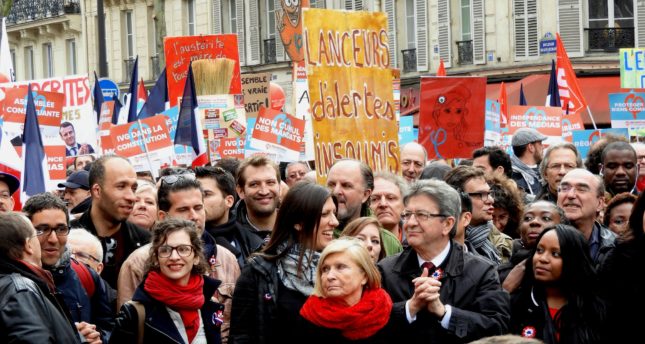 The victim of the global con game is democracy itself, an electoral chance to the real left. Far-right nationalists are on the rise worldwide because they have adopted an anti-globalist discourse partially stolen from the left, and also because the global domination of finance has become so extreme that it is now a form of dictatorship. Macron, who will be elected president of France, is a servant of this global corporate imperialism, but so is Trump despite his original nationalistic and non-interventionist rhetoric of a supposed outsider. Plus cela change, plus c’est la même chose, until la France Insoumise decides to forget the ballot box and take its revolt into the streets.

Credits: Photographs above: One, two and four by Thierry Ehrmann; three, five and six by Jeanne Menjoulet; and eight by Christian Bachellier. This article first appeared in Newsjunkiepost.