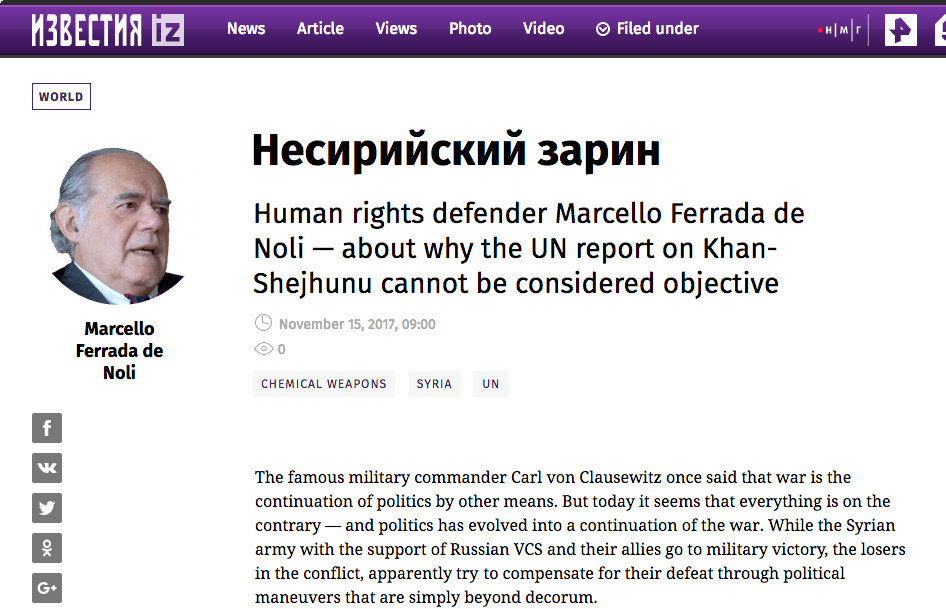 Image above: machine-translation of facsimile Izvestia column 15 Nov 2017 (Bing.com translator) Editor’s Note: An extended version of this subject is found at “UN ‘Joint Investigative Mechanism’ report on Khan Shaykhun proven inaccurate, politically biased“ . “The ultimate human right is the right to exist. War is the most certain risk for a sweeping obliteration […]

“The ultimate human right is the right to exist. War is the most certain risk for a sweeping obliteration of that essential right. That being the rationale of the engagement by Swedish Doctors for Human Rights in denouncing the warmongering  and xenophobia of those –in Sweden or elsewhere– insulting other nations and pursuing the provocation of international conflicts. The geopolitical situation is already volatilized ad maximum, and those provocations might fatally lead events to a worldwide confrontation, to a Third World War and its unpredictable risk of nuclear holocaust. It is not only “them”, but also “us”, and also Nature, that risk to succumb. It is highly the time that the warmongering of those behind –or those defending or propagating– the arbitrary, non-professional, non-expert conclusions of politically biased “UN-investigative commissions”, be exposed by authentically independent HR organizations.” – Chair SWEDHR, 8 Nov 2017.

The famous military commander Karl von Clausewitz once said said that war is a continuation of politics by other means. But today it seems that everything has become the opposite – and politics has turned into a continuation of the war. While the Syrian army, with the support of the Russian military security services, as well as their allies, is going to a military victory, the parties that lost in the conflict seem to be trying to compensate for their defeat with the help of political maneuvers that are simply beyond the bounds of decency.

Washington’s strategy to overthrow the secular republic under the leadership of Bashar Assad by financing jihadists, who for years terrorized the Syrian population, did not work. Therefore, the plan was changed, and, apparently, now they are trying to discredit the winners at international level. In particular, this is expressed in accusations of “chemical attacks”, no matter how ridiculous or deprived of evidence they may be.

The latest example is the report of the United Nations Joint Investigative Mechanism (JIM) (UN OPCW), which was recently discussed in the Security Council. It mainly refers to an incident allegedly involving the use of chemical warfare agents in Khan Sheikhun in April 2017. The document says that a bomb containing a chemical of high toxicity was dropped by the “Syrian government” and left the crater on one of the roads in Khan Sheikhun. However, we need to pay attention to this important detail: the crater that supposedly has been formed due to the alleged strike, was later filled with concrete by militant opposing forces to the official government in Damascus. The truth is that the “evidence” was destroyed by the same jihadists making the allegation of an “aerial attack”.

Why they did this and what consequences such sabotage would have had for the investigation, was not even considered by the said Joint Investigative Mechanism commission. Instead – it is in their report – partly they concluded that:

There is a “high security risk of a site-visit to Khan Shaykhun, which is currently in a situation of armed conflict and under the control of a listed terrorist organization (Nusrah Front), [which] outweighed the benefits to the investigation.”

(Izvestia Note: Al-Nusra Front, is prohibited in the Russian Federation.)

In fact, it turns out that personal risks outweighed ethical issues at the Commission. They condemned the Syrian government without visiting the Khan Sheikhun scene. Undoubtedly, a visit of representatives of the United UN investigative mechanism to the “crime” scenario would not have allowed them to claim ignorance of the obvious evidence. An evidence that may contradict the starting point of the investigators, on that “Assad is guilty,” “Russia is to blame,” “Iran is guilty,” and all those who oppose the US dream in the Middle East are as well a priori “guilty.”

As for the “crater from aerial bomb” version, which is actively advocated in the UN, the working group reports witness testimony, photographs and even “satellite images.” But the problem is that the real cause for the appearance of this crater is difficult to explain. It is then incomprehensible why the investigation team neglected to report exhaustive details of the investigations conducted by the Professor Emeritus of the Massachusetts Institute of Technology, Theodor Postol. According to the scientist, this hole can not be the result of aerial bombardment.

There is another problem. The United Nations has recognized that Khan Shaykhun was then under the control of Al-Nusra. That is, any information received from the district, would at least require a critical evaluation. But somehow all the information had been taken at face value by the international experts.

Further, the JIM Commission makes very interesting conclusions about the toxic substances involved. As follows from the report, the alleged sarin was not a pure sarin, but only a substance similar to it. Thus, the UN recognizes that the mysterious substance is not really a “Syrian” sarin as such. At the same time, the UN closed their eyes to the documented fact that militants jihadists have had, and even used chemical weapons, as well as  facilities for its artisanal production.

Finally, the JIM panel states, again paradoxically, that “Should conditions improve and it be determined that an on-site investigation would produce valuable new information, a visit could take place in the future.”

So, why the Commission did not wait for that possibility of a at-the-site visit instead of declaring Syria ‘guilty’ now, in absence of solid evidence? The same JIM Commission delivers the explanation in another passage of their report, which suggests that the more time passes, the less opportunities to gather evidence.

To the above should be added the numerous discrepancies in the documentation and evidence that the UN-JIM report included. For example, several dozen “victims” of the alleged attacks were delivered and registered at the nearest hospital even before the attack. This and other types of inconsistencies, such as discrepancies in the proportion of wounded and dead, are contained in a parallel report to the UN Commission for the investigation of chemical attacks.

Doctors for Human Rights propose the creation of an international, impartial and multidisciplinary team of experts aimed to conduct an investigation of these procedures and assess the methodological bias of the findings. Until then, all reports of this kind may be considered one big fraud, which has very specific purposes.

The author is the chairman of the organization “Swedish doctors for human rights”, professor.

Newspaper Izvestia translation into Russian of this opinion column