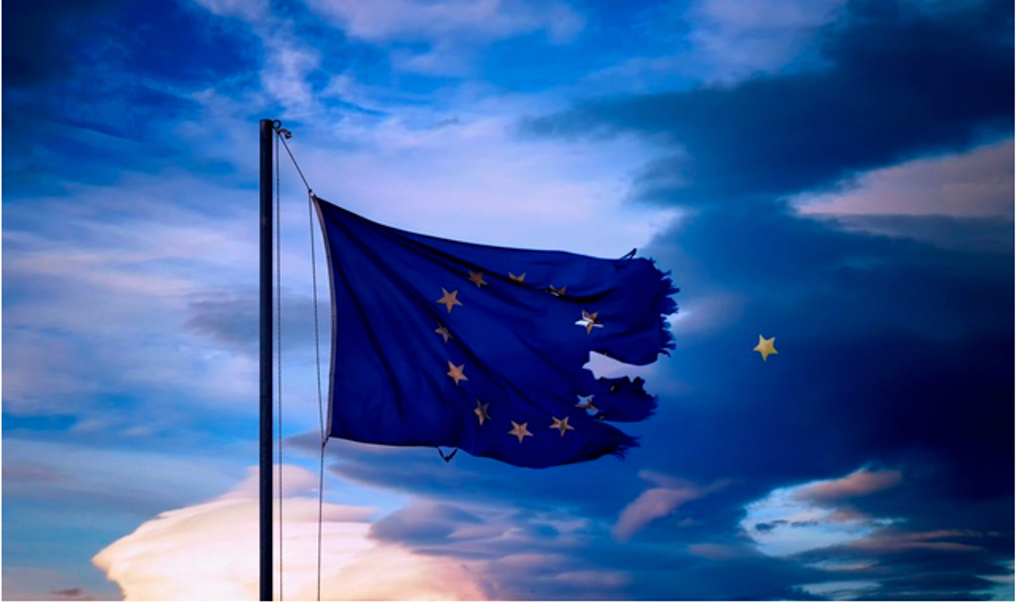 By Gilbert Mercier –Associate Editor at The Indicter Magazine–  The European Union is under numerous existential threats. On one hand, there are the internal threats, with the rise to power of the so-called nationalist-populist eurosceptics — who are in reality racist neofascists — in Austria, Hungary, Poland, and to a lesser extent Italy, where the Interior […]

–Associate Editor at The Indicter Magazine–

The European Union is under numerous existential threats. On one hand, there are the internal threats, with the rise to power of the so-called nationalist-populist eurosceptics — who are in reality racist neofascists — in Austria, Hungary, Poland, and to a lesser extent Italy, where the Interior Minister Matteo Salvini is an influential part of the country’s coalition government, plus the recent gains in political clout by anti-EU far-right parties such as the Rassemblement National of Marine Le Pen, in France. On the other hand, there are the external threats, which used to be secretive but are becoming more overt, from the Trump administration in the United States through the unofficial operative Steve Bannon, and to a lesser extent Russia, perhaps China, and even Iran’s Islamic Republic on monetary issues. Go figure. It seems that a downgrade, or even dismantlement, of the EU as a major geopolitical player suits the needs of other leading world powers. There is a cautionary tale here for Europeans, especially those like the Gilets Jaunes who reject the Europe of bankers and technocrats. It is a geopolitical cautionary tale about reforming what you have and not jumping to conclusions and doing a tabula rasa of an EU adventure that has been 62 years in the making.

In an era of Cold War redux, the EU is a geopolitical imperative

The EU was signed into existence in the 1957 Treaty of Rome by six founding members: Belgium, France, The Netherlands, Italy, Luxembourg and West Germany. This treaty must be understood in the context of a post-Yalta world, which effectively started the split of world influences between the two empires born out of the ashes of World War II: the United States of America, of course, and the USSR, which have agreed to disagree on ideologies but come to a tacit understanding about spheres of influence. The conflicts between the two blocks have manifested themselves through various proxy wars at the expense of third parties. The US came up with NATO in 1949, using the fear of the supposed Soviet threat to subjugate its European allies, which became not much more than vassals. Behind the legendary Iron Curtain, Stalin’s USSR had the Warsaw Pact.

Since the Ukrainian crisis, five years ago, we have reentered a Cold War logic, with Russia being painted by Western mainstream media as the biggest threat to the supposed free world, and Vladimir Putin as the ultimate bogeyman head of state. It took some courage for the six founding members of the Treaty of Rome to take this initiative, considering that all had US troops occupying their countries. This timid start in the mid-1950s was followed by attempts to make the EU, not only an economic union but also a political force.

The current legal framework of the EU and cornerstone of its political framework is the Treaty of Lisbon, which is an amendment of the Maastricht Treaty of 1993 that is in force today. The Treaty of Lisbon was signed in Portugal on December 13, 2007, but it took two years to be ratified by all EU members, and it became a legally binding agreement for all members on December 1, 2009. In this treaty, which BREXIT has put to a serious test, Article 50 established the provision that “Any member state may decide to withdraw from the union in accordance with its own constitutional requirement.” In the case of BREXIT, this was after an exit from the EU was voted on by British citizens, and this referendum narrowly won.

In the case of BREXIT, which could turn out to be disastrous for the welfare of British people, and even the influence of the former British Empire, it was not the famously nefarious hand of Vladimir Putin that was involved, as claimed by many in the UK, but actually the hand of Steve Bannon, through the shady firm, Cambridge Analytica, using the vast assets of the Mercer hedge fund. This hedge fund finances Alt-Right sites such as Breitbart. This being said, to be fair, Mercer’s nemesis, the billionaire George Soros, invested heavily in the No-BREXIT vote. So yes, there was foreign influence in the BREXIT vote, but it was a Robert Mercer vs George Soros confrontation between two conflicting visions of globalization, each one as toxic as the other. Mercer and Co.’s instrument, Steve Bannon, who is now operating in Europe to trigger similar scenarios like FREXIT for France, is in reality advancing the neocon US world domination Project for the New American Century.

In a better-known fight between the same puppet masters, it was Bob Mercer’s cash and Steve Bannon’s media savvy that arguably elected Donald Trump US president in 2016, against a Clinton campaign that was partially financed by George Soros. In both cases, Soros lost. Regardless of the pseudo-ideological bickering, and Mercer’s phony libertarian views, imperialism remains the hallmark of US foreign policy, as it has been since 1945. Allies are vassals, and any State that attempts to be independent is not a competitor but an enemy. A politically strong EU, with its own military independently of NATO, would be perceived as a threat by the American Empire.

The neocon United States of Trumpism: Main enemy of the EU

A recent policy change in Washington went almost unnoticed by European observers, although it was of great symbolic importance. The Trump administration downgraded the EU’s official representation from an embassy to a mere delegation with an office. This illustrates the US view of the EU as being cumbersome and redundant in its foreign policy agenda. This stand of Trumpism, controlled by the neocon John Bolton, is reminiscent of what the neocon Donald Rumsfeld called, in the build up to George W. Bush’s 2003 Iraq war, the Old Europe. A compliant New Europe was wanted, as opposed to the not-so-subservient Old Europe, personified by French President, Jacques Chirac, who was unwilling to join the invasion of Iraq. France was not then part of NATO.

Let’s face it. The neocons control Trump’s foreign policy and are pursuing more than ever their goal of uncontested US world domination by all necessary means: political, economic through sanctions on countries they declare to be enemy states, and in cases of last resort, through the armed fist of US imperialism, which is NATO. Those are the US policy imperatives defined almost a quarter century ago in the Project for the New American Century, the neocon bible and opus.

What the demagogues of the European far-Right in Italy, Hungary, Austria, and Poland, as well as neoliberal governments in Germany, Spain, and the UK are not telling their populations, while they posture about nationalism, is that their countries are occupied by US troops. In the case of Poland, they are eager to host more American occupiers. The ultra neocon deep-pocketed think tank, The Heritage Foundation, which is providing a lot of top-position appointees to the Trump administration, gloats about the US empire’s military strength in Europe, and of course frames the narrative in terms of deterrent against semi-fictitious potential Russian aggressions.

Seventy-four years after the end of World War II, about 65,000 active US troops are deployed in Europe, in around 17 main operating bases, mainly in Germany, Italy (Mr. Salvini, how about Italian sovereignty?), the UK, and Spain. Deployments are in the works in Poland, at the request of the far-Right government. The Gilets Jaunes and some European politicians are correct: EU nations should break free from their servitude to giant multinational corporations, financial institutions like the IMF and World Bank, as well as nefarious State players like Saudi Arabia, Qatar, and the United Arab Emirates. But the real masters are not in Bruxelles, they are somewhere in the United States, around Washington DC, shuttling between the Pentagon, White House, CIA, and Wall Street.

Despite the claims of the US administrations, either Democrat or Republican, and their vassals in Europe and Canada, NATO’s wars in Afghanistan, Iraq, Libya and Syria were not meant to be won on the battlefield, but rather to become semi-permanent occupations for the exploitation of natural resources. This first-wreck-then-exploit strategy has been especially applied in the Middle East by toppling Saddam Hussein and Qaddafi. In Iraq and Libya, two failed states were, either on purpose or by default, engineered by NATO. Because of Russia, Hezbollah, and Iran, the same plan, with the minute variation of using ISIS as a proxy, failed against Bashar al-Assad in Syria.

Afghanistan has been called the graveyard of empires: rightly so in the cases of Alexander the Great, the British Empire and the Soviets. NATO, and especially Europeans should have known better than to venture into such a dangerous land as invaders. However, America Empire Inc. and its financial, economic and military might thought they could break the will of the Pashtuns. They didn’t.

The European Union must become for the people by the people

In December 2010, I was, to my knowledge, the first analyst to forecast the collapse of the current dominant global empire. The madness of Trumpism might help along that process. A redefined EU for the people by people, following the lead of the Gilets Jaunes movement, might help us to free ourselves from the shackles of a globalization that only benefits a minute portion of the population worldwide. The EU can be remodeled rather than destroyed. Once it stops serving as the little helper of corporate imperialism, it might become an inspiration of real conviviality for other continents, a truly multi-ethnic and multi-cultural association of people, more than States, which departs from the dead end that is our global capitalist system.

Editor’s Notes: Gilbert Mercier is the author of The Orwellian Empire. Photographs one by Theophilos Papadopoulos, two by Looking for Poetry, five by Gage Skidmore; six by Ian Glover, seven by Jason, eight from the archives of Resolute Support Media, nine from the archives of NATO, eleven by Radiowood; and composites ten and twelve by Jared Rodriguez.