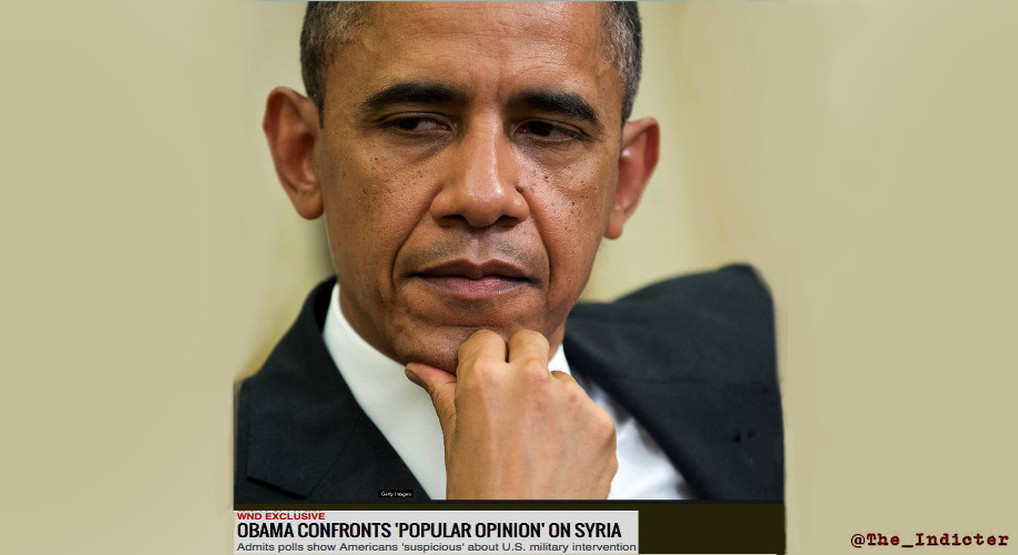 By Andrew Kreig, J.D. Director of Washington-based Justice Integrity Project and member of The Indicter Editorial Board. The Obama administration in December ramped up military actions against Islamic State terrorists — and also sharply downgraded its failing campaign to overthrow Syria’s government and to demonize Russia’s. A key juncture occurred when Secretary of State John […]

Director of Washington-based Justice Integrity Project and member of The Indicter Editorial Board.

The Obama administration in December ramped up military actions against Islamic State terrorists — and also sharply downgraded its failing campaign to overthrow Syria’s government and to demonize Russia’s.

A key juncture occurred when Secretary of State John Kerry (shown a with President Obama in the White House Oval Office) then traveled to Moscow for meetings Dec. 15. Before the trip, Kerry, Obama and their staffers had been issuing their usual denunciations of Russia and Syria’s President Bashar al-Assad.

By week’s end, the United States and Russia had joined forces in a 15-0 UN Security Council vote Dec. 18 creating a peace process for Syria over the next 18 months.

A sense of the devastation is illustrated by an exclusive RT video report Dec. 23 drawing on drone viewpoints of the Damascus suburb of the Jobar neighborhood, once home to some 300,000 and now a virtually empty wasteland of destroyed buildings aside from holdout rebels hiding in an elaborate network of tunnels.

Meanwhile, President Obama chided Republicans in an NPR interview aired Dec. 21, for what he called a lack of realistic alternatives to his anti-ISIS policies, as reported here.

Important changes are occurring at a rapid clip. A major new analysis by famed investigative reporter Seymour Hersh seemed already outdated in part when it first became available electronically Dec. 20, with a print date of Jan. 7, 2015 for publication by the London Review of Books. In the 6,831-word Military to Military, Seymour M. Hersh on US intelligence sharing in the Syrian war, Hersh reported concerns by top Pentagon brass that Obama seemed unduly wedded to a “Cold War” view emphasizing Assad’s ouster, trust in Turkey, and opposition to Russia instead of a priority focus on defeating ISIS.

Hersh’s deep contacts within the intelligence and military communities lend authority to his arguments (and also support much of the analysis below) even if the Obama administration appears to have adjusted course rapidly in advance of the column’s publication. 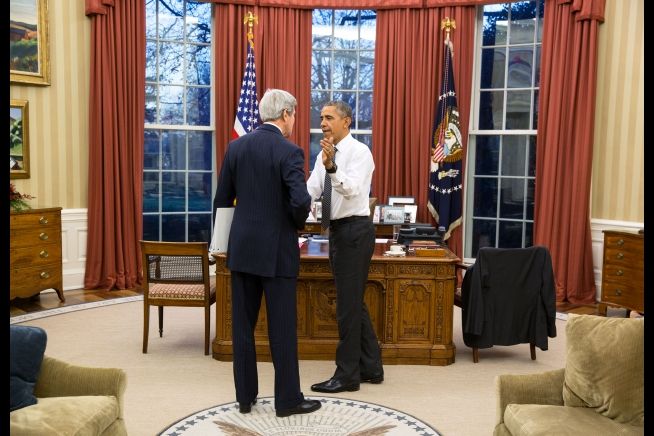 With this introduction, we sketch the remainder of this column:

At the outset, it’s useful to understand that the UN process is likely to prove unworkable because it does not require Assad’s resignation, as demanded by American war hawks and Islamic rebels who are backed by Turkish and Gulf State supporters.

The UN plan also fails to specify which rebel groups are excluded as terrorists from the peace process. That confusion portends continuing stalemate during next year in a pattern that has doomed previous UN efforts to resolve the Syrian war.

Despite the dim outlook for a UN peace plan, it serves as a face-saver for Obama during the last year of his presidency. Obama can side-step the consequences of his years of covert warmongering in Syria, which has primarily advanced the empire-building agenda of special interests under the rhetoric of humanitarian and democratic values. Middle East Eye’s Dr. Gareth Porter amplified the reasons in Why the US pushes the illusory Syrian peace process.

Most importantly for the American public, the UN agreement could contain pressures from political demagogues risking another war. Warmongering is popular with candidates so they can win 2016 presidential support from special interests and low-information voters fooled into thinking ISIS can be eliminated by bombing. But ISIS is just one of the many scores of jihadist groups in Syria and Iraq that readily swap arms and allegiances when pressure mounts.

Fortunately, Obama backed off from the brink of a fight with Russia that could have become extremely serious. The public may not know how serious for years because, as in the 1962 Cuban Missile Crisis, it’s not in the interests of either Russia or the United States to discuss specifics.

Kerry met behind closed doors Dec. 15 with Russian Foreign Minister Sergei Lavrov and Prime Minister Vladimir Putin (shown in a photo from their meeting). They emerged with an agreement that omitted any mention of Assad’s departure.

The most likely reasons for the U.S. shift?

The Obama administration is under increasing pressure to become more effective against ISIS following the Paris and San Bernardino attacks, as Obama acknowledged in his Dec. 21 NPR interview.

In contrast to a go-slow approach by the United States under Obama’s anti-ISIS envoy John Allen, Russia began a bombing campaign Sept. 30 at Syria’s invitation. Since then, Russia has made hundreds of bombing runs providing devastating air cover for Syrian army advances regaining territory from rebels.

Russia also has been exposing fighter, arms, and oil smuggling connections between ISIS and allied forces. The major smuggling routes have been via Turkey, a NATO member whose President Recep Tayyip Erdoğan increasingly focuses on supporting Islamist causes and suppressing dissent. Turkey has viciously targeted those in the media and ethnic Kurds whose compatriots in Syria are the main U.S. allies on the ground fighting ISIS.

Turkey’s genocide of an estimated 1.5 million predominately Christian Armenians beginning a century ago is one the many regional feuds relevant to the Syrian conflict but ignored by most Western news reports for fear of antagonizing Turkey, whose leadership is offended at reference to the deaths.The United States recruited Turkey into NATO more than five decades ago to help surround the Soviet Union, and has valued Turkey’s long time rivalry with Russians ever since.

Most independent scholars describe the Armenian deaths as a “genocide” undertaken as Turkey geared up to fight with Germany in the first World War against Russians and Western allies, which included the United States. Many of the Armenians were women and children forced to march from Turkey into Syria’s desert and left to die.

Fast forward: The unrest in Syria began in early 2011 with mass protests that were brutally suppressed by government authorities.

In the summer of 2011, some government military commanders defected to fight against Assad, a British-educated medical doctor who succeeded his father as a secular (non-religious) strongman opponents classify as a dictator. He is from the minority Alawite sect of Islam, whereas his wife is from the majority Sunni population. Much of the pre-war Syrian population has been from minority religious or ethnic backgrounds, including Christians and Kurds, who chafed under Assad, as did many Sunnis. But many (including Sunnis) have witnessed much harsher treatment from ISIS and other rebels.

Rebels built an armed movement under expatriate leaders at the outset. The rebellion has been augmented with covert CIA, Saudi, Qatari and Turkish support and what has been estimated as some 70,000 foreign jihadists from 100 nations, including veterans from previous Middle Eastern wars whose citizenship in European nations enabling easy travel has raised special concern there because of the migrant crisis.

Yet after all the devastation of nearly five years, or perhaps because of the destruction creating millions of refugees and at least 250,000 deaths, Assad remains in power. He retains significant strength as a leader even among Sunnis, Christians and others not part of his Alawite faith, given the apparent alternatives of war and a harsh Islamic regime in what had been a non-religious state. Indeed, one commentator has cited a recent independent poll by a British company for a column headlined, Assad is more popular in Syria than Obama and Hillary are in the United States.

In contrast to the corporate-controlled media, alternative media outlets have long been reporting that U.S-led NATO and the six-nation Gulf Cooperation Council of Saudi Peninsula oil-rich monarchies (shown on the map at right) have long been coddling ISIS with only occasional heavy damage. Allied forces helped Kurds destroy ISIS forces near the Turkish border town of Kobani while Turks prevented Kurdish reinforcements or aid.

Those allegations that allies in effect support terrorists as part of a sinister strategy to overthrow Assad for various reasons are beyond our scope today. But the allegations appear in the international media, most notably those emanating from Russia and Iran. They have been reported in such unlikely outlets as the hawkish Washington Post after Iraq’s prime minister claimed that rogue allied forces have supported ISIS.

The disillusioned Wilkerson shared his reflections in the interview below, entitled, Bush Military Official: The Empire’s Ship is Sinking. [Click on image below for the video].

In October, the U.S. replaced the former general John Allen following more than a year as Obama’s anti-ISIS commander. Defense One reported on his track record in largely neutral terms that inevitably showed a lack

The reason was undoubtedly his juggling act whereby important U.S. and allied interests (including Turkey and Saudi-Arabia) clearly want Assad’s removal even more than destruction of Islamic jihadists. Allen, shown at left, is a former colleague and ideological ally of former CIA Director David Petraeus, a neoconservative hero shown below at right who has been advocating a U.S. alliance with Syria’s Al Qaeda factions (which at times work with ISIS) to overthrow Assad.

Even so, the Obama team’s talking points until a week ago placed at least as great a priority on removing Assad than on thwarting ISIS.

These big changes are important for the world.

Atttorney Andrew Kreig, J.D., M.S.L., is a Washington, DC-based author, investigative reporter, attorney, and non-profit executive who founded the Justice Integrity Project (www.justice-integrity.org) to expose threats to democracy and human rights. Active in researching political prosecutions, torture, illegal surveillance, and media bias, his most recent book is Presidential Puppetry: Obama, Romney and their Masters (www.presidentialpuppetry.com). Andrew Kreig began his career as a reporter with the Hartford Courant, America’s oldest (1764) newspaper still in publication, and obtained law degrees from Yale and the University of Chicago. He has since written and spoken widely for mainstream and alternative audiences. These include appearances on more than a hundred commercial broadcast stations, lectures on five continents, and human rights reports for the Huffington Post and The Professors’ Blog.