Editor’s Note: Prof Marcello Ferrada de Noli was in recently interviewed by the Russian network RT. Here below the replies in text, sent to RT after agreement. A segment of the interview was broadcasted in RT News April 6, 2020. /Dr Lena Oske, Acting Editor at The Indicter Magazine. Text updated April 7, 2020, and other updated graphics added during May-June 2020.

RT·  What do you think of the recent situation with coronavirus in Sweden?

The epidemic development of the corona virus in Sweden is not especial. The virus behaves and spreads under the same predictable procedures than elsewhere. What makes the situation of Sweden so particular in regards to others countries, is partly the premature and naïve conclusions of the authorities, and partly their strategy adopted in dealing with this catastrophe. On the 6 of February, the head of the Swedish Public Health Agency, Johan Carlson, declared to Svenska Dagbladet, “The corona virus will not spread in the Swedish society under current circumstances. We can have occasional cases, and occasional secondary cases within families –it cannot be avoided.” One month after (7 February), the Swedish State Epidemiologist Anders Tegnell said to Aftonbladet he believes “the epidemic in Sweden has reached its peak”.

The facts are instead that as of today (2 April 2020) the Public Health Agency  has reported  a total of 280 fatalities But that number was 146 only three days ago. This means an almost double increase of the total deaths statistics of in only three days. We have today 5,466 confirmed cases infected with the virus, compared with 4,028 three days ago. The described epidemiological curve appears no less devastating than in other countries.

Another difference in the situation with coronavirus in Sweden, is that main decisions to deal with the epidemic are not taken by the government, or the elected Parliament, but instead by officials employed in the Public Health Agency and other health-related institutions. Government ministers and political leaders have said they trust their experts. In turn, these officials are not liable of prosecution if they would fail in their analysis and recommendations. To the best of my knowledge, such legislation do not exist in Sweden. 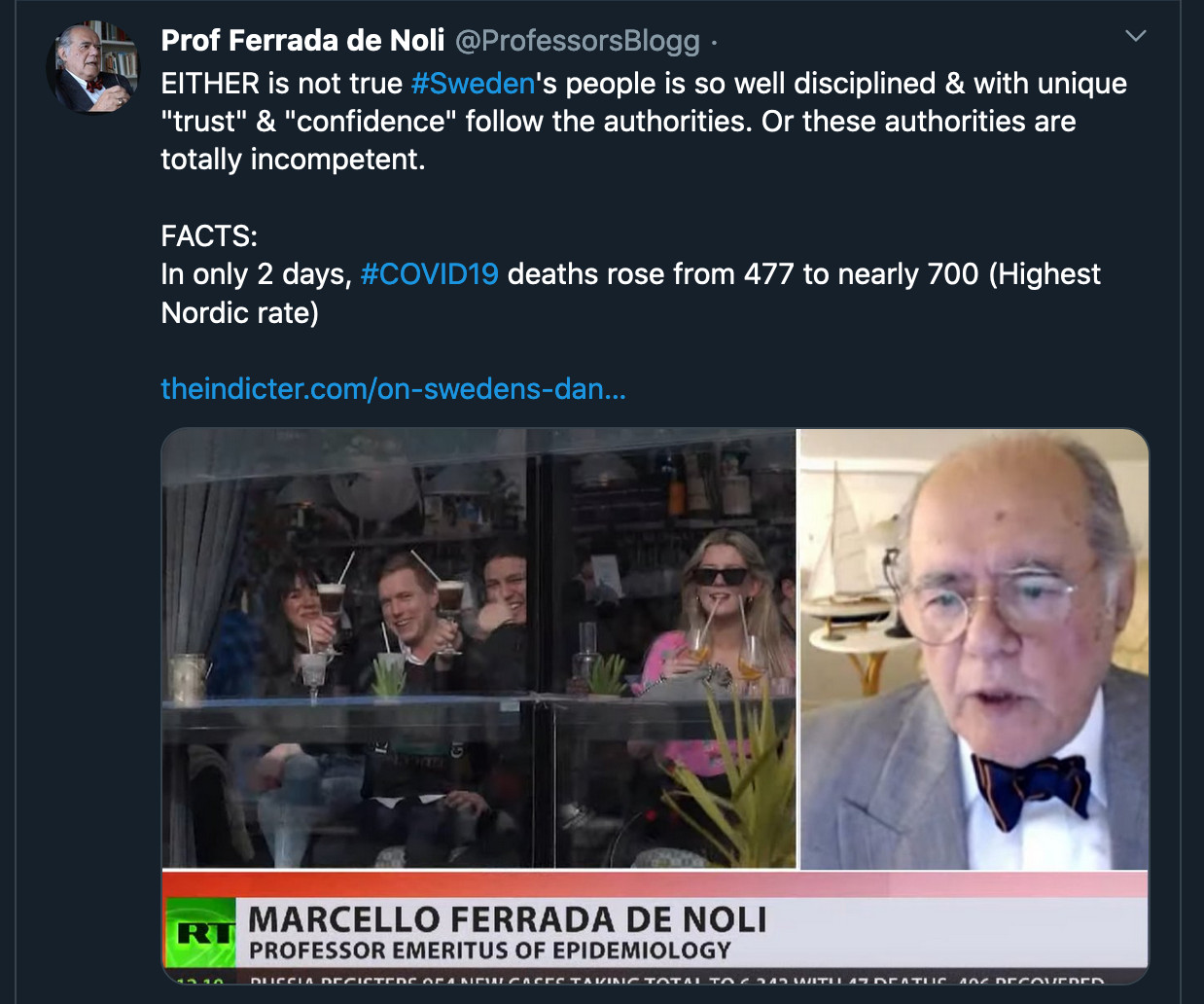 RT·  Sweden uses quite a liberal approach, not imposing strict quarantine measures. How dangerous can it be?

In my opinion it is not a liberal approach in the sense of searching for new, creative solutions as alternative to purported failed experiences (a variety of Asian countries have empirically demonstrated positive results in their approaches). It is rather the opposite, a rigid attitude based in the arch conservative self-appraisal that Sweden has certain positive idiosyncratic characteristics, different to others, ‘less fortunate’ countries. Recently, the Swedish Minister of Foreign Affairs Anne Linde received the following question amidst a reportage around her visit to Ukraine, published in Dagens Nyheter 30 March 2020: “Why no other country follow Sweden’s way?” The Foreign Minister replied: “- I think one of the biggest positive things in our society is that we have confidence. We still have a lot of trust, in each other, but also in the authorities and politicians”. She added that the public follows (the authorities)  decisions and take personal responsibility.

The above is, however, highly discussible. For instance, a known Swedish author, Elisabeth Åsbrink, has recently suggested that this named “trust” –which often the international media report as the Swedish own weapon against this aggressive virulent epidemic–  could instead be simply “naivety, or passiveness, or laziness, or even a despise for the elderly”.

In my opinion, the propaganda and agitation done by Swedish authorities around the values of ‘trust’ and ‘self-responsibility’ ascribed to the Swedes, may serve to exempt the authorities’ own responsibility.  They would say, in case the epidemic derails in catastrophe, it was up to the people to follow or not our ‘recommendations’, which they did not. If things get worse, it is people who has themselves to blame.

The unpreparedness, or in cases, straight negligence by the authorities regarding insufficient available stocks of intensive care beds, ventilators, protection gear, etc. is then diluted amidst the main signalled responsible: peoples’ behaviour. As a matter of fact, Sweden scores the next lowest place among European countries regarding numbers of critical care beds, being its number of intensive care beds only 5,8 per 100,000 population – half of what Italy had to fight the current epidemic. During the Göran Persson’s government in the 90’s,  Sweden dismantled and/or or given away most part of the emergency hospitals and field hospital and corresponding life-saving equipment the country had kept stored in case of mayor catastrophes.

And yes, the current authorities’ liberal approach can be dangerous in the context of this disaster, both for the public and the health professionals taking care of the sick. One expression of this ‘unique, independent road’ exercised by the Swedish Public Health Agency is their contempt for WHO guidelines regarding protecting gear for the hospital personnel and other confronting the infected patients. Which may have resulted in the current numbers of doctors and nurses infected by the virus. Again, the significant scarcity of protecting outfits for Sweden’s hospital personnel –as it has been known in the press–  cannot be attributed to more or less degree of ‘trust’ of which the Swedish people should be responsible. Neither it could be attributed to the people’s responsibility that Sweden’s authorities are confronting this medical crisis amidst shortages in protecting equipment and even antibiotics in regard to the menacing needs. The exact shortage figures are kept secret to the Swedish public.

RT·  On the other hand, neighboring countries plan to shut the borders completely, blaming Sweden. Is it a right reaction?

I have full understanding for our neighbour countries’ need and corresponding decisions of protecting their own population. It is, in my opinion, an epidemiologically sound measure.

RT·  Can we expect the changes in Swedish approach towards coronavirus? What should be done?

We have to observe that the Swedish approach is function of a variety of factors. Health care and epidemiological considerations is only one. Economy considerations have also been a potent factor weighing in the decisions –for instance, of not closing schools so people continue going to their works. But, as I can see, reasons of Swedish national security, as viewed by pro-NATO political elites, may also play a determinant role.

One aspect that it could be determinant Sweden to contemplate change its approach in the strategy against this epidemic, is whether Sweden will pursue in the realization of the military  drill named Aurora 20, to take place in Southern Sweden on May this year. In spite that several countries such as Germany, Canada, possibly Austria, etc, have announced they will not participate, the US is still in the plans.

As recent of 2 April 2020, the US publication Defense News reported declarations done by the Spokesman of the Swedish Armed Forces, who would have mentioned “it was utterly important for Sweden to arrange the drill in the wake of the new coronavirus pandemic to show that, ‘when the society is in a crisis, the defense must be at its strongest’.”

Of course it would be impossible for the Swedish authorities, or undefendable in front of the Swedish people, on the one hand adopting stricter protective measures against the epidemic –such as lockdown or social contact prohibition for more than two people together– and on the other hand allowing the implementing of the Aurora 20 drill comprising a massive participation of forces “invading” portions of  a region already demonstrated vulnerable to a high contagious rate.  The reminding of the “Spanish flu” pandemics (which ultimately killed about 50 million people after the disease was brought to Europe by US soldiers during WW1), would quite possibly grow in peoples mind, even thou the comparison would not be accurate.

Nevertheless, a further worsening of the pandemic panorama would eventually force the stubborn Swedish health authorities to choose between a) deepening a NATO collaboration at the risk of people’s prospective health deterioration, and b) to pay consideration that in Sweden the percent of people opposing the affiliation to NATO is higher than the percentage of people favouring it. 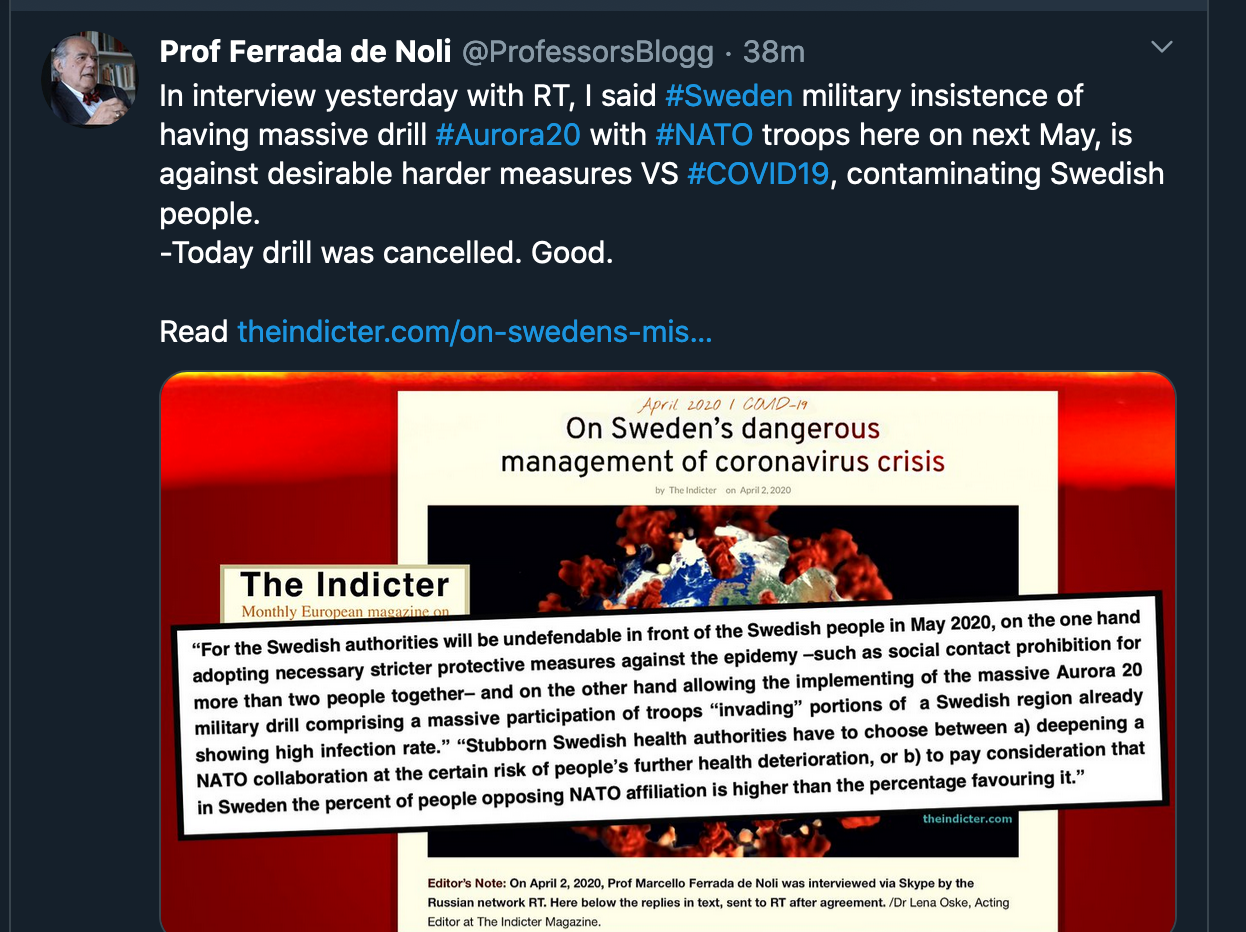 RT·  As an epidemiologist, what piece of advice can you give on how to save yourself from coronavirus?

To the Swedish authorities I would demand to change their mindset. This is not about prestige, but about responsibly maximise measures towards saving people’s life. I would recommend mass testing, in the highest rate possible. Particularly among the elderly and populations at risk on the base of concomitant, non-treated diseases and other vulnerabilities. Such socio-economic, ethnic-minority related, etc. Testing allows the identification of infection clusters, and the ensuing isolation of cases.

I would ask for changing the financial/economic priorities. To think less in ‘saving’ big corporate business and more in saving lives of Swedish people. Instead, to direct appropriate industries to the immediate fabrication of medical equipment, and related supplies.

I would ask for transparency in the statistic output. People have the right to know which other fatalities may have also resulted because of the changing of the priorities in emergency hospitals and health-care establishments. As an illustration of collateral fatalities among the elderly: In Coccaglio, Italy, a Lombardy town of 8.700 people, had only 85 deaths in all year 2019. Now in only March, the town recorded 56 deaths –of which only 12 were officially attributed to the coronavirus.

Finally, I would ask the authorities to be consequent with their statements of protecting the elderly. Do start by testing the elderly at risk. Initiate –in a centralized effort done by the authorities– the supply of needs to the elderly, all now being asked to remain self-isolated. To leave that Samaritan task on the good will of neighbours –which in cases may be non-existing– matches poorly with a nation that proudly, at the times of the honourable Olof Palme, stood for solidarity, peace and non-alignment. 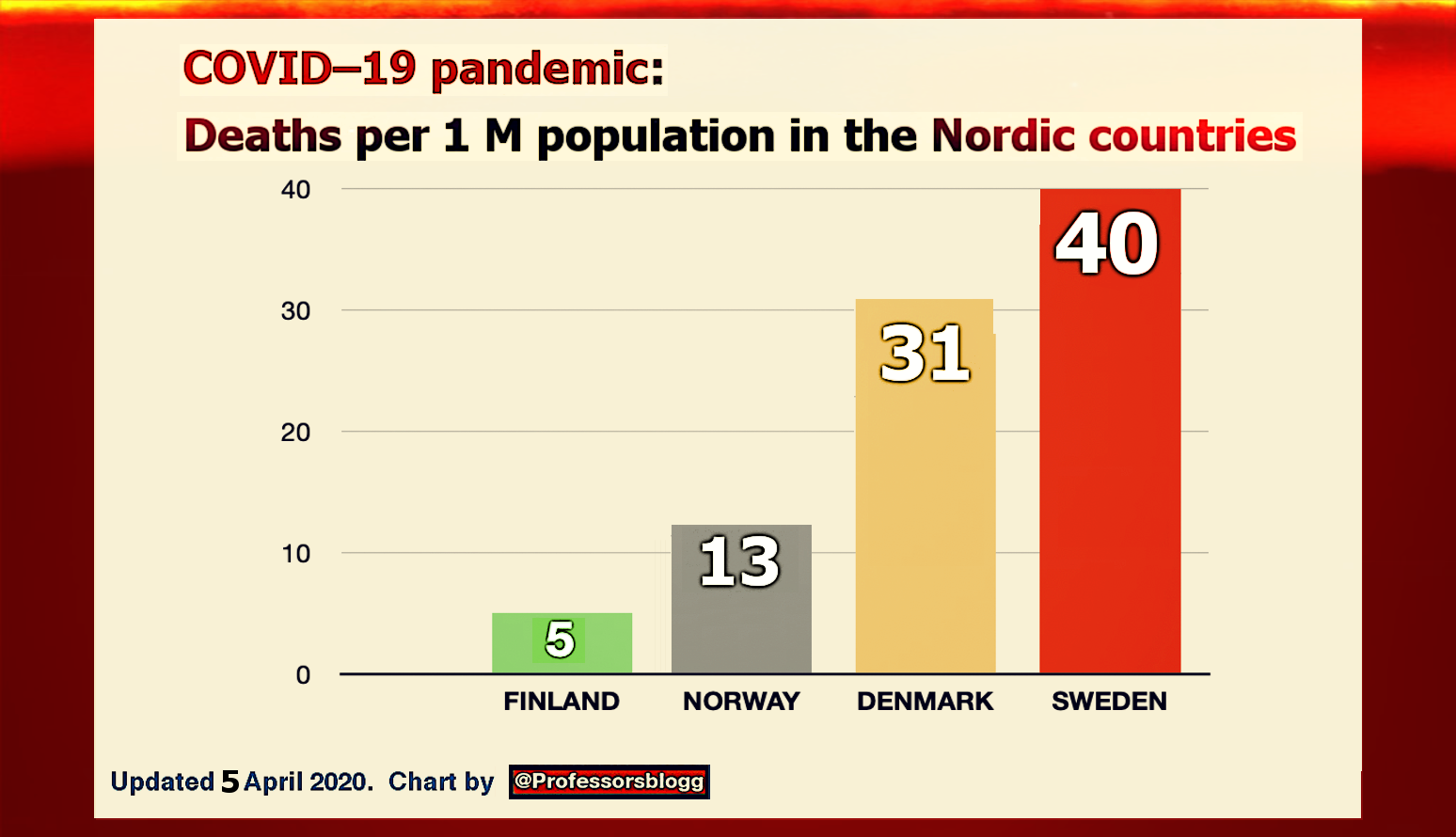 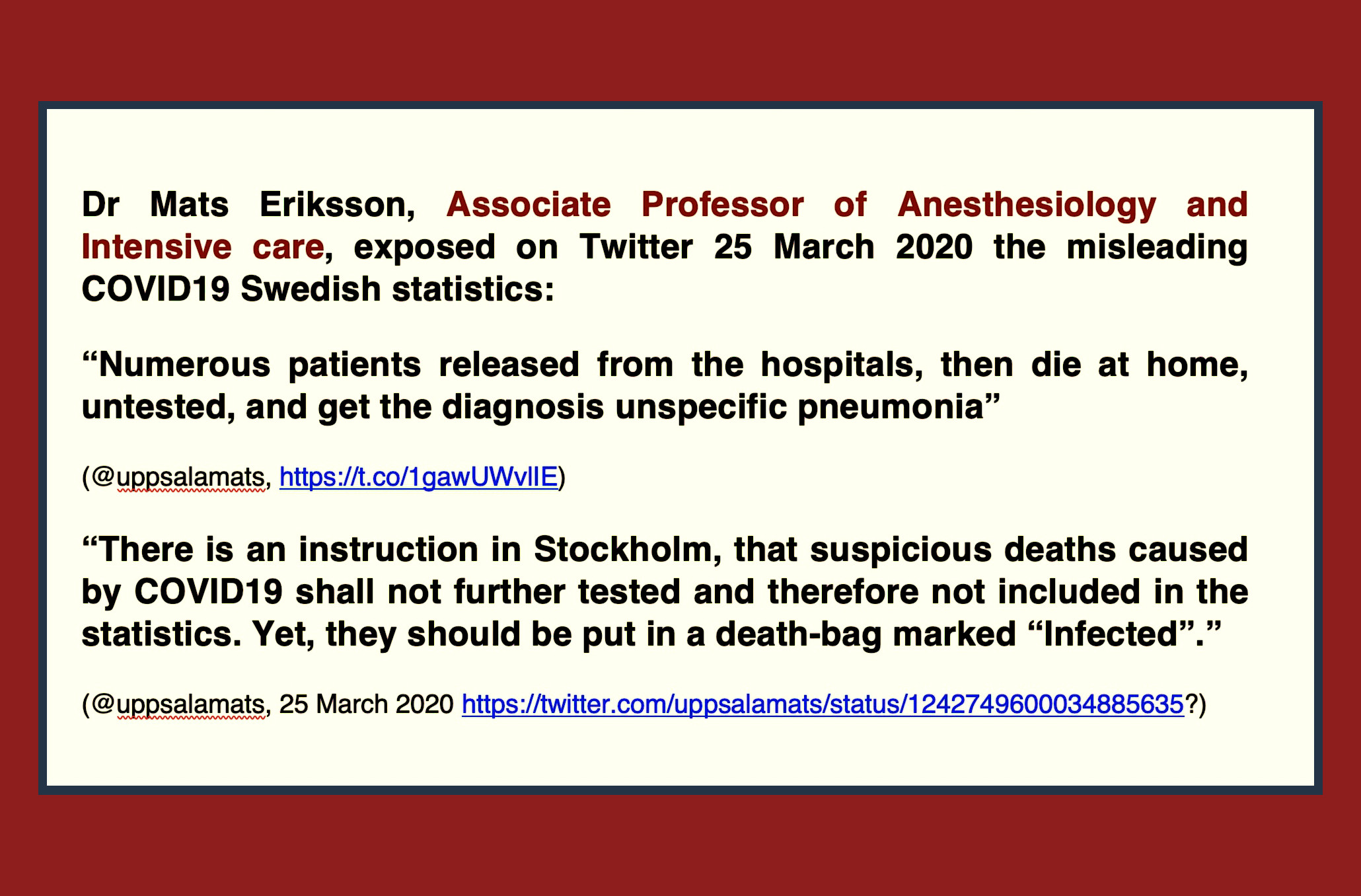