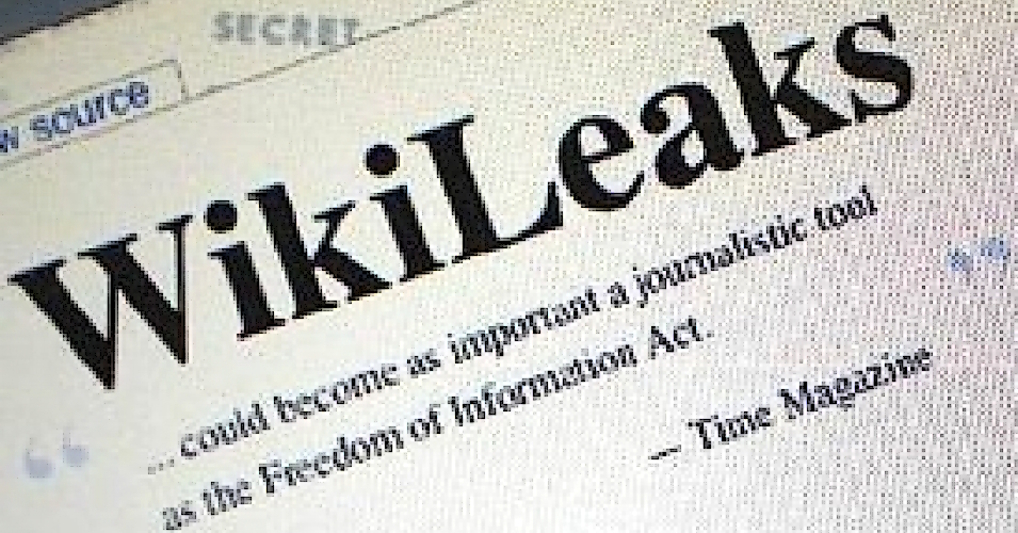 By Nozomi Hayase PhD. Member of The Indicter Editorial Board. US authorities are reported to have prepared charges to seek the arrest of WikiLeaks founder Julian Assange. This overreach of US government toward a publisher, whose principle is aligned with the U.S. Constitution, is another sign of a crumbling façade of democracy. The Justice Department […]

US authorities are reported to have prepared charges to seek the arrest of WikiLeaks founder Julian Assange. This overreach of US government toward a publisher, whose principle is aligned with the U.S. Constitution, is another sign of a crumbling façade of democracy. The Justice Department in the Obama administration could not prosecute WikiLeaks for publishing documents pertaining to the US government, because they struggled to determine whether the First Amendment protection applied in this case. Now, the torch of Obama’s war on whistleblowers seems to have been passed on to Trump, who had shown disdain toward free speech and even called the U.S. media as “enemies of the people”.

Earlier this month, CIA Director Mike Pompeo vowed to end WikiLeaks, accusing the whistleblowing site as being a “non-state hostile intelligence service often abetted by state actors like Russia”. He also once called Edward Snowden a traitor and claimed that he should be executed. This declaration of war against WikiLeaks may bring a reminiscence of George W. Bush’s speech in the aftermath of 9-11, where he said, ‘either you are with us or against us’, and urged the nation to side with the government in his call to fight global ‘war on terror’.

In a recent interview on DemocracyNow!, journalist at The Intercept, Glenn Greenwald put this persecution of WikiLeaks in the context of a government assault on basic freedom. He spelled out their tactics, noting how the government first chooses a target group that is hated and lacks popular support, for they know attacking an idea or a group that is popular would meet resistance. He explained:

“…. they pick somebody who they know is hated in society or who expresses an idea that most people find repellent, and they try and abridge freedom of speech in that case, so that most people will let their hatred for the person being targeted override the principle involved, and they will sanction or at least acquiesce to the attack on freedom because they hate the person being attacked”.

Demonizing and scapegoating of a particular group or organization is an alarming tendency toward an authoritarian state. At a news conference last Thursday, Attorney General Jeff Sessions also chimed in to emphasize how Assange’s arrest is a priority. This targeting of WikiLeaks is a threat to press freedom and could be seen a slippery slope toward fascism.

Recall the Weimer Republic just before the rise of Adolf Hitler. He was successfully able to install hatred in the minds of Germans and carry out massive crimes against humanity. Americans often wondered what made many ordinary Germans accept these horrendous acts that led to the holocaust. Now, in Trump’s America, it is not so far a stretch to say that Muslims, Mexicans and other immigrants are becoming like the new Jews, to be a scapegoated under this right wing administration.

Once he gained power, Hitler made his word to be above the law. Trump, in his first 75 days in office, turned the rhetoric of hatred into action through passing executive order barring refuges and citizens from seven majority Muslim nations from entering into the United States and enacting mass deportation with the ICE agents acting like Nazi Gestapo to track immigrants. Draconian policies that were more under the radar during the Obama administration are now becoming overt. More and more, Americans might now be able to get under the skin of those ‘Good Germans’.

In Hitler’s Germany, persecution of Jews didn’t happen overnight. It was a gradual escalation. The first thing Hitler did was to control media and create an arm of propaganda. By using this weapon of mass deception, the Nazi Regime garnered popular support on a platform of racial identity and nationalism and managed to brainwash citizens with the Nazi-Auschwitz ideology of anti-Semitism. Under the guise of fighting communism, the Party suppressed civil liberties, free speech and association and expanded its power by demonizing whoever stood in their way.

Identity Politics and Machination of Power

The Trump campaign slogan “Make America Great Again” spoke to middle class America and disfranchised populations who were fed up with corporate plunder enacted under Democrats. His message of putting America first also struck a chord with white nationalists. By channeling their frustration and desires, Trump successfully created a fertile soil to harvest identity politics that is now coming to resemble Nazi’s emphasis of nationalism and racial supremacy.

No one can deny how the Trump victory empowered white supremacist groups that until now were more on the fringe. These identity politics that seem to be spreading around the world tend to contract one’s heart. Whatever the ideology is, progressive or conservative, anyone gripped with it falls into a narrow vision of humanity and loses perspective. This identity, fixed by ideology becomes a point of manipulation, to be exploited by those in power and used to divide everyone into ‘Us vs. Them’.

When people lose capacity for dialogue, they become deaf to their own humanity. Then, the state can easily exert control over the masses and seize power through manufacturing wars of all against all. We are now seeing a new civil war unfolding in America. The city of Berkeley is becoming a battleground. In February, riots erupted on the UC Berkeley campus when protesters shut down an event scheduled for right wing commentator Milo Yiannopoulos. Also, at the recent free speech rally on Patriot Day, Trump supporters, along with members of far-right nationalists clashed with local activists and anti-fascist groups. Ironically, the birthplace of the Free Speech Movement in the 60’s turned into a bloody fight, devolving into violence, with each camp acting totally contrary to the principles of free speech.

This attack against Julian Assange and WikiLeaks is not something new. Consorted efforts to delegitimatize the organization through character assassination and smearing of Assange have been persistent, ever since the site came to public prominence. Assange was called a high tech terrorist by former vice President Joe Biden and incitement for his murder came from high US officials.

Assange has been holed up in asylum in the Ecuadorian embassy for 5 years, despite a UN ruling clearly stating his detention is unlawful. This is not the first time he and his organization were declared to be enemies of the State. In 2012, the US military had designated them as such enemies.

So what is different now? The head of the CIA and the Department of Justice’s declaration of war against WikiLeaks comes in a particular political climate. These efforts to arrest Assange, now backed by President Trump are taking place at the height of a kind of McCarthy era style hysteria.

Just like the recent US government cruise missile attacks on Syria, carried out without any investigation or evidence that Assad was the one using chemical weapons, the echo- chamber of the liberal media has been amplifying their own speculation of WikiLeaks alleged source of DNC leaks and Podesta emails. With the narrative that Russia meddled in the US election, they branded Assange as a Putin sympathizer and/or Russian agent without backing it up. The Left’s seeming irrational obsession with Russia is also rooted in these identity politics, namely their allegiance to the Democratic Party and America’s post-cold war national identity, defined by a hysteric red scare and its mission of defeating communism.

In the wake of the possible arrest of Assange, the ACLU noted that, “prosecuting Wikileaks would set a dangerous precedent that the Trump administration would surely use to target other news organizations.” We must never forget where hatred-driven identity politics led Nazi Germany. Martin Niemöller, the famous Protestant pastor who spoke against the rise of Hitler and spent years in concentration camps, reminds us of this:

Fascism begins in the mind. Its seed grows whenever we accept hatred toward someone who has different or opposing views. Enclosure happens when we suspend critical thinking in the hype of fear and turn the other into an enemy. It happens every time we close our hearts, shunning those who have been made into our enemies. Democracy dies whenever we choose to pick up the sword of ideology, rather than choosing to uphold our common humanity and instead engage in a self-righteous crusade of defeating the enemy.

When Trump signed a Muslim ban into law, outrage spread nationwide and people rallied at airports. The U.S. Court of Appeals for the Ninth Circuit refused to reinstate Trump’s travel ban and so the solidarity of the people won. As Trump pressured to cut funds in sanctuary cities, these cities defied the order, assuring to maintain their immigrant policy. Now, the US government is coming after WikiLeaks, a transnational journalistic organization, who has no allegiance to any nation, governments or corporations, only to the conscience of ordinary people around the world.

In the darkness that hovers in the veil of ideology, whistleblowers shine a light, through which we are able to recover perspectives that were lost. WikiLeaks, through their act of publishing, lets everyone see views that are forbidden, marginalized or shunned. They are last line of defense and are on the front line in this battle for democracy. One may dislike WikiLeaks and disagree with Assange, but whatever one’s opinion is, we all need to stand up against this erosion of our civil liberties. Prosecution of WikiLeaks is persecution of free speech. Setting this precedent moves us down a dangerous path.