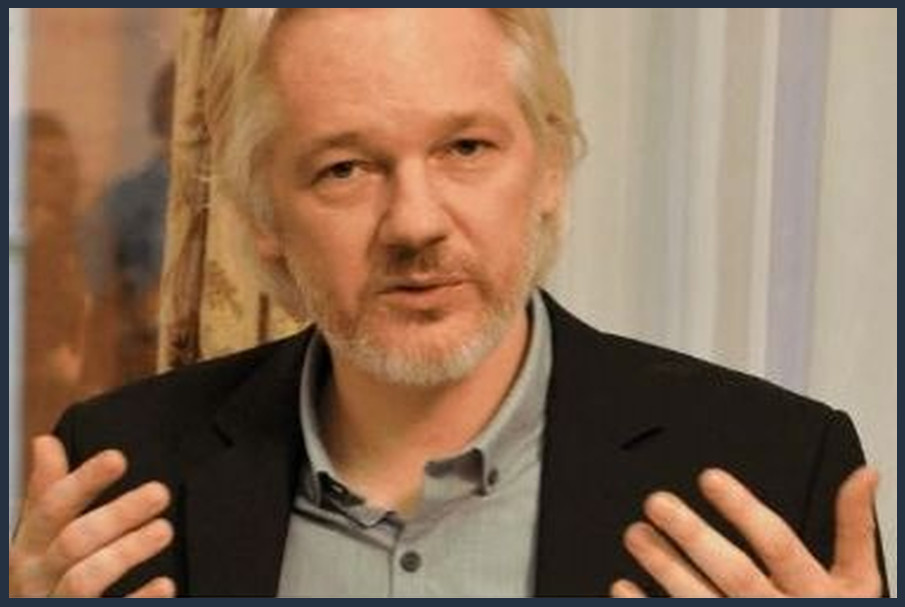 Five years after ‘Collateral Murder’, the secret US military video which made the Pentagon furious and WikiLeaks famous around the world, l’Espresso meets the WikiLeaks founder in the Ecuadorian embassy in London where he is holed up to ask whether he has changed his mind and goals

In a small apartment in the heart of London – far from the pomp of the embassies of Europe’s capital cities – a man has spent the last three years essentially confined to a room of roughly 20 square meters, after spending one and a half years under house arrest with an electronic manacle around his ankle. He is guarded seven days a week, twenty-four hours a day by Scotland Yard agents with at least two large police vans stationed outside the building, ready to arrest him the moment he steps foot outside.

It is this Ecuadorian embassy in London that “l’Espresso” has entered once again, five years after Julian Assange first made the greatest power in the world tremble, the United States, in April 2010, publishing “Collateral Murder”, a secret US military video showing an Apache helicopter killing innocent civilians in Baghdad.

From that April of 2010, nothing has been the same in the life of Assange, his organization, and his source: the young American soldier Chelsea Manning (formerly Bradley), who was immediately arrested, treated inhumanely for nine months and then sentenced to 35 years of prison for revealing the true face of the wars in Afghanistan and Iraq, the atrocities of Guantanamo and the secrets of US diplomacy.

A few weeks after Manning’s arrest, Assange himself ended up in a sex scandal which has never been clarified: he was arrested on rape allegations in London at the request of Swedish prosecutors. Five years after his arrest, the investigation into this Swedish case is still in its preliminary phase, as the Swedish magistrate has always refused to go to London to question him, leaving Assange in a legal limbo. In June 2012, the WikiLeaks founder petitioned Ecuador for asylum, taking refuge in the Ecuadorian embassy in London, concerned that if extradited to Stockholm for questioning, as the Swedish prosecutor insisted, he would be in danger of extradition to the United States, where he could face a harsh sentence for publishing the secret US documents.

When we arrive at the embassy in the late afternoon, the Scotland Yard agents smile at us. They are accustomed to seeing journalists around, but their friendly approach does not make their surveillance less shocking: to this day, Scotland Yard has spent over ten million pounds guarding Julian Assange.
Inside the embassy, security measures are strict, but the atmosphere is warm.

There are few people and few rooms: a kitchen and a bathroom of literally Lilliputian size, the ambassador’s office, the offices of the embassy staff and the room where Assange lives and works buried in computers, books, folders, presents, CDs and letters from around the world. The lack of natural light and fresh air only make everything more oppressive.

Whenever he appears in public, people often notice his pale skin, and the long beard that  diminishes his young computer geek look, but few grasp the strong determination of this man, who replied in 2010, to the German weekly “Spiegel” when asked why he had not chosen to use his computer skills to make money and pursue a more comfortable path rather than invest his talent in a risky endeavour like WikiLeaks: « I enjoy helping people who are vulnerable. And I enjoy crushing bastards». Five years after “Collateral Murder”, “l’Espresso” asked Julian Assange if he has changed his mind.

WikiLeaks has exposed the most powerful entity in the world: the US military-industrial complex and that complex has spent the last five years striking back with a neverending investigation against you and your staff. What do we know for certain about this US investigation?
«This year the US Department of Justice and the court system have said publicly that the investigation continues. We also obtained warrants from Google about our journalists and Google has said that they are still under gag order for many more, there are other companies that are similarly gagged. This year the offenses that the Department of Justice is attempting to apply were also revealed and they are: espionage, conspiracy to commit espionage, the violation of the Computer Fraud and Abuse Act, which is computer hacking or illegal transformation of data, theft of government data and general conspiracy. That’s where we are formally. This is absurd. It is outrageous. This investigation is believed to be the largest ever investigation  into a publisher, the US government in its own internal communications referred to it  as “a whole of government investigation”, and Australian diplomats communicating to the Australian government what the US had told them in Washington DC said that the investigation was of “unprecedented scale and nature”».

What is striking is the stark difference between the cases of WikiLeaks, Chelsea Manning and Edward Snowden and the case of general David Petraeus, the former head of the Central Intelligence Agency, who passed top secret information to his mistress. You, Manning and Snowden are confined, in prison, in exile, respectively, for publishing secret information in collaboration with worldwide media, whereas general Petraeus is free as the air: no serious consequences for him…
«There is not any pretense anymore that there is equality before the law. Dianne Feinstein, the head of the US Senate Intelligence Committee, continuously says that I should be prosecuted for espionage, and pushes strongly for that, however she also says that general Petraeus and his family has suffered enough because he lost his job. This is a significant double standard. It demonstrates their lack of accountability. It is part of the calculation of having power to project power, and one of the ways to project power is to show that you are unaccountable: we are untouchable, so don’t try to touch us. That is one of the reasons why they have aggressively gone after WikiLeaks, Snowden and Manning, because we hit them pretty hard and that makes them look very weak».

WikiLeaks experienced also a devastating extrajudicial banking blockade. The blockade and the neverending investigation are two of the methods used by the Western world to deal with organisations threatening the interests of the powerful. In Western democracies, journalists and activists are rarely killed: they are rather marginalised or silenced through legal and economic pressure. This is very bad, but quoting Chelsea Manning, “it is better than disappearing in the middle of the night”, as it happens in many regimes. Isn’t it?
«I used to say that the way things work in the West now is  journalists are not taken from their homes in the middle of the night, but rather homes are taken from journalists in the middle of the day, by making sure that they are fired by their employer or that they are litigated. In the United States and in the West broadly, there are many ways to shut up journalists that do not involve killing them, many ways to dilute, not necessarily censor, but to dilute out of existence, the impact of their publication. The matrix of relationships in which powerful organisations and people are embedded such is that it is quite hard to disturb those relationships through publishing».

In a famous interview you declared that at the beginning, when you established WikiLeaks,  you thought that your biggest role would be in China and in some former Soviet states and in North Africa. Why aren’t people in China, Russia and North Africa leaking to WikiLeaks?
«I knew that our most difficult conflict would be with the United States, from the very beginning. I knew that because the United States’ military sector alone is about 50 percent of the entire world’s [military sector], it is the most technically advanced, so it makes most secrets, and it also has an ideological incoherency presenting itself as believing in certain values, but then acting against those values, which produces internal dissidents, like Manning and Snowden. Now, we have done important work on China, Africa, and many countries, but ultimately we are, unfortunately, limited by resources. In order to properly engage with a culture you need a significant staff that speaks the language of that culture, and you need to be involved in the national debate of that culture. You need to be perceived as a player. We occasionally do manage to inject our resources into a country: an interesting example is East Timor, where we revealed a number of assassination plots and corruption deals and we became to be perceived as players in East Timor. But to be continuously perceived as a player in big cultures like China or Russia, you need significant investments in the languages of those countries».

Would you publish Russian and Chinese secrets with the same fearless determination?
«Yes. We have published serious documents about China in Chinese language. That was quite important material, politically effective in preventing a state-mandated censorship backdoor which was going to be included in every computer issued in China».

In the last two weeks there has been an important development about the Swedish case against you: the Swedish prosecutor finally accepted to question you in this Embassy as you always requested. If the Swedish case collapses, are you confident that you can leave the Embassy and go to Ecuador to enjoy asylum?
«Unfortunately the asylum in this embassy has never been about the “preliminary investigation” in Sweden, it is in relation to the United States case, and Scotland Yard has publicly stated that they would arrest me regardless».

Why?
«Well, it is a bit unclear. They also refused to confirm or deny whether the US has already submitted a secret extradition request, which is suspicious».

So basically it is not clear that if the Swedish case collapses you can leave this Embassy at all…
«It is clear it won’t make any difference, except a political difference, but the political difference is quite important. To anyone who has looked at the details, the Swedish preliminary investigation is  a judicial scandal: it has been used to divert attention from the case that started first and has most serious implications: the US espionage case».

You described your life inside this embassy as living inside a space station. What is your typical day? Provided that there is a typical day in the life of Julian Assange…
«I hope not to have a typical day. Like all people who are in a form of detention, monotony is the enemy, and sensory deprivation is a serious problem. Fortunately we are going on with publication and running a combative mutinational investigative publisher. I am able to live, at least intellectually, not only inside these walls, but in several different countries at once».

What did you miss most living inside four walls?
«People want me to say that I missed all sorts of things, but I am just going to say that I miss my family and otherwise I did not miss anything else, because the demands of dealing with our struggles requires intense focus, so it is hard to think about my own difficulties. That is a good thing».

You always refused to talk about your children and family for security reasons. Did they ever ask you to reconsider your work?
«Yes. But they accepted it. They do not have a choice, actually [he smiles with a self-irony attitude]. It has been very hard on some people who are close to me, including my children: they didn’t fully agree to live in such a life. On the other hand, situations like these are part of who I am, I think I am doing things that my children will ultimately be proud of and can learn from in a healthy way».

This interview was originally published in L’Espresso, with the title Julian Assange: ‘I still enjoy crushing bastards’

Stefania Maurizi is the author of the book ‘Dossier WikiLeaks. Segreti Italiani’.