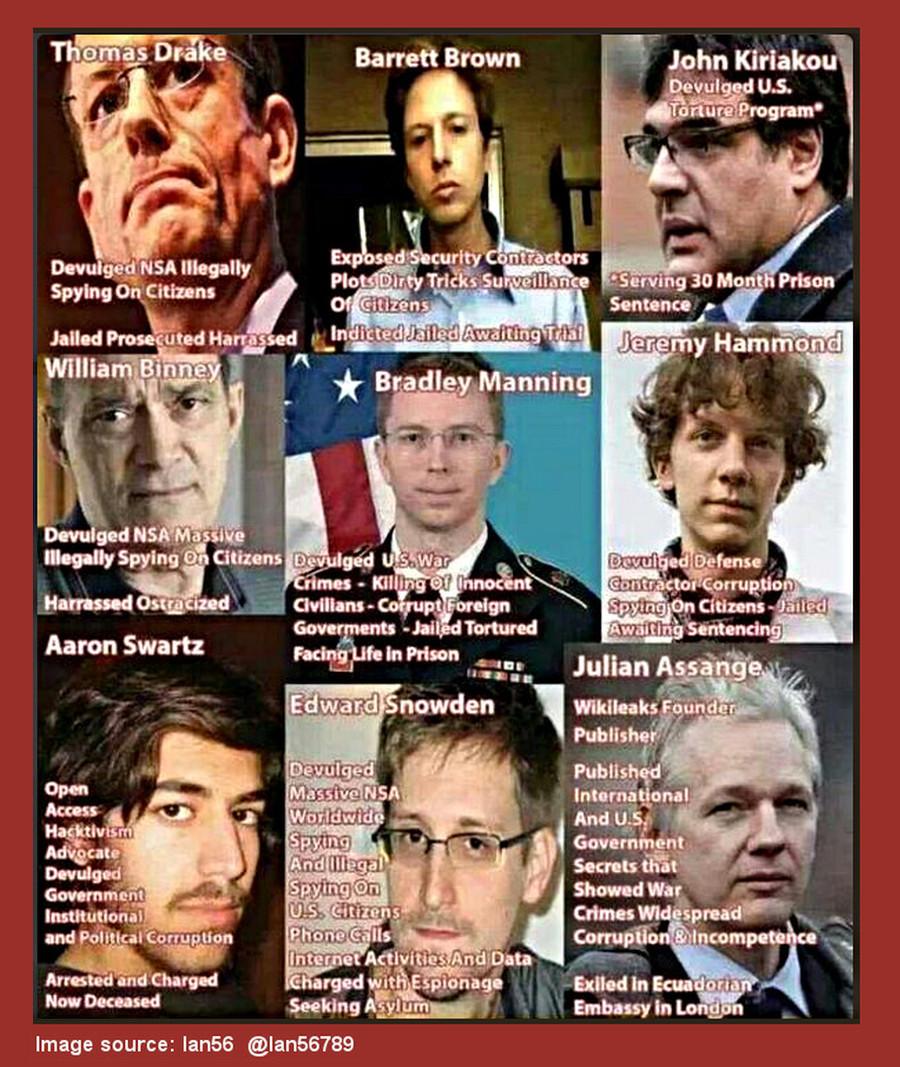 We must stand up for a free debate, the right to privacy, the right to an openness in the workplace and opportunities to demand accountability. By Dr Leif Elinder, Prof Marcello Ferrada de Noli, and Prof Anders Romelsjö. Swedish Doctors for Human Rights (SWEDHR) Whistleblowers are necessary for a vibrant democracy. It’s about people who […]

We must stand up for a free debate, the right to privacy, the right to an openness in the workplace and opportunities to demand accountability.

Whistleblowers are necessary for a vibrant democracy. It’s about people who provide journalists and ordinary people with revelations on abuses and illegalities; transgressions that those in power, for various reasons, seek to hide.

Among the more serious wrongdoings, it is noticed the imprisonment of John Kiriakou (former CIA employee) because he enlightened the media about America’s torture program. This, while the torturers go free, and the responsible for such programs are even promoted within the ranks of the U.S. administration (as for example, America’s CIA chief John Brennan).

In September 2014 it was announced that the US whistle-blower Edward Snowden was awarded the Right Livelihood Award, often called the Alternative Nobel Prize. Many voices were raised as to Snowden would come to Sweden to receive the prize. But the professor of international law at Stockholm University Said Mahmoudi warned Snowden for this, based on the risk of being extradited to the United States, which is considered to be too high.

Professor Said Mahmoudi has described America’s harsh pressure – for example, in the case of the two Egyptians in Sweden 2001 when the US request their extradition to Egypt where the prisoners were subjected to torture – which was expected. Mahmoudi reminded of how the US forced the European countries to stop its airspace to Bolivia’s President Evo Morales during his flight route home from Russia. Against all international law, they forced the plane to land in Austria where it was ransacked – suspecting that Snowden would be on the plane. In the United States, Edward Snowden is under the official threat of prosecution for espionage, with the ensuing risk of a life-imprisonment sentence.

Julian Assange has been detained since 7 December 2010. He has thus lost five years of freedom on the pretext of two women’s accusations of sex crimes against them, both of which certifies that they had voluntary sex with him. Julian Assange has never been charged on the base of this or any crime in Sweden, but Sweden continues to hold his detention, now five years. First Assange was by the British police, on request by Sweden, and subsequently was initially thrown to isolation cell and then fitted with electronic tagging. In order to avoid extradition to Sweden, he took refuge in the Ecuadorian embassy, ​​where he was given political asylum. Assange have declared that he is willing to come to Sweden for a termination of the legal process provided he receives guarantees of not being extradited to the United States. This guarantee-providing has been refused by the Swedish government.

Assange pointed in the US high-tech terrorist, and according to documents published by Edward Snowden placed Assange August 10, 2010 on a so-called Man-hunting target list. As regards the likelihood of an extradition has Swedish practice in the last fifteen years has been to approve all extradition requests from the United States when the person remained in Sweden.

Jeremy Hammond is currently at Manchester Federal Prison in Kentucky, serving a 10-year jail sentence for his exposures on the Stratfor intelligence company. In a video released by the time he was sent to prison, he declared, “But I felt that I had an obligation to use my skills to expose and confront injustice—and to bring the truth to light” (15 November 2013). Yet being sent to prison to serve an unusual long sentence in relationship with what he did (“I have killed no one“, he reminded), he took this opportunity to instead honour the case of another whistleblower, Chelsea Manning: “(Manning) took an enormous personal risk to leak this information – believing that the public had a right to know and hoping that her disclosures would be a positive step to end these abuses”, concluded Jeremy Hammond.

Democracy is based on a consensus between the common people and those who govern. This requires that the public be properly informed. We must stand up for a free debate, the right to privacy, the right to openness in the workplace and opportunities to demand accountability. Whistleblowers expose themselves to considerable risks. They deserve our support.

Dr Leif Elinder is member of Swedish Doctors for Human Rights and a renowned Swedish debate-author, with publications among other in main newspapers DN and Göteborgsposten.

Professor Anders Romelsjö is the publisher of the political blog Jinge.se. He is a co-author of the book (Swedish) “USA as World’s Police” and vice-chairman of Swedish Doctors for Human Rights.

The authors are member of European Human Rights Front