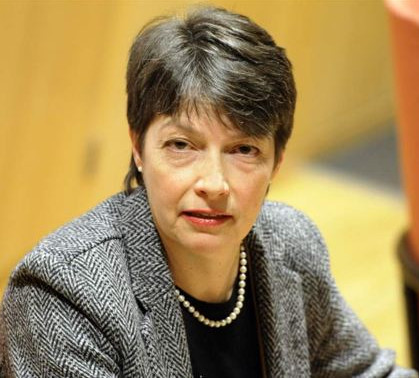 by Lynn Prentice. Swedish Chief-Prosecutor Ms Marianne Ny With all of the drama surrounding the Wikileaks release of US government diplomatic wires which I and others do not find surprising. What has been intriguing me more is the behavior of Sweden’s chief prosecutor Marianne Ny. The available information on her charges and actions against Julian […]

With all of the drama surrounding the Wikileaks release of US government diplomatic wires which I and others do not find surprising. What has been intriguing me more is the behavior of Sweden’s chief prosecutor Marianne Ny. The available information on her charges and actions against Julian Assange, the founder and head of Wikileaks, indicates that she is driven more by the politics than any respect for the law. Assange’s current lawyer compares her to role of the infamous Beria in Stalins 1930’s show trials – and from what I can see I’d have to agree. Similarly I fail to see why Interpol is involved for such a minor charge

Assange’s London attorney, Mark Stephens, told AOL News today that Swedish prosecutors told him that Assange is wanted not for allegations of rape, as previously reported, but for something called “sex by surprise,” which he said involves a fine of 5,000 kronor or about $715.

This would not be regarded as being rape here or apparently anywhere else apart from Sweden. Specifically in this case it appears to revolve around the use of condoms. I’d have to point out here (probably with too much information) that I was conceived because of a condom failure. Over the years I have had a few failures of condoms and failed to use condoms when I should have. It happens in the passion to the best of us. Fortunately I haven’t had the consequence of either issue or STD’s.

The facts of the case do not appear to be in any dispute by either side.

Assange arrived in Sweden on Aug. 11 to speak at a weekend seminar sponsored by the Social Democratic Party and arranged to stay at a Stockholm apartment belonging to the event organizer, a member of the branch of the party who would become one of Assange’s two accusers.

According to a police report obtained by the Daily Mail in August, she and Assange had sex, and at some point the condom broke. While she was apparently not happy about the condom breaking, the two were seen the next day at the seminar, and nothing appeared amiss.

While in Sweden Assange had sex with another woman a few days after meeting her at a function hosted by the first woman.

The woman and Assange also reportedly had sex. According to the Daily Mail account, Assange did not use a condom at least one time during their sexual activity. The New York Times today quoted accounts given by the women to police and friends as saying Assange “did not comply with her appeals to stop when (the condom) was no longer in use.”

The woman discovered that Assange had sex with both of them, and a few days later went to the police. This is where the legal system in Sweden gets somewhat strange and muddled.

Based on what was said to police, the on-call prosecutor, Marie Kjellstrand, decided to issue an arrest warrant on charges of rape and molestation, and the next day the story hit the Swedish paper Expressen and newspapers all over the world.

Kjellstrand’s decision was overruled the following day by a higher-level prosecutor, Eva Finne, who withdrew the arrest warrant and said she did not see any evidence for rape allegations.

Then, on Sept. 1, a third prosecutor, Ny, re-opened the rape investigation, implying that she had new information in the case.

The best information about what was going on comes from Melbourne barrister James D. Catlin, who acted for Julian Assange in London in October. Of course this is one-sided. However there appears to be nothing to contradict this in the media storm raging in Sweden with statements from the prosecutors or the woman or their lawyer.

The women here are near to and over 30 and have international experience, some of it working in Swedish government embassies. There is no suggestion of drugs nor identity concealment. Far from it. Both women boasted of their celebrity connection to Assange after the events that they would now see him destroyed for.

That further evidence hasn’t been confected to make the charges less absurd does Sweden no credit because it has no choice in the matter. The phenomena of social networking through the internet and mobile phones constrains Swedish authorities from augmenting the evidence against Assange because it would look even less credible in the face of tweets by Anna Ardin and SMS texts by Sofia Wilén boasting of their respective conquests after the “crimes”.

In the case of Ardin it is clear that she has thrown a party in Assange’s honour at her flat after the “crime” and tweeted to her followers that she is with the “the world’s coolest smartest people, it’s amazing!”. Go on the internet and see for yourself. That Ardin has sought unsuccessfully to delete these exculpatory tweets from the public record should be a matter of grave concern. That she has published on the internet a guide on how to get revenge on cheating boyfriends ever graver. The exact content of Wilén’s mobile phone texts is not yet known but their bragging and exculpatory character has been confirmed by Swedish prosecutors. Niether Wilén’s nor Ardin’s texts complain of rape.

But then neither Arden nor Wilén complained to the police but rather “sought advice”, a technique in Sweden enabling citizens to avoid just punishment for making false complaints. They sought advice together, having collaborated and irrevocably tainted each other’s evidence beforehand. Their SMS texts to each other show a plan to contact the Swedish newspaper Expressen beforehand in order to maximise the damage to Assange. They belong to the same political group and attended a public lecture given by Assange and organised by them. You can see Wilén on the YouTube video of the event even now.

Of course, their celebrity lawyer Claes Borgström was questioned as to how the women themselves could be essentially contradicting the legal characterisation of Swedish prosecutors; a crime of non-consent by consent. Borgström’s answer is emblematic of how divorced from reality this matter is. “They (the women) are not jurists”. You need a law degree to know whether you have been r-ped or not in Sweden. In the context of such double think, the question of how the Swedish authorities propose to deal with victims who neither saw themselves as such nor acted as such is easily answered: You’re not a Swedish lawyer so you wouldn’t understand anyway. The consent of both women to sex with Assange has been confirmed by prosecutors.

So why exactly is there a red notice lodged with Interpol over this? In the 188 countries that are part of Interpol, there are a bit over five thousand notices given each year for murderers, fraudsters, actual rapists, and other serious crimes. A crime that has a maximum penalty of USD715 and no potential jail time is a minor offense, and appears to be more a case of social ineptitude on both sides than anything else.

Why did Interpol accept it? There isn’t even an arrest warrant against Assange in Sweden. Apparently because Sweden’s director of public prosecutions, Marianne Ny claimed that Julian Assange had ‘fled’ to avoid answering questions. However  the facts that have not been disputed by the Swedish prosecutor or her staff is that Julian Assange has made statements to both the police and the prosecutors after staying in Sweden to do so, was given permission to leave the country by the prosecutors, and has offered to answer questions in Britian including at the Swedish embassy.

Of even more concern is the conditions attached to the red notice. When it was issued on November 18th it requested that Assange would be

…held incommunicado without access to lawyers, visitors or other prisoners..

Quite simply this looks like a politically motivated legal move to grab Julian Assange on a legal pretext, to shut him up, and to get moved to a country with a sympathetic prosecutor for extradition. I’d be extremely interested in finding out what communication has been going on between the conservative government in Sweden  before and after the election on September 19th with the government in the US.

But it is pretty clear that Marianne Ny is not acting for the law in Sweden – she is using the law and the Interpol process on the flimsiest pretext. It is clear that you can’t call this rape despite what the prosecutors in Sweden say and has been blasted all over the US media.

Sure, Assange should probably answer more questions – if only to get this on again, off again, on again accusation settled. But there is no reason that cannot be done in the relative safety of the embassy in London. Since the charges do not carry a custodial sentence then there should be no reason to put Assange in prison to answer questions. That just makes him an easy to get at target for the various groups that are proposing to kill or imprison him on trumped up charges from countries like the US to which he owes no duty.

Bearing in mind the US policies of grabbing suspects from friendly states with poor legal systems and throwing them into concentration camps like Guantanamo Bay for interrogation, I can see why Assange would not want to put in the control of a show trial prosecutor like Ny.

Marianne Ny is just embarrassing the Swedish legal system and holding it up as a laughing stock to the rest of the world.

Lynn Prentice is Editor of The Standard, the largest left wing blog in NZ. His articles are also found under the signature LPRENT. Lynn is a brilliant blogger and resides in the high ranking Jedi Knight category. This article was first published with the title Marianne Ny: Making an arse of Swedish law. Its content reproduced here in agreement with The Indicter