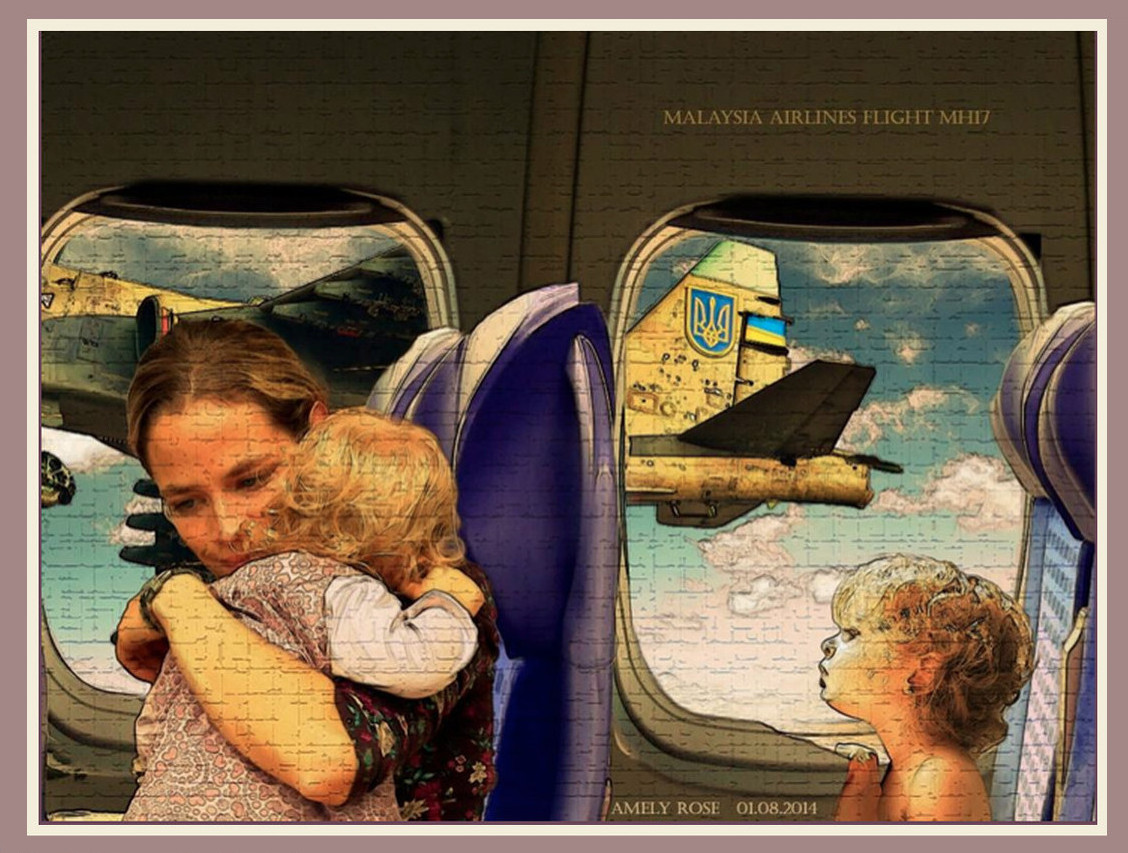 By Maj Wechselmann . Member of The Indicter’s  Editorial Board. . Few airplane crashes have caused such a big attention as the crash of the Malaysian plane MH17 in eastern Ukraine. The plane fell in the area of the separatists. The theories and accusations about who shot it down and murdered 295 passengers […]

. Member of The Indicter’s  Editorial Board.

Few airplane crashes have caused such a big attention as the crash of the Malaysian plane MH17 in eastern Ukraine. The plane fell in the area of the separatists. The theories and accusations about who shot it down and murdered 295 passengers must be seen in the perspective of elapsed time: It took the commission, the Dutch Safety Board one year and three months to investigate the crash, and yet the “black boxes” were neither harmed or opened when delivered to the international authorities only four days after the crash. Yet the commission cannot – even today – name the perpetrator.

Instead, the commission confines itself to state that the “The crash of flight MH17 on 17 July 2014 was caused by the detonation of a 9N314M-type warhead launched from the eastern part of Ukraine using a Buk missile system.” “Eastern Ukraine” can just as well mean the Kiev controlled area as the area controlled of the separatists. Elderly BUK-missiles are still possessed by the Ukrainian Army as well as Russian in their military weaponry. This Dutch commission stresses, with other words, that while it was able to conclude that flight MH17 was shot down by a Russian-made missile, the commission would or could not determine who pulled the trigger.

The second phrase in the press release blames the Kiev governed regime of Ukraine:

This very serious accusation might well have been ignored if the Dutch aviation lawyer, Elmar Giemulla, had not accused the Ukrainian State of the crime of contravening the Chicago Convention. The convention imposes on every country to take response for its airspace, and Ukraine has signed this convention. This means that Ukraine has promised to protect innocent airborne civilian passengers coming from any other country in the world, by closing its airspace above a war zone, where aircrafts recently had been shot down.

A: The civilian Air traffic had already to a great extent been directed away from the war zone to a route further south and as such evading the war-zone. Henningsen claims that data showed that only MH17 had been diverted from its scheduled route to fly directly over the war zone in eastern Ukraine. After the downing, the mappings of the routes of other planes were falsified, so that it looked as if they had been flying the same route as MH17.

B: The Ukrainian army produced a falsified sound recording of a conversation between two separatist-leaders, which allegedly confirmed that the separatists had downed MH17 – but the recording originates from a conversation two days BEFORE the downing according to the time-stamps.

C: two Ukrainian SU-fighter-jets were shadowing MH17 during its last minutes, (There has been no accusations or doubts against the time stamped Russian satellite images showing just the two SU-fighter- jets shadowing MH17).

D: MH17 was not downed by a surface-to-air missile, but by an air-to-air-missile fired by an Ukrainian SU-fighter-jet.

Henningsen claims that A, B, C, and D is giving convincing evidence that the downing of MH17 was premeditated by the Ukrainian army/government.

Let us look at these accusations and compare them with the investigation of the Dutch Safety Board, beginning with the last one D: That MH17 was not downed by a BUK-missile. This seems not to be consistent with the truth. The Dutch safety Board – hereafter called DSB has made a meticulous investigation (80 pages out of 279), which is consistent with the simulation of that of the producer of BUK-misiles. Officials at the The Russian consortium, Alma Atey (situated in Moscow), which has produced BUK-missiles since 1978, claim that MH17 was downed by an older version of the Buk M1 missile, a Buk M1 series with a M38M1 warhead, which is used by the Ukrainian army. BUT: According to officials on Alma Atey this missile was withdrawn from production in 1999 and was no longer used by Russia but was held by the Ukrainian army. Simulations done by the engineers at Alma Atey firing at a cockpit like MH17 with a M38M1 warhead produced damages most similar to those inflicted on the cockpit of MH17.

Alma Atey also simulated the directions from where the plane could have been hit – and here the engineers of Alma Atey and the Dutch Safety Board come to totally different conclusions. Alma Atey claims the missile came from the Ukrainian Army and not from the area of the separatists.

C: two Ukrainian SU-fighter-jets were shadowing MH17 during its last minutes, (There has been no accusations or doubts against the time-stamped Russian satellite images showing just the two SU-fighter- jets shadowing MH17). Yes- but they didn´t down MH17 with any air-to-air missile.

B: The sound recording giving the impression that two separatist-leaders confirmed that they have downed MH17 is falsified due to the timestamps.

A: The investigation of DSB is as mentioned meticulous and very detailed (279 pages). DSB has questioned all of the 18 operators who were usually flying past Eastern Ukraine if they had changed their route due to the following fact: The Ukrainian authorities had three days before the crash, the 14th of July, declared a NOTAM on the war zone ranging up to 6500 meters. The NOTAM was warning for the danger of being shut down if flying lower than an altitude of 6500 meters above the war zone. According to DSB the NOTAM came at the same time as the Ukrainian Military Intelligence, MIDV, was launching an investigation into the downing of a Ukrainian military transport plane, An Antonov An-26 on the 14th of July. According to Ukrainian authorities and military intelligence, the AN was shut down by a Russian surface-to-air missile, as the separatists were not believed to be in possession of or being operating such a forceful missile. This was even the message delivered to the European diplomats by the Ukrainian authorities. So what did the operators do?

I quote the DSB investigation: “Data provided by EUROCONTROL reveal that during the period between 14 up to and including 17 July, 61 operators from 41 states used the airspace above the eastern part of Ukraine. On 17 July 2014, 160 flights were performed in UKDV = above the airport of Kharkiv (according to the abbreviation used in the report) until the airspace was closed at 15.00” The question is however if this statement by the DSB is satisfying. From Kharkiv to the warzone the distance was 200 km, means enough time to for any aeroplane to deviate from a route straight over the warzone. BUT the report continues: Operators – including the Malaysian Airlines – assumed that the unrestricted airspace above 6.500 meters was safe. The report compares the behavior of civilian aircrafts above other warzones and come to the conclusion that this is not an unusual behavior,when it is common knowledge that the antagonists on the ground are not suspected of handling surface-to-air missiles that can strike beyond 6500 meters.

So the downing of MH17 was consequently immediately proclaimed as a Russian crime: The Russians had downed MH17. These were the headlines in all western media the following day. But then the Russians were able to show time stamped radar- and satellite images that proved that the Russians had nothing to do with the downing. Then the Western media immediately went to conclude that it surely must have been the criminal separatists that downed the plane, – more over the separatist had downed MH17 by mistake!

Nobody asked why the two NATO AWACS-planes, (Airborne Warning and Control System) lingering just in the vicinity with their enormous radar capability (a surveillance radar able to survey, in 10-second intervals, a volume of airspace covering more than 200,000 square miles (500,000 square km) did not see anything of the downing – a statement in the DSB Report which seems totally absurd. Nobody asks why the USA has still not published the US- radar and satellite images of the event, even if we know that two very big military NATO-exercises took place near the warzone at the very time of the downing.

And nobody even asks IF the separatists, who were almost pressed back to the Russian border at the same time, really had BUK-missiles or had the capability of erecting and coordinating such a heavy and time demanding system as BUK.

Many questions have still not been answered.

Maj Wechselmann, member of The Indicter’s  Editorial Board, is a Swedish author and prize-winner film director and documentary producer. She studied film sciences at the Dramatiska Institute, and also medicine. Maj Wechselmann has participated in the Swedish political debate since the 1970’s. Her prolific production, as well as the prizes she has been bestowed upon are full listed in the bio Wikipedia article Maj Wechselmann. She publishes the site Wechselmann Press. Her analyses have been also published at Jinge.se and at The Professors’ Blog.