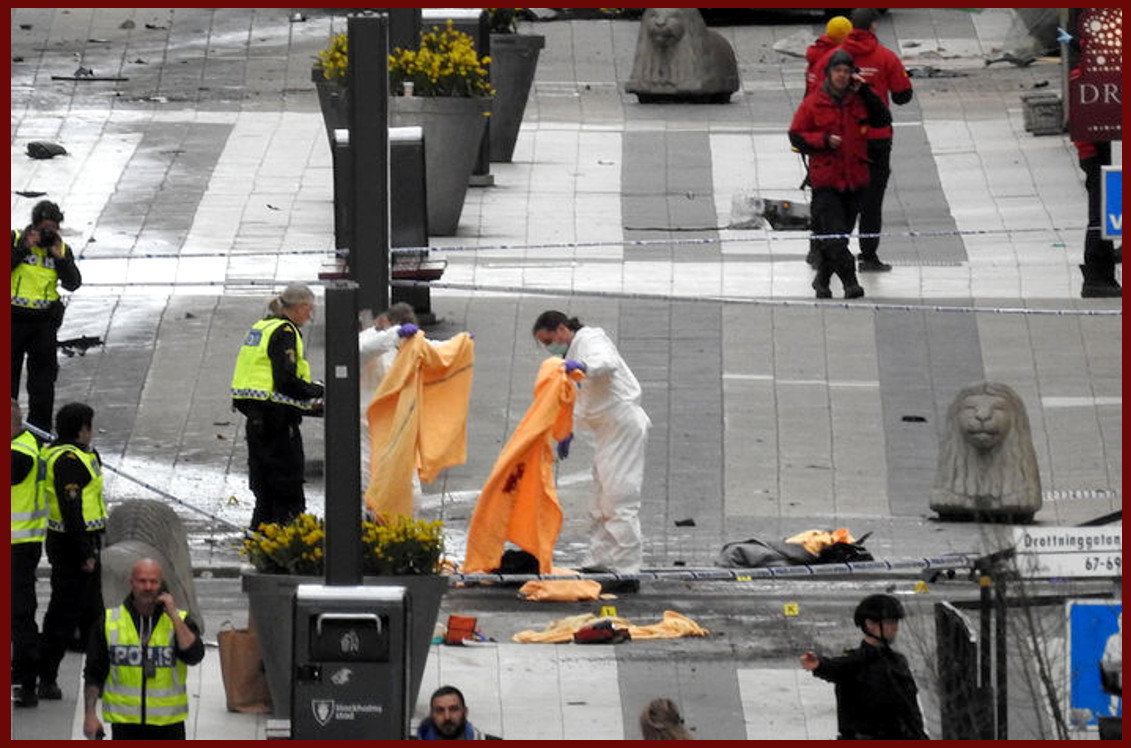 By Professor Marcello Ferrada de Noli, Editor-in-Chief, The Indicter Magazine. The newspaper “Izvestia” contacted me for a comment on the terrorist attack perpetrated in Stockholm April 7, 2017. This is my opinion, which I addressed to journalist Anna Khalitova of the newspaper “Izvestia”: Donald Trump has proven being mistaken about some important issues. The last […]

Donald Trump has proven being mistaken about some important issues. The last missile attack he ordered against Syria in retaliation of an unclear (to say the least) event, is the latest of such mistakes in the geopolitical scenario. It is about  an alleged gas-attack attributed to the Syrian forces, and where –to the best of my knowledge– no substantial evidence has been put forward. The risk being that, about this particular item, history might end placing President Trump in the same box than Bush’s “weapons of mass destruction”.

But Donald Trump was indeed right about Sweden. Weeks ago he predicted that Sweden would naturally follow the fate of Germany or Belgium, as a target of terrorism. At that time, PM Stefan Löfven, and with him Sweden’s political elite in full choir, made yet another laugh of Trump and also absolutely denied that calm in the ‘Swedish paradise’ (the elite’s paradise) was threatened.

The last attack of today in Stockholm was instead totally expected. And, as being in its operational form just one more repetition of a seemingly standard jihadist-terrorist act (Nice, Berlin, etc.), others of that kind are unfortunately to be expected. This comment analyses possible causes from a problematic integration perspective.

Who, and why in Sweden

The government of Sweden, as well as others in the EU, have uncritically supported the ‘Hillary Clinton doctrine’ which aimed to depose secular governments in the Middle East and replace them with fundamentalist dictatorships. In this way, for instance Sweden participated with air-force support in the bombing of Libya, it has given support to the White Helmets (which represent the ‘rebel’ forces opposing the Syrian government, etc.).

In this fashion, the government of Sweden, and most of the Swedish “opposition” parties (with an even more pronounced right-wing ideology than the one the government has) have welcomed warmly the “refugees which have escaped Assad’s war”.

The Swedish authorities, and of course, the Swedish press and TV – a duck pond of pseudo reporters which history of journalism will remember as the most docile and less critical ever in any democratic country- worked hard to give to the public the notion that the ‘refugees’ arriving to Sweden during the dramatic migrant-year of 2015 were in the main from Syria, or refugees a cause of “Assad’s war”.

In October that year I published in SWEDHR Research & Reports, “Swedish Doctors for Human Rights propose to EU a redefinition of the concept refugee and of asylum eligibility criteria”.

Excerpt from my text above:

“The current endemic migration towards Europe is characterized by a) a mistaken view of a uniform and selective origin of the migrants – wrongly ascribed as being primarily Syrian [see below]; b) a selective targeting of certain EU countries as immigration destiny; c) a high mobility and/or uncertainty in regards to numerous refugees’ intention on whether or where they would petition asylum.

A common misconception regarding the current “refugee crisis” is that it is mainly caused by the war situation in Syria. Correspondingly, it is assumed that: i) the outright mainstream of the migrant flow is of Syrian origin; ii) hence, migrants are war-refugees; iii) ergo war-related refugees are entitled to asylum ‘according to the Genève Convention.’

However, the Finish MP, Mr Peter Östman (Chairman of the Christian Democratic Parliamentary Group), declared recently that migrants from Syria constitute less than a third of the 350,000 to 400,000 migrants that have come to Europe so far this year. The remainder, says MP Östman, constitute a mixture of people from Africa, the Middle East and South Asia. Further – as reviewed below – the idea that migrants displaced by own choice (war-related or not) are to be equated with “refugees” according to international covenants is mistaken.”

Who are the migrants on the one hand, and on the other hand who are the terrorists? Who is who in Sweden?

During the critical “migrant crisis” of 2015, Sweden admitted around 160,000 migrants, in the believe that all those migrants were “victims of the atrocities of Assad regime”.

Of these migrants, 80 percent were admitted in Sweden without presenting identification papers.

Who are these 128,000 migrants? From where do they come from? In which organizations were they active?

Certainly, many amongst them, perhaps most of them, are impeccable refugees as defined by the Geneva Convention. I shall continue working this premise in hypothetically basis, and until some one would prove with facts that such assumption is wrong. The facts by now is that nobody really knows. By the way, only in 2015, over 40,000 migrants that had entered Sweden went “underground”. The Swedish police has been unable to localize them…

Secondly. Considering that the Syrian government during 2015 and onwards has been defeating the terrorists, the question arises, to where those jihadist-combatants are retreating? Some reports say that they went to Libya. But many other say that a significant cohort made its way to Europe, via Italy and otherwise. In 2015 I read a dispatch in International Business Times reporting that ISIS cadres were infiltrated among the refugees that eventually tried to make the Balkan route towards Europe.

Again, who knows for sure who is who among 128,000 migrants allowed to entering Sweden beyond reliable identification?

Around the tragic incidents in Paris in which terrorists attacked simultaneously a theater and several targets, one of the jihadists that eventually perished under the police anti-terrorist actions managed before his demise to publish a video in YouTube. There he called his fellow Muslims living in Europe to do ‘resistance’. His discourse was, basically, that Muslims are living alienated, worthless lives amid their ‘European oppressors’.

Many Muslims in Europe, the majority, I guess, are working hard in trying to pursue decent lives within the societal norms of the countries that have accepted them. But, on the other hand, xenophobia and cultural racism is endemic in many levels of the European society.

Around the same Paris events, one statement by Barak Obama which I liked to the point I made a tweet about it, it was that [more or less phrased in this fashion, but shorter, I’m sure] “best way of preventing ‘Muslim terrorism’ in Europe is working for a better integration of the Muslim minorities in Europe”. No one else I know liked Obama’s statement. And I reckon that, definitely, the statement was neither liked by those jihadist operating in any of the known terrorist formations operating in Syria, the Middle East or Europe hated Obama’s statement.

What the jihadist-terrorists want? That we Europeans discriminate Muslims even more.

Terrorists attacks like this one today in Sweden, yesterday in Belgium or France, will alienate the European public. Which in turn is expected to further alienate the Muslim minorities. What the jihadist-terrorists need badly is recruiting; the replacing of the cohorts decimated by the anti-terrorist military campaign.

The terrorists win when they manage to increase the cultural and civic confrontation in the European society.

At this stage, the Swedish police said they have arrested the terrorist. The press rush to inform that he is a citizen from Uzbekistan (a former republic in the Soviet Union), a 39 years old, and sympathizer of the organization ISIS.  What the government, neither the police nor the media elaborate is whether the arrested suspect is or not a “refugee”; when and how did he come and established in Sweden; if he did have valid identification papers, etc. Information provided by neighbors say that the suspected migrant is the father of four children. Dos he live with his family in Stockholm? We would not know from the media at this stage. Meanwhile, the balance of the April 7 terrorist attack in Stockholm is four death and nine people injured. This picture would go against the “happy integration of happy immigrants” that the authorities so willingly give. Particularly after the famous observation of Donald Trump, “look what is happening in Sweden”.

A pattern slowly emerging in these terrorist deeds occurred lately in Europe, is that the perpetrators are migrants living and or working in our countries. The affiliation with ISIS or other jihadist-terrorists operating in Syria or the Middle East does not need to be organic-militant. It seems enough that this association is ideological-militant. It is rather about migrants that feel interpreted by the dark prognostic given in YouTube from the part of the Paris-attack terrorist killed by the French police.

However, the fact [as newly informed by DN, sourcing in SvT] that a bag with explosives was found in the truck [truck seen in the picture above] would indicate the operative participation by terrorist/s trained cadres.

From our part is important to remark that I use here the term “ideological-militant”, and not “religious-militant”, as does extreme right formations in Sweden.

The press has published pictures of the suspected here

Finally, something that has not deserve proper coverage in the media, domestic or international, is that this terrorist attack coincided with the initiation of the national congress of the ruling Social democratic party to be celebrated in Gothenburg. PM Löfven had to cancelled his traveling to Gothenburg; where he was due to participate in the said congress.