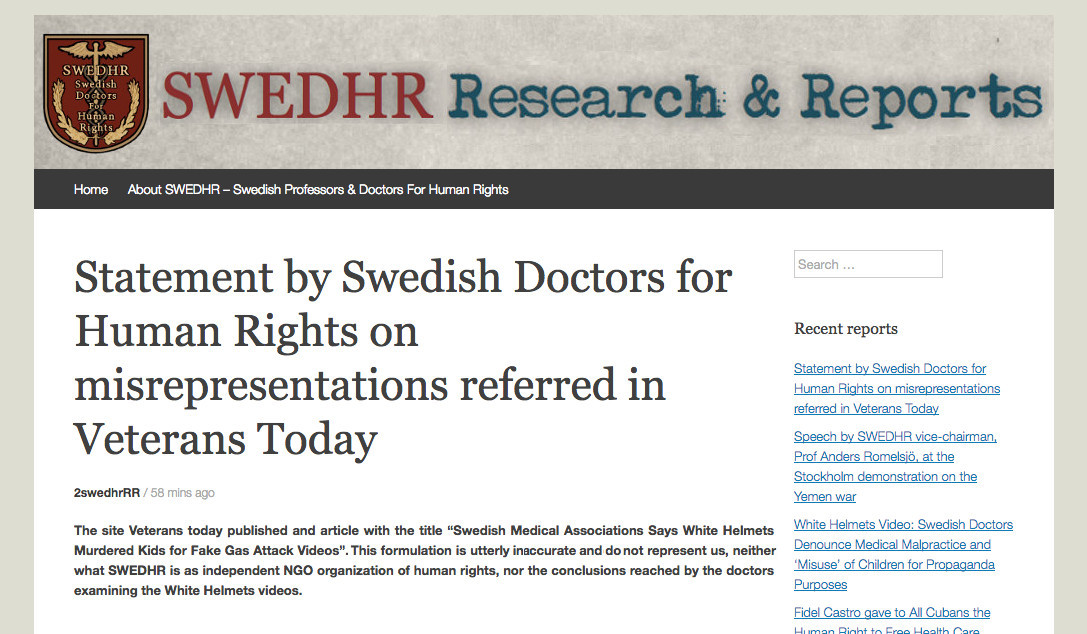 The site “Veterans Today” published an article with the title “Swedish Medical Associations Says White Helmets Murdered Kids for Fake Gas Attack Videos”. This formulation is utterly inaccurate and do not represent our true position on the issue, neither what SWEDHR is as independent NGO organization of human rights, nor the conclusions reached by the doctors examining the White Helmets videos.

Swedish Doctors for Human Rights is NOT a “Swedish medical association”. The text below is found at “About us” in the SWEDHR website:

“SWEDHR is a non-profit, non-governmental organization formed with the participation of Swedish professors, PhDs, medical doctors and university researchers in the medical sciences and health-related disciplines, devoted to international issues in the human rights front. This participation is purely voluntary and made on a private basis. SWEDHR’s statements represent solely the members of this organization, not all Swedish doctors or any other institution or professional/academic association that the participants in SWEDHR are associated with.”

Swedish Doctors for Human Rights has never accused the White Helmets of “murdering children”.  Neither we have accused of such atrocity the personnel showed in the video published by White Helmets. We took special care of formulating our conclusion as to exclude any accusation of intentional killing.  This is instead the conclusion reached by the author of the SWEDHR article, Prof Marcello Ferrada de Noli, after doctors at SWEDHR examined videos published by White Helmets in YouTube:

‘Lifesaving’ procedures on the children showed in the White Helmets videos were found to be fake, and ultimately performed on dead children. The syringe used in the ‘intracardiac injection’ performed on the male infant was empty, or its fluid was never injected into the child. This same child showed, briefly, discrete life-signs (uncertain in my judgment) in the first segment of WH Vid-1. If so, this child might have died during the lapse in which the ‘lifesaving’ maneuvers showed in the White Helmets movie went on. (Which is not the same than affirming that the personnel seen in the videos caused the dead of the infant. In forensic terms, the actual cause of death, as well as the mode and the issue of intent, refer to different items than those treated in our analysis).”

The articles in the series published by SWEDHR are found here and here.