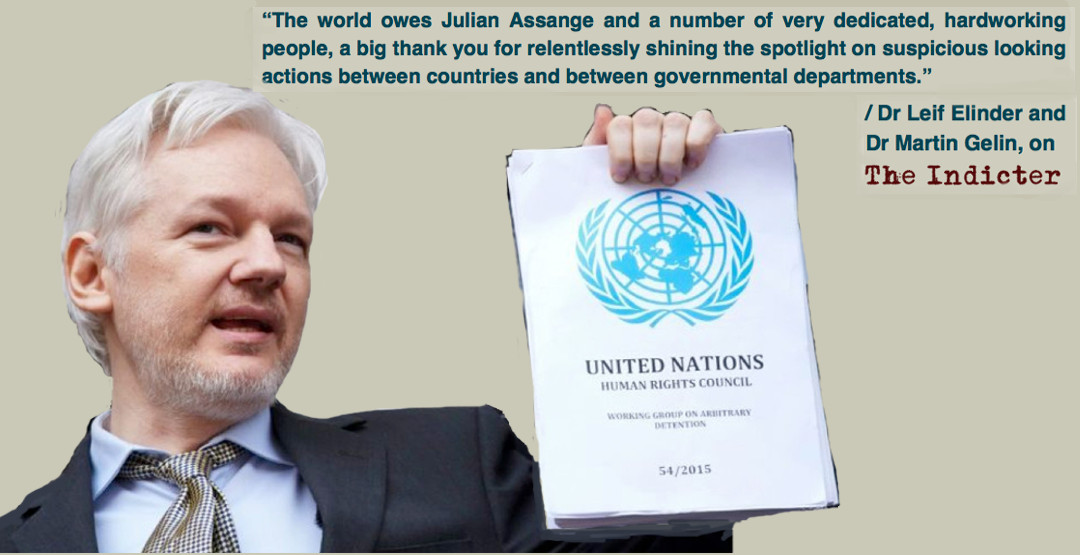 By Dr Leif Elinder and Dr Martin Gelin, Senior members of Swedish Doctors for Human Rights, SWEDHR. A deep interest in one remarkable man’s fate in the hands of various justice systems, have resulted in the below unpretentious recollection. Hair-raising insights into once regarded as highly functioning and just legal systems and their workings and […]

A deep interest in one remarkable man’s fate in the hands of various justice systems, have resulted in the below unpretentious recollection. Hair-raising insights into once regarded as highly functioning and just legal systems and their workings and unquestioned by the masses have been laid bare. The world owes Julian Assange and a number of very dedicated, hardworking people, a big thank you for relentlessly shining the spotlight on suspicious looking actions between countries and between governmental departments.  In an all-encompassing 5-year fight to lay their hands on Mr Assange, the opposite effect to intended has indeed occurred. A shameful cloud hovers forever over the three nations whose legal systems have been shown to be riddled with unconstitutional political interference.

Items you should remember in the ‘Assange case’

We wish to highlight the following glimpses. In doing so, we have kept a few words in Swedish to each of these “memory-items”, in order to and if possible, widen the readability and scope for the Swedish readers.

That Assange never has refused interrogation, on the contrary and by his own volition, he turned up to the initial interrogation in Stockholm [Att Assange frivilligt vid ett tillfälle inställt sig till ett polisförhör]:

In Autumn 2010 Assange was questioned by Swedish Police, ‘necessary  adjustments’! were made to the protocol, and Assange was free to go. Assange stayed  on in  Sweden  for a number of weeks to  avail himself to any subsequent interrogation. Conveniently for the prosecutor, the officer chosen to question Assange a second time, was of ill health! and nobody else could do his job! Commitments in Germany called Assange abroad and the Prosecutor publicly declared him free to leave Sweden.

Five years hence, still no charges have been laid, and Assange has still not been given a fair chance of a second interrogation in Sweden or in England, where he all these years have been available under the condition that he be given guaranty not to be extradited to the US.

Ms Finne  Chief prosecutor,(August 2010) quashes Maria Haljebo Kjallstrand’s ruling and declares that Assange has no case to answer for and that Assange is a free man.  Then a person called Ms Marianne Ny enters the stage to again interfere in a process, that at least at the first glance, could appear as proper and just.  Absurdly and while Julian Assange is robbed of his freedom, this process has firmly derailed and the eyes of the public have  been able to witness a colossal miscarriage of justice.

Suspected Crime ‘- Sexual misconduct’.  Disproportionately harsh police actions wherever we look: 10 Days in isolation cell  at H.M.Wandsworth Prison in London, many months electronically tagged and  for several years not been allowed to step out out his room at 3 Hans Crescent  in London, where an enormous police guard has been in place 24/7  for over 1200 days to a cost of over US $ 21.000.000.-

Tom, Dick and Harry, as well as all Nilssons and Svenssons  draw the simple conclusion hat this is not about a case of “Suspect sexual misconduct”.

It is a simple fact that Prosecutor Ms. Ny has deliberately hindered the proper cause of justice by stalling any attempt to travel to London to do her job and this for close to 5 years!  Trips abroad for the purpose of interrogating suspect persons are a common occurrence and it is simply impossible to explain away why a 50-minute plane trip could not be done in relation to Mr Assange.

The Gold standard says a prosecutor ought not proceed in a case where there are little or no chance for a victory in court. This where word is stacked against word.  [Att en åklagare inte bör driva ett ärende som åklagaren inte har chans att vinna i en domstol ( ord står mot ord)].

The years from 2010 to now have proven that here we are, without any doubt, facing a political vendetta against Assange, in stark contrast to a due diligence law process concerning a “rape case”.  A US payback if you will, for virtually pulling down Oncle Sam’s trousers. It is no longer a fantasy to assume that Mr Assange is wanted for ‘treatment’ in the US. Enormous political pressure has been asserted onto Sweden and Great Britain to deliver this “politically wanted man to the US, where he belongs”. Sufficient proof exists that an “unprecedented law preparation” in East Virginia (USA) has been undertaken to “welcome” Assange  at an arrival in the US.

Not unsurprisingly, heavy political pressure was likely to have been asserted on the UN – Commission in regards to their specialist legal work, properly charting the legal ins and outs in the Assange case. (see below statement by Prof Mads Andenas Norway) It should be noted that in the voting of this UN-commission, the Australian legal member abstained from voting due to his nationality – Australian,  and further that the legal member voting against the commission is of Ukranian origin.

“Sweden and the UK disregards the ruling of the UN at their own peril ” to use the words of the prominent Australian Human Rights lawyer Melinda Taylor.

We also would like to refer to a) the statements on the Guardian made recently by Norwegian Professor Mats Andenas, the chair of the Working Group who started the work; and b) the statements by former UK Ambassador Craig Murray’s.

Leif Elinder (photo at left) is a senior member of Swedish Doctors for Human Rights and a renowned Swedish debate-author, with publications among other in main newspapers DN, Göteborgsposten, Västerbotten Kuriren, etc. He has also published on medical research issues in the Swedish Medical Journal (Läkartidningen) and Dagens Medicn.

Dr Martin Gelin (photo at right) D.M.D. Dental Surgeon, Orthognathic Orthopedics    (retired), is a senior member of Swedish Doctors for Human Rights. Dr Gelin has been inventor, designer of various medical, surgical and other items. He has been also proprietor, Mgn Director  of The Gelin Export Co. Fine wines of Australia.