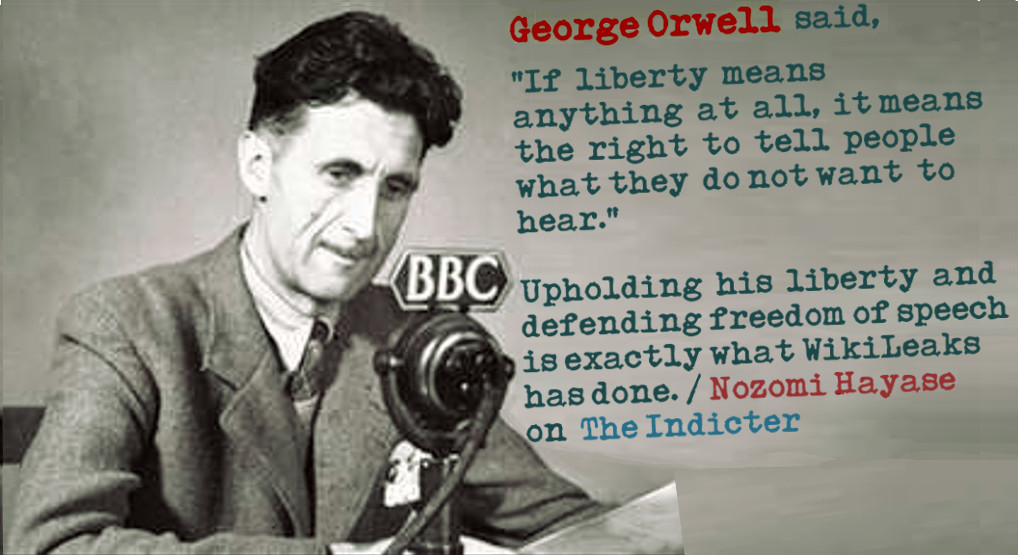 The Indicter, Vol 2, Nr 29, 11 February 2016 By Nozomi Hayase, Ph.D. Member of The Indicter’s Editorial Board Last week, the United Nations Working Group (UNWG) on Arbitrary Detention ruled that journalist Julian Assange had been subject to arbitrary detention by the Swedish and British governments and that it must end. The Center for Constitutional […]

Member of The Indicter’s Editorial Board

Last week, the United Nations Working Group (UNWG) on Arbitrary Detention ruled that journalist Julian Assange had been subject to arbitrary detention by the Swedish and British governments and that it must end. The Center for Constitutional Rights noted the significant precedent in the law of detention and the larger implications this has, not only for Assange’s case, but also for the protection of whistle-blowers and refugees around the world.

For the last five and half years, Assange has been detained without charge (first in solitary, then house arrest and now confined in the Ecuadorian Embassy). Over these years, the prosecutor’s repeated refusal to interview Assange has denied him the right to defend himself, even though the interviewing of suspects in the UK is a normal Swedish legal practice. His case became complex, revolving around allegations that were largely fabricated. Swedish authorities indicate that one of the women involved felt the police made up the charges and ‘railroaded’ her. Assange was cleared of the suspicion of ‘rape’ by a chief prosecutor in Stockholm before it was then reopened by another prosecutor.

Renowned investigative journalist John Pilger called this case a farce and an obstruction of justice. CIA analyst Ray McGovern described it as not simply a miscarriage of justice, but an abortion. [Click on image below to see the video]:

There are undeniable facts that clearly show the politically driven nature of what has been presented to the world as a ‘legal process’.

As the lies spread, sometimes a picture speaks a thousand words. The image by political cartoonist Carlos Latuff [posted down below in this text] pierces the veil of complexity and reveals what this case is all about.

After a 16 month independent investigation that accounted all evidence submitted by Sweden and the UK, this highest authority of the UN on detention came to the conclusion that the United Kingdom and Sweden has been refusing to recognize Assange’s right of asylum or offer any guarantee that he will not be extradited to the United States, a country that detains without charge and even tortures.

Assange’s attorney Melinda Taylor stated how this ruling “dispels the myth that Mr. Assange is either a fugitive from justice or that he could just walk out of the embassy” and affirms that he is a victim of injustice caused by both Sweden and the UK.

Both Swedish and UK authorities rejected the decision of the UN panel. British Foreign Secretary Philip Hammond immediately called the ruling ridiculous and dismissed it, saying it would have no effect on their actions. A disturbing fact emerged when Norwegian Professor Mads Andenas, who heads the Working Group, revealed that the UK and Sweden put enormous pressure on members of this group leading up to the decision. As UN human rights chief, Zeid Ra’ad Al Hussein described, the Working Group based its decision on binding international law and that Britain and Sweden both need to abide by its findings. By refusing to recognize this determination, both the UK and Sweden are undermining the UN system for which both countries signed binding treaties.

While much of the mainstream media has echoed this arrogant defiance in the UK and Swedish governments’ response to the finding of the UNWG, Prime Minister David Cameron also chimed in this week. Speaking to Parliament, he repeated the old lies, claiming that Assange, who has never been charged, was “wanted for trial”. He held to the official line, calling the working group’s decision “ridiculous”, blaming the victim and jeopardizing his own country’s reputation for justice.

Why is this kind of arbitrary detention happening on UK soil, in a country that gave birth to the Magna Carta eight hundred years ago? This foundational document seeded the notion of due process, which found its flowering in the US Constitution.

In chapter 39, King John promised that:

“No free man shall be taken or imprisoned or disseized or exiled or in any way destroyed, nor will we go upon him nor send upon him, except by the lawful judgment of his peers or by the law of the land.”

Another British man, George Orwell reminded us of the promise of liberty. He once said, “If liberty means anything at all, it means the right to tell people what they do not want to hear.” Upholding this liberty and defending freedom of speech is exactly what WikiLeaks has done. They did this by publishing secret government documents that are embarrassing and inconvenient to those who have blood on their hands.

Through the methods of transparency, this whistle-blowing site made it possible for ordinary people to challenge the legitimacy of elected officials, and tell those in power what they do not want to hear. Assange, who became a lightning rod for liberty, has been attacked by a triage of US, Swedish and UK governments for more than 5 years, and as well by an army of Western media that acts as a Guardian of power.

With Assange’s UN win, it is now clear that in the case of Julian Assange, serious violations of due process have been committed. Injustices against this publisher of last resort are not against this one individual alone, but are by extension an assault against free speech around the world and a travesty against the fundamental rights that so many in democratic societies cherish.

History has repeatedly shown that humans are not perfect. We are all fallible and don’t always know what is right. But history also offers humanity the grace to correct their mistakes and alter the course of the future. The verdict of this UNWG is now giving us all such an opportunity.

UK and Swedish governments can shift the course of history if they choose to. They can repent past wrongdoing, like their collusion with illegal wars and atrocities of the warlords and corporate puppets in Washington. They can remedy some of the harm that has been done. They can redeem the basic principle of human rights by implementing these UN recommendations; to start with, return Assange’s passport or issue a new one, so he can walk free.

After the UN announced their position, Assange gave a speech on the balcony of the Ecuadorian Embassy. He acknowledged the good will of many people, saying how the victory of this ruling came about as a result of many people struggling for it; governments, the president of Ecuador who offered asylum from US extradition, his legal team and a swath of citizens in the UK, Sweden, US, Australia and other countries.

Fundamentally it is up to all of us to continue to carry on this struggle, to resist adversarial forces working against democracy. Many have already taken such steps. For example, a law professor at Oxford voiced support for the decision of the UNWG. Such courage creates a path for others to follow.

It is not too late for the West to step onto the right side of history. We can all respond to this call to show the rest of the world how we can become nations that honor the enlightenment values and realize the promise the West once made to the world.