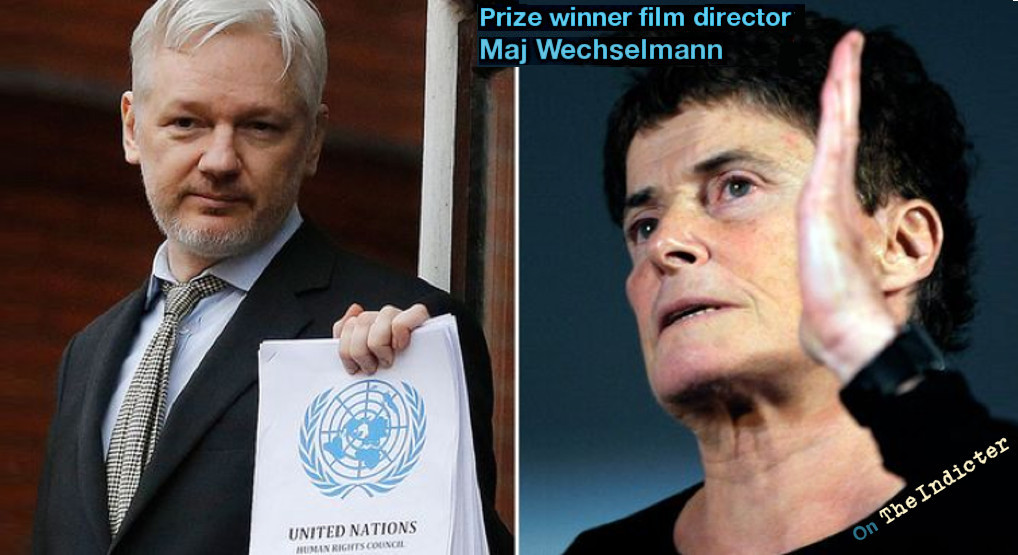 The Indicter, Vol 2, Nr 30, 19 February 2016. By Maj Wechselmann, Film director and filmmaker, Member of The Indicter’s Editorial Board. On February 15, the special adviser to the United Nations Commissioner for Human Rights – Alfred de Zayas –called on Sweden and the UK to immediately discontinue the prosecution against Julian Assange. The […]

Film director and filmmaker, Member of The Indicter’s Editorial Board.

On February 15, the special adviser to the United Nations Commissioner for Human Rights – Alfred de Zayas –called on Sweden and the UK to immediately discontinue the prosecution against Julian Assange.

The Norwegian jurist Mads Andenäs, one of Europe’s most prominent legal scholars, said as early as 5 February, reported by The Guardian: that “the expert lawyers and members of the group had come under considerable political pressure from the US and UK when compiling the highly critical report.” In Andenäs own words:

“I’m absolutely convinced that [the UNWGAD panel] has been put under very strong political pressure,”

Mats Andenäs should know. He was until June 2015 chairman of UNWGAD (UN Working Group on Arbitrary Detention).

As it is known, the working group did not succumb to the pressures exercised by the United States. In representation UNWGAD, secretary Christophe Peschoux said, among other things, that after more than five years, Assange has not even been the subject of a preliminary investigation, and the prospective of whether any formal process take place remains unclear for him.

As a matter of fact, a previous decision to arrest Assange has already been dismissed. Namely, on 21/8 2010, the chief prosecutor Eva Finné declared in the Swedish newspaper Svenska Dagbladet: “I do not think there is reason to suspect that Assange has committed rape.”

According to Swedish TV, the UNWGAD analysis reached the following condemning conclusions:

“Both Sweden and Britain have fundamentally failed to meet their commitments … which must be in accordance with the laws of proportionality.

Sweden has ratified the UN human rights conventions, on which UNWGAD based it conclusions. According to paragraph 9, the conclusion was that Assange has clearly been arbitrarily detained.

If the international human rights system is going to function, the signatory states have to submit to it. There are no other ways. If a state had violated the international law, that state must find ways to implement the panel’s decision.”

How did the UNWGAD conclude that Assange must be considered arbitrarily detained?

Several Swedish journalists consider that Assange’s fear that Sweden would extradite him to the United States is unrealistic.

However, what signals have Sweden sent when already on the 15 of November 2010 they went out after Assange with an Interpol Red Notice against him? Not even during the Lockerbie affair did Interpol issued a Red-Notice alert against Gaddafi.

The UN special rapporteur Juan Mendez works under The High Commissioner on Human Rights. Mendez reported in 2010 about the US treatment of Julian Assange’s source, the 23-year US intelligence officer, now Chelsea Manning. Manning leaked the film on the killing of seven civilians on the streets of Baghdad, by a US helicopter [See video Collateral Murder, click on image below].

Juan Mendez wrote in his report that USA’s treatment of Manning has been cruel, inhuman and degrading, bordering on torture.

Amnesty International has published a description of Manning’s isolation-punishment on In Their Own Words. It is shocking.

Three Swedish MPs, Mathias Sundin (Liberal Party), Jakop Dalunde and Cecilia Magnusson (Moderate Party), tried to obtain asylum for Edward Snowden in Sweden. The U.S. government has accused Snowden of similar crimes to those of Assange. The three Swedish MPs were forced to give up.

What confirms that the case against Assange should be closed down?

–  The fact that Assange after 5 years have not yet been charged.

–  The fact that the chief prosecutor Eva Finné has already dismissed the ‘suspicions of crime’ put forward (by the police) in the Assange case.

–  The fact that the plaintiffs, the two women, have not accused Assange of rape.

–  The fact that Assange risks being extradited to the United States.

The persecution against Assange must end. Close down the case!

Ms Maj Wechselmann, born in Denmark, is a Swedish author and prize-winner film director and documentary producer. She studied film sciences at the Dramatiska Institute, and also medicine. Maj Wechselmann has participated in the Swedish political debate since the 1970’s. Her prolific production, as well as the prizes she has been bestowed upon are full listed in the bio Wikipedia article Maj Wechselmann. She publishes the site Wechselmann Press , and also her analyses have been published at Jinge.se and at The Professors’ Blog. Maj Wechselmann is member of The Indicter’s Editorial Board.