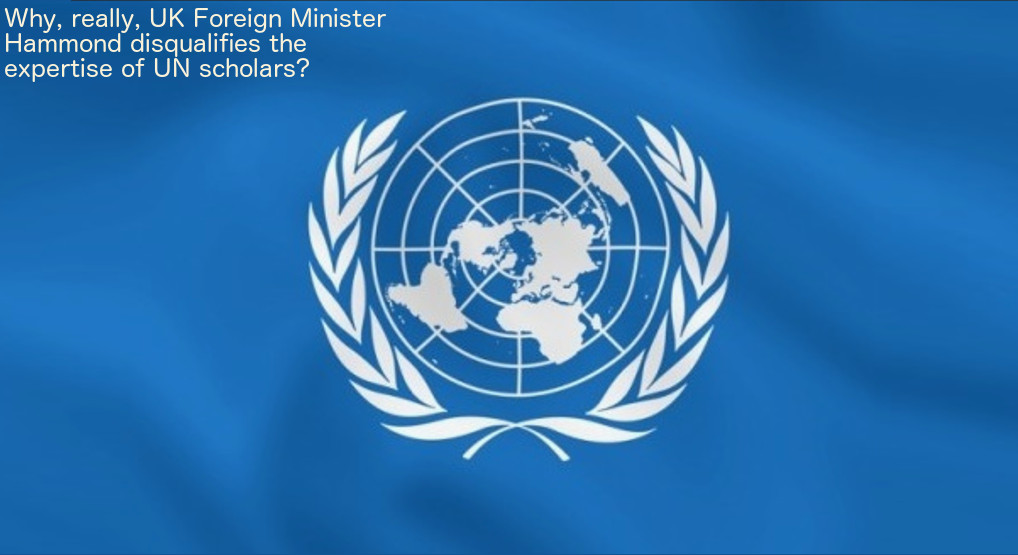 by John Goss, Author and member of The Indicter editorial board The United Nations Working Group on Arbitrary Detention after due consideration reached the conclusion that Julian Assange was being ‘arbitrarily detained’, that he should be released, compensated and given back his passport. Our Foreign Secretary, Philip Hammond, did not agree with the decision – […]

Author and member of The Indicter editorial board

The United Nations Working Group on Arbitrary Detention after due consideration reached the conclusion that Julian Assange was being ‘arbitrarily detained’, that he should be released, compensated and given back his passport. Our Foreign Secretary, Philip Hammond, did not agree with the decision – though when earlier given an opportunity to appeal against the courts findings declined. Instead he waited for their conclusion  and lambasted the international lawyers who had made the advice. This is most improper and childish of someone without a legal background yet so high-ranking in the UK government.

“I reject the decision of this working group. It is a group made up of lay people and not lawyers. Julian Assange is a fugitive from justice. He is hiding from justice in the Ecuadorian embassy.

He can come out any time he chooses.. . . But he will have to face justice in Sweden if he chooses to do so. This is frankly a ridiculous finding by the working group and we reject it.”

First let us see if he is right. Are they lay people? I think not. Click on this link which gives the credentials of the five international lawyers. These are biographies of the United Nations Office of the High Commissioner of Human Rights. The only person commenting adversely on these experts’ credentials and opinions is someone least qualified to do so: Philip Hammond.

Can the UK reject the findings of the Working Group? Yes. One of the problems with international law is that findings can be rejected by a nation state. The UN Working Group is a higher authority than a nation state and the UK has a lot to lose by not applying the advice. You expect countries like Israel and Saudi Arabia not to abide by international law but traditionally, before the turn of the century, not countries like the UK.

All that changed with Tony Blair’s illegal war on Iraq and since then human rights in the UK have gone decidedly downhill. There are all kinds of Acts to hold people in prison without trial, to hold courts in secret so that evidence cannot be tested, to prevent coroners from conducting inquests by replacing the inquest with an Inquiry, as in the recent Robert Owen Inquiry into the death of Alexander Litvinenko. Human rights, going right back to the Magna Carta (1215), are being dumped in the twenty first century. This, I believe, is part of a last-ditch attempt by failing empires to enslave the planet.

I am working on a draft to petition parliament, the European Court of Human Rights, Philip Hammond himself, and Jeremy Corbyn to compel Hammond to obey international law. The UK is a permanent member of the Security Council of the United Nations and Hammond is trying to make a mockery of that body. The reason the League of Nations (predecessor to the United Nations) failed was because certain countries did not abide by League of Nations’ findings.

The powerlessness of the League of Nations was demonstrated most conspicuously in the Lytton Inquiry which investigated the false-flag Mukden Incident (1931), in which the Japanese blew up a railway siding, blamed it on the Chinese, and used it as an excuse to invade Manchuria. Despite Japan being culpable according to the League of Nations, Japan ignored the findings and withdrew from the League of Nations in spring 1933. Three years later Haile Selassie petitioned the League of Nations to intervene to stop Mussolini’s invasion of Ethiopia (Abyssinia). Again it proved to be powerless to help. Finally Hitler’s planned invasion of the Sudetenland, in what may have been a genuine attempt to avoid war by the UK and France a quadlateral agreement between Italy, Germany, UK and France, allowed Germany to march into Czechoslovakia. The League of Nations stayed silent. Some may be old enough to recall that Japan, Germany and Italy were enemies of the allied forces in World War II.

With the case of Julian Assange the UK and Swedish governments are proposing to disobey international law in order to perpetrate the same kind of nation-state criminality the League of Nations was unable to prevent. Even if Julian Assange took advantage of a woman he had earlier that night had consensual sex with, he has been incarcerated for five years, in prison, house arrest and where he is now at the Ecuadorian Embassy. For a first offence it would be more than a severe punishment. Thinking people know that this is an attempt to get him extradited to the United States because of his revelations through Wikileaks of war crimes by that country. We really need to oppose these breaches before we end up being called fascists ourselves.
_________

John Goss, UK, member of the The Indicter’s editorial board, is also a contribution writer and member of the editorial staff of News Junkie Post. He is a former senior technical author with a strong interest in justice and peace. He has a degree in International Studies and a Masters in English (MLitt) both from the University of Birmingham, UK. John Goss is also a playwright, poet and librettist currently working on a novel built around the life of Russian poet Georgy Vladimirovich Ivanov (1894-1958).