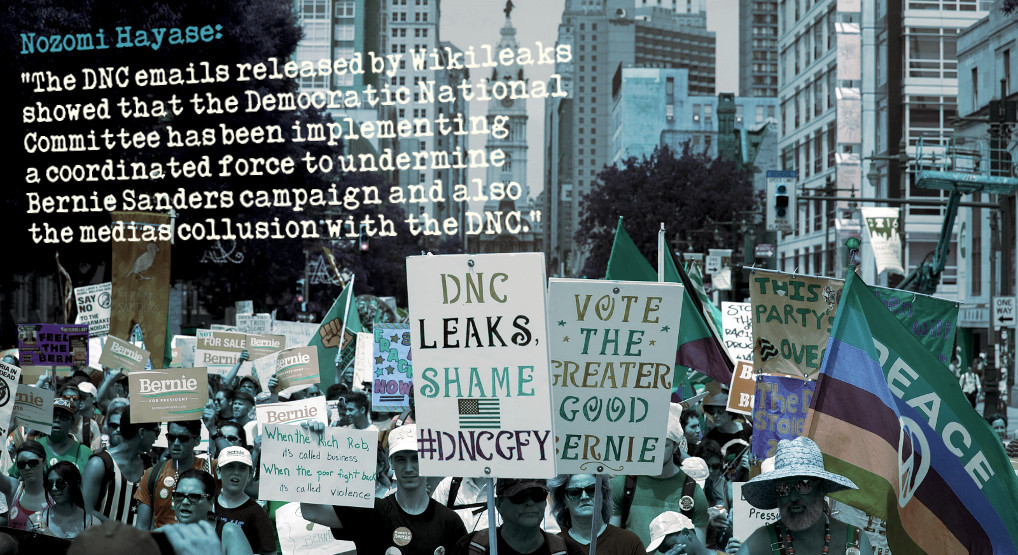 – By Dr Nozomi Hayase – Photo source: ibtimes.co.uk The DNC emails released by WikiLeaks showed that the Democratic National Committee has been implementing a coordinated force to undermine Bernie Sanders’ campaign and also the media’s collusion with the DNC. It is now clear that the democratic presidential primary was rigged from the start. Just […]

The DNC emails released by WikiLeaks showed that the Democratic National Committee has been implementing a coordinated force to undermine Bernie Sanders’ campaign and also the media’s collusion with the DNC. It is now clear that the democratic presidential primary was rigged from the start.

Just before the Democratic National convention kicked off, DNC chair Debbie Wasserman Schultz was forced to resign over the controversy of released documents. In the chaotic first day, Sanders addressed his delegates regarding the next step of his ‘new political movement’. He spoke loudly in a strained voice, “We have got to defeat Donald Trump and we have got to elect Hillary Clinton.”

The completely rigged nature of the primary exposed by WikiLeaks’ publication was not only a gut punch to Bernie supporters, but the response of their candidate that they had worked so hard for was the final blow. “Feel the Bern” was right. His followers got burned. His campaign promises have been revealed as business as usual – just more empty slogans.

In the same breath, after endorsing a candidate who is the embodiment of almost everything that he claimed to fight against, Sanders pledged to continue his ‘political revolution’. Yet, his silence about the DNC’s plot to smear and destroy his own campaign and their complete disregard for the will of the people made it loud and clear what his revolution really is. Sanders’ speech showed where real power lies and his commitment to that power. This reduced his claimed political revolution into mere rhetoric or at worst outright fraud.

The charade politics that took place at the convention in Philadelphia showed what the US election is all about – a mechanism of control to turn American people into acquiescing to corporate power. Just like his predecessors, Sanders had to quickly learn the language of the masters.

After his first election, President Obama who was the recipient of the 2009 Nobel Peace award, successfully neutralized the opposition, persuading the Left that ‘War Is Peace’. This Orwellian Doublespeak of soaring rhetoric that has lost touch with reality has led to a moral vacuum in America.

Here in this corporate occupied territory, like Pokemon GO, voting has become the clicking of an Android button, programmed to suck people into a virtual reality invented by corporate masters. Left is right, right is left. Hillary Clinton now aims to expand her impeccable track record of war mongering and corporate shilling with Tim Kaine as her choice of vice president, whom an oil industry lobbyist praised to be the best in class. As she moves to the right, Donald Trump, a long-term friend of Clinton preys on Bernie supporters. It is two feet moving in the same direction. Step by step, US voters are being led by the invisible hands of corporate fear marketing, walking toward the cliff.

As Chris Hedges astutely stated, in this country “there is no functioning democracy”. Sanders’ betrayal is a symbol of what the Democratic Party has become—a point of no return. As the theater of pretend democracy continued in the convention, Obama in his speech cited the Declaration of Independence, urging the nation to unite with Hillary to defeat Trump in order to “form a more perfect union”.

Yet, the signers of the Declaration didn’t write these words from on high, trying to coerce people into a false harmony. They stood by these words by putting their lives on the line, fighting for the rights of the people. They also declared, “whenever any Form of Government becomes destructive for these Ends, it is the Right of the People to alter or abolish it”.

When checks and balance of power are broken, democracy’s fail-safe does not reside in voting. It lies in ordinary people’s refusal to engage in abstraction delivered by feel good words and fear and instead to exercise free speech, acting on ideals inspired in the heart. When we fully come to terms with reality, we can find strength within ourselves to solve problems in our lives. We can see a new hope, one that will not blind us from the truth, but one that constantly demands courage for the truth.

This new hope is emerging. Information provided by WikiLeaks has begun to shift the balance of power, sparking courage in people to defy illegitimate authority. Opposition was formed inside the Democratic convention. As Sanders’ delegates were being pushed to the back of the hall, some courageously walked out from this control grid of false dichotomy. Crowds chanted for WikiLeaks outside the convention. WikiLeaks banners and signs were held up as Hillary took the stage.

Journalism around the world has been failing. While the media puts corporate interests before the people’s, we now have a transnational organization that is true to the principle of the free press. In a 2011 CBS interview with 60 Minutes, Julian Assange spoke of how WikiLeaks was founded on the values of the US revolution. In its 10 years of existence, it has an impeccable track record of publishing authentic documents that are in the public interest.

In 2007, the organization released a secret intelligence report just prior to the national election in Kenya that affected the outcome of the election. In 2009, WikiLeaks exposed the moral bankruptcy of Iceland’s largest bank. They inspired politicians and people to create an offshore haven for free speech. Democracy is thriving there. The Pirate Party that defends civil liberty has now gained the largest party status in the country. Earlier this year, WikiLeaks released the records of a teleconference between two top IMF officials in charge of managing the Greek debt crisis. They also just released the emails of AKP, the ruling party of Turkey, where President Erdogan is now proceeding with a purge, shutting down dozens of news organizations and firing teachers after the failed coup d’état.

In their tenacious work as a publisher of last resort, WikiLeaks has resuscitated democratic functioning for the people. This time it is America. As poet and civil right activist Audre Lorde once wrote, “the master’s tools will never dismantle the master’s house”. Unlike the US mainstream press that worked to influence politics and sabotage the outcome for the American people and a company like Facebook that obstructs democratic dialogue through censorship, WikiLeaks now is giving us our own tools. Information is the currency of democracy, through which informed citizens working arm and arm now have a chance to dismantle the master’s house.

The battle is not about the lesser of two evils. What is at stake is our democracy that would determine our future and that of our children. The outcome of the election of this Empire States of America will inevitably affect the whole world.

A political party maintains its legitimacy through blind consent of the governed. It is the masses that uncritically rally around and remain obedient. We no longer need such leaders to act on behalf of us. We no longer need to demand Sanders to repudiate his endorsement of a candidate who is committed to corporate interests above all else. We can refuse to support any politician who claims they will save us from the mess that they have created.

Solutions are here. Green Party candidate Jill Stein is now strongly backing ranked choice voting, so that people don’t have to give away the right to vote in the rationale of ‘strategic’ voting or acting out of fear. We can join those who are striving to carry the torch of what our forebears have fought for; the Civil Right Movement, Women’s Suffrage, Labor Movement, Environmental and Peace and Social Justice Movements. Civil rights are more than an ability to vote for a preselected candidate every 4 years. It is about freedom to set our own agendas and determine the course of our own future.

If we truly want a real democracy, if we really care about ourselves, the American people must eradicate fear and break this deadly addiction of the lesser of two evil politics that serves the same masters. We are the ones who can carry on the revolution that so many leaders promise and fail to deliver.

Through building unity around truly progressive agendas, we can start representing our own interests and walk away from this master’s house of the two headed-corporate beast. After all, it was in Philadelphia 240 years ago, where the most brave among us rebelled against the tyranny of an authoritarian state in order to declare Independence. It is that time once again.