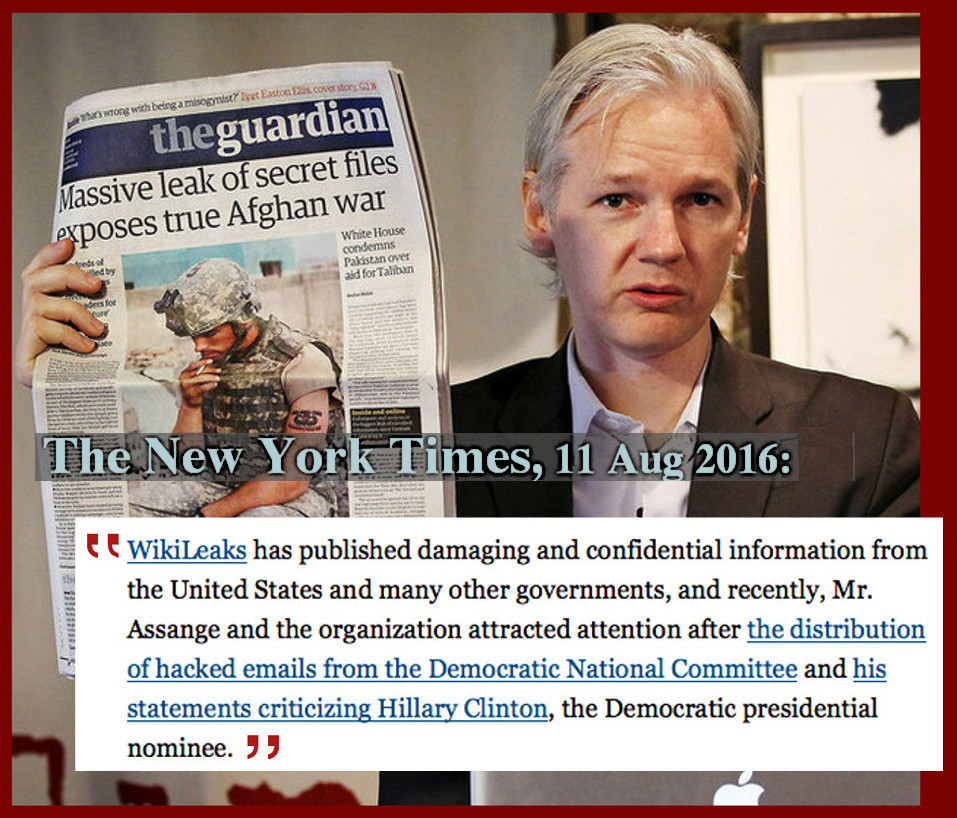 By Professor Marcello Ferrada de Noli, chairman of Swedish Doctors for Human Rights. Interesting developments in the case Assange in Sweden. On the 11 August 2016, the main Swedish Radio (SR) news-program “Ekot” (07.30) acknowledged that Julian Asange is at the Ecuador’s Embassy in London in connection to “fear of being extradited to the […]

Interesting developments in the case Assange in Sweden.

On the 11 August 2016, the main Swedish Radio (SR) news-program “Ekot” (07.30) acknowledged that Julian Asange is at the Ecuador’s Embassy in London in connection to “fear of being extradited to the US”. This was in the context of the announcement that Assange’s lawyers are pursuing a new appeal at the Stockholm Court to obtain his release, based in the verdict of the UN-panel which is commented in the article here below.

In spite no further details were given by SR on this particular item, it was the first time at the state-owned Swedish media that the the political asylum of Assange in the embassy of Ecuador was not explained  by the reiteration  “is-only-to- avoid-Swedish-justice”.

In other parallel development, The New York Times also acknowledged that “Although there is no open indictment against Mr. Assange in Washington, he and WikiLeaks are the subject of an investigation in the United States.”

A Swedish version of this article was published in Västerbotten Kuriren.

The United Nations’ Working Group on Arbitrary Detention (UNWGAD) has ruled that the detention of Mr Julian Assange is illegitimate and in breach of Articles 9 and 10 of the UN Universal Declaration of Human Rights as well as with several articles of the International Covenant on Civil and Political Rights. [1] Mr Julian Assange should be set free, states in UNWGAD [2] and points out that Sweden is a signatory to both conventions on which the decision is based. [3]

Why was U.S. exerting pressure on UNWGAD?

The Norwegian jurist Mads Andenas, then chairman of UNWGAD, recently declared that the US exerted “considerable political pressure” to influence the conclusions of the UNWGAD’s report on the Assange case. [4] Why is the U.S. applying pressure regarding the arresting whereabouts of Assange?

The direct pressures exercised by the U.S. government onto UNWGAD reveal their direct interest in that Assange should be kept detained under the Swedish arresting warrant. Further, there is yet an aspect that needs to be reminded about in the context of this case: The mediate aim of the arresting warrant – that U.S. stressed to be kept enforced – is not the “interrogation of Assange”, but the transport of Julian Assange into Sweden. That, together with the following, it makes the incumbent U.S. extradition-request to Sweden quite obvious:

Assange will be charged according to the US Patriotic Act that define specific computer crimes as terrorist attacks [5], as well as the CFAA (Computer Fraud and Abuse Act, 1-a). [6] We have to consider these facts against the backdrop of a series of statements by prominent U.S. politicians accusing, implying or equalizing WikiLeaks activities with anti-American “terrorism”. The very Vice President of the United States has unambiguously described Assange as “cyber-terrorist”. [7]

Already in December 2010 CNN informed that Swedish authorities knew that “a secret grand jury in Alexandria, Virginia, is meeting to consider criminal charges in the WikiLeaks case”. [8] Alexa O’Brien confirmed in 2014 the continuity of this case. [9]

Further, Kevin Gosztola reported in 2015 the on-going case against WikiLeaks and its founder Julian Assange. Among the facts reported: a) the Grand Jury in Virginia on WikiLeaks continues being empaneled; b) The US government had even sent warrants to Google for the transcription of documents and information on Julian Assange and members of the WikiLeaks staff for the purpose of a case dealing with violations of the Espionage Act, Computer Fraud and Abuse Act (CFAA) and a “conspiracy to commit offense or to defraud the United States”; an c) The US Department of Justice announced that there is an on-going FBI criminal case against WikiLeaks and that records should no be make public because it would harm “pending future prosecution“. [10]

NBC News reported that a legal panel has predicted that “Assange will be indicted”. They also reported that Attorney General Eric Holder said, “Charges may be brought under the Espionage Act of 1917 or other laws”. One of the panel members, Paul Rosenzweig (Heritage Foundation, and former Homeland Security official), affirmed that an U.S. indictment against Julian Assange is 80 per cent likely, and that “it’s a political necessity”. [11]

In applying the anti-terrorism legislation, the Swedish government has the legal power to execute the extradition of Assange to the US without the consent of any court of justice.

Another important item that it has so far not deserved a proper attention is this: Provided that the US extradition request will be based, as indicated above, on an indictment which consider crimes committed in the sphere of ‘terrorism’, the legal prospective in Sweden in the managing of such a request is also special:

Judge Krister Thelin, formerly the chairman of the committee that studied the Swedish extradition law, communicated to me via Twitter that whereas in normal cases of extradition – even politically related – all cases are to be treated in court, when there is a request involving terrorist activities the Swedish government has instead “wide discretion” in managing those extradition cases. [12]

And that is the reason why Julian Assange sought political asylum in Ecuador’s embassy, and the reason why his asylum was granted by the Ecuadorian government. [13] He did not flee from the Swedish justice, he has not refused to be questioning by the prosecutor, neither he has been charged of any crime. In addition, the Chief Prosecutor Eva Finné after having minutely examined the case stated: “I do not think there is reason to suspect that he has committed rape.” [14]

By refusing to abide by UNWG ruling, Sweden, not Assange, is under legal scrutiny

Sweden did not contest UNWGAD’s legitimacy but instead participated by responding to communications sent by the UN legal counsel group. [15] However, after the decision was unfavourable to Sweden, its authorities said that they would not accept neither would regard such a decision as binding. The Interior Minister commented that the Swedish Supreme Court has its own decision, [16] and his party colleague Thomas Bodström, former Minister of Justice (then main partner in the law firm Bodström & Borgström, that asked for the reopening of the case against Mr Assange), declared to the Swedish TV, “a United Nations organ cannot be upper a Swedish court.” [17]

Numerous international human rights organizations have criticized this new awkward bearing of the Swedish authorities regarding the Assange case.

The blunt rejection of Sweden to a verdict of a panel of international jurists appointed by the US is considered detrimental to the human rights situation in the world. By a similar decision could UNWGAD achieve the release of Aung San Suu Kyi in Burma, the Washington National Post journalist Jason Rezaian in Iran, President Mohamed Nasheed of the Maldives, etc.

To the best of my knowledge, in addition to Egypt, Sweden is the only country that has rejected such a UN decision, and this position can hardly help Sweden to get a seat in the UN Security Council in the upcoming election in June 2016. Human Rights Watch concluded that the neglecting by Sweden of the UN-organ ruling on Mr Julian Asange’s arbitrary detention has “seriously damaged” Sweden’s reputation. [18]

This week starts the 31st session of the UNHCHR in Genève. UN High Commissioner for Human Rights Zeid Raad Al Hussein has messaged:

“Human rights law, the treaty body law is binding law, it is not discretionary law, it is not some passing fancy that a state can apply sometimes and not in the others.” [19]

Swedish Doctors for Human Rights call on Swedish authorities to abide by UN’s decision and rescind the arrest of the WikiLeaks founder Mr Julian Assange.

”The deprivation of liberty of Mr. Assange is arbitrary and in contravention of articles 9 and 10 of the Universal Declaration of Human Rights and articles 7, 9(1), 9(3), 9(4), 10 and 14 of the International Covenant on Civil and Political Rights. It falls within category III of the categories applicable to the consideration of the cases submitted to the Working Group.”

”Consequent upon the opinion rendered, the Working Group requests the Government of Sweden and the Government of the United Kingdom of Great Britain and Northern Ireland to assess the situation of Mr. Assange, to ensure his safety and physical integrity, to facilitate the exercise of his right to freedom of movement in an expedient manner, and to ensure the full enjoyment of his rights guaranteed by the international norms on detention.”

”The Working Group considers that, taking into account all the circumstances of the case, the adequate remedy would be to ensure the right of free movement of Mr. Assange and accord him an enforceable right to compensation, in accordance with article 9(5) of the International Covenant on Civil and Political Rights.”

“Sweden and the United Kingdom of Great Britain and Northern Ireland are parties to the International Covenant on Civil and Political Rights.”

“The former chair of the UNWGAD panel, the Norwegian lawyer Professor Mads Andenas, told Owen Bowcott that the expert lawyers and members of the group had come under considerable political pressure from the US and UK when compiling the highly critical report.

Andenas completed his term in office last summer but was involved in earlier stages of compiling the report on Assange’s arbitrary detention. He endorsed the broad result of the findings released on Friday.

“I’m absolutely convinced that [the panel] has been put under very string political pressure,” he said.

“This is a courageous decision which is important for the international rule of law.”

“Federal crime of terrorism” means an offense that—

(A) is calculated to influence or affect the conduct of government by intimidation or coercion, or to retaliate against government conduct; and

“Let’s be clear: the issue is not Assange fleeing Swedish justice; he has continually expressed his willingness to be investigated by Sweden. What he won’t do is risk eventual extradition to the United States, which would like to prosecute him under the Espionage Act.”

“(UK and Sweden) have severely damaged their own reputation for being so ready to dismiss upholding inconvenient human rights obligations and their credibility as global advocates for rights by refusing to respect the institution of asylum.”