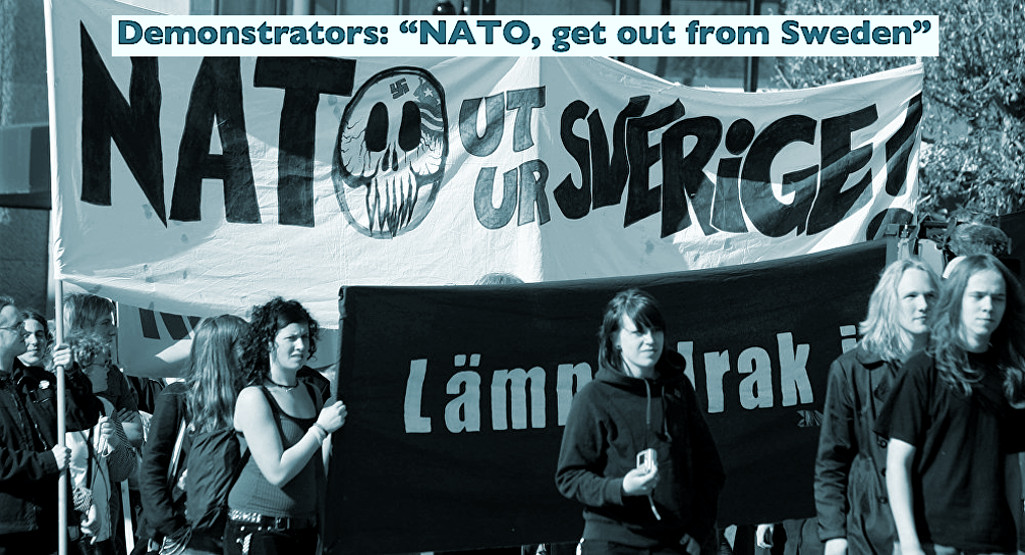 Above: Demonstrators demand ‘NATO, get out from Sweden’

During the Cuban missile crisis, President Kennedy discussed with his advisors the various  options available. One involved a limited attack on  Soviet missile bases. Moscow was supposed to accept such a response rather than fight back in a way that would result in the devastation of both the U.S. and the Soviet Union.

During the years from 1950 into the 1980s there was a doctrine of military strategy and national security policy known as MAD (mutual assured destruction). MAD means that if a great power attacks first, it will always be possible for the attacked nation to retaliate. The ability to strike back served as a sufficient deterrent.

The relative security that the MAD doctrine created no longer exists. The U.S. and Russia now mutually accuse each other openly of constituting an “existential threat”. The military-strategic balance is becoming increasingly uneven.

The U.S. nuclear rearmament and NATO’s encirclement of Russia have created a highly insecure and dangerous situation. The advantages of having the “first strike” becomes harder to resist. With the support of NATO, Romania and Poland are now installing a new American “defense” robot system called “Aegis Ashore”. President Putin has warned the two countries that in case of a military conflict, they will now become the primary objectives. Russia’s concern for a disarming first attack appears to be genuine. Whether the concern is well-founded, we can not know. What is crucial to our security are the actual thoughts and plans of each superpower.

Former US Defense Secretary William Perry has warned that the risk of a nuclear war is now greater than  ever. The reasons are, among other things, the following:

NATO is strong globally. Compared to Russia, NATO spends ten times more money on weapons. Many countries assume that becoming a member of NATO provides protection. But when there is an asymmetric military balance, the logical consequence will be the opposite. Should US / NATO strike from bases bordering on Russia, the Russian military leaders will not have time to react.

Russia has made it clear that such a situation will not be tolerated. Therefore, Russia currently applies a nuclear doctrine that allows for a nuclear strike with restrictions (“The Concept of De-escalation”). The intention of this doctrine is that with a limited first attack, the strike will make continued warfare less likely. By not fighting back, the U.S. will avoid the risk of an extension of the conflict to its own territory. Would an American president be willing to devastate his own country in order to retaliate against a Russian strike on bases in Europe?

The military-strategic situation is thus extremely unstable. Countries bordering on Russia that have allowed the installation of NATO bases are at an increasingly greater risk of becoming prime objectives. The outcome of the US presidential election brings no relief – whatever will be the outcome.

When Western politicians do not distinguish between “cause and effect”, provocation and reaction, the consequences can be devastating. Russia now faces three choices, in terms of dealing with NATO:

President Putin has indicated that it is the third military scenario that Russia is now considering. The only question is when. The loser, in whichever case, will be Europe.

Sweden’s rapprochement to NATO has increased the risk of our country being drawn into a war. Therefore, it is particularly important to Sweden and other European countries to support all initiatives aimed at détente and disarmament – and thus create a public opinion that will distance us from NATO.

Translated from Swedish by Siv O’Neall.

This article was originally published in Göteborg Posten [Swedish]. The English version it originally appeared in Global Research.

Dr Leif Elinder is a senior member of Swedish Doctors for Human Rights and a renowned Swedish debate-author, with publications among other in main newspapers DN, Göteborgsposten, Västerbotten Kuriren, etc. He has also published on medical research issues in the Swedish Medical Journal (Läkartidningen) and Dagens Medicn.

Dr Martin Gelin D.M.D. Dental Surgeon, Orthognathic Orthopedics (retired), is a senior member of Swedish Doctors for Human Rights. Dr Gelin has been inventor, designer of various medical, surgical and other items. He has been also proprietor, Mgn Director  of The Gelin Export Co. Fine wines of Australia.

Professor Anders Romelsjö is vice-chairman of Swedish Doctors for Human Rights and the publisher of the political blog Jinge.se. He is co-author of the

book (Swedish) “USA as World’s Police”. Prof. Romelsjö is also member of The Indicter editorial board.