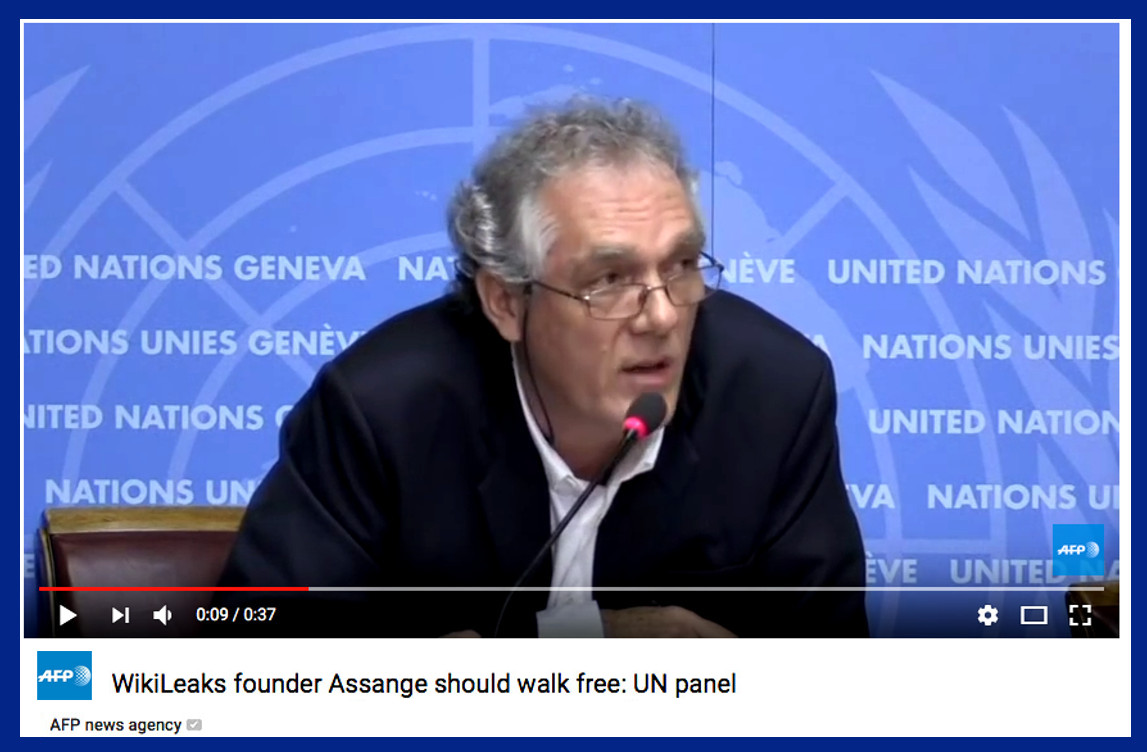 By Professor Marcello Ferrada de Noli, Chairman, Swedish Doctors for Human Rights – SWEDHR. . Summary. Now that the Swedish TV and media have finally acknowledged the risk of extradition of Julian Assange to the US, prosecutor Marianne Ny has embarked in a remarkable campaign to influence the court’s decision. Assange’s freedom is at stake, […]

Summary. Now that the Swedish TV and media have finally acknowledged the risk of extradition of Julian Assange to the US, prosecutor Marianne Ny has embarked in a remarkable campaign to influence the court’s decision. Assange’s freedom is at stake, and so is the issue of the international prestige of Sweden. Marianne Ny has renewed her old and unfulfilled promise to interrogate Assange in London. However, what are the real intentions behind the new Swedish announcement of an interrogation of Julian Assange?

As facts demonstrate, the interrogation of Mr Julian Assange has already been conducted in Sweden. Further, several scholars debating recently this issue – including a former Swedish prosecutor – concur on that a new interrogation of Assange in London is not only unnecessary but also deceiving.  A main thesis here is that the announcement of an incumbent  interrogation of Assange –as now again has been put forward by the Swedish Prosecutor Authority– represents anew a maneuver by the prosecutor aimed to influence upcoming decisions of the Swedish court regarding the appeal recently presented by Assange’s lawyers. Essentially, the same mechanism was assayed before by the prosecutors during the Spring 2015. I.e., the Swedish Court ruled against the appeal for Assange’s freedom in the believe that an interrogation would be conducted in London – as it was announced in previous days by the prosecutor. Which it never happened.

In both instances, Mr Assange’s lawyers put forward the recent decision of the UN panel on the immediately freedom of Assange. What the court should be consider in the first place is the respect regarding this UN ruling, which comprises a decision of an official body belonging to the highest organism representing international law: The United Nations.

“For small nations to be respected, international law is crucial. We can’t see anything positive if big powers try to create their own laws and their own principles to imprint that on the international community.”

Indeed. The problem is that Sweden appears doing exactly the opposite. On the one hand creating a series of legal process-rules that contravenes the international praxis of democratic countries; for instance, the institution of lay judges which conform the majority at the courts in spite they are elected by political parties and not by the magistrate authority.  Or that the Montesquieu-kind separation of powers is in fact not applied in Sweden in certain cases implicating geopolitical interests, such as the “Assange case”.

On the other hand Sweden is not respecting ruling based in international law. Previously, one most illustrative case is the one of the secret collaboration of Swedish ministers with the CIA to help implementing CIA’s extraordinary rendition program. For this, for contravening the International Convention banning the use of torture, UN sanctioned Sweden. But nowadays, the most flagrant case of Sweden’s neglect of international legal-ruling is their position against the UN-panel known as the UNWGAD, whose verdict  was that the detention of Mr Assange has been arbitrary, and therefore requested his immediately release.

Among the odd aspects of the ‘legal case’ of Sweden versus Julian Assange, we have found that the Swedish Prosecution Authority has deleted from the series of press releases on its website [1] the early press releases by the first prosecutor who assessed the case evidence, Chief Prosecutor Eva Finné.

After both complainants had been interrogated, and the Swedish pro-NATO newspaper Expressen had published that Assange had been detained under accusations of ‘rape’, [2] the Chief Prosecutor Eva Finné concluded that there were no grounds for such ‘charges’, nor for his detention, and publicly declaring that Julian Assange was to be set free. The Guardian reported the following on 21 August 2010 (the day after the women’s visit to Klara police station):

“The Swedish Prosecution Authority website said chief prosecutor Eva Finné had come to the decision that Julian Assange was not subject to arrest. In a brief statement Eva Finné said: ‘I don’t think there is reason to suspect that he has committed rape’.” [3]

However, the Swedish Prosecution Authority’s press-release series on the Assange case, which they say includes all prosecution statements from 2010 to 2015, omits the above statement by Eva Finné. Instead, the series starts with the “Request for detention of Mr. Assange (2010-11-18)” press release by prosecutor Marianne Ny – nearly three months after the start of the investigation. In that press release, Ms. Ny states she has requested that the District Court of Stockholm detains Mr. Assange in his absence: “The reason for my request is that we need to interrogate him. So far, we have not been able to meet with him to accomplish the interrogations.” [1]

Now, six years later, why is it that the interrogation of Julian Assange that was conducted on 30 August 2010 is not mentioned at all in the current debate?

The facts: The website Rixstep documented that “the interrogation took place at the Family Violence Unit of the police at Bergsgatan 48 in Stockholm, began at 17:43, and concluded at 18:37.” Besides Julian Assange, four other people were present at the 30 August interrogation, according to the Rixstep report: Mats Gehlin (the chief interrogator); Ewa Olofsson, police interrogation witness; the interpreter Gun von Krusenstjerna; and Assange’s lawyer Leif Sibersky. It is added: “Julian Assange’s testimony was later translated and transcribed by Jennie Wolgast.” [4]

It is of most interest to remind here that the case was reopened at the request of a politician, Claes Borgstrom, at the time the main partner in the law firm Bodström and Borgström (Thomas Bodström is a former Swedish Justice Minister, and at that time residing in Virginia, US).  One of the women declared that she felt “railroaded by police and others around her”. She even sent messages from the very police station in which she was at the moment, saying that she “did not want to put any charges on Julian Assange but that the police were keen on grabbing him”; and that she “did not want to accuse Julian Assange for anything”; that “it was the police who made up the charges”. All this is found in the police report. [5]

Recently, the Swedish prosecutor’s office announced that they would accept Ecuador’s latest offer to interrogate Julian Assange at Ecuador’s embassy in London. This announcement was made by the Prosecution Authority on 11 August 2016 (a day after it was published in the Swedish press about Assange’s lawyers file for appeal).

The 12 of August the former prosecutor Mr. Rolf Hillegren wrote in Svenska Dagbladet, a leading Swedish newspaper: “All who have read the witness statements of the case would recognise that the upcoming interrogation is totally unnecessary.”

In the opinion of this scholar – Mr. Hillegren is a prosecutor with vast experience in reviewing such cases – “The Assange case, it’s crystal-clear, should be dismissed.” And, with regard to the upcoming interrogation in London, Hillegren states that Assange has been “interrogated enough already in 2010.” [6] The publisher of Magasin Para§raf, Dick Sundevall, is of the same opinion in his article “Assange has already been interrogated”, recently published in an English translation by SWEDHR Research & Report. [7]

Further, Rolf Hillegren’s article wonders why would Marianne Ny suddenly decide (on 13 March 2015) to change her mind about not interrogating Assange in London and instead announce for the first time that she was willing to conduct an interrogation at the London embassy.

I believe I have found the explanation, which also dates from 13 March 2015 [8] and was mentioned during an interview done by German newspaper Deutsche Welle’s journalist Matthias von Hein. The following passages come from a report by Dr Armando Popa on the Deutsche Welle interview that was published by SWEDHR Research & Report: [9]

“The subject of why prosecutor Marianne Ny suddenly decided in the Spring of 2015 to interrogate Assange in London (or give the pretence that she wished to carry out the interrogation) has not been the object of enough analysis in the international press. General comment centred around the fact that the Swedish prosecutor had made a 180-degree turn on her position. Why?” The SWEDHR chairman had assayed this rationale already on 13 March 2015: “… Prosecutor Marianne Ny has now (this Spring) announced she is ready to interrogate Assange in London. It is because the Swedish Supreme Court has recently decided, at the request of Assange’s lawyers, to take up the case in view of ‘the conduct of the investigation and the proportionality principle’.”This unequivocally referred to the prosecutor’s conduct in not carrying the investigation forward. And this, in its turn, anticipated the dismissed of the case by the Supreme Court.” [8] In other words, the main rationale for the Supreme Court’s decision in May 2015 to uphold Julian Assange’s arrest warrant was this ‘impending’ interrogation Marianne Ny had announced two months earlier in March.

Another 18 months later, this is the very same reason – and seemingly under the same mechanism – why Sweden is now finally replying to Ecuador that the prosecutor is willing to perform the “interrogation of Assange at the Embassy in London”. What’s really happened is that Assange’s lawyers have recently presented to the Swedish SVEA Court [equivalent to the UK High Court] a new appeal for the release of Julian Assange based on the resolution of the UN Working Group on Arbitrary Detention, [10] which requested the immediate revoking of the arrest warrant, and the release and compensation of Mr. Assange. This, predictably, is what has led to the Swedish prosecutor’s 11 August announcement of an interrogation of Assange in London.

My conclusion is that the Swedish prosecutor have never really been interested in conducting an interrogation with Julian Assange – in Sweden, London or elsewhere – and which would lead to his release. What the Swedish authorities have instead demonstrated all along is that they in fact do whatever they can to protract the case. Those who wish to keep Assange ‘detained’ are those who wish to keep the WikiLeaks endeavour ‘detained’, or at least obstructed.

This has never been a ‘legal case’. It is only a political case and, unfortunately, it has morphed into a case of Sweden vs. Human Rights. [11] The fact being that the interrogation of Assange in London promised by the prosecutor Ny never took place. It would be also highly worrisome that decisions at an independent court of justice would be anew influenced by a prosecutors’ announce deprived of serious intent.

UN-WGAD statement requesting Sweden and the UK to immediately release Mr. Julian Assange. Click on the image above for the Video

[4] Assange in Sweden: His Own Words. Rixstep, 30 Jan 2011. The transcription of the interrogation is also included in the Rixstep report.