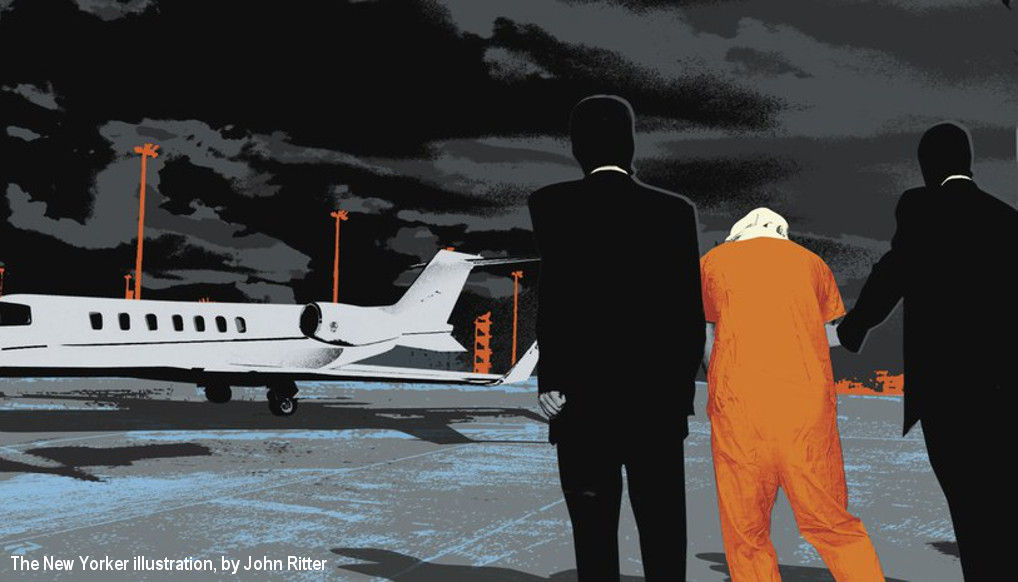 By Professor Marcello Ferrada de Noli, Chair, Swedish Professors & Doctors for Human Rights. Image above, from The New Yorker article by Jane Mayer, “Outsourcing Torture“ As a legalized concept of international acceptance, Human Rights is considered a ’modern’ instrument, brought by the United Nations in 1948 after the ‘horrors of the Second World War’. […]

Image above, from The New Yorker article by Jane Mayer, “Outsourcing Torture“

As a legalized concept of international acceptance, Human Rights is considered a ’modern’ instrument, brought by the United Nations in 1948 after the ‘horrors of the Second World War’. However, the legal protection of individuals under arrest can be traced centuries before. Persian king Cyrus the Great issued 2559 years ago a law establishing civil rights for all, to be applied event to those defeated in war, which included the detainees. The Romans followed suit in its “natural law” codex, then the Magna Carta of 1215, the French Revolution’s ‘Declaration of the Rights of Man and of the Citizen’ of 1789, etc.

Through that historical context, it is difficult to find a more flagrant – and also a more comprehensive– violation to the individuals’ civil rights, than the practice of ‘extraordinary renditions’. In essence, ‘extraordinary rendition’ is about the kidnapping of a foreign citizen by Intelligence or enforcement government agencies, act which is perpetrated in yet another country. This practice was commenced by the US government in 1987, with the abduction of a Lebanese citizen from a yacht that was in Italian waters.

After 2001, the U.S. implementation of ‘extraordinary renditions’ has required the secret collaboration of some EU governments and others around the world. For instance, Sweden collaborated secretly with the CIA in the rendition of two refugees that were transported from a Stockholm airport to a torture site in Egypt. Because of that, the United Nations HR sanctioned Sweden for violating the UN’s Absolute Ban on Torture. Furthermore, Lithuania and Poland had faced denounces of arbitrary detention and renditions before the European Court of Human Rights. These last named were two countries in Europe where CIA secretly held its prisoners, the so called ‘black sites‘.

In terms of infringements against human rights conventions and international law, extraordinary renditions are notably comprehensive; they accumulate multiple offences in one act. The abduction itself (kidnapping) is a crime penalized by all legislation. Also, human rights authors add the arbitrary arrest, the forced transportation, the forced medication, denial of consular assistance to the abducted, etc. And to this constellation of infringement has to be added the perpetration of torture in a variety of cases, as it has been documented.

U.S. extraordinary renditions far beyond the “Global war on terror”

‘Extraordinary renditions’ did not come as an isolated instrument of coercion, but emerged in an epoch of multiple transgressions against civil rights and international law.

When the imperialistic order began to redesign its geopolitics, also the use of a new kind of illegal enforcement emerged concomitantly. These are not measures intended exclusively for the “Global war on terror”, but they were enhanced (or designed) to serve as well other enforcing commitments or even geopolitical aims at large. In this line, the practice of extraordinary renditions has come to replace in many cases legal extradition processes. An illustration of this ‘policy’ is given in the abductions by the U.S. of Russian citizens, as it was the case of Yuri Martishev, Konstantin Yaroshenko and Roman Seleznev.

The detention of the three Russian citizens presents important additional issues, which combined could show a pattern of behaviour. Their detention took the form of the classic renditions, meaning, secret collaboration of enforcement officials in a foreign country, transporting to another country-destination than arresting site. In addition, two harsh (long) sentences based in ‘sting operations’, and –according to press reports– also in cases where no actual crimes have been committed. One of the sentences (in the case imputing cyber crimes), allegedly hits in the U.S. the record in severity for such charges. Secondly, the U.S. agencies apparently acted in disregard to the 1999 bilateral agreement between the U.S. and Russia on mutual legal assistance in criminal matters. Thirdly, according to one of the prisoner’s lawyer, the U.S. would also have ignored the U.N. International Covenant on Civil and Political Rights.

Regardless geopolitical motivations and/or constructions, the question will remain, has the U.S. (or any other country, for that part), the right to arbitrary exercise or impose its own legislation in other countries ­and to the extent of disrespecting the international or bilateral treaties they have signed? What would be, for instance, the future of bilateral agreements on extradition?

Adding the crime of torture

Another hallmark of the above-described process of arbitrary measures infringing the civil and human rights, has been the public ‘acceptance’ by some head of states of the use of torture at interrogations, euphemistically called, “enhanced interrogation techniques”. President Bush, for instance, authorized the ‘Secret detention program’, or ‘black sites’, where CIA kept detainees. There are some concerns, among other raised in the Washington Post, that a draft of an executive order on “Detention and Interrogation of Enemy Combatants”, which has been leaked, it “appeared designed to make it possible for the Trump administration to return to Bush policy of secret kidnapping, detention and interrogation of suspected terrorists.” (Washington Post, 9 February 2017). It is also reported that Trump has publicly backed away from some aspects contained in the order-draft.

The reports of a variety of abhorrent or cruelty treatment and degradation of detainees, for example the cases of Abu Ghraib or Guantanamo, should also be present makes in these discussions. They also have signified deprivation of basic legal rights for detainees; among others, the right to have its case treated in court. And then we have cases of long arbitrary detentions without the arrested being charged of any crime.

The threats of extraordinary renditions on whistleblowers

The new imperialistic order has felt increasingly threatened by the whistleblower movement. The U.S. establishment’s position against the organization WikiLeaks, founded by the independent publisher Julian Assange, is perhaps the most prominent cases in this regard.

The protracted arbitrary detention in which Mr Assange has been subject by Sweden and the UK is in my opinion a most clear illustration of this development towards the neglecting of the Human Rights Declaration and the U.N. International Covenant on Civil and Political Rights.

As a matter of fact, the eventual  extraordinary rendition of the WikiLeaks founder has also been in the suggested measures to silent the organization. SWEDHR earlier denounced this initiative in “Pro-Clinton media calls UK to suspend diplomatic immunity of Ecuador Embassy over WikiLeaks publication…“

Nevertheless, the disregard by the countries involved in this arbitrary detention in abiding with the recommendations of the UNWGAD panel continues unabated.

Why a new universal declaration of human rights has become necessary

The prevalent Human Rights Declaration by the United Nations, from 1948, was deemed necessary after the ‘horrors of the Second World War’–as it was argued– perpetrated by the Nazis. In fact, there were yet other horrifying episodes of vast devastation against civilian populations exercised by ‘Western democracies’, most notably the bombardment of Dresden and the nuclear bombing of Hiroshima and Nagasaki.

For the reasons above, because of this new emerging practices from governments which disregard the civil and human rights agreed upon in 1948, and continuing infringes the ensuing international treaties that supported those rights, we believe that is highly the time for the international community to agree and secure a new Declaration of Human Rights. Issues of extraordinary renditions, arbitrary detention, ‘black sites’, disregard for legal processes of extradition between countries, etc. has to be promptly addressed. And there are also other issues to add to the new chart, such as the issue of migration and refugee status, which are nowadays constantly manipulated by Western governments on behalf of their geopolitical interests.

The long and historic tradition of respect for civil rights has to be reestablished, to help averting war, and thus to preserve not only the human rights, but humanity as a whole.

The above text is an extended version based on an article originally published in Izvestia. See article [in Russian] in the facsimile below.