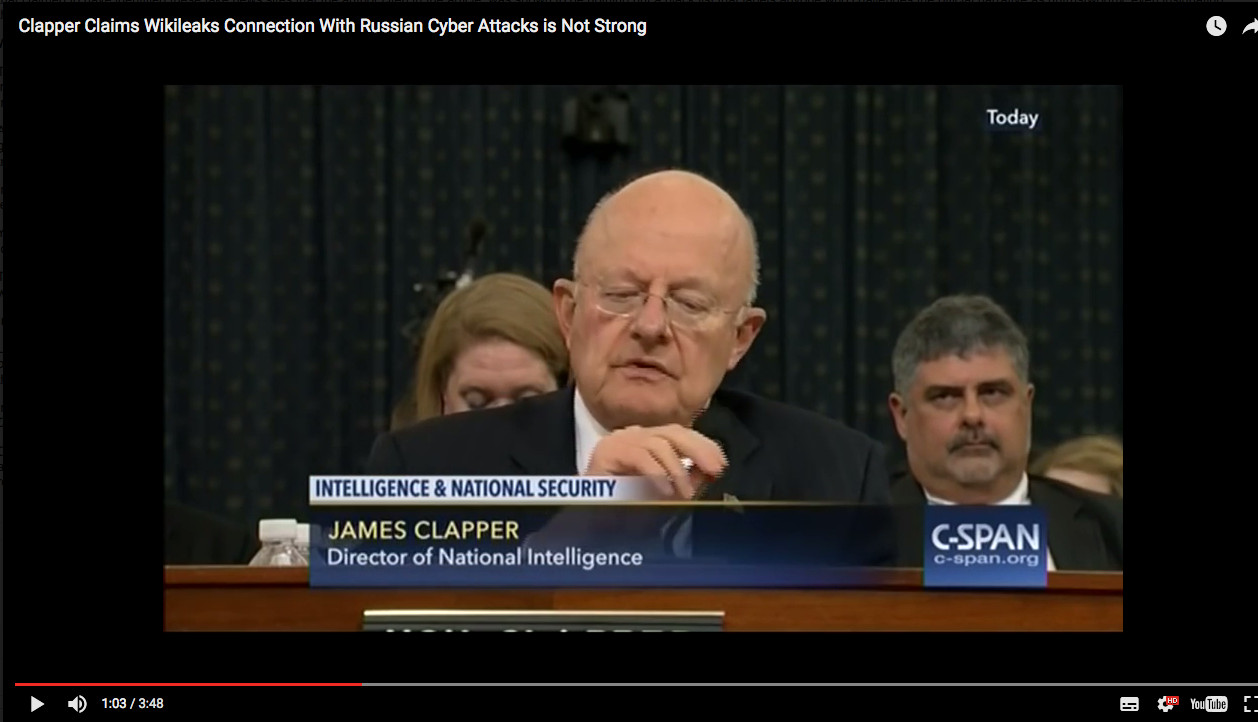 By Nozomi Hayase, Ph.D. Member of The Indicter Editorial Board. After the Electoral College vote, the Trump presidency is now official. As denial and blame games continue, this was not a ‘foreign government coup d’état’, clarified by U.S. Intelligence Chief James Clapper, noting that agencies lacked evidence for WikiLeaks’ connection with alleged Russian cyber-attacks. The […]

After the Electoral College vote, the Trump presidency is now official. As denial and blame games continue, this was not a ‘foreign government coup d’état’, clarified by U.S. Intelligence Chief James Clapper, noting that agencies lacked evidence for WikiLeaks’ connection with alleged Russian cyber-attacks.

The truth is, democracy in America has been rotten to the core for decades. It is meddled with by corporate lobbyists, Big Pharma, Big Oil and Wall Street –those who are addicted to money and power. American democracy is hollowed out, veiled with a loud media echo chamber, bringing feigned solidity to its emptiness. Out of this vacuum emerges a madness for power. U.S. politics is a contest of those who are driven by insatiable hunger – the most callous, cunning and manipulative people in society.

In this system, only people who lack empathy and advance self-serving agendas without concerns for others can rise to the top. The results of this year’s presidential election may mean that this person who many saw as ‘unfit to be president’ was better suited to play this dirty game than his opponent, Hillary Clinton.

Donald Trump, a perceived outsider, seemed to appear out of nowhere. The former producer of the American game show The Apprentice sniffed the vulnerability of disfranchised Americans who are continually betrayed by the establishment. He then quickly moved in for the kill, turning the electoral arena into a new Reality TV show.

With social media as a hunting ground, this new Republican contender made direct connection with his audience, pouring out charm and grooming them with fake promises. By deploying words as weapons of control, he managed to garner favorable reactions from his followers. His language cast a magic spell where contradictory remarks and lies bypassed critical examination. Emotions triumphed over reason and under the grip of irrational logic, facts no longer seemed to matter. With a chameleon-like ability to shape-shift and say whatever voters wanted to hear, he was able to create a mirage and ensnare the populace into a grandiose fantasy.

What was the press, a supposed watchdog of power doing during Trump’s uncanny rise in popularity? Mainstream media did nothing to prevent it and instead facilitated this process. His bombastic comments hit jackpot high ratings in the corporate media and rhetoric not bound by facts was not only tolerated, but actively promoted with their shortsighted mentality of profit at any cost.

Emancipating Power of the Internet

This same corporate media also buried a few important facts regarding the 2016 U.S. presidential election. This year’s election was an unprecedented phenomenon. This is not only because the lesser evil game was fought between two of the historically most disliked candidates, but this also had its own significance unique to elections in the Internet era.

While the Internet is now in many ways subverted to create mass surveillance and censorship, it also unleashed the potential for emancipation. As much as Trump’s mobilization was made possible by his use of social media, Bernie Sander’s campaign was also built on the democratizing force unleashed on the Net. With independent campaign funding, this virtually unknown senator from Vermont successfully sparked the idea of socialism and raised issues of Wall Street corruption, economic injustice and poverty at a national level. Sander’s largest support came from millennials. It was these natives of the Internet, through their grassroots organizing that galvanized his political revolution.

WikiLeaks, the world’s first global 4th estate, which operates outside of any government, was birthed on the Internet. WikiLeaks has shown how elections in the existence of a truly free press will never be the same as before. U.S. politics sponsored by corporate masters creates a milieu of deception, lies and fraud and is fraught with corruption. These power driven politicians can only thrive in secrecy. When their actions are exposed, like Hillary’s highly paid Goldman Sachs speeches, crafted public images that suck the masses into their illusions of grandeur tend to shatter. Contrary to hysterical rants of ‘Russia hacked the election!’, the defeat of the Clinton dynasty was a testimony to the power of transparency that has risen from the Internet.

Democrats seem to be disconnected with this new reality of the Internet age. Even worse, they appeared to be adversaries to it. This was shown in their reaction to the corruption revealed in the DNC email database and Trump’s winning of the election.

On the second day of the Democratic National Convention, hundreds of Sanders delegates who learned about DNC’s rigging of the primary walked out in protest. Chanting “This is what Democracy looks like!”, they vowed not to go with Hillary.

Revelations of the Podesta emails opened up an opportunity for real democracy. In that moment, Sanders had the masses behind him. With social media as a democratizing tool, along with WikiLeaks authenticated documents, he had power to truly challenge the establishment and revolutionize the nation. But then Sanders turned away, urging his supporters to nominate Hillary and sided with the deeply corrupt Democratic Party. His failure to seize this historical moment helped throw the election to Trump, who the Clinton campaign had portrayed as a ‘pied piper candidate’.

After all this came the Fake News explosion. Some established liberal media, freaked out by the country quickly turning red in this Republican takeover, created a new red scare. They blamed the loss of Clinton on anyone but themselves. On November 24th, an article in The Washington Post made wild accusations that Russia was engaging in propaganda during the election to spread ‘fake news’ in favor of Trump. Soon after the publication of the article, The Intercept and Matt Taibbi of Rolling Stone quickly denounced and challenged its claim. In the end, this fake news article was debunked, with Wapo issuing a correction. The anonymous site that claimed to have identified these fake news sites that the author cited in the article, was shown to be nothing but a black list that labels anyone who challenges the official narrative as untrustworthy, even insinuating them to be Russian agents, spies or traitors.

The election is over and hope is fading to stop the rise of demagoguery. The president elect began recruiting his rich buddies into his cabinet. Recently, he convened a group of Silicon Valley tech leaders to invite them into his new ‘construction project to rebuild America’. On January, 20 2017, Trump will be sworn in with the Oath of Office. The White House will become his new executive boardroom. With this United States Incorporated, the Constitution could be slowly shredded off from his business contract. This was shown in the president elect’s proposal on Twitter to give jail time or loss of citizenship for burning the American flag.

As this void of American democracy is being filled with more blatant patronage networks, new insurgencies of civic power are already here. During this year’s election, this force came to the forefront. WikiLeaks was a game changer. With the creative use of technology, they built a robust network that is censorship resistant, making it possible for the organization to be free from this rigged game of state and corporations, allowing it to truly serve the interests of the people.

In its 10 years of existence, the organization has gained credibility around the world with a perfect record of authentication of documents. With rigorous scientific journalism that publishes full and verifiable archives, they let truth be discovered through each individual’s participation in its process.

Years ago in 2007, it was Kenyans who learned from WikiLeaks release of the Kroll report about the corruption of their government and they were able to change the outcome of their election. Then in 2009, people in Iceland were empowered with WikiLeaks documents that revealed the country’s largest bank’s moral bankruptcy. 2016 was American’s turn.

The whistleblowing site, by means of information liberation, gave American voters an opportunity to revive the ghost of democracy. Despite mainstream media’s smearing of the organization, the significance of their work was acknowledged by Americans with public opinion polls showing their strong approval of the Podesta leaks.

In Their Nothingness, We Find the All

Lost opportunity in the electoral arena can be brought into a larger battle. Just as the power of the Internet can be used by the oligarchic class to corral the masses, it can also be used to empower the people, through its open network. Whatever the outcome of the election, WikiLeaks has already shown the power of unfiltered information and a glimpse of what informed citizens can do. When the liberating force of a free net is claimed by the people to create movements across borders, linking diverse struggles together, it can give all a chance to make real changes.

In the story of Faust, Goethe wrote about a universal man following his thirst for knowledge. In this journey, Dr. Faust meets Mephisto (the devil) who tried to trick and tempt him to come under his control. In the scene A Dark Gallery, Faust told Mephisto, “In your Nothingness I hope to find my All.” He then took the key and entered into this mysterious unknown.

Our quest for democracy asks us courage to enter into the realm of Nothingness. We no longer want to believe; we want to know. We no longer blindly accept a world conceived by a few elites. Now, in this chaos and abyss we are descending into, we may be able to find the real source of our own legitimacy. With knowledge that springs from deep within, we are able to penetrate the deception of those who seek to control us and recognize their emptiness. In their nothingness, we can find the creative power that has always been there, a power that can bring life back to this phantom of democracy.