This is the second article published in The Indicter that looks at how Julian Assange, founder of Wikileaks, journalist, publisher, nominee of the Nobel Peace prize and winner of multiple awards for journalism and human rights, was held in effective solitary confinement for several months while in the healthcare unit of high security Belmarsh prison between April 2019 and January 2020.

Since the publication of How British Authorities Circumvent the Treaty against Torture – Revelations from Assange’s Extradition Hearing, answers received from the prison authorities (HMPPS) to a Freedom of Information (FOI) request provide further indication that the treatment of Assange while in the healthcare unit was unlawful.

An expert medical witness named Dr Nigel Blackwood testified at Assange’s extradition hearing in September that the head of Belmarsh healthcare, Dr Rachel Daly, told him that Assange had been isolated in the healthcare unit because a video of him had been released by another prisoner.

However, despite this it was shown that there was a serious condition relating to mental health for which Assange’s relocation was recommended.  Once in the healthcare unit it appears Assange was informed that he was being kept in healthcare because of the video..

Witnesses visiting Assange over that period reported that he was subjected to a regime of virtual lockdown;  he was allowed no association – corridors were cleared when he was escorted anywhere in the prison. The UN Rapporteur on Torture, Nils Melzer, warned that Assange’s isolation amounted to solitary confinement.  The following is an excerpt from section 5 of Melzer’s statement issued to the British authorities in October last year.  We should consider September’s court hearing testimonies by medical witnesses regarding Assange’s isolation in light of Melzer’s statement – that Assange was being subjected to a regime of oppressive isolation in the healthcare unit that could not be explained:

According to reliable information made available to me, since his transfer to the health care unit, Mr. Assange’s state of health has further deteriorated and has recently entered a down-ward spiral which may well put his life in danger. Although Mr. Assange has served his sentence for bail violation and is now detained exclusively in relation to the US extradition request pending against him, he is reportedly held under oppressive conditions of isolation involving at least 22 hours per day in a single occupancy cell at the prison’s health care unit. His isolation is only interrupted by daily walks of 45 minutes, church services, as well as meetings with his lawyers and social visits. He is not allowed to socialize with other inmates and, when circulating in the prison, corridors are cleared and all other inmates locked in their cells. Contrary to assurances given to me by the prison administration during my visit, and contrary to the general population of the prison, Mr. Assange reportedly still is not allowed to work or to go to the gym, where he could socialize with other inmates. Moreover, Mr. Assange’s correspondence and contacts with visitors reportedly remain under close surveillance. Despite the obvious inappropriateness of such harsh and discriminatory treatment for a non-violent inmate held solely in relation to a pending extradition procedure, no adequate explanations appear to be given by the prison administration, and no alternative measures, such as house arrest, or his re-integration in the general population, seem to be envisaged.

Based on the information made available to me, the detention regime currently imposed on Mr. Assange appears to be unnecessary, disproportionate, and discriminatory and to perpetuate his exposure to psychological torture or other cruel, inhuman or degrading treatment or punishment. I am very concerned that, if the UK does not take urgent remedial measures to alleviate Mr. Assange’s situation, his health may soon reach a critical stage, including the risk of death.5

A lack of legitimacy, transparency and accountability

It was made clear by doctors during the hearing that Assange’s mental health deteriorated significantly during this deliberate isolation (supporting the report of the UN Rapporteur) to the point that he experienced auditory hallucinations and repeated suicidal urges. Eminent experts have testified to the fact isolation exacerbated his condition. This deterioration was also documented by the healthcare professionals who were charged with his care.   Despite this, they did not intervene to move him out of isolation.

What happened to prison safeguards and procedures relating to isolation?

The Independent Monitoring Board (IMB) explains why it becomes involved when a prisoner is removed from association:

Removal from association is an administrative measure, not a punishment. This explains why there is no quasi-legal process (as for adjudications) and no appeal possible. There is no outside scrutiny of the use of R45/49/40 apart from that by the IMB or HMIP during an inspection. It is therefore important for Board members to speak to those held under these rules and attend the Reviews held in prisons when possible to check that the segregation decision is fair, that due process is followed, and that the total time spent segregated is not excessive.8

In recent correspondence the IMB stated that it has unfettered access to prisoners.

However, in order for the IMB to be able to carry out its role, it relies on prison officials to fulfil their remit under the memorandum of understanding.   In a response to an FOI last month the IMB advised that it is not notified of prisoners removed from association other than those placed in the segregation unit in Belmarsh prison, indicating that it played no role in the oversight of Assange’s prolonged isolation.  Given this arbitrary treatment by prison officials, it is reasonable to ask whether the IMB was notified of Assange’s mental torment while isolated in the healthcare unit, which led to his mounting suicidal urges requiring suicide watch over a long period.  If the prison authorities failed to notify the IMB, this would represent a further breach of the memorandum of understanding (18a).

There are two reasons under prison rule 45 why a prisoner can be removed from association.  One of those relates to protection – if a prisoner is at risk amongst the general population. The other relates to good order and discipline (GOOD).

The Prison Reform Trust explains that GOOD is applied when the governor or operational manager has reasonable grounds to believe that the behaviour of a prisoner will be too disruptive to manage on the wing.  Note here this relates to the behaviour of the prisoner being removed from association. We remember that Dr Daly advised Dr Blackwood that Assange was isolated in the healthcare unit because another prisoner had taken a video of him.  Blackwood had said prison officials were embarrassed over this.  We should also remember that despite this account being given by Dr Daly, Assange was put there for a medical condition, indicating a lack of transparency, both in the initial reason for his going there and for his prolonged isolation from other prisoners while kept there.

In their recent answers to an FOI, the prison authorities state that 115 prisoners were removed from association between May 2019 and 2020 and they were all placed either in the segregation unit or in the high security unit (HSE) at Belmarsh.  Rule 45 was applied in all cases. They also state that unless a prisoner has received “loss of association” as part of an adjudication award, they cannot be isolated without being placed on Rule 45 Good Order and Discipline.  There is therefore strong evidence to indicate that the prison authorities behaved unlawfully in the way they isolated Assange in the healthcare unit.  It is also important to ask why the health authorities did not intervene to stop this, particularly as Assange’s condition was seen to deteriorate during his isolation. 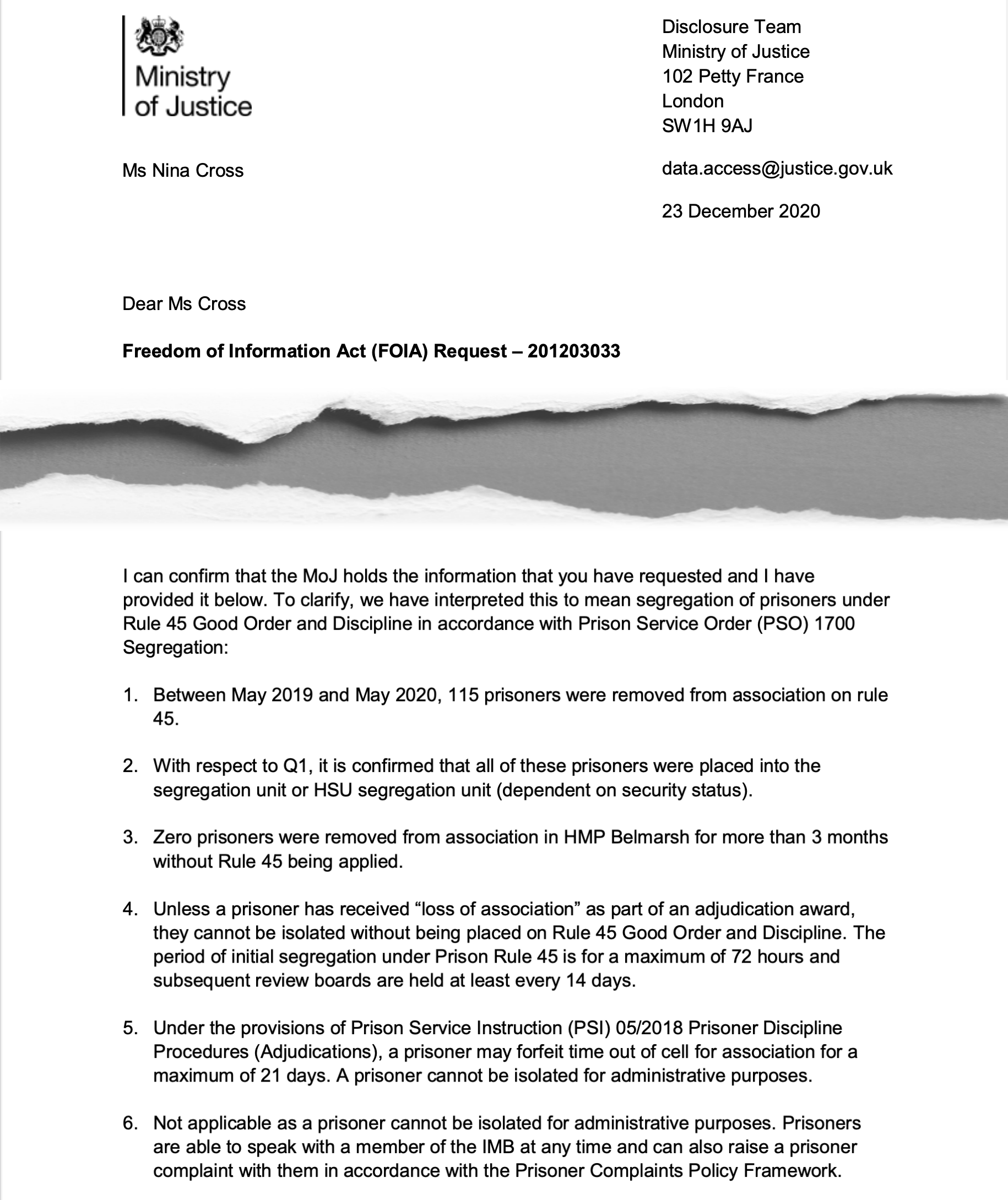 Assange was removed from the healthcare unit in January this year.  He was removed due to the campaigning of inmates who petitioned the governor on three occasions.  It was not the result of any intervention by the authorities, either prison or health, or, it would appear, of the IMB most likely for reasons given.

There are now 11 days until Magistrate Vanessa Baraitser rules on Assange’s extradition.  The continuous abusive treatment by the British authorities is condemned by UN bodies, global networks of politicians and civil society, and countless individuals across the world that together form a mass movement of support for Assange. The British authorities have relied on state machinery, civil service, and tax funded public services for their complicity in abuse.  Together these have enabled the possibility of the death of Assange.  At each turn, for a decade, there have been irregularities, breaches of standards, exceptions, excesses, disproportion, lawfare –that piece by piece have built a platform from which an unprecedented violation of international law is now possible: the criminalisation of journalism and the slow murder of a principled journalist, a nominee of the Nobel Peace Prize, the holder of dozens of awards for his journalism and human rights.  This could not be possible without collusion.  Each irregularity,  breach, violation, each turning of a blind eye, – as the ones researched here – have brought Assange and us to this point.

Swedish Professors & Doctors for Human Rights (SWEDHR), calls on academics, professionals, publishers, journalists and the public to add their signature to the petition to the International Criminal Court crime against humanity: ICC Article 7 (1) (e) & 7 (1) (f)