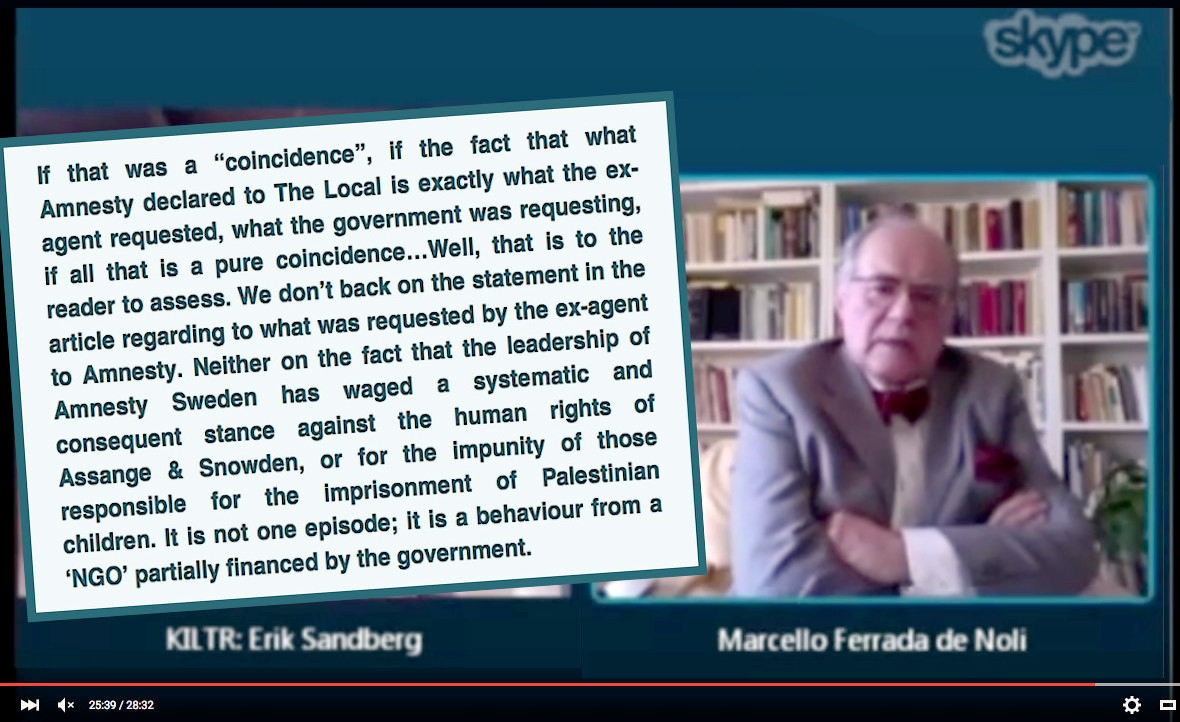 By Erik Sandberg and SWEDHR Staff Journalist Eric Sandberg, KILTR, Scotland, interviewed the Chairman of Swedish Doctors for Human Rights and Editor-in-Chief of The Indicter magazine, Professor Marcello Ferrada de Noli. The subject of the interview being the Swedish case vs Assange, and the debate with Amnesty Sweden that recently SWEDHR and The Indicter held. […]

By Erik Sandberg and SWEDHR Staff

Journalist Eric Sandberg, KILTR, Scotland, interviewed the Chairman of Swedish Doctors for Human Rights and Editor-in-Chief of The Indicter magazine, Professor Marcello Ferrada de Noli. The subject of the interview being the Swedish case vs Assange, and the debate with Amnesty Sweden that recently SWEDHR and The Indicter held. The interview was conducted from Scotland with Skype connection to Sweden on the 17 of March.

KILTR had prior the interview also asked Amnesty Sweden and the Swedish government for statements on The Indicter article-series. The government replied mailing a document containing the official statement of Sweden on the UNWGAD ruling ref. the arbitrary detention of Julian Assange. For its part, Amnesty sent a comment on the article in The Indicter.

In rebutting the position of the government and that of the Swedish prosecutors, the professor put forward the essential criticism about the management of the case, which he characterized as having a political content. At this same occasion, Ferrada de Noli rebutted thoroughly the terms against The Indicter. He restated that the SWEDHR criticism was purely based on facts and that both the statement of Amnesty Sweden (16 April) and the comment sent to KILTR avoided to met the real criticism raised by the article series in the Indicter.

IndependenceLive also uploaded in YouTube the interview in its original, live-version; but it is given here in a shorter edition containing only the main statements.

SWEDHR Research and Reports publishes here a summary with the content of the replies to principal questions in the interview. This summary reflects the main contents of the statements in the interview and it should not be tenable as a transcription. The interview  can be watched here:

Question: Do you think that the Swedish prosecutors have failed the women in this case?

Well, insofar the Swedish prosecutors have failed in carry forward the investigation of this case; naturally they have failed the women too. But above all, they have failed Sweden and its international prestige as a decent country where the rule of law has been considered being paramount.

The Swedish prosecutor in the case had consequently missed opportunity after opportunity to implement the interrogation of Assange.

Firstly, while he was still in Swedish territory; he was not interrogated then;

Second, when Mr Julian Assange himself approached in person the British police about the European Arresting Warrant issued by the Swedish prosecutor, he was held a full week, incommunicado. There could have the prosecutor have interrogated Assange, unstoppable. What problem she could have had to do so? I mean, the prosecutor had Assange there, in isolation cell, and heavily guarded in a secure imprisonment facility; she had him in, sort to say, trapped in an “inescapable” situation. Why the prosecutor did not carry on her work?

Lastly, as associate professor Brita Sundberg-Weitman has mentioned recently, why the prosecutor did not interrogate Assange in any of the 550 days that passed between the above and the opportunity he sought political asylum in the Ecuador embassy?

Would Mr. Assange really receive a fair trial in Sweden if he was to travel there?

In the first place there is no indication that a trial would ever exist against Julian Assange in Sweden based on the allegations hat the media has put forward. And do observe that it is the media that – in the best of cases – insists on “accusations of rape”; while some others outlets in the Western media persist in repeating the disinformation, “Assange is charged” for this and that.

Secondly, it seems to be a consensus in Sweden, including in juridical circles, that the “case against Assange” – still under prosecutor’s investigation after over five years – will never make it to court because it lacks of any substantial ground. For example, that was the message delivered by the former Minister of Justice Mr Thomas Bodström in declarations to the Swedish TV after the UNWGAD ruling became known. He also meant that Swedish courts are not under UN jurisdiction.

With regard to your article dated 6th March in the Indicter, that a Former paid agent of Swedish Security Police dictated Amnesty Sweden’s stance against Assange the response I received from Amnesty Sweden was: “that the claim in the article is complete nonsense and without any substance. No individual external to Amnesty International have had any influence on our policy whatsoever – the accusations made entirely misrepresent our policy-making process.”

It is true the article’s tittle referred that a former paid agent of Swedish Security services dictated Amnesty Sweden’s about their stance against Assange. But, to the best of my knowledge, to dictate means, in English, to give instructions, or to request. And that it was exactly what Mr Martin Fredriksson – the ex-informant paid by the Security services did in his communication wit h Amnesty. That is all what we said. Then, we also remarked in the article that the declarations made the day after by the representative of Amnesty Sweden to the news outlet The Local were in consistence with both what the ex-agent has requested in his email to Amnesty, and the position held by the Foreign Minister Carl Bildt some weeks ago that occasion, on the same issue. If that was a “coincidence”, if the fact that what Amnesty said is exactly what the agent requested, what the government was requesting, if all that is a pure coincidence…Well that is to reader to assess. We don’t back on the statement on the article regarding to what was requested by the ex-agent to Amnesty.

The central issue is 1) that the position of Amnesty Sweden, in our opinion, infringes the human rights of the arbitrarily detained Julian Assange for the full implementation of his political asylum. 2) A central issue is also that the Swedish section of Amnesty International is in frank contravention with the parent organization AI based in London.

And let me add something here. Please notice that in that that particular article I am signing on behalf of Swedish Doctors for Human Rights. Well, most members in this organization, particularly the board of directors are professors or doctors in a variety of fields. We therefore share a common, basic methodological approach: we do not judge after the only one time occurrence of only one symptom. Any person, or any organization may once have incur a less fortunate statement, once. But this is not an assessment based on one episode. As we said in our profession, is a series of similar episodes what it constitutes behaviour.

The episode that Amnesty now is trying to explain occurred in September 2012, but in 2014 they repeat the same hostile stance against the human rights of Assange, and, by the way, also against Edward Snowden. Amnesty Sweden says, you told me here now, that we are misrepresenting their policy-making process. We are not. That happened in the middle of their policy-making process, in their annual conference. The leadership of Amnesty Sweden opposed a proposition from the ranks to initiate a human activity on behalf of Edward Snowden and Julisn Assange. An now again, in this statement they produced on the 16 of March, they repeat the same position, which is the government’s positions, that the prosecutor has to carry on with this remarkable so-called investigation against Mr Assange – in spite that the UN WGAD has clearly ruled that Mr Assange shall be released – an that he is even entitled to compensation from Sweden.

How could Amnesty Sweden possibly deny their support to the Swedish government official stances in the case Assange? They do this no matter the high embarrassment that it entails. For instance, in their last statement of 16 March they say “Sweden is a state under the rule of law who respects its international obligations.” And they say that precisely after Sweden has received substantial international criticism for refusing to respect the UNGWAD ruling on Assange. They say “Sweden respects its international obligations”, but everybody knows at this stage that those decisions taken by the UN body were based on international conventions signed by Sweden, for instance the International Declarations of Human Rights or the International Covenant on Civil & Political Rights.

The statement of Amnesty Sweden of 16 March also exhibits, as we said, a central contradiction of terms: On the one hand hopes that the UK and Swedish governments would “find the way” to comply with the UNWGAD ruling on Assange. But this ruling calls unequivocally for the release of Mr Julian Assange, the ending of the applicability in this case of the EAW issued by the Swedish prosecutor. Well, The statement of Amnesty Sweden of March 2016 insists on the same stance of the one in September 2012: that the prosecutor’s investigation against Assange should be completed. But this means that such an arrest, or similar, would continue to be under enforcement. And that is the opposite of what the UNWGAD is saying in their conclusion. Where is Assange’s freedom here?