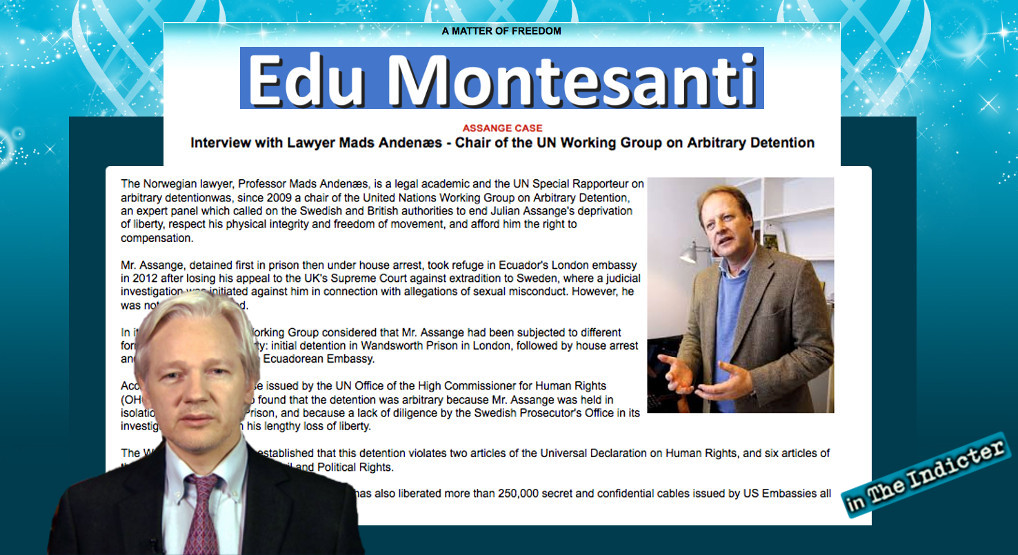 The Norwegian lawyer, Professor Mads Andenæs, is a legal academic and the UN Special Rapporteur on arbitrary detention was, since 2009 a chair of the United Nations Working Group on Arbitrary Detention, an expert panel which called on the Swedish and British authorities to end Julian Assange’s deprivation of liberty, respect his physical integrity and freedom of movement, and afford him the right to compensation.

Mr. Assange, detained first in prison then under house arrest, took refuge in Ecuador’s London embassy in 2012 after losing his appeal to the UK’s Supreme Court against extradition to Sweden, where a judicial investigation was initiated against him in connection with allegations of sexual misconduct. However, he was not formally charged.

In its official opinion, the Working Group considered that Mr. Assange had been subjected to different forms of deprivation of liberty: initial detention in Wandsworth Prison in London, followed by house arrest and then confinement at the Ecuadorean Embassy.

According to a press release issued by the UN Office of the High Commissioner for Human Rights (OHCHR), the experts also found that the detention was arbitrary because Mr. Assange was held in isolation at Wandsworth Prison, and because a lack of diligence by the Swedish Prosecutor’s Office in its investigations resulted in his lengthy loss of liberty.

The Working Group further established that this detention violates two articles of the Universal Declaration on Human Rights, and six articles of the International Covenant on Civil and Political Rights.

Mr. Assange, founder and editor of WikiLeaks, has also liberated more than 250,000 secret and confidential cables issued by US Embassies all over the world.

In this exclusive interview, Professor Andenæs comments his participation at the UN Working Group, why the panel defends freedom for Mr. Assange presenting the legal implications regarding to the case.

“There are several procedural mistakes committed by the authorities”, says the Professor, who also comments his view on the play the WikiLeaks founder plays in international politics, the importance on world solidarity with him, and how the lawyer sees the recent WikiLeaks revelations: US spying on UN Secretary General Ban Ki-monn and German Chancellor Angela Merkel.

Edu Montesanti: Dear Professor Mads Andenæs, thank you for granting this interview. Would you please tell us about your job at Working Group on Arbitrary Detention (WGAD), during the initial part of Julian Assange case before the United Nations (UN)?

Prof. Mads Andenæs: I was chair of the UN Working Group when the complaint was received, and the exchanges between the UN and the parties took place. I did not take part in the discussions of the Working Group leading up to the opinion in the Assange case. My term ran out in July 2015, and the decision was published in February 2016.

Edu Montesanti: Why do you advocate for Mr. Assange?

Prof. Mads Andenæs: I have spoken out in support of the opinion of the UN Working Group. Mr. Assange is in arbitrary detention and the UK and Sweden should abide by the UN ruling against them and take the steps that are necessary to bring his detention to an end.

Edu Montesanti: Please, Professor, specify the accusations against Julian Assange, and who accuses him.

Prof. Mads Andenæs: The current case about the extradition to Sweden concerns allegations of sexual misconduct. Of course, the allegations relating to Wikileaks involves a strong interest of the security apparatus in many countries.

The fear is that the latter is allowed to influence the process and outcomes in the first case.

Edu Montesanti: How do you see Washington’s allegation that Assange has threatened US security?

Prof. Mads Andenæs: That are allegations that usually are fielded against use of the right to provide information and the freedom of speech. There is every reason to be sceptical to such assertions.

Edu Montesanti: How do you see the UN’ decision to free Mr. Assange?

The UN WGAD clearly accepted the argument that Assange’s conditions are not ‘self-imposed’, that is, if he stepped into the street, he would be arrested. There was also a ‘substantial failure’ of the authorities ‘to exercise due diligence’ in the ‘performance of criminal administration’ (par. 98).

The line between a ‘restriction of liberty’ and ‘deprivation of liberty’ is finely drawn in European human rights jurisprudence. Liberty deprivation doesn’t consist only in the easily recognizable conditions of state detention. You must consider the length of time that Assange has remained in the Ecuadorian embassy, and his ongoing circumstances.

Liberty must be capable of being realized in actuality. Where the exercise of such liberty would have significantly coercive results, such as further deprivations of liberty or putting other rights at risk, this cannot be described as liberty in practice. The fact that Assange is resisting arrest doesn’t resolve this issue, as this would be to argue that liberty is a right contingent on his co-operation.

Assange is not free to leave he Ecuadorian Embassy of his own will. He fears extradition to the US and prosecution for his involvement in Wikileaks. The Swedish authorities have refused to provide assurances of non-refoulment which respond to this fear. Assange’s deprivation is ‘arbitrary’. One ground is that it is disproportionate.

There are other, less restrictive ways of proceeding. Before issuing a EAW, the Swedish authorities could have followed the normal practice of interviewing Assange in a British police interview room.

After Assange took residence in the Ecuadorian embassy they could have relied on ‘mutual assistance’ protocols, questioned Assange by video link, and given him the chance to respond to the allegations against him.

Prof. Mads Andenæs: The UN International Covenant on Civil and Political Rights and the UN Universal Declaration on Human Rights prohibit arbitrary deprivations of liberty in Articles 9. That is something more than a “restriction on liberty”. It includes house arrest.

Edu Montesanti: How do you evaluate the United Kingdom (UK) and Sweden’s decision of not respecting UN’ decision?

Prof. Mads Andenæs: Rulings by the UN WGAD are not always followed by states, but rarely do they result in such personal attacks as made by UK politicians after the Assange opinion.

I know that the words used by the Foreign Secretary and the Prime Minister were not the ones provided by the the civil servants advising on human rights and international law. The UK politicians aimed at weakening the authority of the UN body for short term opportunistic gain.

I fear that these politicians have weakened the international community’s possibility to protect some of the most vulnerable victims of human rights violations.

Their words have circulated among the states responsible for the worst human rights violations. The words of these UK politicians will cost life and human suffering.

The UK may lobby for some support when the matter is reported to the UN Human Rights Council, but the UK will certainly be criticised by other states for its response, and clearly deserve that.

Edu Montesanti: Please, Professor Andenæs, comment the current status of the ‘preliminary’ investigation in Sweden, and US ‘pending prosecution’ against WikiLeaks.

Prof. Mads Andenæs: Also those who are convinced that Mr. Assange is guilty of rape, whether or not you think he is a self-publicist deliberately resisting arrest (and I do not), the fact remains that the authorities could use less restrictive means without compromising the initial investigation into the allegations regarding his sexual conduct in Sweden.

It is timely to remind ourselves that Assange has not been found guilty of rape: at this stage the prosecutor and courts in Sweden has held that there are probable grounds. Professor Andrew Ashworth, Oxford, stated in an Expert Opinion from 2011 that Assange’s team has made reference to, that “I do not consider that any of the incidents alleged in box of the EAW (that are the allegations cited in the arrest warrant) is sufficient of itself to constitute any offence under English law”.

The Swedish Supreme Court Vice President has reminded us that the accused is presumed innocent until found guilty (video below), and that when there are contradictory statements, it is for the courts to decide whether there the requirements for a conviction are satisfied.

Click on image above for the video documenting the lecture held at Adelaide University by Mr Stefan Lindskog, member of Sweden’s Supreme Court . An analysis of Justice Lindskog’s position at the public address is found at Government-sponsored presentation of Supreme Court judge in Australia increased doubts on Swedish legal system, published by The Profesors’ Blog. / Editor’s note

The Swedish courts, also the majority in the Swedish Supreme Court, the Vice President was not on that panel, expressed that the arrest warrant even if it could not be executed against Assange, limited his liberty in a way that was relevant to question whether it remains proportional. The majority noted with approval that steps were now taken to interview Assange in London.

Over time, the Swedish Supreme Court may well grow sympathetic to the dissenting judgment of Justice Svante Johansson, that the conditions of the investigation are now disproportionate (a view presented by Anne Ramberg, head of Sweden’s Bar Association and Judge Charlotte Edvardsson, the reporting staff judge in the Supreme Court, in her (public) proposal to the court in the case).

Certainly, Former Legal Counsel to the United Nations and Legal Adviser to the Swedish Ministry of Foreign Affairs, Hans Corell, has stated that he ‘does not understand why the prosecutor had not questioned Julian Assange during all the years he has been at the Ecuadorian Embassy’.

Reasonable and judicial minds have differed on many of these issues. No doubt they have been coloured by views on the integrity of Assange himself. But human rights are not meant to favour the popular amongst us; they are meant to favour us all.

Edu Montesanti: Why do you think the UK is acting so strongly according to US interests in this case?

Prof. Mads Andenæs: Wikileaks has made very important contributions to our knowledge about the diplomatic and political process. It has changed my perception of major events and institutions. Wikileaks makes it much more difficult to manipulate us.

The so-called intelligence community base itself on working methods that are cloaked in secrecy. There are strong institutional forces that want to put an end to Mr. Assange’s activities. That go for very many countries.

Edu Montesanti: How do you see Ecuador government regarding Mr. Assange, and the importance of world solidarity with him not only by other governments, but also by activists and civilians in general, Professor Andenæs?

Prof. Mads Andenæs: Ecuador’s government has made a very important contribution to the protection of an international public sphere, and to the protection of freedom of information, freedom of expression and accountability for human rights violations. The expressions of solidarity for him not only by other governments, but also by activists and others around the world arre very important.

Prof. Mads Andenæs: I had expected a more muscular defence of the right to provide information and the freedom of speech. But media in all countries operate in a complex interaction with governments and take account of the state interest in different ways. In my view, in this case with too much respect for the perceived state interest.

Edu Montesanti: How do you evaluate recent WikiLeaks revelations of US spying on UN Secretary General Ban Ki-moon and German Chancellor Angela Merkel at a private climate change strategy meeting in Berlim, and the United Nations High Commissioner for Refugees (UNHCR)?