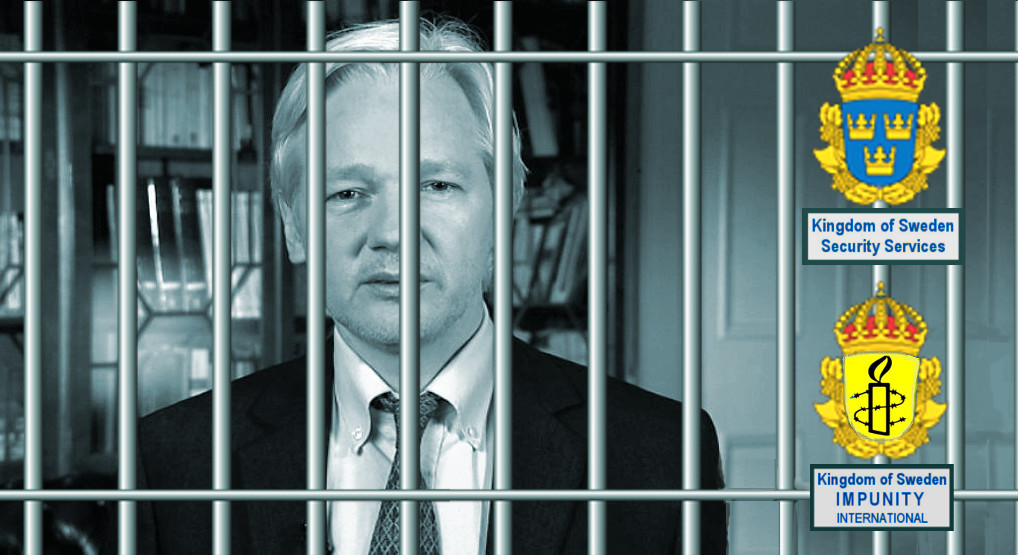 By Professor Marcello Ferrada de Noli, Chairman of Swedish Doctors for Human Rights, Dr Nozomi Hayase in representation of The Indicter Editorial Board, Professor A­nders Romelsjö, SWEDHR vice-chairman, and Dr Lena Oske in representation of SWEDHR’s Board of Directors. This material was first published in SWEDHR Research & Reports The Swedish section of Amnesty International […]

This material was first published in SWEDHR Research & Reports

The Swedish section of Amnesty International – a Swedish NGO partially financed by the Swedish government [1-3] – issued a statement 14 March 2016, restating their stance on the Assange case. In it, they assert, “Sweden is a constitutional state who respects its international obligations.” [4] It is an odd statement, considering that Sweden has just refused to respect the UNGWAD ruling on Mr Julian Assange, which is based on a variety of international conventions in which Sweden is a signatory state. [5]

The statement also exhibits a central contradiction of terms: On the one hand, it advises the Swedish and UK government to comply with the above-mentioned UNWGAD ruling – which calls for the release of Mr Julian Assange and the ending of the Swedish EAW against him, while on the other hand, their statement insists that the Swedish prosecutor’s investigation against Assange must continue and be completed. In other words, the arrest order would still persist. [6]

The statement starts by implicitly referring to an article that the chairman of the Swedish Doctors for Human Rights published in The Indicter on the 6th of March 2016 [6], denouncing a series of anomalies committed by the Swedish section of Amnesty International. These irregularities have consisted in stances deviating – or in blunt opposition to those by the parent organization, Amnesty International based in London. [7]

The Swedish section of Amnesty International does not stand behind the formulations of the organization [the parental organization Amnesty International based in London] about the issue of [non-extradition] guarantees. The Swedish section does not consider it is appropriate, neither possible, to call on the Swedish government to demand the issuing of guarantees that Assange will not be extradited to the U.S.”

Among the several inconsistencies exposed in our article in The Indicter, we emphasized the position that the Swedish section of Amnesty International (hereafter referred as Amnesty Sweden) took in 2012, which they still maintain, regarding the negation of guarantees against extradition to the U.S. that the parental organization Amnesty International advocated to the Swedish government on behalf of Mr Julian Assange. [8]

Our conclusive assessments in the above-mentioned article, which we stand behind fully, are as follows:

However, instead of addressing the fact-based criticism above, or the rest of issues exposed in our article, the Amnesty Sweden statement released 14 March 2016, [12] discredits the article in The Indicter as “pure nonsense”, and bases such an assertion by exclusively using a straw man fallacy: the only argument in the statement against our article refers to something we never said. Amnesty Sweden argues that their email reply to Martin Fredriksson was no different than replies given to “others” on the same issue. However, we never mentioned Amnesty Sweden’s email reply to Fredriksson. Besides, Amnesty Sweden failed to show who would the “others” have been that were “questioning” the same issue as Fredriksson.

“I do not understand how you shall have any credibility regarding the (Swedish) rule of law if you do not correct this.” [13] No interrogation mark here.

Whether Amnesty Sweden took the same stance dictated by Fredriksson by pure ‘coincidence’ of opinion, or by pure ‘coincidence’ with the official position of the Swedish government, or by their own conviction, is less relevant. That the government has been trying to influence on the case has been well established since long ago. [14] Here, the central issue is that the position Amnesty Sweden took on the non-extradition guarantees was not only unfair regarding the protection of Julian Assange’s human rights, but was also in direct contravention to the stance that Amnesty International, the parent organization has had and still has on this issue.

[5] Marcello Ferrada de Noli, UN Covenant on Civil & Political Rights says that the arresting of Mr Julian Assange can & should be put to an end. The Indicter, 15 December 2015.

Previously, Bild said during an interview in Belgrade:

Sweden has “independent judiciary, guaranteed by law,” and that “political authorities do not influence its work”

(More info at The Indicter Editorial Board)