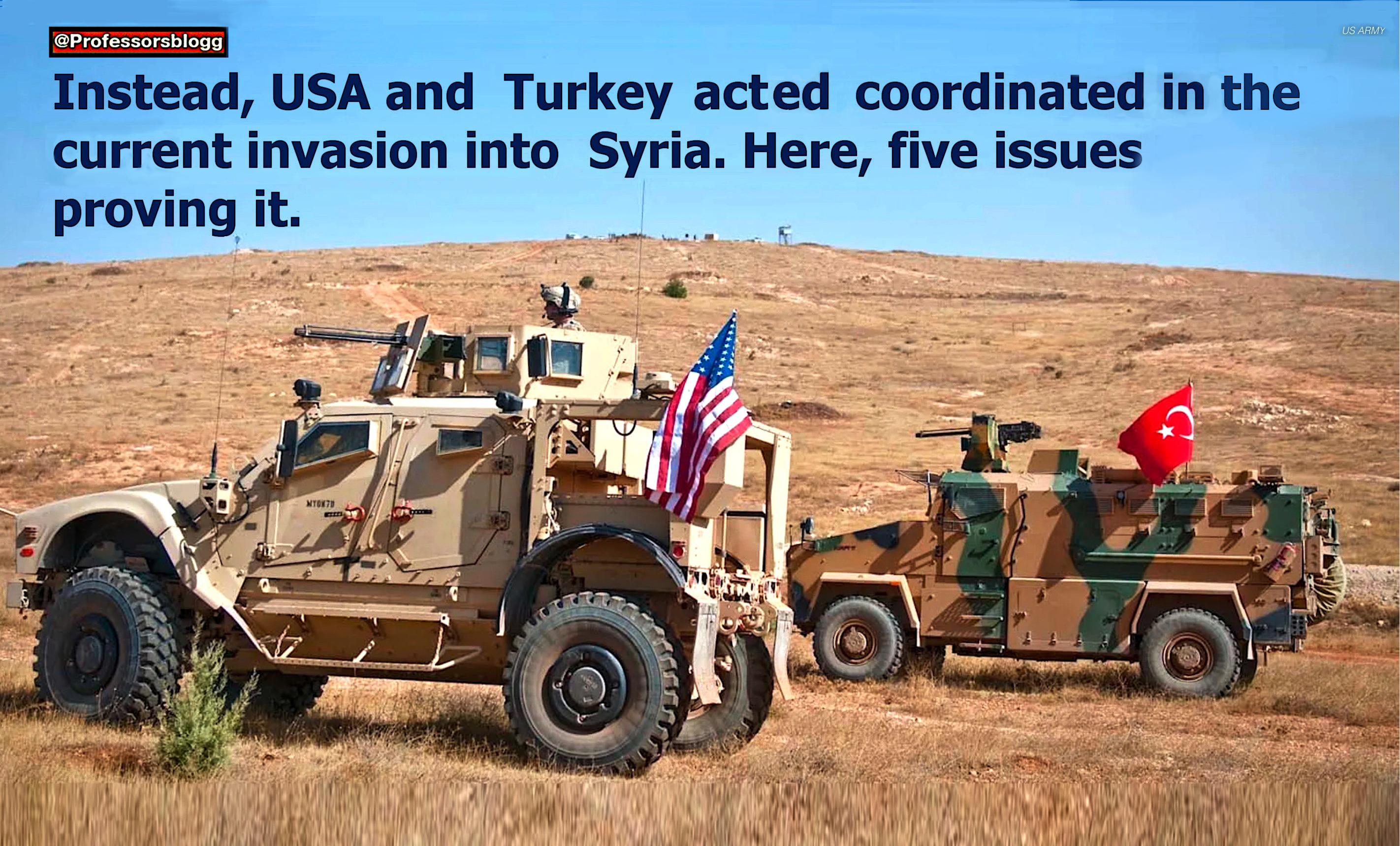 – While Trump’s claimed that “in no way have we abandoned the Kurds,” Turkish military bombed Kurd’s positions with help of Intelligence provided by the U.S. 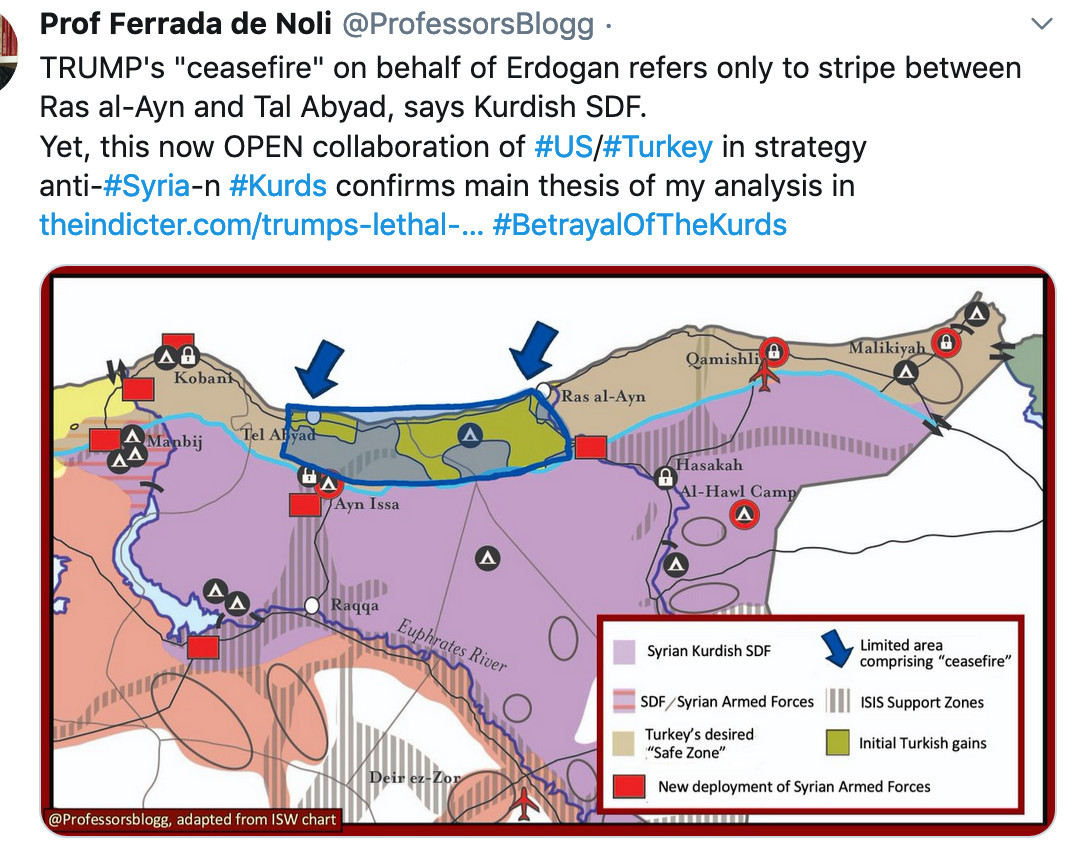 The main thesis in this material being that the invasion of NE Syria and its geopolitical and human-rights related sequelae, particularly concerning the Syrian Kurdish population, is the result of an ongoing cooperation between the governments of USA and Turkey. As I have put forward consistently in these columns and in a recent interview, all military forces from the US and EU countries shall pull-out from the region. They are there ilegitimate.

The territories that formed the Syrian Kurds’ autonomous regional administration “Rojava” in Northern Syria, were for the most recovered in their fierce fight against ISIS –at the price of eleven thousand Kurds lives.

One of the territories comprised in the Rojava (de facto) autonomous administration was the Afrin Canton. During the Ottoman rule, Afrin was called Kurdax. Syrian forces had left Afrin in the spring 2012. The Kurdish forces took over Afrin during the ensuing summer. 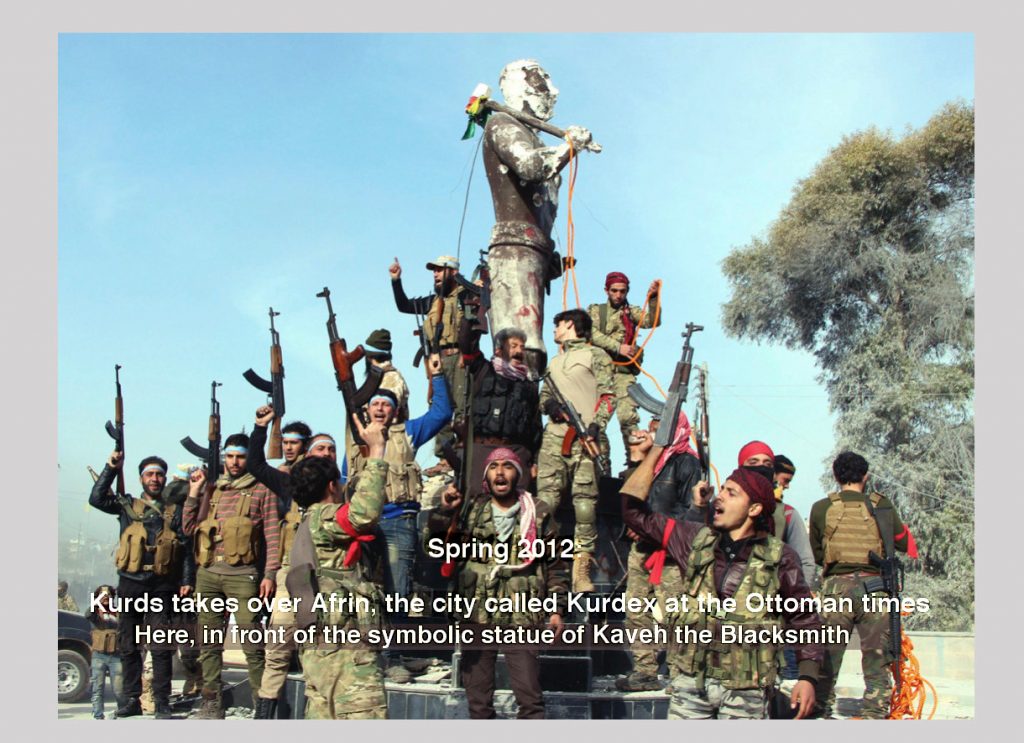 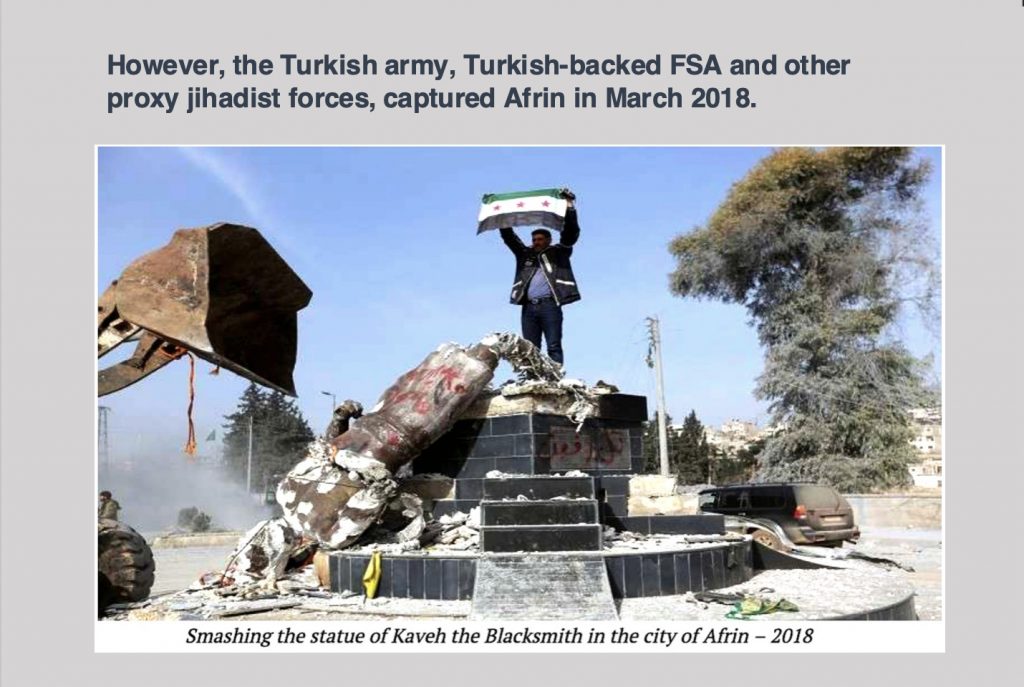 To this end, the Kurds constructed tunnels and defences along some border positions, that would obstacle a new Turkish invasion.

But in August 2019, amidst the border agreements discussed with Turkey, the Americans asked the Kurds to demolish those defences.

The Americans meant that the destruction of the fortifications was a) necessary to demonstrate good will to the Turks, b) a condition for the guarantee the Americans would continue providing support to the Kurds in brokering the agreements with the Turks.

Ensuing, the Syrian Kurds destroyed their own fortification system –in exchange of a “peace” expectation, as given to them by the U.S. officials.

However, as it has now been revealed, the truth is that by August 2019 the Americans knew very well about Turkey’s preparations for the imminent military assault into northern Syria.

Just prior to the launching of the military offensive, Trump announced the pullout of the American troops from Syria, signalling a green light for the Turkish invasion of Syria.

That was another deceptive message. No U.S. troops have been transported back from Syria, so far (13 October). Only 50 or so were displaced from a couple of posts to other units in the vicinity.

However, the announcement was instead to be read at that time, “No American troops stand in the way for the Turkish invasion”. 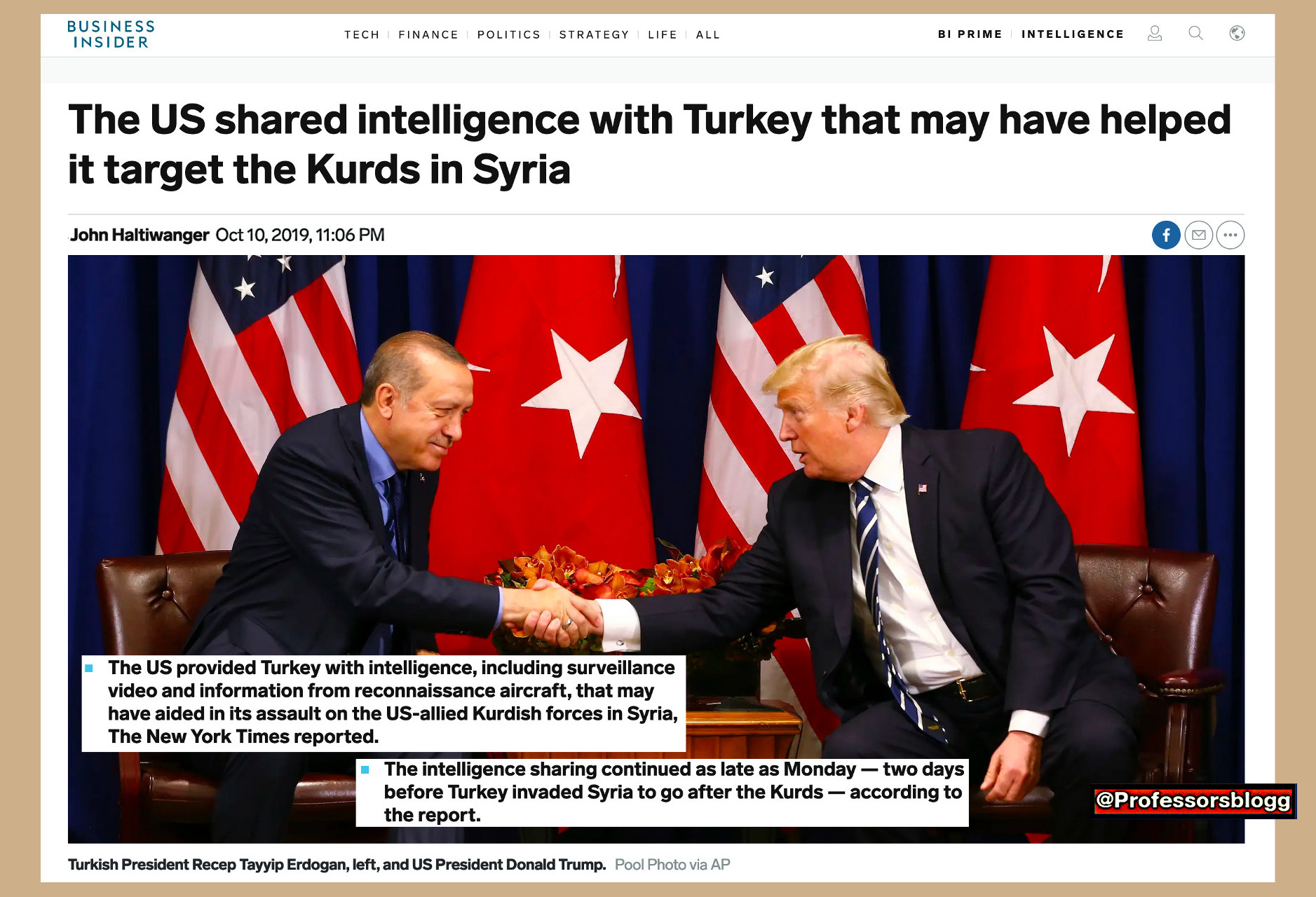 In spite of President Trump’s claim that “in no way have we abandoned the Kurds,” The New York Times has recently revealed that the U.S. has provided the Turkish military with Intelligence regarding the Kurds.

The United States was providing intelligence to Turkey until Monday that may have helped it target Kurdish forces. [New York Times, 9 Oct 2019]

As allies of the Kurdish forces in the ongoing combat operations in the zone (against ISIS), the Americans knew exactly about the position and strength of the Kurd combat units in northern Syria.

The Americans continued passing information to the Turkish military even until two days before the invasion started.

As a result, the Turkish military could easily identify and follow the position of the Kurds with the help of the information provided the Kurds’ own “combat allies” in the operational terrain –meaning, the Americans.

Two US officials told The Times that as Turkish military officials planned the assault over the past few weeks, they were provided with American surveillance video and information from reconnaissance aircraft. Information like this could prove useful in picking out targets for air strikes. [Business Insider, 10 Oct 2019]

Under international and domestic pressure, Trump promised to apply drastic economic sanctions against Turkey, if their invasion would turn out being “ugly”.

So did exactly the situation became, with multiple verified reports of war crimes, the shelling of civilian convoys, summary execution of prisoners and civilians, and the forced displacement of a quarter million of Kurds from their homes in the area. See video bellow:

Nevertheless, at the moment of this text, the Trump administration still has done nothing in concrete to implement efficacy of the punitive measures he “promised” to deliver.

And neither did the U.S. Congress, to this date.

And neither the European Union, for their part, regarding the announced stop in arms-exports to Turkey.

Do you remember the extensively reported “pullout” of U.S. troops from Syria?

And do you remember Trump saying that they would not intervene militarily in the disputes between Turks and Kurds, and, for that part, in any “endless” war in the region?

Well, today’s news report that U.S. forces tried to stop the reinforces brought by the Syrian Army to the beleaguered Kurds. [All quoted texts below from Daily Beast, retrieved 14 Oct 2019]

“The official Facebook page for the Russian Defense Ministry’s Hmeimim base issued a stern warning to Turkey, acknowledging that Russian forces would enter the city, stating, ‘We hope the Turkish side and it’s allied forces will restrain themselves and not behave recklessly in entering an open war with government troops.’” 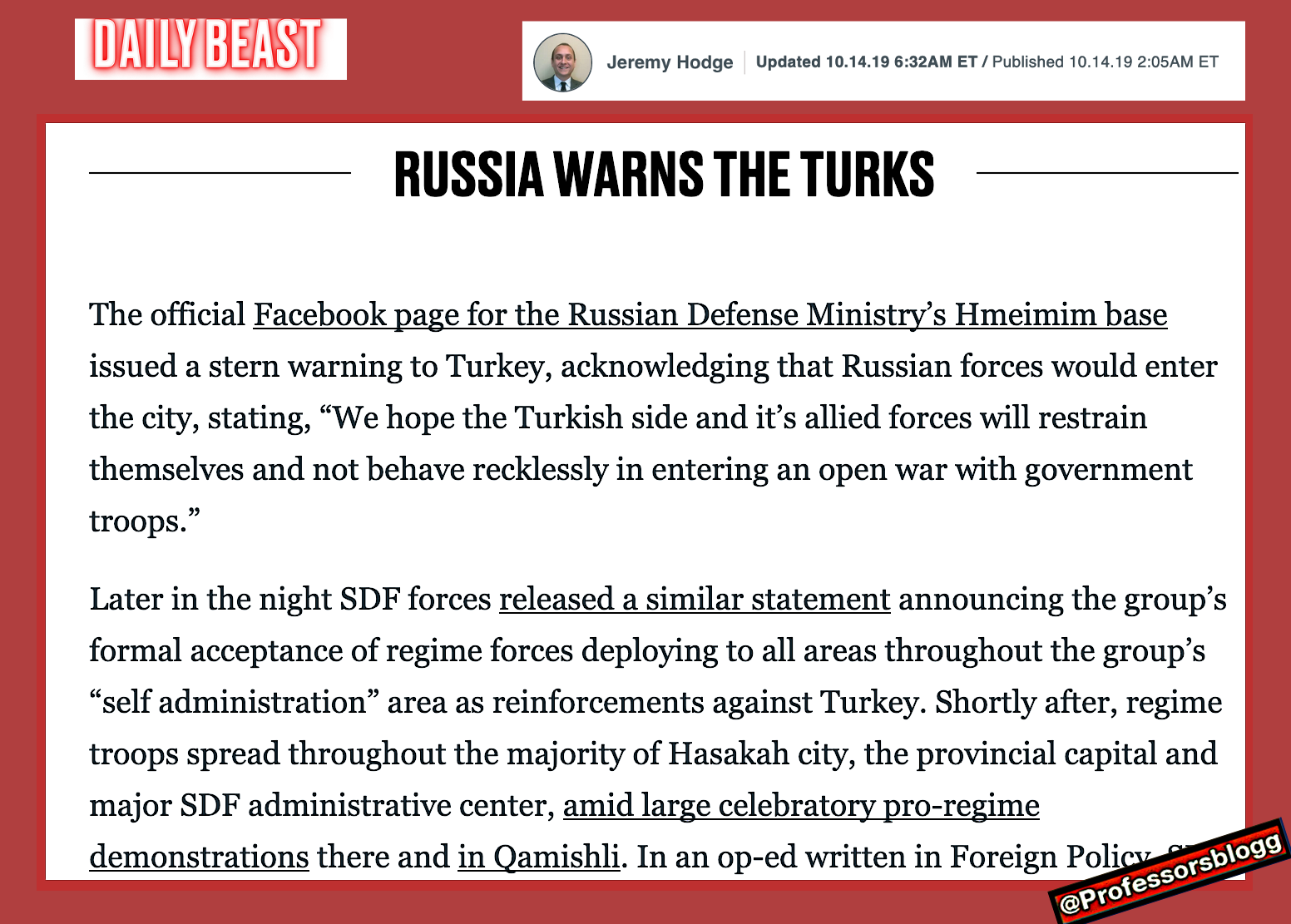 And the report adds:

“However before long, Syrian regime forces suffered a series of setbacks halting their advance–setbacks invflicted [sic], surprisingly, by U.S. forces. South of Raqqa, near the towns of al-Risafa, Tabqa and Mansoura, the Syrian Observatory for Human Rights and Raqqa is Being Silently Slaughtered reported that U.S.-coalition aircraft were circling above regime positions. Shortly after, both outlets would claim U.S. aircraft bombed regime positions in order to prevent them from advancing.” 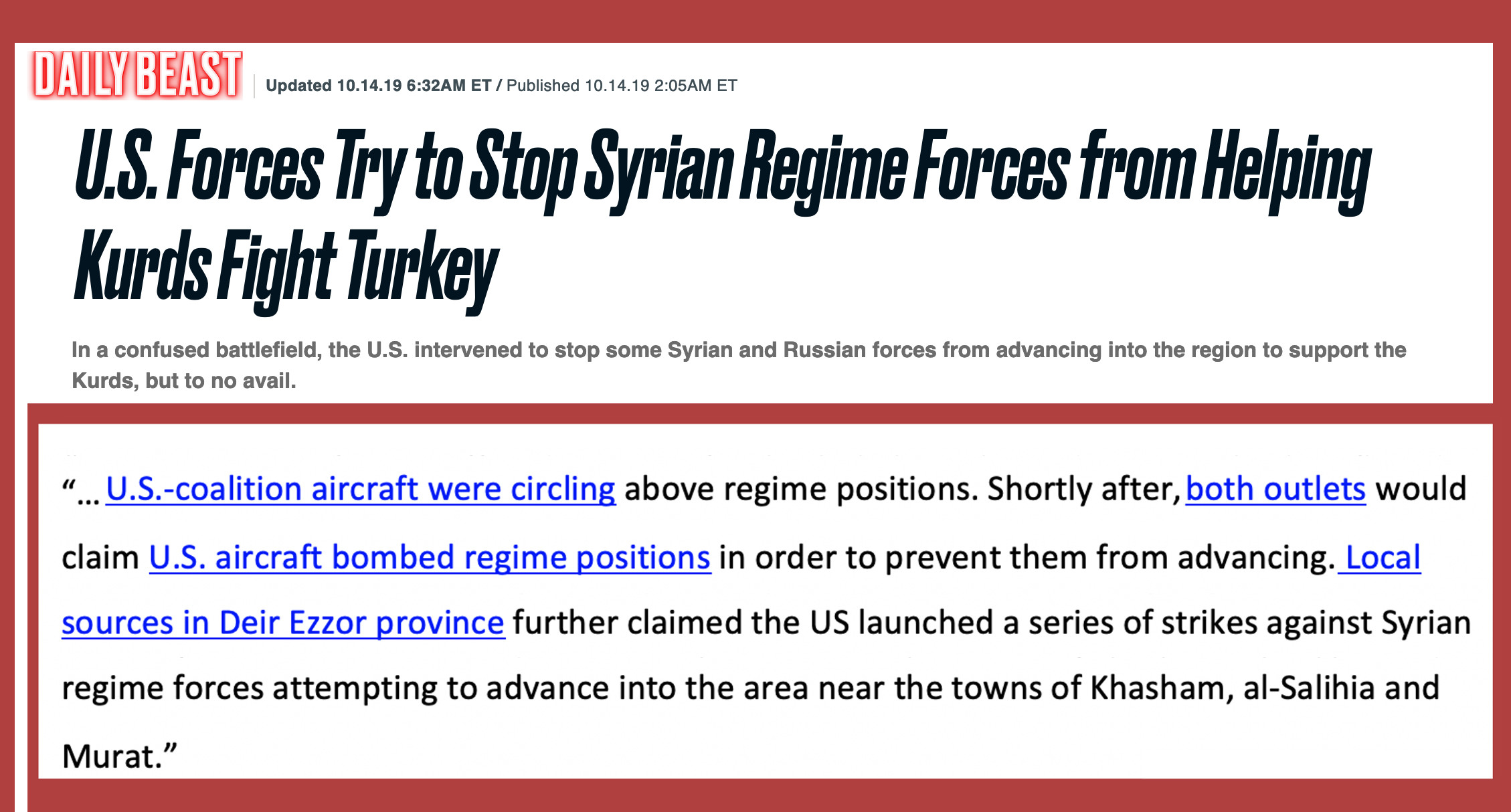 But the U.S. forces failed in stopping them:

“On a confused battlefield, the U.S. intervened to stop some Syrian and Russian forces from advancing into the region to support the Kurds, but to no avail.” –reads the subtitle of the Daily Beast report. 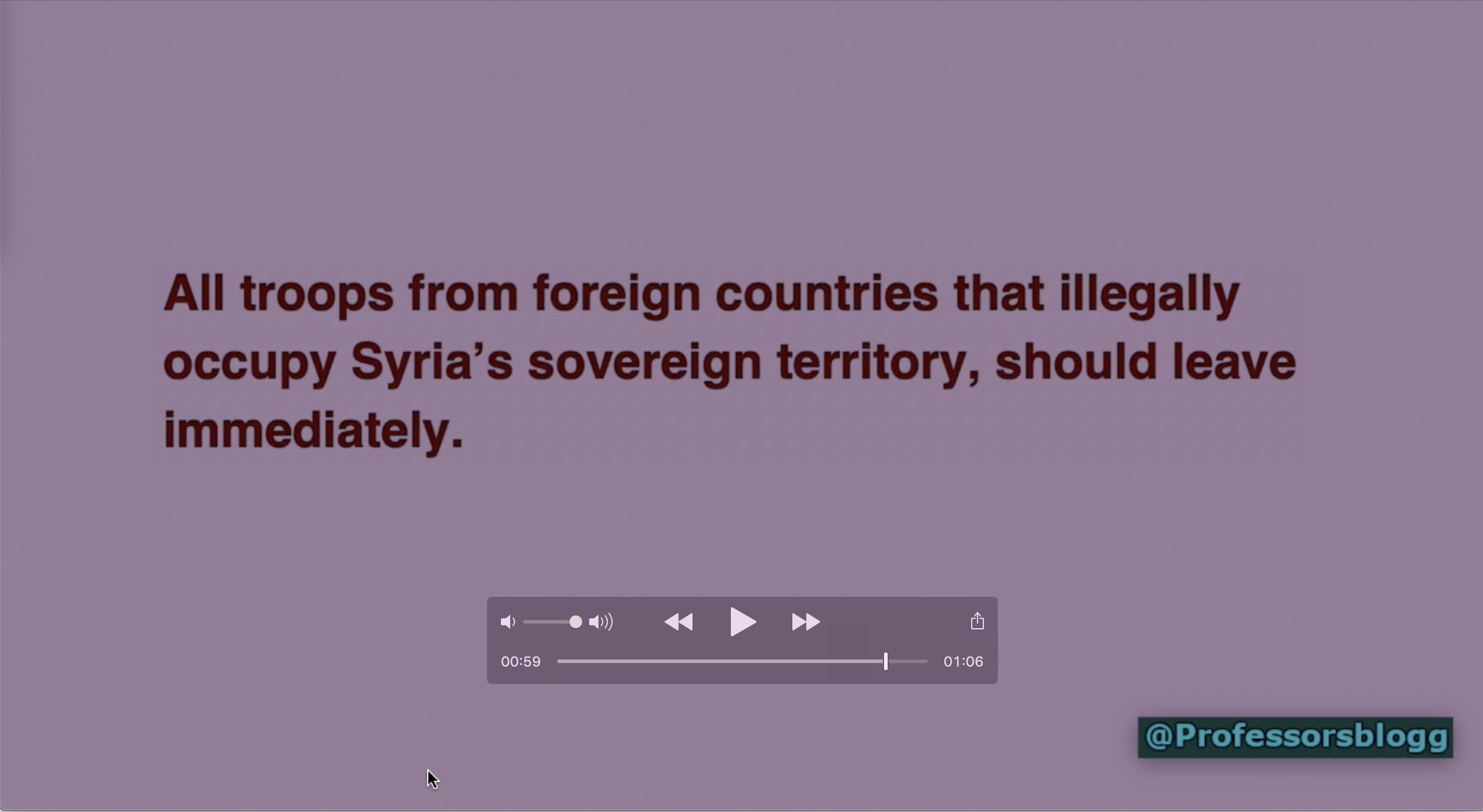