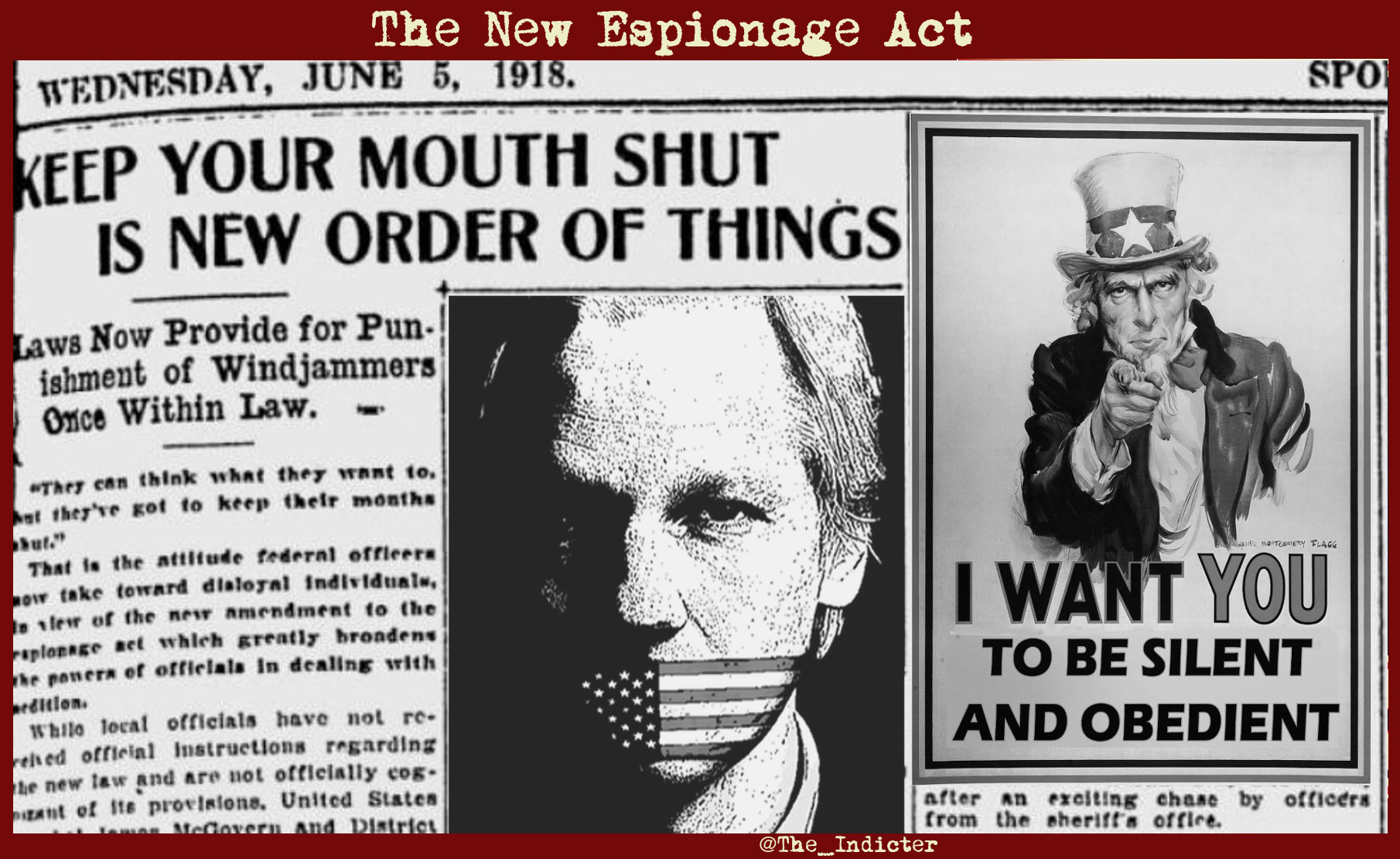 With the indictment of WikiLeaks founder Julian Assange and the imprisonment of whistleblower Chelsea Manning, we are seeing the US government’s blatant attack on the First Amendment. This assault now is officially acknowledged by a US federal court, where the judge dismissed a Democratic National Committee (DNC) civil suit against WikiLeaks on the grounds of First Amendment protections that apply to all journalists.

Assange, who has become a political prisoner in this war on the free press, was charged under the Espionage Act over publications exposing the US illegal wars in Iraq and Afghanistan. He is currently serving a 50 week sentence in Belmarsh prison in London for a violation of bail conditions he made in 2012 while attempting to obtain political asylum in Ecuador to mitigate the risk of extradition to the US. While in a maximum-security prison that holds some of the highest-risk prisoners in the country, he continues to fight US extradition.

The UN Special Rapporteur on torture, Nils Melzer, expressed his grave concerns for Assange, who is now facing 175 years in prison if convicted by the US. He assessed that, if extradited, he would “be exposed to a real risk of torture or other cruel, inhuman or degrading treatment or punishment”. Renowned journalist John Pilger, who visited Assange in prison last week, alarmed the public about his deteriorated health and noted how Assange is isolated and treated “worse than a murderer”.

The prosecution of Assange, if it were ever successful, would threaten the ability of journalists to receive information and publish information that the government deemed classified all around the world. Assange’s plight is tied to the future of press freedom. But what is at stake is a much larger issue that concerns all of us. Why ought the public engage in his fight against extradition? To answer this question, we have to examine why WikiLeaks matters.

While corporate media tries to perpetuate the US government’s official narrative that denies Assange is a journalist, the fact remains that what he has done with WikiLeaks is fundamentally no different than what media organizations routinely do. Moreover, WikiLeaks has published material exposing the government’s secrecy and corruption at a scale and speed that no other news outlets can ever match. The organization, as well as Assange, won numerous journalistic awards. So, aside from the excellence in journalism that WikiLeaks has demonstrated, what made the whistleblowing site become a target of the US government’s massive political retaliation?

The panel that granted WikiLeaks the Walkley Award, the Australian equivalent of the Pulitzer for excellence in journalism, in 2011 captured the essence of its journalism. They rewarded the organization noting the group’s “courageous and controversial commitment to the finest traditions of journalism: justice through transparency”.

WikiLeaks has published more than 10 million documents with a pristine record of accuracy and impeccable source protection. With its motto of “the courage is contagious”, Assange engaged in fearless journalism. The NSA whistleblower Edward Snowden, who was rescued by WikiLeaks while he was stranded in Hong Kong after being charged under the Espionage Act, acknowledged that “they run towards the risks everyone else runs away from.”

This moral courage to overcome fear comes from Assange’s commitment to justice. In releasing the Collateral Murder video that depicted a US military strike killing innocent civilians including two Reuters journalists in the suburb of Iraq, Assange indicated that the purpose of the publication was to show the world what modern warfare actually looks like and that his mission was “to expose injustice, not to provide an evenhanded record of events”. He made it clear that the goal of WikiLeaks is justice and the organization aims to achieve it through a method of transparency.

This commitment to justice that Assange demonstrated has been a taboo in modern journalism. A core maxim of journalism purports to a fair and balanced reporting with a creed of objectivity. Journalists are trained to see any subjective views in their work as unprofessional; allowing personal conviction to enter the process would cloud their ‘lens of objectivity’.

Yet journalists, like any other people, are embedded within the cultural and social values they live in. They cannot be immune from biases and perspectives colored by hidden agendas. Just claiming objectivity does not allow one to magically eliminate one’s subjective views and agendas. In fact, according to communications consultant James Moore, a reporter’s complete objectivity can never be attained. Moore dismantled the method of objectivity thus:

“Stories have always been framed for purpose and overdramatized because reporters want to lead a newscast or be above the fold on the front page . . . reporters cannot be objective because they are a product of their experiences. They cannot ignore their upbringing, socioeconomic status, circle of friends, personal self-interests, and the viability of the employers they serve.”

Without honest acknowledgment of the limitation of its method, the creed of objectivity has become a cloak for reporters to hide their motivations and hidden economic interests. As sociologist Gaye Tuchman pointed out, “‘objectivity’ may be seen as a strategic ritual protecting newspapermen from the risks of their trade.” It has also been used to regulate the profession, to keep journalists in line by condemning and stripping off the credentials of those who challenge the status quo and speak truth to power.

Through the corporate control of the airwaves and the consolidation of media, the mechanism of free press has been effectively dismantled. Big business grants journalists the monopoly of power to define a narrative of history. With the profession’s creed of objectivity, they actively facilitate injustice and oppression that the ruling elites inflict on everyday people. In his article titled “The Creed of Objectivity Killed the News,” Chris Hedges brought up the potential hazard of the stance of objectivity:

“This creed transforms reporters into neutral observers or voyeurs. It banishes empathy, passion and a quest for justice. Reporters are permitted to watch but not to feel or to speak in their own voices. They function as ‘professionals’ and see themselves as dispassionate and disinterested social scientists.”

The profession’s adherence to the pretense of objectivity has created passivity in the citizenry, discouraging any critical thinking and voices of dissents. Democracy has become an empty word, where people are relegated to being spectators. The absence of ordinary people who participate in the vital decision-making of society has led to a moral vacuum. Just as the Fourth Estate got infiltrated by commercial interests, without the checks and balances of power, the legal system got corrupted by politics, whereby judicial impartiality became unattainable. All over the West, the rule of law is breaking down. It is in this systemic failure of accountability, WikiLeaks brought moral courage and changed the media landscape.

WikiLeaks is a source driven journalism that is being true to the wishes of ordinary people within institutions, who take enormous risks to inform the public about fraud, abuse, waste and governments’ wrongdoing. WikiLeaks’ invention of scientific journalism replaced the source of legitimacy, which used to be journalists’ supposed “objectivity”, with authenticated raw material. By releasing full archives in a searchable format, allowing the public to draw their own conclusions, WikiLeaks challenged journalists’ purported objectivity and found a way for the conscience of ordinary people to directly inform the public.

WikiLeaks, with its pursuit of justice through transparency, brought truth that could restore the rule of law. Through the act of moral courage, Assange enabled the true function of a free press and unleashed the power of free speech. Mario Savio, spokesperson for the Free Speech Movement in the ’60s, described freedom of speech as something “that represents the very dignity of what a human being is . . .”

In the aftermath of WikiLeaks’ release of a trove of documents, we have seen this human dignity in the actions of ordinary people claiming their place in history. In a public address delivered while he was detained under house arrest in 2011, Assange spoke of the impact of his work:

From the election in Kenya and the Icelandic revolution to the Arab Spring and Occupy movements, WikiLeaks’ publications sparked a global uprising. Courage brought by this fearless journalism became contagious. Months after the Arab Spring, WikiLeaks cables had bolstered a peaceful youth movement against the political corruption of the media in Mexico. Revelations of Cablegate burst into Latin America, having a fresh impact on corrupt politics, changing media and public perspectives on major issues. It affected the course of a presidential election in Peru, transformed the media in Brazil, and in two countries led to the departure of US ambassadors.

With the First Amendment right as a pillar of its democracy, the United States made its departure from the British monarchy. Now, with the Trump administration’s outrageous extradition case against Assange, the US government, who claims to be a champion of free speech, is regressing society back to the tyranny of the Old World.

In a high security prison where he spends most of his time in solitary, Assange now awaits his extradition hearing, set to start in February next year. The legal battle of this persecuted journalist is a matter of life or death. On US soil, where Assange would have no chance of receiving a fair trial, the Attorney General, William Barr, recently called to resume executions for federal crimes after a 16-year pause. The state of Virginia, where WikiLeaks grand jury sits, still has a death penalty. Moreover, regardless of what President Trump said about WikiLeaks during the 2016 presidential campaign, he clearly stated that Assange should be given the death penalty.

The prosecution of Assange matters to us all. It goes beyond the life of one individual. It concerns the fundamental rights of ordinary people who, under America’s founding document, are endowed with the power to determine the future of democracy. Julian Assange is a journalist. WikiLeaks is a publisher. The journalism that Assange engaged in demonstrated his fierce commitment to the free speech tradition that recognizes the significance of ordinary people as authors of their own lives.

To honor this commitment, Assange kept publishing. Even when senior US officials incited his murder and former US Vice President Joe Biden called him a high-tech terrorist, he never wavered. From financial blockades to the harassment and threats against anyone associated with him, Assange fought to keep WikiLeaks alive. Despite enormous pressure to stop publishing the documents concerning the Clinton campaign during the 2016 presidential election, WikiLeaks never withheld this true information that belongs to the public. For this tenacity, he is condemned, smeared, deprived of his liberty and placed in profound isolation.

The impulse for justice that Assange brought to us, together with his sources’ courage, calls all to ignite our moral indignation. It urges us, of our own volition, to bear the burden of those truth-tellers who have sacrificed so much of their lives in order to defend the public’s right to know. Only through each person choosing to act with courage to claim and exercise the creative power inherent in free speech, can we free those prisoners of conscience and achieve our shared goal of justice.

This article appeared first in Antiwar.com