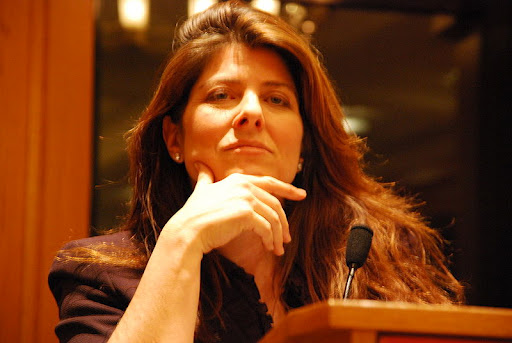 The scandalous rigged documentary about Julian Assange produced recently by the Swedish National Television [“Julian Assange – världens kärleksaffär”, SvT 1 7/4 2011]  referred much to prominent international figures who are known to be critical of the Swedish prosecution of the Assange-case. Among others, Naomi Wolf is mentioned because of her participation in the Swedish debate on the issue, which she has done among other through her articles publicized here in Professors blogg.

However, the references made in the documentary to Naomi Wolf’s position were not only erroneous but utterly distorted for the viewers.

Instead of directly interviewing Naomi Wolf – or source the information about  Wolf’s opinion on her publications – the documentary makers let a media researcher from Stockholm University, Anja Hirdman, provide explanations – such as a view that  American “left intellectuals” are so focused on the US war enterprises abroad that their attention towards  debate on sexual issues is “put in a shadow” – as positions attributed to Wolf in the editing of the documentary.

This was a complete misrepresentation of the participation of Naomi Wolf in the international debate on the abuses and irregularities in the Swedish case against Julian Assange.

In fact, and totally at the contrary of what Anja Hirman said in the documentary, Naomi Wolf has put forward concrete research and criticism regarding the police investigation of the rape accusations, which could provide vital factual evidence for the court proceedings. Further, Naomi has been reporting on global rape law for more than 23 years, as well as supporting women at rape crisis in the US and in Europe.

I warmly recommend the reader to study this unique article by Naomi Wolf in Professors blogg   Karl Rove, Sweden, and the Eight Major Aberrations in the Police Sex Crime Reporting Process in the Assange Case, as well as in a related issue the guest article by Attorney and journalist Andrew Kreig Karl Rove’s Swedish Connections: The Controversy and the Facts.  (Andrew Kreig is a respected American human rights advocate and Director of the Washington-based Justice Integrity Project. He is as well a columnist on Professors blogg).

The tone adopted by the Swedish Television documentary in misleading the Swedish viewers on these crucial international expert reports criticizing the legal management of the Assange case is unacceptable by any journalistic or ethical standards. And it  shows that this documentary is merely a continuation of  the known smear campaign against Assange and WikiLeaks so firmly stirred both in the Swedish mainstream media and in social-media by Swedish journalists from militant feminist cohorts and instigated by Swedish LGBT politicians.

If you are a Swedish reader you will have been able to see the misrepresentation of Naomi Wolf’s theses in the documentary for yourself here. Viewers outside Sweden have been prevented by the State-owned television network from seen the documentary “for legal reasons”. This in spite that other documentaries about Julian Assangee  produced by the same network have been released by SvT for their international viewers.

In agreement with author Naomi Wolf, I published the link to her article “Sweden’s Serial Negligence in Prosecuting Rape Further Highlights the Politics behind Julian Assange’s Arrest” in the Professors’ Blogg, in April 2011*. I reproduce the link here below.

*This article appeared in the Professors Blogg, 15 April 2011, and it was originally published in HuffPost.com.