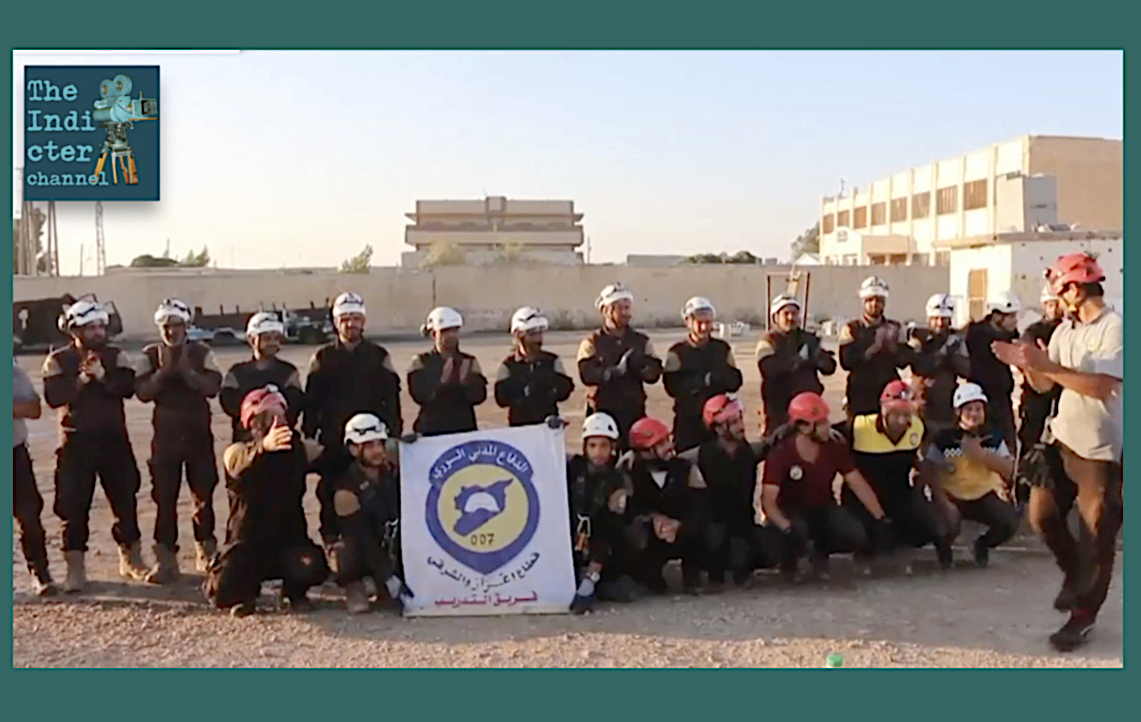 White Helmets operatives training “recruits”, rehearsal stage fires and fake lifesaving …and how to pose in photographs and videos later distributed by pro-NATO press agencies as if were ‘real rescue’ imagery or footage. By Marcello Ferrada de Noli Professor Emeritus and The Indicter chief editor   The AFP photo above correspond instead  to a fake […]

White Helmets operatives training “recruits”, rehearsal stage fires and fake lifesaving …and how to pose in photographs and videos later distributed by pro-NATO press agencies as if were ‘real rescue’ imagery or footage.

The AFP photo above correspond instead  to a fake “lifesaving” maneuver during a rehearsal by the White Helmets, as demonstrated in a video published by The Indicter Channel.

Google News indexed yesterday (July 28, 2918) a news report about the White Helmets rescued by Israel, and published in YnetNews. This publication is, according to Wikipedia, the “English-language Israeli news website of Yedioth Ahronoth, Israel’s most-read newspaper, and the Hebrew news portal, Ynet. So I understand it’s a main source used by Western mainstream media, and of course by OPCW, under the category they call “open sources”. As I have already commented in a report that made its way to the UN Security Council, these “open sources” have formed the backbone of the allegations of chemical attacks in Syria imputed to the government forces.

And Ynet was not the only news outlet that used the fake-rescuing photos signed “AFP” (French Press Agency”) to deceive about the White Helmets. A similar take, using the same image above, was used by Trendolizer:

Nevertheless, the Ynet article, titled “As some ‘White Helmets’ escaped Syria, most were left behind” contains an extensive pictorial showing the rescue work of the ‘White Helmets’, referred as to “a civilian rescue organization that works under bombardment to pull people from the rubble.” Of the nine photos in the pictorial, seven are credited to “AFP” press agency, one to “AP” (Associated Press), and one to Reuters.

In the pictures showed in the news article we see the Withe Helmets volunteers rescuing victims of attacks, some of them with bloody wounds or emergency paramedical aid worked on them.  Examples below:

Of course, any one with the idea of amplifying the picture above, could discover that the “patient” is another White Helmets operative. He sports the same uniform-trousers, and the tiny “White Helmets” symbol has not been Photoshop-erased from the right pocket.

We also see in the article a dramatic image of White Helmets rescuers extinguishing with bravery, a close distance, the fire exploding in a passenger bus – a rescue operation that, in the context given by the report, has been conducted “under bombardment” – meaning attacks presumably perpetrated by Syrian government forces or its allies.

All of the “rescue” scenes depicted in the AFP photographic material showed in the commented article do not correspond to actual, true, rescue or lifesaving operations. Instead, those are scenes from a rehearsal conducted by the White Helmet in Marea, near Aleppo. It’s about a training and rehearsal for instance on how to set ablaze ‘passenger buses’ -and posing for the camera while extinguishing the fire pretending it is “caused by the attack of government forces”.

In no place in the the article YnetNews article is explained the true origin of the scenes depicted in the photographs, all of them bearing the sign of reputed pres agencies, such as AFP.

Nevertheless, The Indicter had access to a video in which the scenes are described as “new White Helmets recruiters graduate…after taking part in training exercises”. And this footage is now uploaded by The Indicter Channel in You Tube. Click here or in the image below for the video:

The source of our footage is an uploaded material by Sharja24News. Facsimile here below, uploaded under the category “news and politics“:

A reflection at first sight is to realize that White Helmets are not any longer referred as “new volunteers”, but as “new recruits”. And it correctly given, because the White Helmets operatives receive a monthly salary –indexed as “month stipend” by Google.

So, the material distributed in those regards by the Western MSM –as in the article commented above– do not correspond to real scenes of rescuing by the White Helmets.

And the immediately concern that arises is how real could these other similar scenes distributed by countless press agencies and media outlets are. For example, this scene reported as “after an unknown explosion” – no more details given:

Article edited by Dr. Lena Oske, MD, from The Indicter Editorial Board.