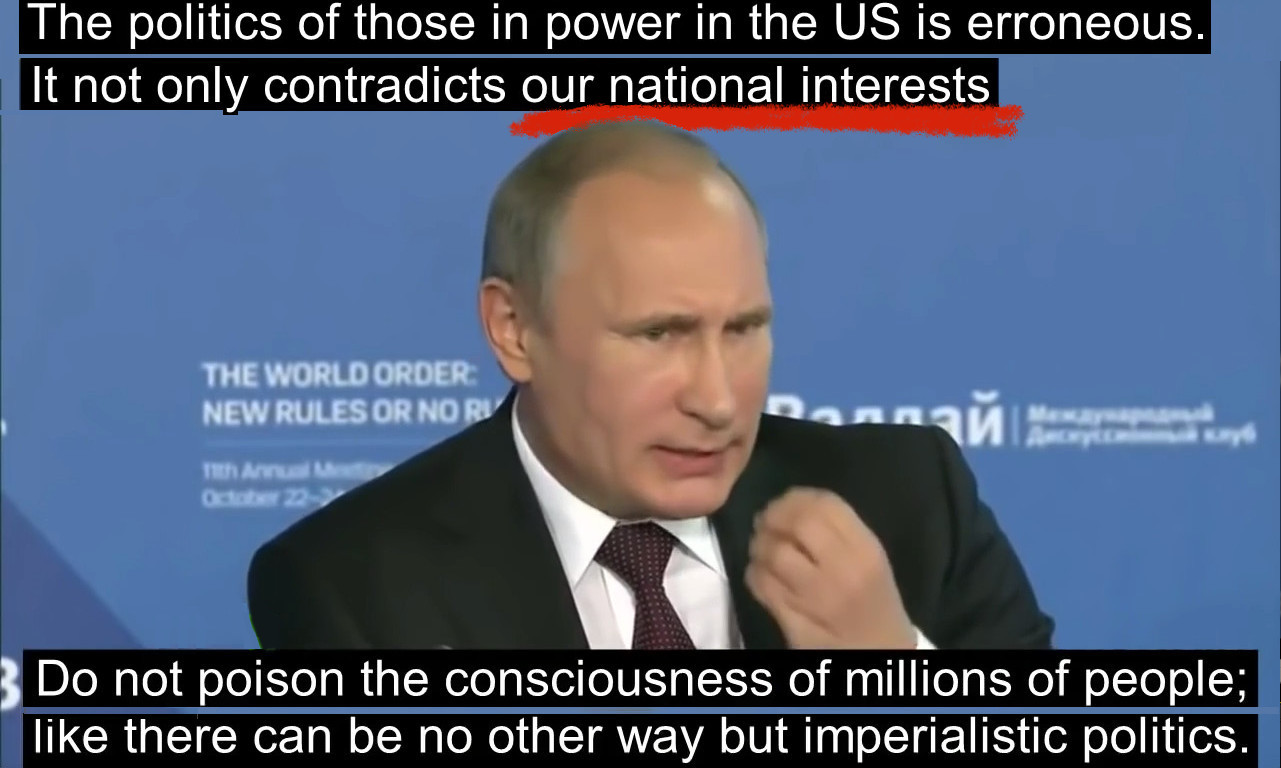 By Mike Whitney for The Indicter* Above: Texts excerpted from Vladimir Putin’s statements in the video “Who created Isis?” Added by The Indicter Would you be willing to defend your country against a foreign invasion? That’s all Putin is doing in Syria. He’s just preempting the tidal wave of jihadis that’ll be coming his way once the current […]

Above: Texts excerpted from Vladimir Putin’s statements in the video “Who created Isis?” Added by The Indicter

Would you be willing to defend your country against a foreign invasion?

That’s all Putin is doing in Syria. He’s just preempting the tidal wave of jihadis that’ll be coming his way once the current fracas is over.  He figures it’s better to exterminate these US-backed maniacs in Syria now than face them in Chechnya, St Petersburg and Moscow sometime in the future.  Can you blame him? After all, if Washington’s strategy works in Syria, then you can bet they’ll try the same thing in Beirut, Tehran and Moscow.

So what choice does Putin have?

None. He has no choice.  His back is against the wall. He has to fight.  No one in Washington seems to get this. They think Putin can throw in the towel and call it “quits” at the first sign of getting bogged down. But he can’t throw in the towel because Russia’s facing an existential crisis.  If he loses, then Russia’s going to wind up on the same scrap heap as Afghanistan, Iraq or Libya. You can bet on it. So the only thing he can do is win. Period. Victory isn’t an option, it’s a necessity.

Do you think that Putin and his advisors have had their heads in the sand for the last 15 years, that they haven’t noticed the US rampaging around the globe bumping off one country after the other leaving behind nothing but anarchy and ruin? Do you think they don’t know that Russia is on the top of Washington’s hit-list? Do you think they haven’t noticed NATO inching closer to Russia’s borders while foam-at-the-mouth politicians in Washington wave their fists and growl about Hitler Putin and evil Russia?

But all that’s done is focus the mind on the task at hand, and the task at hand is to whoop the tar out of the terrorists, put an end to Washington’s sick little jihadi game, and go home. That’s Russia’s plan in a nutshell.  No one is trying to cobble together the long-lost Soviet empire. That’s pure bunkum.  Russia just wants to clean up this nest of vipers and call it a day. There’s nothing more to it than that.

But what if the going gets tough and Syria becomes a quagmire?

That doesn’t change anything, because Russia still has to win. If that means sending ground troops to Syria, then that’s what Putin will do. If that means asymmetrical warfare, like arming the Kurds or the Yemenis, or the Taliban or even disparate anti-regime Shiites in Saudi Arabia, then he’ll do that too. Whatever it takes. This isn’t a game, it’s a fight for survival; Russia’s survival as a sovereign country. That’s what the stakes are. That’s not something Putin takes lightly.

Keep in mind, that Russia’s situation is entirely different than that of the US. The US is engaged in a vast “pivot” project to remove secular regimes that are hostile towards Washington, control vital resources from North Africa through the Middle East and across Central Asia, establish military bases wherever necessary, maintain the US dollar as the world’s reserve currency, and redraw the map of the ME in a way that best suits the commercial and strategic interests of its core constituents; the banks, the multinational corporations and the big weapons manufacturers.

Russia doesn’t have any grandiose plans like that. Putin just wants to sell oil, make money, raise living standards in Russia, and get on with life. He figured that if he played by the rules– Washington’s rules– joined the WTO, then he’d be okay. But that’s not the way it works. The WTO’s rules, like the IMF’s rules are only upheld as long as they suit Washington’s strategic objectives. And when they don’t, well, then they’re dumped like a hot potato just like they were when the US implemented its economic sanctions on Russia or when the IMF allowed Ukraine to stiff Moscow for $3 billion in loans.  The point is, it’s a free market when Washington says it’s a free market, otherwise all bets are off.

The same rule applies to terrorism. For example, On Saturday, a group of terrorists detonated a car bomb near a hospital in the Syrian city of Homs. 22 people were killed and more than 70 were injured. So the Syrian government asked the UN Security Council to condemn the attack. Naturally, the Security Council said “Yes”, right?

Wrong. In fact, the UNSC refused to make any statement at all about the attack because, to do so, would be seen as supportive of the Syrian government that the US wants to topple. The bottom line: Blowing up civilians with car bombs is hunky-dory as long as the US benefits from it.

By the way, the Security Council is currently chaired by the US who made sure the draft was never even put to a vote.

The reason I ask this now is because, on Tuesday, Secretary of State John Kerry is scheduled to attend an emergency meeting in Moscow with his Russian counterpart Sergei Lavrov to discuss issues that are too sensitive to reveal to the public. There’s a lot of speculation about what the two men will talk about, but the urgency and the secrecy of the meeting suggests that the topic will be one of great importance. So allow me to make a guess about what the topic will be.

When Kerry arrives in Moscow tomorrow he’ll be rushed to meeting room at the Kremlin where he’ll be joined by Lavrov, Putin, Minister of Defense Sergey Shoygu and high-ranking members from military intelligence. Then, following the initial introductions, Kerry will be shown the evidence Russian intelligence has gathered on last Sunday’s attack on a Syrian military base east of Raqqa that killed three Syrian soldiers and wounded thirteen others. The Syrian government immediately condemned the attack and accused US warplanes of conducting the operation. Later in the day,  Putin delivered an uncharacteristically-harsh and threatening statement that left no doubt that he thought the attack was a grave violation of the accepted rules of engagement and, perhaps, a declaration of war. Here’s what he said:

“Any targets threatening the Russian groups of forces or land infrastructure must be immediately destroyed.”  This was followed shortly after by an equally disturbing statement by Putin to the Russian Defense Ministry Board:

“Special attention must be paid to strengthening the combat potential of the strategic nuclear forces and implementing defense space programs. It is necessary, as outlined in our plans, to equip all components of the nuclear triad with new arms.”

Why would an incident in the village of Ayyash in far-flung Deir Ezzor Province be so important that it would bring the two nuclear-armed adversaries to the brink of war?

I’ll tell you why: It’s because there were other incidents prior to the bombing in Ayyash that laid the groundwork for the current clash. There was the ISIS downing of the Russian airliner that killed 224 Russian civilians. Two weeks after that tragedy, Putin announced at the G-20 meetings that he had gathered intelligence proving that 40 countries –including some in the G-20 itself–were involved in the funding and supporting of ISIS. This story was completely blacked out in the western media and, so far, Russia has not revealed the names of any of the countries involved.

So, I ask you, dear reader, do you think the United States is on that list of ISIS supporters?

Then there was the downing of the Russian Su-24, a Russian bomber that was shot down by Turkish F-16s while it was carrying out its mission to exterminate terrorists in Syria. Many analysts do not believe that the   Su-24 could have been destroyed without surveillance and logistical support provided by US AWACs or US satellites. Many others scoff at the idea that Turkey would engage in such a risky plan without the go-ahead from Washington. Either way, the belief that Washington was directly involved in the downing of a Russian warplane is widespread.

So, I ask you, dear reader, do you think Washington gave Turkey the greenlight?

Finally, we have the aerial attack on the Syrian military base in Deir Ezzor, an attack that was either executed by US warplanes or US-coalition warplanes. Not only does the attack constitute a direct assault on the Russian-led coalition (an act of war) but the bombing raid was also carried out in tandem  with a “a full-scale ISIS offensive on the villages of Ayyash and Bgelia.”  The coordination suggests that either the US or US allies were providing  air-cover for ISIS terrorists to carry out their ground operations.  Author Alexander Mercouris– who is certainly no conspiracy nut–expands on this idea in a recent piece at Russia Insider which provides more detail on the incident. The article begins like this:

“Did Members of the US-Led Coalition Carry Out an Air Strike to Help ISIS? Russia Implies They Did. Russian statement appears to implicate aircraft from two member states of the US led coalition in the air strike on the Syrian military base in Deir az-Zor….This information – if it is true – begs a host of questions.

On the face of it, it looks like they were. After all, if what happened was simply a mistake, it might have been expected that the US and its allies would say as much.  If so, it is an extremely serious and worrying development, suggesting that some members of the US-led anti-Islamic State coalition are actually in league with the Islamic State.  (“Did Members of the US-Led Coalition Carry Out an Air Strike to Help ISIS?” Alexander Mercouris, Russia Insider)

So there it is in black and white. The Russians think someone in the US-led coalition is teaming up with ISIS. That should make for some interesting conversation when Kerry sashays into the Kremlin today.

Does Kerry have any clue that Putin and his lieutenants are probably going to produce evidence that coalition warplanes were involved in the bombing of the Syrian military base?  How do you think he’ll respond to that news? Will he apologize or just stand there dumbstruck? And how will he react when Putin tells him that if a similar incident takes place in the future, Russian warplanes and anti-aircraft units are going to shoot the perpetrator down?

If I am not mistaken, Kerry is in for a big surprise on Tuesday. He’s about to learn that Putin takes war very seriously and is not going to let Washington sabotage his plans for success. If Kerry’s smart, he’ll pass along that message to Obama and tell him he needs to dial it down a notch if he wants to avoid a war with Russia.

Mike Whitney lives in Washington state. He is a contributor to Hopeless: Barack Obama and the Politics of Illusion (AK Press). The book Hopeless is also available in a Kindle edition. The author can be reached at fergiewhitney@msn.com.

* This article originally appeared on Counter Punch. Reproduced in The Indicter in agreement with author Mike Whitney.