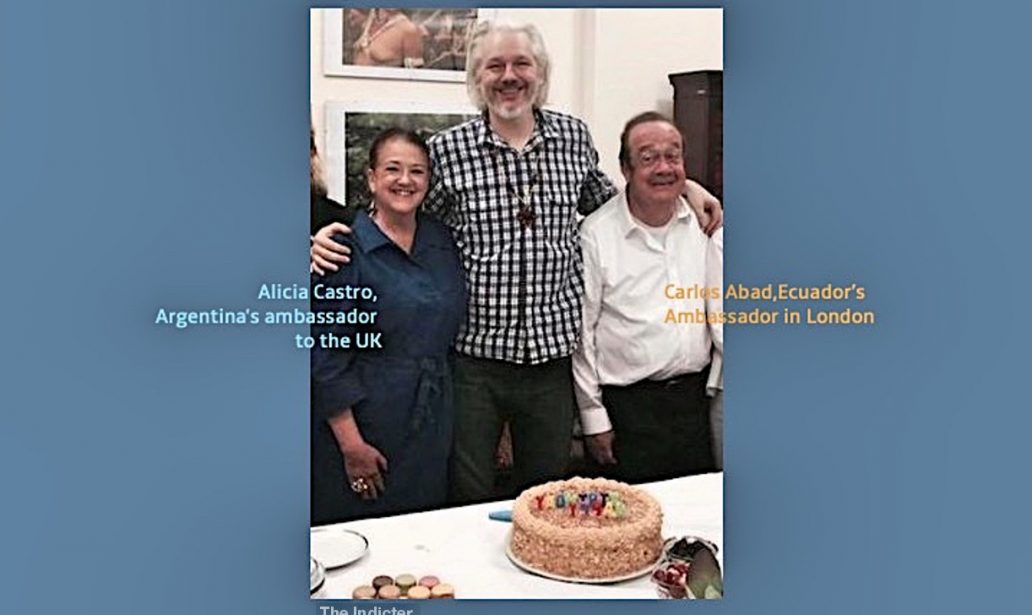 “On this Fourth of July weekend, the American people have opportunities to demonstrate our patriotism by standing up for the freedom of Julian Assange. As we celebrate Independence Day, we can remember the plight of a journalist who will be spending his 50th birthday in isolation inside a prison cell.”

Member of The Indicter editorial board

On July 3,  2020, Julian Assange will turn 50 years old, spending his third birthday behind bars. The WikiLeaks publisher has been held without any formal charges alongside criminals and terrorists inside London’s high-security prison for exposing the US government’s war crimes in Iraq and Afghanistan.

On January 4, 2021, the British Judge Vanessa Baraitster rejected the US extradition request of Assange on medical grounds, noting her concerns about the harsh US prison condition. Two days later the judge denied his bail application, sending Assange straight back to the same prison that contributed to his deteriorating health.

In February, the Biden Justice Department decided to pursue the extradition case for conspiracy to commit computer intrusion. The UK’s High Court is yet to decide whether it will grant the US prosecutors permission for their appeal. Meanwhile, important revelations have now emerged that challenge the factual basis of this case.

On Saturday, June 26, Icelandic newspaper Stundin reported that the key witness in the US government’s case against Assange has admitted to fabricating key accusations in the indictment. The man identified is Sigurdur Ingi Thordarson, who is said have a history of sociopathy, and has convictions for sexual abuse of minors and financial fraud. In an interview with Stundin, he now admits that he was recruited by US authorities to work with them in exchange for immunity from prosecution in the US.

The extensive article, published in Iceland, suggests the US prosecutors have engaged in efforts to frame Assange as a criminal rather than as a journalist. It shows the US government’s attempt to criminalize journalism.

During the Obama presidency, the US Department of Justice was eager to prosecute Assange and WikiLeaks for the crime of publishing classified documents. In November 2013, officials at the Justice Department determined it would be difficult to do so due to concerns that it would set a precedent which could strip away the First Amendment protection for the press – the so-called “New York Times problem”.

The Trump administration saw things differently. They had no such reservation. Jeff Sessions, Trump’s first attorney general stated that Assange’s arrest is a priority. Mike Pompeo, former CIA Director, who has become Trump’s U.S. Secretary of State, referred to the whistleblowing site as “a non-state hostile intelligence service”.

In 2019, after President Trump appointed William Barr as Attorney General, the Trump DOJ issued an indictment against Assange, adding a criminal charge accusing him of participating in a “hacking” conspiracy. As alleged by Assange’s defense counsel, the latest scoop from Stundin provides further evidence that the US government’s charges against Assange are politically motivated.

The prosecution of Assange has been filled with problems related to abuse of process. Before he was sent to Belmarsh, Assange was arbitrarily detained inside the Ecuadorian embassy in London for over seven years. He was deprived of medical care and sunlight by the U.K. government’s refusal to honor his right of asylum— despite repeated warnings from the UN Working Group on Arbitrary Detention.

For years, while he was inside the embassy, Assange was spied on by a Spanish security contractor that was, allegedly, working secretly on behalf of the CIA. Surveillance through video cameras and audio operating 24 hours a day, seven days a week, extended to privileged conversations between Assange and his lawyers and doctors, as well as with journalists and friends. The spying even operated inside the women’s bathroom

Assange’s extradition hearings, which took place in February 2020 and September 2020, have met with a complete media blackout. Craig Murray, former UK ambassador to Uzbekistan, who attended the proceedings everyday, described it as being stage managed as a show trial and gave many graphic examples of Assange being treated like a violent criminal. On the first day of trial, Assange was subjected to strip searches twice, handcuffed 11 times and his court papers were removed. In the courtroom during the hearings Assange was not allowed to sit with his lawyers. Instead, he was placed within a glass cage.

The US indictment of Assange is recognized by free speech groups as an unprecedented attack on the First Amendment. This is the first time that the US Espionage Act has been used against a publisher. All major media, press freedom, civil liberties, and international human rights advocacy organizations oppose proceedings against Assange – who faces a 175 sentence if he were to be extradited.

A cross-party group of British politicians has expressed concern about the implications of Assange’s case for press freedom in the UK. On Tuesday, June 29, members of  the UK Parliament Jeremy Corbyn, Diane Abbott and Richard Burgeon visited the Belmarsh prison to raise their voices against ongoing refusal of the prison governor and the Justice Secretary’s to allow a meeting with Assange. They delivered a letter signed by 20 parliamentarians demanding to exercise their right to visit him. Australian Parliamentarians have recently sent a video message asking the US government to drop the unprecedented Espionage Act charges against Assange.

As support for this Australian journalist’s freedom grows, Assange’s father and half brother, John and Gabriel Shipton are now wrapping up their travels across America to save Julian’s life. Kicking off the #HomeRun4Julian tour in Miami on June 6, Assange’s family members have been meeting with activists, press, and policymakers to raise awareness of the importance of protecting whistleblowers and journalists. They have stressed the value of the First Amendment, and that a key way to honor that is for the US government to finally let Julian come home.

Assange’s partner Stella Moris is now also urging the US to drop the case. She emphasized, “President Joe Biden must let Julian Assange go free if he wants the United States to become a beacon for a free press once again”. Moris, who recently visited Assange in Belmarsh for the first time in 8 months since the prison implemented Covit restrictions, has two young boys, Gabriel, four, and Max, two with Assange. The couple are now planning to get married in the prison.

On this Fourth of July weekend, American people have opportunities to demonstrate our patriotism by standing up for the freedom of Julian Assange. As we celebrate Independence Day, we can remember the plight of a journalist who will be spending his 50th birthday in isolation inside a prison cell.

Our Founding Fathers who fought against tyranny for the birth of the republic recognized freedom of speech as a pillar of a free society. Assange, through his publishing activities, fiercely defended the principle of free press. He sacrificed his personal liberty so that we all can have our own freedom.

It’s time to end the political prosecution of the WikiLeaks publisher, free Assange and bring him home. This would help the United States to free itself from the crimes it has committed and to redeem the ideals that founded this nation.