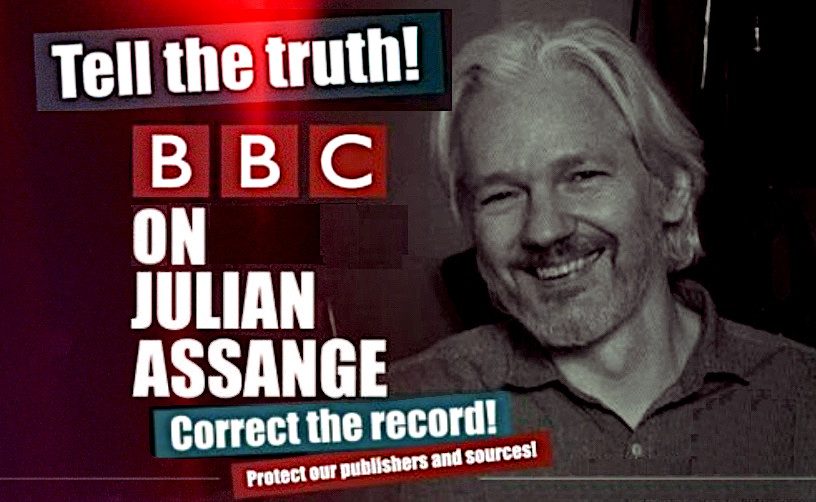 Acting chief editor of The Indicter

This is the first of two articles analysing the role of the BBC in the state-sponsored persecution of Julian Assange.  It analyses how the British government used the BBC to present Assange as a criminal following his arrest on 11th April 2019.  It then examines how the BBC helped to control the narratives around the stripping of Assange’s asylum, a violation of international law.

To understand the position the BBC has taken towards Julian Assange, founder of Wikileaks, award-winning journalist, publisher, fiancé, father, son, brother, human being, it is useful to know some basic BBC facts.

The heads of the BBC are cherry-picked by the government.  They often have long and close links to the Prime Minister, such as Chris Patten who was a member of Margaret Thatcher’s cabinet in 1989 and David Clementi, former deputy head of the Bank of England, advisor to Margaret Thatcher in the 1980s.  The current head is Richard Sharp, former advisor to Boris Johnson when Johnson was Mayor of London. Sharp was also the manager of the billionaire Chancellor of the Exchequer, Rishi Sunak when Sunak worked at Goldman Sachs bank. A political ally of the government, Sharp has donated £400,000 to the Tory party. He is so rich he can afford to work for the BBC for free.

It remains a criminal offence in Britain to have a TV and not pay for a TV licence, which provides the main source of income for the BBC.  People have served time, and still can, for not paying the licence fee.

In 2020 the licence fee income amounted to £3,750,000,000, more than the UK spent on its prisons in 2019.  Its commercial activities generate more income. The BBC’s funding position, described by the regulator OFCOM as privileged,  provides senior journalists, news anchors and news presenters with lucrative salaries.

The Foreign Secretary controls the objectives, priorities, targets and languages in which the World Service is delivered.

The BBC World Service is not regulated, it is exempt from official scrutiny despite the BBC having a far greater international audience than domestic. The BBC’s global news could possibly reach a weekly target of 500 million by 2022.

The World Service is funded by licence fees and by the government.  In 2015 it was allocated £289 million from the National Security and Defence budget under the then PM David Cameron, to be spread over five years.  This may very possibly be continued.

“No other national asset has the potential to serve Britain so powerfully – uniting us as one nation at home, and representing global Britain abroad… The BBC is a great national asset; a diminished BBC is a weakened United Kingdom.”

In short, the BBC helps the British elite to control the narrative at home and abroad.  With the BBC on board, conjointly with other corporate media servile to the powerful, tyranny can be exported to countries targeted by the Foreign Office in the form of military, economic or proxy wars, façade managed as ‘humanitarian’ or wars against terror.  Julian Assange has helped us to understand this tyranny.

Within an hour and a half of Assange’s arrest on 11th April 2019, the BBC broadcasted a statement by Jeremy Hunt, the then Foreign Secretary.  The BBC refused to answer any FOI questions about this interview, and so far the Foreign Office has denied any correspondence exists around it (a review is supposedly in progress).  It was likely filmed in a room in the Foreign Office, indicated by this image of former junior Foreign Office Minister Alan Duncan, apparently taken in the same place.  This suggests that Hunt invited the BBC to the Foreign Office explicitly to manage the narrative around the Ecuadorian government stripping Assange of his asylum.

Hunt made no reference to any crime, charge or conviction; by implication he painted Assange as a dishonest, despicable and cowardly character “Assange is no hero” “…has been hiding from the truth for years” “…has held the Ecuadorian embassy hostage…”

At the time the statement was broadcasted all Assange was known to be wanted for was a 7-year old breach of police bail which was not attached to any charge, but which had resulted from him seeking asylum at the Ecuadorian embassy.  In essence, Hunt used Britain’s most powerful ‘national asset’ to create a sense of grievous criminal behaviour over a minor violation of law,.  This made no legal or logical sense

Jeremy Hunt had not been known to use Britain’s most powerful ‘national asset’ to make similar speeches about the thousands of people who have skipped bail over the years in Britain, or about known serious offenders but on 11th April 2019 he decided to single out Julian Assange for such treatment.

Hunt’s treatment of Assange can be compared to the case taken to the ECHR against Vladimir Putin by Mikhail Khodorkovsky when Putin was the Prime Minister of the Russian Federation.  Khodorkovsky claimed Putin violated his right to the presumption of innocence by making certain comments, including “a thief should be in jail” prior to Khodorkovsky’s second trial for financial crimes.  However, the ECHR ruled that Putin did not violate the presumption of innocence as:

We now compare the same criteria to Hunt’s comments about Assange and we see the opposite applies:

In Khodorkovsky’s case the ECHR explained both defamation and violation of the right to the presumption of innocence:

The Court reiterates that Article 6 § 2 will be violated if a statement of a public official concerning a person charged with a criminal offence reflects an opinion that he is guilty before he has been proved so according to law. It suffices, even in the absence of any formal finding, that there is some reasoning to suggest that the official regards the accused as guilty.

The Court has previously held that Article 6 § 2, in its relevant aspect, is aimed at preventing the undermining of a fair criminal trial by prejudicial statements made in close connection with those proceedings. Where no such proceedings are, or have been in existence, statements attributing criminal or other reprehensible conduct are relevant rather to considerations of protection against defamation and raising potential issues under Article 8

Other ministers, including the then PM Theresa May, the then Home Secretary Sajid Javid and the then junior Foreign Minister Alan Duncan, all piled in with statements that Assange was “rightly facing justice”.  Yet all they could muster between them was a minor police bail skipping offence, showing a wildly disproportionate use of their high-ranking public offices, two of them using the ready-to-serve-empire BBC, available on tap.  In Hunt’s case he used both the BBC and Twitter.  Of all the statements on Assange’s arrest it was Theresa May’s that referenced the charge of bail skipping. Following this she claimed “…this goes to show that in the UK, no one is above the law”, another phrase employed throughout the day by this group of ministers.

This reference to UK law was by design: Assange had been in the Ecuadorian embassy legitimately under international laws of asylum.   In 2015 the UN Working Group on Arbitrary Detention (UNGWAD) stated the UK “refused to honour its obligations to respect Mr. Assange’s asylum under either the 1951 Refugee Convention, or customary international law” and that  Assange was being held in arbitrary detention in the Ecuadorian embassy.  So, on the day of his arrest, Britain’s top ministers engaged in a campaign of buzz words to bury any noise that could be made about the UNGWAD statement and cover the crimes of the Ecuadorian government in removing Assange’s asylum.

All this before Assange had even entered court over the bail charge.  Assange had no hope of the presumption of innocence.  Their behaviour was an example of public mobbing’ , a term used by the UN Rapporteur on Torture, Nils Melzer, to describe how public institutions and officials have attacked Assange.

And it was not just the general public who made up the BBC audience: many judges would have listened to the BBC and other corporate news reporting ministers’ statements that day.

A few days later Assange received the harshest sentence possible in Britain for this minor offence: 12 months in prison.   He was sent to Britain’s most secure prison, where he remains almost two and a half years later as a favour to the US government. 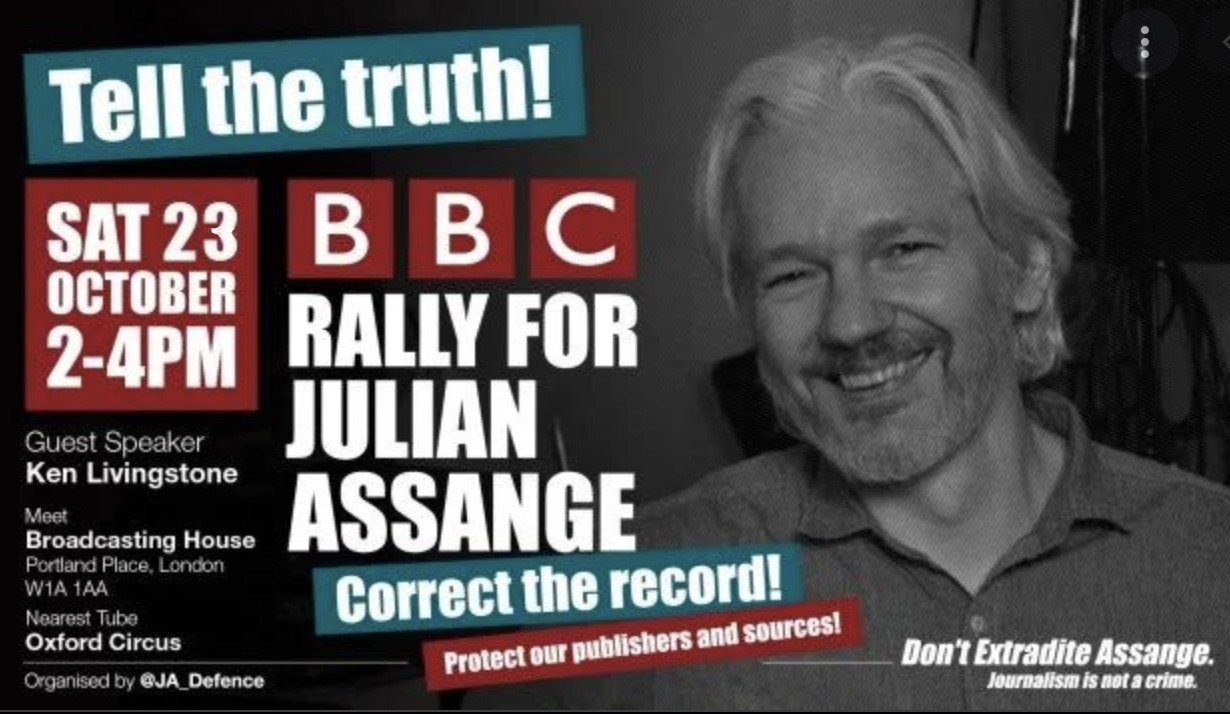 By the day of Assange’s arrest, the same day the US requested his extradition from Britain, the BBC had published multiple articles on Assange’s fears about this happening.  Examples are here, here, here here and here. Yet a few days after Assange’s arrest, reporter Jon Sopel, on a £245,000 BBC salary, sat with the President of Ecuador, Lenin Moreno, and ignored almost a decade of BBC articles on the subject.  Instead, Sopel fed Moreno lines that allowed him to spread whatever defaming and damning narratives he wanted:

Moreno’s answers painted a filthy faeces-smearing , physically violent, unhinged cyber-terrorist spy working for Russia.  All of Moreno’s narratives have been debunked.  This ‘piece’ by the BBC is titled ““Assange smeared faeces in the Ecuador embassy” says president’”

Such narratives served to dehumanise Assange and to contain his support.  Not only did it shield the US from public scrutiny, but it also enabled Moreno to promote unhinged claims by leading US politicians including Jo Biden (“Assange is a hi-tech terrorist”) and Mike Pompeo when head of the CIA  (“Wikileaks is a non-state hostile intelligence service”). It is now known that using the narratives of ‘hostile’ and ‘terrorist’ individuals inside the Trump government including Pompeo considered assassinating Assange.

Sopel reported back home on his ‘interview’, repeating the stories peddled by Moreno. He delivered the defaming and debunked stories to BBC World News which even then had a weekly audience of hundreds of millions.

We see that the BBC is the propaganda tool of choice for the British government to assault Assange.  It is on tap to the government, it can stream their false statements, it can send a team up at the snap of a Foreign Office finger, it can be relied upon to not ask intelligent questions or challenge narratives, it can feed useful lines, it can promote defaming narratives on its huge BBC World News platform, there are no stories it will not peddle: faeces, cat abuse.  All of these have been used on Assange.

Part 2 of the role of the BBC in the persecution of Julian Assange will look at:

The appeal hearing at the High Court which will decide Julian Assange’s fate has been set for Wednesday 27th and Thursday 28th October.   On Saturday 23rd October, there will be a demonstration in support of Julian Assange assembling at the BBC Broadcasting House, Portland Place at 1 pm for a march to the High Court.