By Nina Cross, from The Indicter editors’ team

Critics will make the case that Russia’s intervention into Ukraine is not about self-defence, but they are likely to be the same critics who do not believe that Russia faces an existential threat from NATO.  The problem for Russia is that it cannot rely on international law or diplomacy to protect it. International law and human rights law are clearly defunct for countries in the firing line of the US and NATO and more broadly, the Western imperialist bloc – the US, Canada, the EU, and Britain.

The imperialist Western bloc has reduced the UN principles and concept of international law to rubble and in rocketing speed since the fall of the Soviet Union.  This is not just through its illegal and relentless military aggression across the world but through its genocidal economic warfare in the form of illegal unilateral sanctions. International law, including the right to life, does not exist for those living in countries at the mercy of the US and NATO.

In view of the mounting, unhinged Western aggression towards Russia, and the failure of international law to uphold Russia’s ability to have its security and fears of existential threat taken seriously and accommodated in any meaningful way, what available means for resolution are left at Russia’s disposal?

In the same way that international law has been disappeared by the Western bloc, so has diplomacy.  It too is defunct.  It does not exist for Russia – nothing it requests is allowed.  Over years it appealed to Western leaders to accept its fear of existential threat and these fears were dismissed, no single concession being made to any of its consistent and not unreasonable demands. The three core demands were:

There were other points raised by Russia1,  many of which were likely to benefit the population of Europe as a whole.

On this basis how is Russia to respond if it has exhausted diplomatic means, and fears for its existence as a self-determined nation?

Russia’s concerns of existential threat must be recognised as credible.

In June 2017, the Ukrainian Parliament adopted legislation reinstating membership in NATO as a strategic foreign and security policy objective. In 2019, a corresponding amendment to Ukraine’s Constitution entered into force.

In September 2020, President Volodymyr Zelenskyy approved Ukraine’s new National Security Strategy, which provides for the development of the distinctive partnership with NATO with the aim of membership in NATO.

Escalations leading to the 24th February

On 21st December 2021, at a Defence Ministry meeting, Putin commented 2

“It is extremely alarming that elements of the US global defence system are being deployed near Russia. The Mk 41 launchers, which are located in Romania and are to be deployed in Poland, are adapted for launching the Tomahawk strike missiles. If this infrastructure continues to move forward, and if US and NATO missile systems are deployed in Ukraine, their flight time to Moscow will be only 7–10 minutes, or even five minutes for hypersonic systems. This is a huge challenge for us, for our security.”

The threat to Russia from the US (by default NATO) ballistic defence system is largely airbrushed from Western media but it is in reality a significant threat to Russian security.  The Campaign for Nuclear Disarmament describe the system as follows:

“…although described as a ‘defence’ system, it actually enables first-strike attacks to be made by the US without fear of retaliation. An attack can be launched and the missile defence system will block any retaliation. This ends the notion of ‘mutually-assured destruction’ – the balance of terror that is supposed to prevent nuclear weapons ever being used.”

For Russia this means the compromise of its second strike ability.  It means a nightmare scenario of being unable to retaliate against a first strike of NATO nuclear weapons.  It would entail existing in a state of heightened existential threat, intimidation and blackmail by NATO and the US.  It would mean there would be a short matter of time before a WMD type pretext would be created to justify NATO intervention, or more likely, an invasion through the Donbass.

In addition to this concern expressed at the same Defence meeting the Defence Minister Sergei Shoigu warned that Ukraine was being flooded with deliveries of US and allied helicopters, guided anti-tank missiles, other equipment and members of US private military companies.

“They are setting up firing positions in residential houses and social facilities and are preparing the Ukrainian special operations forces and far-right armed groups for active hostilities. Unidentified chemical warfare agents have been delivered to Avdeyevka and Krasny Liman for the purpose of provocations. The Ukrainian military keep up the shelling of civilian neighbourhoods in Donbass and the positions of the people’s militias of the Lugansk and Donetsk republics to provoke a response.”

Russia could see the deployment of the US defence system missiles around its territory, the amassing of military equipment and weapons in Ukraine, which has continued, something confirmed by NATO sources, and the increase in shelling in the Donbass the week before the 24th February, confirmed and reported by the OSCE. This was recorded by independent journalists who also report the amassing of Ukrainian forces on the Donbass border.  By the end of January, following failed diplomacy and the worrying claims by Zelensky regarding the non-nuclear proliferation treaty,  Russia appeared to have no legal or diplomatic means available.  Putin then recognised the Donbass regions of Donetsk and Lugansk as independent republics.  The Russian government reported that a plan showing that the Ukraine forces were about to launch an attack into the Donbass had been discovered, 3,4   indicating the weapons and forces build-up had been the prelude to an invasion. Soon after this, Russia launched its military operation to demilitarise and to denazify Ukraine.5.

Had international law and diplomacy existed for Russia, it could have avoided a military response.  Even now a phone call could resolve the entire conflict, but no Western leader or power, supposedly with all the tools of law and diplomacy, will recognise Russia has the right to exist in any form other than a compliant servant of the US and NATO.

It is incomprehensible to many that a NATO-backed nuclear attack is possible.  But the irrational and savage history of the US military and NATO must be recognised as a very real threat to humanity.

We have the lengthy list of precedents, not exhaustive, including Yugoslavia, Iraq, Afghanistan, Libya, Syria, Yemen and Palestine, brought to their knees through the mindless US and NATO military industrial profit-seeking complex and brutal adventurism, with all the reconstruction contracts and imperialist benefits they deliver.   Attempts have been made to estimate the death toll of the post 9/11 US and NATO wars and while it can never be known, it is reasonable to believe it is several million, a great many of those children. The US and NATO violence, in all its forms, is genocidal, infanticidal. The number of those displaced, disabled, orphaned, and turned into refugees is impossible to know.

The imperialist military machine indiscriminately delivers suffering upon infants as readily as it does upon the leaders it overthrows. Petro Poroshenko’s comments of 2014 show that Russian speaking Ukrainian infants have long been targeted by NATO-backed Ukrainian fascists: 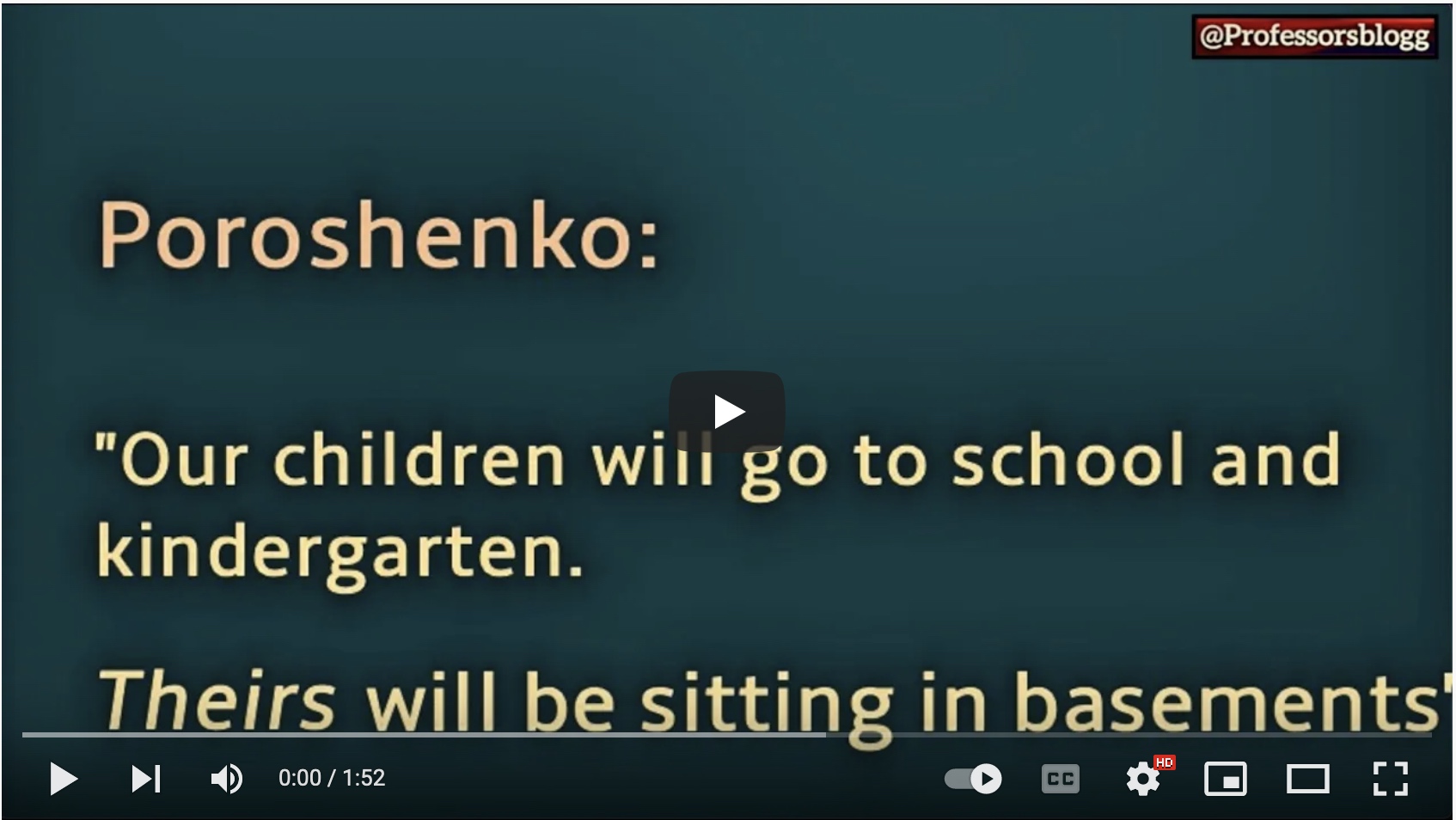 Their children will be sitting in basements

Perhaps the imperialist plan this time was to surround Russia with nuclear warheads and antiballistic missiles, and while holding a knife against Russia’s throat, the allies could abuse, exploit and rob to their hearts’ delight.  Russia would be plundered as it once was following the fall of the Soviet Union, only this time would not rise to become self-determined, but remain lobotomised and compliant, balkanised, and ravaged.

Russia’s actions in Ukraine do not reflect the barbaric military aggressions committed by NATO and the US, seen in Yugoslavia, Afghanistan, Iraq, Libya and Syria.  Russia’s operations have so far adhered to the principles of demilitarisation, avoiding civilian casualties as much as possible, providing humanitarian aid, taking in refugees and replicating its tolerance towards surrendering forces, as it was seen to do in Syria.   Nevertheless, this dire situation did not need to pass.  The imperialist military machine NATO, having destroyed international law and diplomacy and now driving a campaign of unbridled Russophobia, if left unrestrained, will turn next towards China and then any other power that does not know its place.