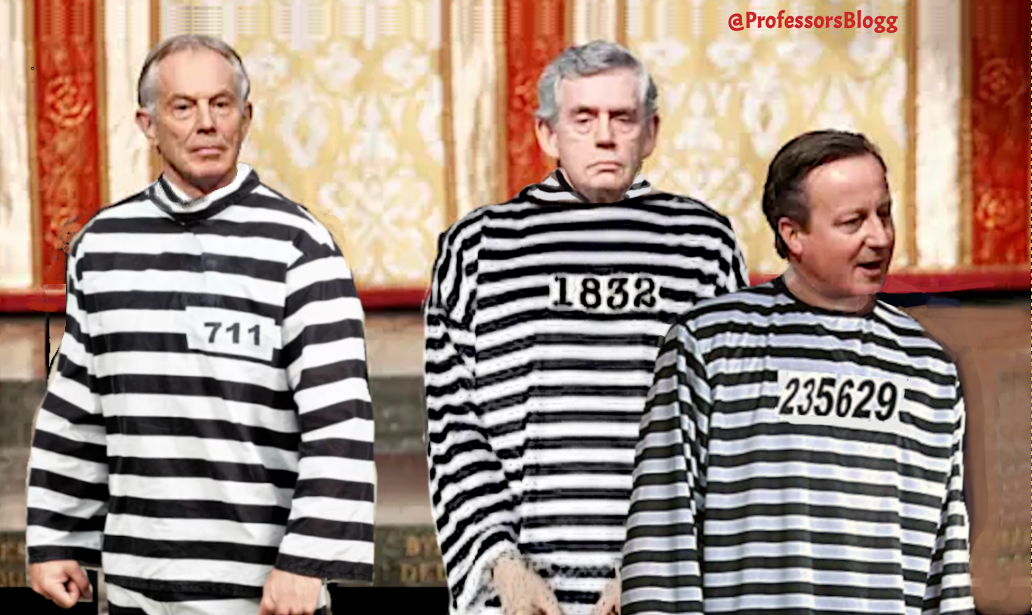 Former British leaders who should be investigated for their role in starting illegal wars are using the opportunity of the Russia Ukraine crisis to paint themselves as heroes and protectors.

Powerful British figures are using the crisis as an opportunity to remanufacture their image.  We must ask: Is it the insane level of impunity they enjoy that strips them of self-reflection? They make principled statements about peace and freedom while ludicrously blind or sociopathically indifferent to their own monstrous crimes.

While Chancellor of the Exchequer in 2003, Gordon Brown voted for the invasion of Iraq alongside his boss, Prime Minister Tony Blair.  Brown voted five times to invade Iraq and then voted against an inquiry.  Following his stint as Prime Minister, while still an MP, Brown voted for a no-fly zone over Libya in 2011 while the UK, the US and France banged the drums of war against Libyan leader, Muammar Gaddafi.

The instalment of a no fly zone was the precursor to the destruction of Libya.  Both invasions led to devastation in the Middle East and North Africa, resulting in colossal deaths tolls, displacement of millions, the spread of terrorism, and a refugee crisis that is still unfolding.

Now Brown, posing as a protector of humanity, is demanding Vladimir Putin should be charged with war crimes against Ukraine.  Along with notable individuals, Brown is calling for a tribunal to be set up, as Russia is bound to veto any resolution at the UNSC regarding such a move.

Here it should be said that if there is evidence of any alleged war crimes, this must be investigated and those responsible held to account.  Given the complete biased nature of the British corporate media towards reporting on the crisis, and the lack of any challenge whatsoever regarding statements by British leaders about Putin and Russia, any claims being made should be carefully scrutinized. It has become clear that certain evidence circulating on social media showing what are supposed to be Russian war crimes has been manipulated.  Similarly, there are reports of war crimes being committed by Ukrainian forces that are kept out of British corporate media. Scrutiny of claims is essential.

Will David Cameron give some of the donations he is taking to Ukraine to Black refugees drowning in the Mediterranean, fleeing Libya?

Similarly, Former Prime Minister, David Cameron, is suddenly a refugee hero.  This contrasts with his role as conqueror of Libya in 2011, when along with France and the US, he led a NATO aggression on the basis Gadaffi was about to carry out a genocidal attack on his people.  A subsequent Parliamentary inquiry found this to be untrue.  The invasion of Libya, once the most affluent country of Africa with free housing, education and healthcare, turned into a failed state that since then has witnessed a human slave trade of Black Africans.  It is a conservative estimate that between 2014 and 2021 22,594 people have died crossing the Mediterranean, the route to Europe from Africa being the most dangerous, to escape terrorism and conflict, the legacy of NATO’s attack.

It turns out that the Parliamentary inquiry also acted as a smoke screen. Cameron’s pretext for intervention masked the geopolitical motivation behind it, later exposed in Wikileaks’ publications of Hilary Clinton’s emails. They revealed a desire to prevent Gadaffi from introducing a gold-backed African currency, and to plunder Libyan oil.

British companies were on course to make huge profits from destroying Libya, and then reconstructing it.   In 2017, Boris Johnson, while Foreign Secretary, joked that “Libya can become a new Dubai if it can clear the dead bodies away”.

Cameron has gone on to amass great wealth, exploiting his privileges and political networks to lobby for financial gain during the pandemic.   Now the former conqueror of Libya is posing as a saviour of refugees by driving to Poland with donations for Ukrainians.

It is a great irony that the man who helped to create Europe’s refugee crisis through needless military intervention in Libya is now concerned about Ukrainian refugees but perhaps he will give some of those donations to Black refugees drowning in the Mediterranean.

Regarding Boris Johnson’s views on human rights, we need not look far either.  On becoming Prime Minister, he blocked a judicial inquiry into the British military and intelligence services after it became a matter of public record that they had been involved in programmes of rendition and torture.  Those rendered and tortured were from Afghanistan and Iraq.  It appears that white skinned Europeans pull at the heart strings of imperialists, unless those white Europeans are enemies of NATO.

Another former PM masquerading as saviour of humanity is Tony Blair: will it be a hat trick this time?

The 2016 Parliamentary Chilcot Report  concluded that Tony Blair had not told the truth about Saddam Hussein having WMDS.  He had lied to Parliament in order to launch a war on Iraq in 2003 that resulted in a body count of up to 1 million and counting.  The war led again to profitable reconstruction contracts and the pillaging of oil and other resources, as well as the weakening of Iraq, which benefited Israel and the US in terms of regional power.  Total impunity for British imperialist leaders meant that he would face no consequences either to his freedom, privileges or pocket.

But this was not his first jaunt into NATO adventurism.  In 1999, behind NATO forces Blair launched a military attack on Yugoslavia, in breach of international law and in breach of NATO’s own charter, which allowed use of force only when a member state was attacked.  The attack was again on the pretext of humanitarian intervention, again on the narrative of genocide – that was never proven.  Yugoslavia was an area of geo-strategic interest that NATO could later feast off and control.  NATO bombed civilians, it bombed the Chinese Embassy, it bombed the headquarters of Serbia’s Television Radio, it bombed a country that posed no threat to NATO allies.  Journalist John Pilger reported in the Guardian:

“The appendix pages of the Rambouillet ‘accords’, which have not been published in Britain, show Nato’s agenda was to occupy not just Kosovo, but all of Yugoslavia. This was rejected, not just by Milosevic, but by the elected Yugoslav parliament, which proposed a UN force to monitor a peace settlement: a genuine alternative to bombing. Clinton and Blair ignored it.”

In typical form, NATO crimes, launched on the back of lies, have been whitewashed and escaped justice. The judicial institutions that are supposedly independent cannot stand up to such a beast.

So now creature Blair is back for more; he can smell the blood.  Now he’s promoting NATO intervention in Ukraine.  Perhaps third time round he might finish the job he started and destroy all of Europe, if not the world.  The criminals run the jail house.