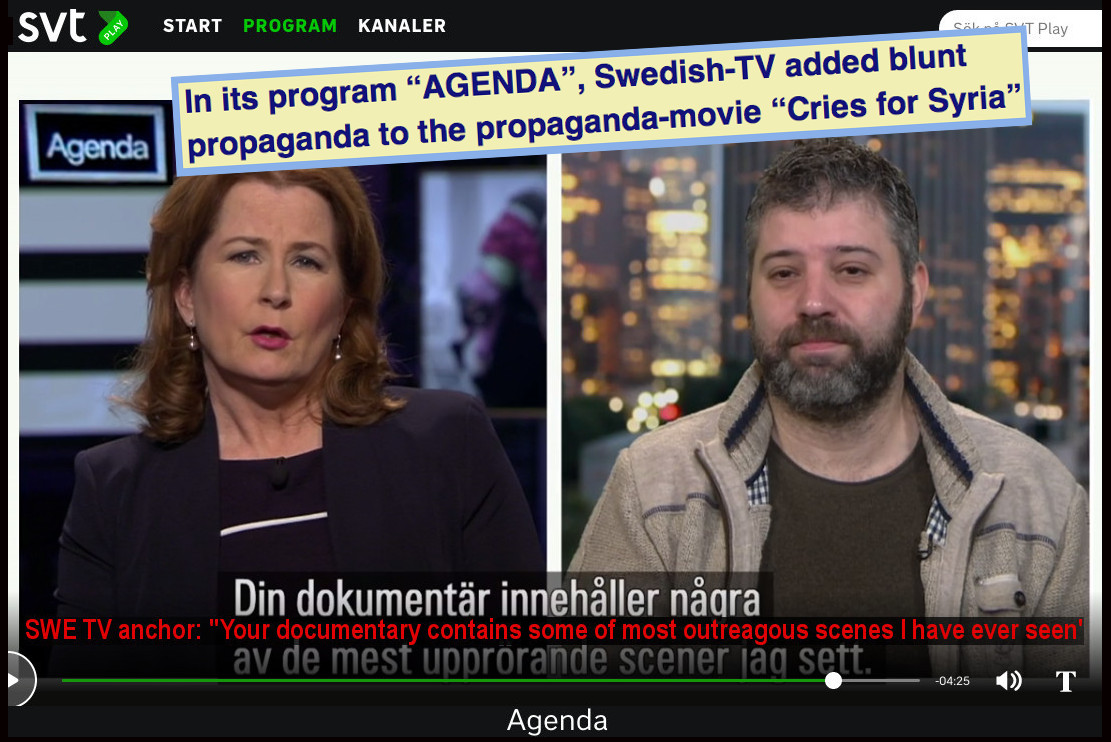 Swe TV anchor added blunt propaganda to the propaganda-movie “Cries for Syria”: “Your documentary contains some of most outrageous scenes I have ever seen”, says Anna Hedmo to Afineevsky. The Swe TV program not called “AGENDA” for nothing.

Editors Note: Just days after the propaganda movie “Cries for Syria” was released, Swedish Television had already showed it to the public. The Swedish TV main program “AGENDA” did an interview with its maker Evgeny Afineevsky and finishing with a ‘Syrian expert’ opinion absolutely condemning the Syrian government. No criticism was ever raised in the movie –or in the Swedish TV program “AGENDA”– on the fake life-saving maneuvers propagated by the “White Helmets”, or the terrorist activities of its associates at al-Qaeda, al-Nusra Front. And not one mention is done about the ‘rebels’ being financed and armed by Western powers, including Sweden (who provided White Helmets funds in a notorious award).

Well, the program is not called “AGENDA” per chance…

It is worth noticing that in an interview with Afineevsky about his movie “Cries for Syria” published in YouTube, he admitted that (interviews or scenes, not clear) were “a reconstruction”. / Prof M. Ferrada de Noli.

The Swedish State Television showed on March 26, 2017, the propaganda movie “Cries for Syria” – a film by Evgeny Afineevsky, a film-maker now operating from the United States after a period in Israel.

In my opinion, the film is ethically improper and constitutes a strong support for the terrorist organization “al-Nusra” (al-Qaeda in Syria). This organization changed its name to “Jabhat Fateh al-Sham”, and lastly to “Tahrir al-Sham”.

Below is a summary of my criticism on the propaganda movie showed by Swedish TV. For a wider context on the Syria conflict I will refer the reader to Tim Anderson’s book: The Dirty War Against Syria.

In the film, there is no criticism whatsoever of the role of the United States – well known to have been behind the proxy war in Syria. The information, sourced in the Pentagon’s official plans, was reported amongst others by the former Presidential candidate and NATO Chief: Wesley Clark.

The film do not inform on the support for insurgents and terrorists from the United States, the West, Saudi Arabia, Qatar and Turkey. For instance, the United States Department of Defence was aware of Turkey’s oil purchase from ISIS.

Non-authorized intervention in Syria, with aerial bombing and military personnel. United States and Turkey’s violation of the UN Charter and international law. These very serious crimes are not mentioned in the film.

Description of the war’s start in the Daara is one-sided, and where only the ‘rebel‘ version presented. There are, however, a variety of versions about what was really happening in Daraa. According to the opposition, they launched protests where security forces captured teenagers for just writing slogans about the uprising in Tunisia on the walls. According to Syria’s government, the protesters’ side fired against the security forces and killed several men before the security forces responded to the fire.

According to Israel news, seven police officers were killed (Gavriel Queenann, Syria: Seven police killed. Buildings torched in protest. Israel National News, Arutz Sheva 21/3 /2011). The Lebanese newspaper, Ya Libnan, stated in reference to Al Jazeera that the protesters: “burned the headquarters of the Baath party and the Town Hall in Daraa.” The Arab League reported large, peaceful demonstrations in support of the Government against the Daara.

White Helmets (WH), which has been shown to be in association with al-Nusra, and who wrongly have exploited children in their information/propaganda (also according to CNN) are presented as “heroes” in the film. This current video shows that al-Qaeda leaders thank White Helmets, after 5 minutes and 20 seconds and states that al-Qaida is beholden to al-Qaeda leaders. It is Abu Jaber al-Sheikh, head of Hay ‘ at Tahrir al-Sham (Organisation for the liberation of the Levant), also known as al-Nusra (Nusra-front) or al-Qaeda in Syria who made a speech on March 16, in occasion of the celebration of the 6th anniversary of the jihadi uprising in Syria.

The liberation of Eastern Aleppo from the terrorist organization al-Nusra and its allies is portrayed as a disaster.

It is apparent that civilians suffer. This is true, but occurs in all wars. Recently, for example, 200 civilians were killed in the bombings by the United States in Mosul.

The movie stated that all the hospitals were bombed in Aleppo. This has been argued repeatedly by Western media, but has been shown to be incorrect.

In the movie it is claimed that Syria and Russia deliberately bomb civilians and infrastructure. Evidence for this is lacking.

President Bashar al-Assad is portrayed as a cruel dictator. Polls from the West speak of substantial support for Assad. In May, NATO reported that 70% supported Assad. At the presidential elections in June 2014, 11.6 million voted, 74% of 15.8 million registered voters and president al-Assad received 88% of the vote.

ISIS is described accurately as the very brutal organization it is. But an older man in uniform claims that Assad accounted for 98% of all atrocities and ISIS only for 2%. I.e. – the Syrian Government is portrayed as worse than ISIS is. On the other hand, the movie mentions no criticism whatsoever about ISIS ideological and political jihadist twin al-Nusra (al-Qaida) operating in Syria, which is fighting against democracy, oppresses women, are religiously very intolerant and does not allow for regular school attendance.

Children are exploited in the film merciless.

* Lots of children were interviewed, saying the appropriate things, with a vocabulary that often come from adults.

* These included of course, seven-year-old Baana and “the boy in the ambulance”.

* The picture with the boy has been arranged.

Syrian experts claim that the rebels have long been dominated by terrorists, and that the “free Syrian army”, has long been cooperating with terrorist organizations. For instance, the New York Times reported that the United States backed ‘moderate rebels’ fighting alongside al-Qaeda are not mentioned.

Afterwards, the Swedish TV anchor Anna Hedmo has a talk with Leif Stenberg, who presented in the program as being a ‘Syrian expert’. He of course comments that all the experts agree that Assad is responsible for most of the destruction and atrocities in the war. No evidence for this was ever presented.

This article is a translation of a Swedish article originally appeared in Jinge.se with the title “SvT visar ‘Cries for Syria’ – propaganda för al-Qaida“

Professor emeritus Anders Romelsjö (Karolinska Institute and Stockholm University) is vice-chairman of Swedish Doctor for Human Rights and member of The Indicter editorial board. He is the publisher of one of top-ranked Swedish political blog, Jinge.se

Prof Anders Romelsjö is a co-author of the book (Swedish) “USA as World’s Police”.