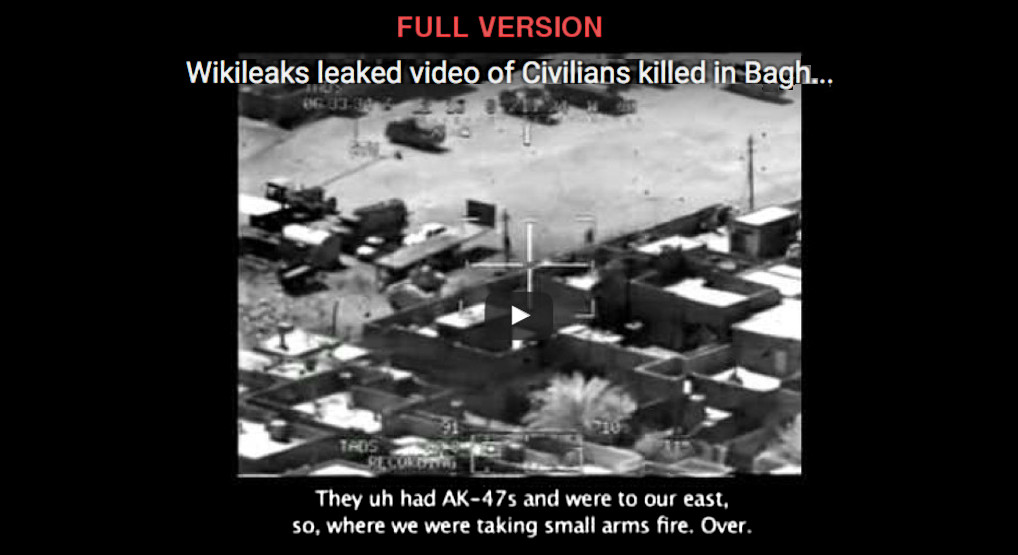 By Nozomi Hayase PhD Member of The Indicter Editorial Board Above, Wikileaks-video “Collateral Damage”. Only this upload by Sunshinepress (there are several others uploads) seen already by over 15 million  among English-speaking Youtube viewers. It produced a markedly change – or statistical significant –  in the public attitude towards the occupation wars in the Midle […]

Member of The Indicter Editorial Board

Above, Wikileaks-video “Collateral Damage”. Only this upload by Sunshinepress (there are several others uploads) seen already by over 15 million  among English-speaking Youtube viewers. It produced a markedly change – or statistical significant –  in the public attitude towards the occupation wars in the Midle East and Afghanistan. See the full version (and also a brief version) in the site COLLATERAL MURDER

On April 5, 2010, WikiLeaks published classified military footage of a July 2007 attack by a US Army helicopter gunship in the Iraqi suburb of New Baghdad. The video titled Collateral Murder depicted the killing of more than a dozen men, including two Reuters staffers. At the time of release, the WikiLeaks website temporarily crashed with a massive influx of visitors, while versions popped up on YouTube, reaching millions.

The importance of The Collateral Murder video has often been talked about from the perspective that it provided visual evidence of unaccounted US military power and brutality. Now, on the 6th anniversary of its publication, we will revisit the emergence of WikiLeaks in the public consciousness and explore the significance of this video release for the advocacy of free speech.

In reflecting on this groundbreaking public debut, journalist Greg Mitchell noted, “now WikiLeaks had fully arrived – as a concept, as an organization, as a media fixture in America”. Along with the apparent war crime, the uncensored images of modern war alerted people to the lack of government transparency and stifling of free speech in the very country that claims to hold a torch for such things.

Former US Foreign Service employee, Peter Van Buren pointed to several fronts where the government has assaulted the First Amendment. Examples include the weakening of The Freedom of Information Act (FOIA) that was originally created in 1966, the gutting of whistleblower protection, along with the recent unprecedented crackdown on truthtellers. In fact, this WikiLeaks publication revealed this trend. By using the Freedom of Information Act, Reuters attempted to obtain the footage of these airstrikes from the US Army with no success and it wasn’t until WikiLeaks released Collateral Murder that they were able to access this information regarding the killing of their journalists.

The smothering of free speech has cost the public access to the real images of war. Back in the 1960’s, during the Vietnam War, pictures of wounded soldiers and dead civilians flooded through televisions into American homes. Unlike the current situation, the government had not yet learned to keep the press out of war zones, where all could see the horrific images of what in many cases amounted to war crimes.

Brazilian educator Paulo Freire (1970) described two types of words as two opposing forces. “Human existence cannot be silent,” he wrote. “Nor can it be nourished by false words, but only by true words, with which men transform the world” (p.76). These honest images of war were true words that have immense power to alter reality. Indeed, a sensational AP photograph of a naked Vietnamese girl running with her body burnt by a US napalm attack that got on the front page of every newspaper outraged the American people, contributing to ending that war.

Now, these real images are crucified on the cross-hairs of the corporate media lens and government control. They are being blocked or turned into snapshots that conveniently carry one-sided official narratives, with crimes covered up by euphemisms. The WikiLeaks publication of this 2007 aerial footage lifted the gate of public perception that had been tightly guarded through secrecy and media manipulation.

The video opened with a quote from George Orwell; “Political language is designed to make lies sound truthful and murder respectable, and to give the appearance of solidity to pure wind”. Transcripts within the footage presented facts about the incident; “On the morning of July 12th 2007, two Apache helicopters using 30mm cannon fire killed about a dozen people in the Iraqi suburb of New Baghdad. Two children were also wounded. Although some of the men appear to have been armed, the behavior of nearly everyone was relaxed”. Then a narrative followed that quoted the US Army’s response to the attack, stating “all the dead were ‘anti-Iraq forces’ or ‘insurgents’”.

What was brought to life in this grotesque image of horrific death was the voice of dissent, which until that time was suppressed by institutional hierarchies. This was the voice of whistleblower Chelsea Manning, who was sentenced to 35 years in prison for releasing the largest trove of secret documents in US history. At her pretrial hearing in 2013, Manning spoke about the facts regarding the incident in New Baghdad in her own words. After identifying the second engagement in the video of the unarmed bongo truck taking the kids to school and the attitudes of the soldiers in the helicopter as “the most alarming aspect of the video”, she described it as “seemingly delightful bloodlust” and noted how it appeared to be similar to a “child torturing ants with a magnifying glass”.

Blips and whirs of radio distortion slowly occupied silence. Images that were freed began to move, momentarily intercepted by a still slide of official lines, so viewers could engage critically with the plain colorless scenery shot from an Apache helicopter gun-sight.

This previously unreleased video footage called all to witness the everyday life of the brutal military occupation of Iraq. In the 17 minute film, we were all given an opportunity to see with our own eyes who those labeled as enemies in the ‘War on Terror’ really were –a group of adults and children trying to defend themselves from being shot and journalists risking their lives to do their job. At the same time, it invited Americans to see themselves and their roles in this scenery unfolding in a distant land.

In an interview with Raffi Khatchadourian of The New Yorker, WikiLeaks editor in chief Julian Assange described how before deciding on the title Collateral Murder, he had considered naming the short commentary film “Permission to Engage”. This video with transcripts and a package of supporting documents released on April 5, 2010 provided the claim by US military authorities that the actions of the soldiers and pilots involved were in accordance with the law of armed conflict and its own “Rules of Engagement”.

The radio transmission audio catches the line of ruthless weaponry when voices of the copter crew came through; “…Yeah Bushmaster, we have a van that’s approaching and picking up the bodies” …. “Let me engage. Can I shoot?”,“Roger. Break. Uh Crazyhorse One-Eight request permission to engage”,“Picking up the wounded?”,“Yeah, we’re trying to get permission to engage”,“Come on, let us shoot!”

The carnage enacted in this raw footage calls us to question these rules of engagement, and most importantly who gives these soldiers permission to engage in such airstrikes killing civilians in countries that are clearly no threat to the US.

Militaries that operate under the nation-state premise are said to act on behalf of the interests of their people. In the case of the US military, the President acts as commander in chief for the entire army. So, ultimately he granted the aerial weapons team permission to engage the van in the square with open fire – to murder in the name of ‘God and country’. A government based on the idea of consent of the governed requires informed citizens and for this, unfiltered information is critical for people to make informed decisions. Those who govern, with over-classification of information and dismantling of basic free press have been keeping citizenry in the dark and preventing them from participating in these vital decisions.

WikiLeaks as a creative application on the Internet has enabled the right of people to freely speak; speech that challenges authority, speech that questions its legitimacy, especially when such an act has become so dangerous. Through Manning’s brave act of conscience, a lost image was resurrected – true words through which ordinary men and women everywhere can transform the world. This made it possible for people to engage in determining the legitimacy of authority and begin withdrawing consent whenever necessary.

Soon after the video release, Ethan McCord, one of the soldiers on the ground at the scene of the shooting came forward to write an apology letter to the Iraqi people. With heavy hearts, two former soldiers from the Army unit expressed their deep sorrow and wish to repair the damage their country had caused. Icelandic collaborators on the video release traveled to Baghdad to meet the family of the victims of this attack to seek for justice. Debate and discussion that was sparked began to dissolve apathy and callous disregard, replacing it with genuine interest and concern for others. In the eyes of many, this video came to be seen as having turned the tide of the war in Iraq.

Now, on this six year anniversary, let us celebrate the publication of Collateral Murder as a historical renewal of free speech. In 2010, on the day after Easter Sunday, the act of posting such a video online instigated a free flow of information on the ether, giving an everlasting effect of letting people see the other side of the story that had been buried by the official narrative.

This iconic film continues to remind us of all those who risked their lives for free press and also of the power of free speech; that our collective engagement with the truth can set frozen images into motion. By seizing the present, we can intervene in the course of that one fatal day and alter the running footage of the past, bringing each person one step closer to self-determination of their own future.

This article appeared originally in CommonDreams