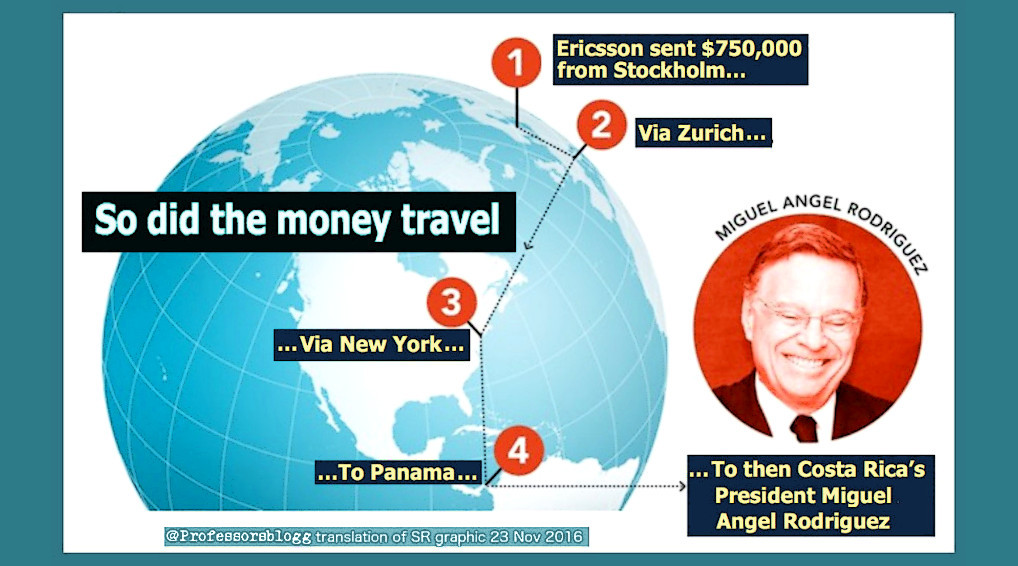 A $750,000 payment was allegedly routed from Stockholm through an Ericsson’s shell company in Zurich, to New York and Panama, to the then President of Costa Rica. Original graphic [Swedish] by SR.se By Prof. Marcello Ferrada de Noli, Chairman, Swedish Doctors for Human Rights – SWEDHR. I have recently reported in ‘The Indicter’ and ‘Global […]

A $750,000 payment was allegedly routed from Stockholm through an Ericsson’s shell company in Zurich, to New York and Panama, to the then President of Costa Rica. Original graphic [Swedish] by SR.se

I have recently reported in ‘The Indicter’ and ‘Global Research’ of a payment made by Swedish giant corporation Ericsson, to the Clinton foundation. I have also reported separately the intervention of this company in Haiti – which had disastrous consequences for that country’s economy, as reported in a US Embassy cable from Port-au-Prince to the State Department [see document-excerpt below].

The revelations regarding unethical transactions in a variety of corruption investigations around Ericsson indicate, in my judgement, that this Swedish flag company might have pursued systematic bribery, internationally.

The new exposures are in relation to previous Costa Rica President Miguel Angel Rodriguez over the tendering process for a major telecommunications contract in that nation. The revelations are partly based on the testimony of a former employee at the company, Liss Olof Nenzell, who was in charge of “sensitive payments”. The report adds that government ministers as well as executives of Telecom companies received Ericsson’s payments.

Reports of the exact sum allegedly sent by Ericsson to Miguel Angel Rodriguez vary in the Swedish media. While ‘Swedish Radio’ puts it at $750,000 [See graphic above], ‘The Local’ (Carl Bildt’s megaphone) mentions the significantly lower amount of $271,245. Rodriguez denies the existence of bribes; he admits, nevertheless, “having links” to the mentioned bank account in Panama.  Former Costa Rica’s president Rodriguez was a staunch supporter of the UN invasion in Haiti. Following that invasion, Ericsson obtained extended credits in Haiti; that, according to a document declassified by the US State Department, contributed significantly to the decline of the economy of that country.

Swedish ‘Ekot’ was the first to break the news of Ericsson’s operation in Costa Rica, but have garnered additional attention in today’s Swedish press. The same shell-company in charge for forwarding the Ericsson payment to Costa Rica’s ex-president Rodriguez (while he was in office), is now linked by the Swedish press to other suspected payments in Argentina, Brazil, Colombia and Venezuela.

Furthermore, the Swedish giant corporation Ericsson is currently under investigation for other suspicious transactions in, China, Romania and Uzbekistan, and Greece. See below the English version of a graphic published in DN illustrating the money flows from Ericsson.

DN confirms that the payments were done by intermediary agencies located in Switzerland. They received between 1 and 3,5 percent for the use of their company-names in the transactions they did on Ericsson’s behalf. Below is a partial translation of a graphic published in DN illustrating other 15 countries implicated, or “engulfed by this Swedish bribe machine’, and the respective amounts received (in SEK).

Updates on this report will follow as the story evolves.

The author: Professor Dr med Marcello Ferrada de Noli is the founder and chairman of Swedish Professors and Doctors for Human Rights and editor-in-chief of The Indicter. Also publisher of The Professors’ Blog, and CEO of Libertarian Books – Sweden. Author of “Sweden VS. Assange – Human Rights Issues.” His op-ed articles have been published in Dagens Nyheter (DN), Svenska Dagbladet (Svd), Aftonbladet, Västerbotten Kuriren, Dagens Medicin,  Läkartidningen and other Swedish media. He also has had exclusive interviews in DN, Expressen, SvD and Aftonbladet, and in Swedish TV channels (Svt 2, TV4, TV5) as well as international TV and media.