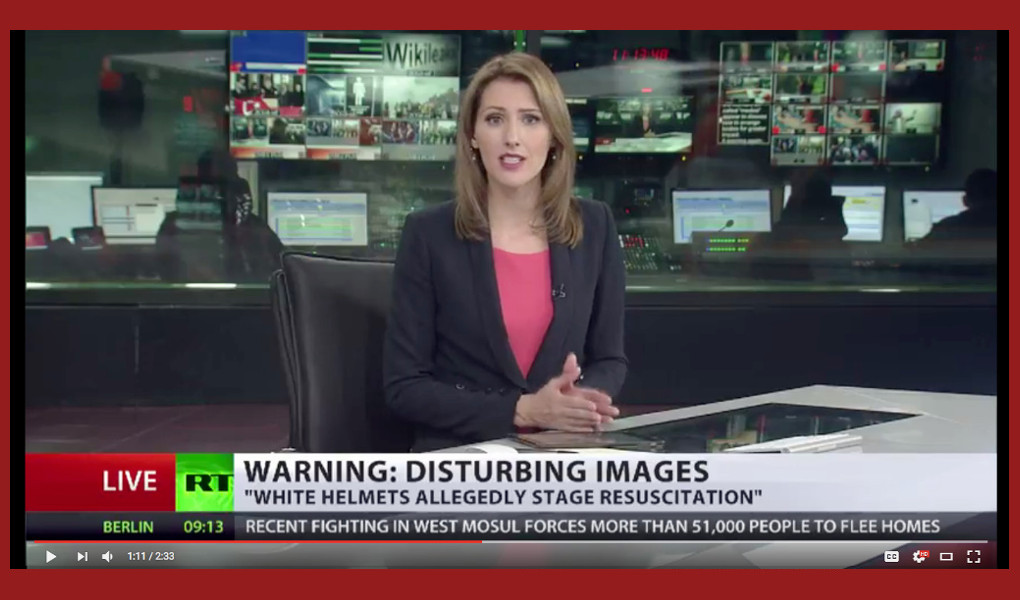 By Prof Marcello Ferrrada de Noli, SWEDHR chairman. The Russian network RT asked the SWEDHR chairman for an interview regarding clinical and other findings I had reported after the SWEDHR examination of a video published by the White Helmets. The report “White Helmets Video, Macabre Manipulation of Dead Children and Staged Chemical Weapons Attack to […]

The Russian network RT asked the SWEDHR chairman for an interview regarding clinical and other findings I had reported after the SWEDHR examination of a video published by the White Helmets. The report “White Helmets Video, Macabre Manipulation of Dead Children and Staged Chemical Weapons Attack to Justify a ‘No-Fly Zone’ in Syria” had wide spread in social media as well newscasts of important international media reporting the Syria conflict. A separate report on this coverage is published in SWEDHR Research & Reports.

The RT interview, aired in English on March 8, was also broadcasted by RT in Germany, the same day. The day after, I received a request sent by Mr Hebert Hackl, science-journalist at BR-Television Verification Team – ARD/BR Television/Arte/3sat, asking my opinion on the possible occurrence of misreporting from the part of RT in airing the interview. A video [English] of the newscast was published by RT in YouTube. Click on the image to watch the video.

Your investigative unit at BR-Television / ARD in Germany has reacted to a news broadcast by RT (March 8, 2017) on the subject “Swedish doctors: White Helmets’ life-saving measures are staged and dangerous”, and which included an interview with me in my capacity of chairman of Swedish Doctors for Human Rights (SWEDHR).

In your communication to me of March 9, 2017, heading subject “German Television ARD Verification White Helmets”, you wish to know to which extent would compatibility vs. contradiction exist between what I declared to RT during the interview and what it was said by RT during the sending.

Since the task that occupies your unit at BR-Television / ARD in Germany, as you wrote, “is to reveal fake news and clarify the reliability and sources of photos and videos”, I infer from you message that you aim to asses whether RT would be here indulging in a case of “fake news”. Here below my comment:

Why would BR-Television / ARD verifying unit be more interested in trying to establish whether what I told to RT matches the phrasing RT used in the sending, instead of investigating the main issue exposed in our findings and by RT, namely, the ostensibly malpractice, fake procedures and outrageous use of defunct infants done by the White Helmets for propaganda ends? I mean, the relevant issue of content here for professional endeavours like yours should be to verify if such malpractice have occurred, and investigate why they have occurred, in which political context have occurred, etc.

Paradoxically, the first issue that you –perhaps inadvertently– are arising here, and for the public’s concern, is whether BR-Television / ARD has ever investigated the existence of fake news in the White Helmets propaganda spread in Europe by, for instance via CNN or German TV outlets. In concrete, about these video segments on behalf of the White Helmets “No-Fly Zone” campaign that CNN broadcasted for international audiences, including Germany, April 20, 2015.

In that occasion, CNN aired the segments of videos that White Helmets published in YouTube March 16, 2015. The CNN footage corresponds to the same scenario shown in the video we analysed. The CNN footage is identical to the uploads carrying a logo with a Shahada flag, which –according to a communication from European journalists with contacts inside Syria– it has similarity with those of early Al Qaeda/Nusra Front formations operating in the same front. In the three uploads the same staged ‘life-saving’ scenes’ were repeated.

Furthermore, CNN –as mentioned in this video we have recently uploaded– commented there that such material has been showed [at the UN Security Council] against the backdrop of the campaign for a No-Fly Zone waged by Syrian doctors. In fact, White Helmets waged the campaign in conjunction to other jihadist organizations operating in the area. The video material presented at the UN meeting contained fake ‘life-saving’ acted on presumably dead children. Amidst the emotional impact of the scenes shown in the White Helmets video, no one thought to question its veracity. Was it not a unique opportunity for BR-Television / ARD verifying journalism?

You provided me with an article in German, and a link to the RT video broadcasted in Germany, which audio is simultaneously interpreted from English into German, so the English voice in the background becomes at times inaudible.

I am not knowledgeable in German, however, the same RT video was published in full English in YouTube (“Marcello Ferrada de Noli talks to RT about White Helmets in Syria.” The broadcast-clip is identical to the one you linked.

Listening to what the anchor says in the RT video, I can affirm that there is congruence between what she says and the statements that I and/or my colleagues at Swedish Doctors for Human Rights have done.

It should be relevant to your review to consider the following facts:

Regarding your first question, “Did you really watch the scenes by yourself or did someone just tell you about the content?”

I must say that I find your question to be preposterous. I have never heard, and I believe no one in Sweden has ever heard, of a Swedish professor giving statements in public media on the base of some journalist “telling you about the content”. In Sweden is the other way around: Professors and other academic researchers publish their investigation, and subsequently they would tell on its content to interested journalists that would be asking on those results.

Of course, I really watched the scenes by myself. And so did, separately, each of my colleagues that submitted their conclusions. The source of the video material used in our analysis is indicated with detail in the section “References and Notes” of the above-named The Indicter article. The link indicating how to obtain online the original video brand-marked with the White Helmet’s logo was also provided.

Likewise regarding your second question, “Would you say you have watched the original footage (with no comment) or was it already edited?”

The footage that we examined was the original one uploaded by White Helmets (‘Syrian Civil Defence, Idlib’). It had no embedded comments. We obtained a translation into English of the audio.  In the analysis we focused on the ‘life-saving’ procedures showed in the footage. We at SWEDHR have also examined other similar footage published by the White Helmets on the Sarmine alleged episode, and other events.

If –before to inquire as you do here on whether there is a lack of correspondence between the RT report and what is my true position on the issues in the interview– you would have care to find out what I have published on this subject, you would have found the above-mentioned article, and other posts also online, were my conclusions on the unethical manipulation for propaganda aims conducted by the White Helmets are stated.

Finally, I take notice that, at the same time that you apriori assume that fake-news would exist in the RT report with regard to my interview, you did not care to concretely point out what those contradictions would have been. With due respect to your outlet, let me tell this: Those are the kind of prejudices that lead to the production of fake-news.

For the sake of transparency, I am forwarding this text to the BR-Television /ARD editors, to the RT team that conducted the interview, as well for publication in The Indicter.