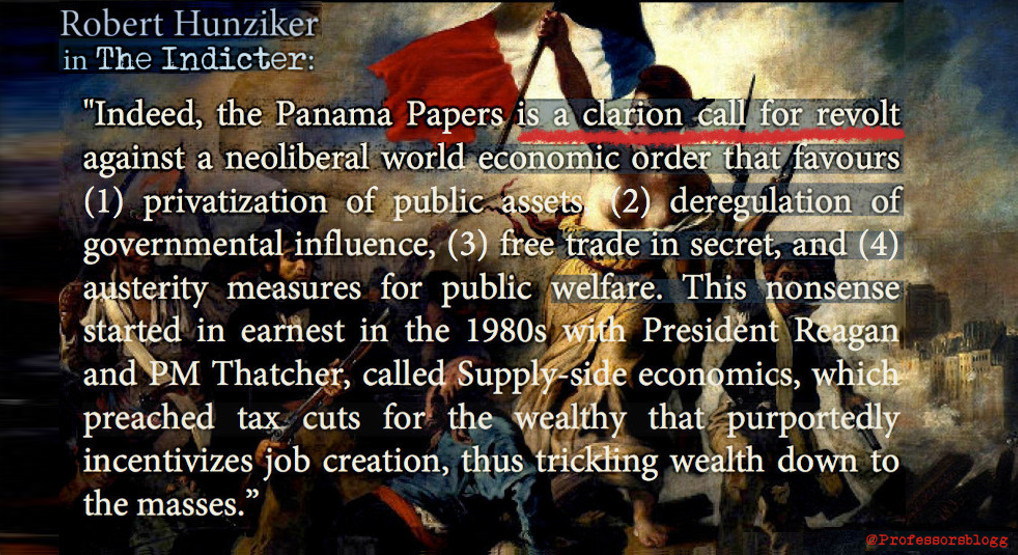 . By Robert Hunziker, MA in Economic History. The Panama Papers, a one-year investigation by over 100 reporters worldwide (The International Consortium of Investigative Journalism) of offshore money hiding/laundering/taxation avoidance, is a cause célèbre of underhandedness seldom, if ever, revealed to the world’s public. It is comparable to lifting a rotting log in the woods […]

The Panama Papers, a one-year investigation by over 100 reporters worldwide (The International Consortium of Investigative Journalism) of offshore money hiding/laundering/taxation avoidance, is a cause célèbre of underhandedness seldom, if ever, revealed to the world’s public. It is comparable to lifting a rotting log in the woods and finding an active nest of millipedes, red worms, and cockroaches scampering about to escape the bright sunlight. They can’t stand the sunlight because darkness is their life.

Remarkably, it may only be the tip of an iceberg, a big one, as the incident references the Panamanian law firm Mossack Fonseca & Co. There are likely many more in the world of behind the scenes finance.

The Panama Papers, containing info on thousands of shell companies set up to avoid taxes and hide assets for over four decades from 1977 to 2015, are all about millionaires and billionaires and the politically connected “sticking it to” average citizens of the world by hiding money from fellow countrymen’s taxation policies and/or theft of state funds and laundering money. It is outrageously heinous and deserving of criminal incrimination and/or tarring and feathering whilst run out of town on a rail. It also begs the question of how many more rich pillagers are out there.

Already, major worldwide figureheads, like the PM of Iceland, have fallen. “As much as $21 trillion in global wealth is hidden behind largely-untraceable shell companies such as those exposed in the Panama Papers, according to watchdog group Financial Accountability and Corporate Transparency Coalition,” (NBC News, April 6, 2016.). Twenty-one trillion is considerably larger than the entire U.S. economy. And, if it were taxed, which it is not, it would relieve many nation-states of big deficit spending for social welfare programs.

Indeed, the Panama Papers is a clarion call for revolt against a neoliberal world economic order that favors (1) privatization of public assets, (2) deregulation of governmental influence, (3) free trade in secret, and (4) austerity measures for public welfare. This nonsense started in earnest in the 1980s with President Reagan and PM Thatcher, called Supply-side economics, which preached tax cuts for the wealthy that purportedly incentivizes job creation, thus trickling wealth down to the masses. Problem is, after more than 30 years, all of the wealth gushed upwards whilst wages trickled down. The exact reverse of how it was sold to the American public. Politicians, mostly Republicans, continue making the same lame claims today. Cut taxes to create jobs is their mantra. Well, what they really mean to say is “cut taxes to cut wages” because that’s how it works in real life.

Frankly, the Average Joe has been getting shafted, hosed, bamboozled for decades. Now, the results are exposed in full living color. Billions if not trillions of stolen money and hidden assets removed from the public domain to enrich a few already rich people. This is as low as lowliness gets; it’s below scum.

Even though the Panama Papers detail unethical and illegal behavior mostly outside of the United States, it is also well known that rich Americans, especially hedge funds, have trillions stashed offshore in the Caribbean. No worries, no taxes.

“Rich individuals and their families have as much as $32 trillion of hidden financial assets in offshore tax havens, representing up to $280 billion in lost income tax revenues, according to research,” Super Rich Hold $32 Trillion in Offshore Havens, Reuters, July 22, 2012. This enlightening discovery was four years ago, well before the recent Panama Papers incident.

After enough time, it’s nearly impossible to conceal something on such a large scale as the pandemic hiding of money and assets. It’s encyclopedically wide-ranging, ubiquitously far-flung.

As for the revelation of four years ago, “The study estimating the extent of global private financial wealth held in offshore accounts – excluding non-financial assets such as real estate, gold, yachts and racehorses – puts the sum at between $21 and $32 trillion,” Ibid. But, how much additional are the RE, gold, yachts, and racehorses worth? Nobody knows.

It’s worthwhile noting that $9.8 trillion of the total is just 92,000 people or 0.001% of the world’s population. The majority of these people are operating accounts through three big banks, UBS, Credit Suisse and Goldman Sachs (Source: Reuters).

So, how does neoliberalism, or today’s socio-conomic order, dovetail into the Panama Papers scandal?

[Above, screenshot from Commondreams]

Neoliberalism is the legal equivalent of the Panama Papers.

It robs the public legally by changing regulations, trade policy, and taxation to enrich the wealthy class at the expense of the middle/lower. For example, America’s “15% carried-interest” taxation rate available to people like Mitt Romney but not available to his gardener. This is joylessly known as “reverse Robin Hood economics,” or taking from the poor to enrich the rich, and it works miracles, just look at how rich Mitt has become and at how his gardener’s wages suck dust.

The NAFTA trade agreement is another example of stealing from the lower/middle to enrich the rich by automatically undercutting America’s unions. “The A.F.L.-C.I.O. released a report excoriating Nafta and highlighting its deleterious effects on the labor market… Nafta increased corporate profits while depressing wages,” (Nafta Still Bedevils Unions, New York Times, March 27, 2014).

NAFTA has been hollowing out unions since 1994.

Neoliberal policies are legally as heinous as the Panama Papers are illegally disgusting. One is legal robbery, the other illegal theft. Both achieve the same end result, taking from the lower and middle classes to enrich the wealthy. There are endless examples of how this slight-of-hand is legally constructed by Congress, worthy of a 200-page thesis.

And, Bernie Sanders knows all about it. His popularity is largely based upon exposing the tricks of the trade of the plutocrats. Citizens United essentially put a “for sale” sign up in front of the nation’s capitol.

Even though the Panama Papers and neoliberal policies achieve the same end result by using different means, after decades of so few rich people gaming the system and building estates filled with butlers and household servants a la 18th century Versailles, it begs the question of when this silliness ends? Sure, the French Revolution beheaded them, but that’s long ago, 225 years ago.

Nowadays, the neoliberal revolution is embedded into the socio-politico-economic fabric of society. How to overturn it is the question of the century because civilized society is not likely into beheadings like the late 18th century when nearly 16,000 aristocrats, men of cloth, and lords were publicly beheaded. Back in the day, the French people finally had their fill of rich grandstanding by a few wealthy whilst ordinary people starved in the streets. They could not take it any longer. They killed’em. Still, a lot of aristocrats fled to England.

Some American intellectuals like Chris Hedges believe the public should/will revolt. “Hedges’ message is clear: Popular uprisings in the United States and around the world are inevitable in the face of environmental destruction and wealth polarization.” (Source: Wages of Rebellion: The Moral Imperative of Revolt, Truthdig.com).

“Inevitable in the face of environmental destruction and wealth polarization” somehow fit together like peas in a pod; maybe because both originate from the same greedy, rapacious, devouringly insatiable thirst for opulent riches, at any cost. And, it’s proving to be a badge of cowardliness.

This article appeared in Counterpunch 8 April 2016. Published in The Indicter in agreement with author Robert Hunziker.

The author: Robert Hunziker earned an MA in economic history at DePaul University. He lives in Los Angeles and can be reached at roberthunziker@icloud.com